Hi! My name is Jiri Adamec and I want show you how I created Afro head and give you the inspiration to create similar or even better pictures.

One year ago I saw a tutorial of a head at http://www.secondreality.ch/. And my style of modeling isn't so different. One of the basic rules is: the model should have around 99 percent four-sided polygons. And edges of the model need to flow along wuith the skull and face muscles.

There are several good techniques of the modellings of the head and every one have something best.

I prefer this technique of the gradual wraped-up details because I work with the whole model and I have continual control on other parts than I'am modeling now. 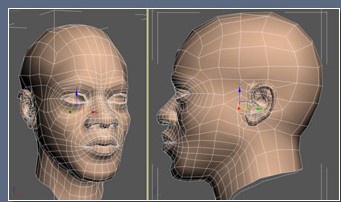 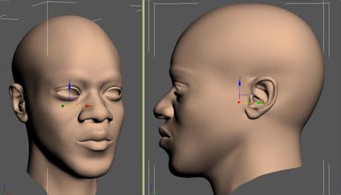 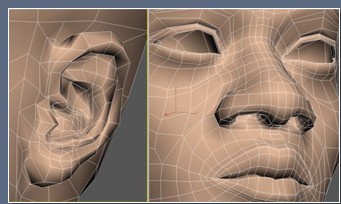 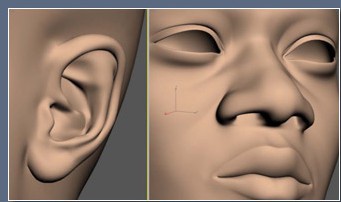 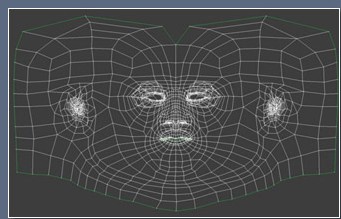 I used Sherpical mapping and then adjuste in uvw unwrap - mainly with using of the Soft selection.

I mapped only one half and I used before it modificator Symmetry. After the Symmetry I indicated one half mirrored, turned up and put together with implement Weld. And the outcome you can see here.

I used high-res textures from www.3d.sk. I would like to thank for these top-quality textures, because without them I'd have double the ammount of work. Final bitmap was 4800x3200. I've made textures for Bump, Specular, Specular color, Diffusion, Sub surface. 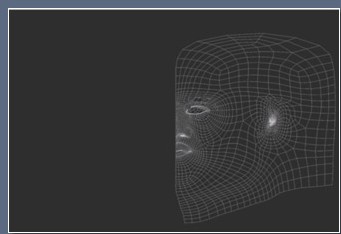 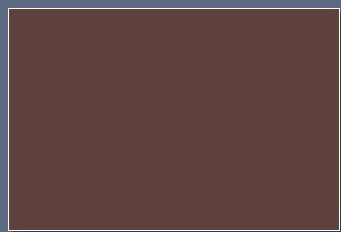 At adjustment of the basic texture (color) I worked with drawing-tablet from Wacom and with functions: Brush, Clone,
Stamp, Patch, Dodge and Burn tool. Firstly I aquired an unwrapped wireframe, I used the free plugin Texporter for this. Secondly I filled out a new layer with basic color. Thirdly I opened front view of the black-man into the next
layer and I opened the left view into the last layer. 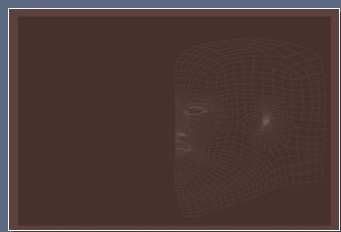 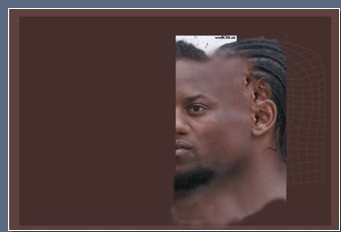 I shift front view - it must fit with the wirerame. Then I shift left view - it must fit with the front look. On the left
view I erase redundant texture with the eraser. In the place of the connecting line between both faces, I use eraser with soft hardness. Step by step I overlay the 3/4 view (middle image below). This view between both maps is the most important. Therefore I adjust color and lights reflections at the left view with the 3/4 view without using the Clone stamp, this gives a more realistic result. 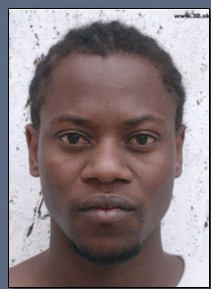 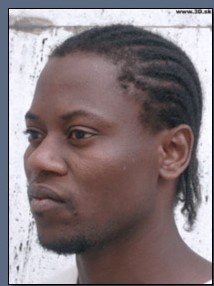 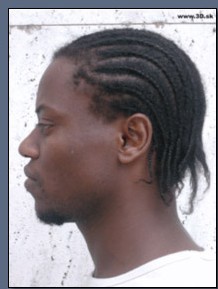 Finally I merge the both layers and then I must work with iron at the connecting line; e. g. when I make a beard or improve the connecting line I use other photos of the black-man from the others angles - I sketch in the texure so that it looks more real. Then I make the so called repeating texture. This texture I create with the mix of differents parts of the skin from the face and I copy it on the top of the head, ears, scruff of the neck, etc. Step by step, I repaint, make lighting or darken the place where the maps overlay badly together. If I am satisfied I make the mirror copy. Then I redraw the connecting line on the texture and (on this second half)
make the changes of the skin which I copied here from the other views of the textures. I make one final layer out of all those layers and the basic (color)map is finished. 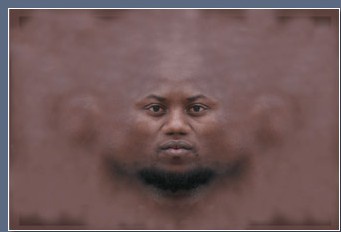 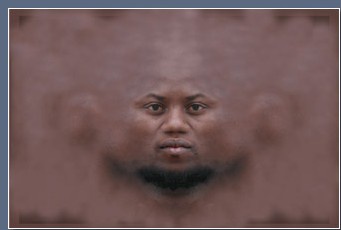 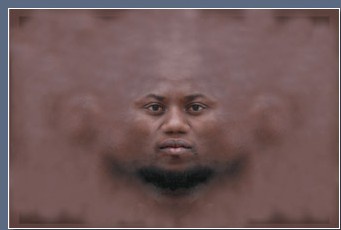 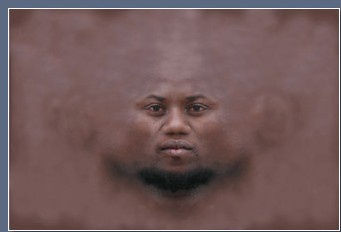 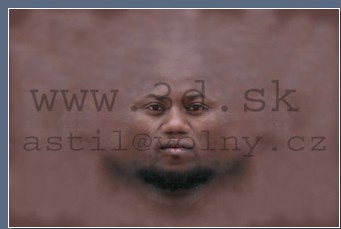 Now we take a look the others maps which I adjusted from the color map.

At first you can see the map Color (left), then Bump and Specular (below). At the adjustments of the Bump and Specularmap I used Brightness-contrast, Curves, Levels and Color Balance in the Photoshop 7. The adjustment of the bitmap is completed several minutes' time. Only the Bumpmap is contrasted for certain dermatic defects and I blur some parts around the eyes which I dont't need there.

The general adjustment of this map isn't so difficult, not even for me - and I'm not a skilled 2d artist. 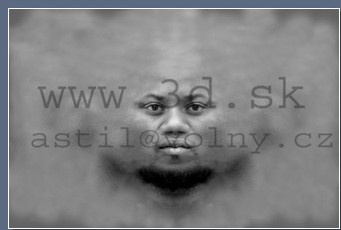 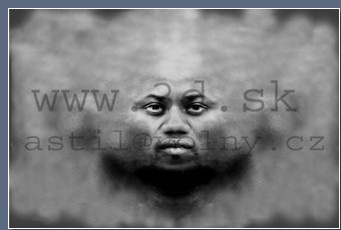 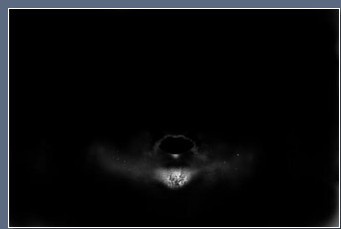 Shag fur: Rust and the next limitations are influenced with the map - I adjusted it from the previous maps. I must adjust it a lot so that the beard would grow how I want. Firstly I used the function Invert and then I painted (colour RGB 0,0,0) those parts where the beard shouldn't be. I increased the contrast even more and redraw the parts, where the beard is much regular. I used presetting/before regulating/ Wet media brushes on it - I tweaked the settings a bit. 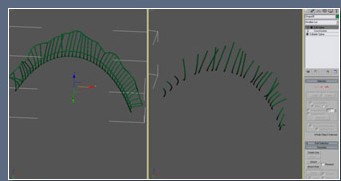 After Meshmonth I chose the eye's line and create a spline from it. I copied it twice and tweaked according to the lashes. In the end I used the cross section modifier, then I deleted unwanted splines and modified the remaining lashes.

I'm using Splutterfish/Brazil 1.03 on the rendering and it's big advantage are the materials. On the skin I used Wax shader - it's a good great shader when combined with quality bitmaps. I'm curious how the Skin shader in Brazil 1.2 will look. I use Tiling maps and Brazil velvet material on the cap and clothes. 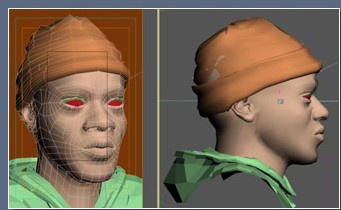 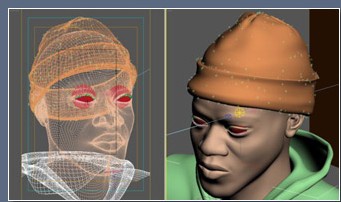 Resulting render I did in 3dsmax 5. Rendering was done in Brazil 1.03. The scene was lighten with the hdri map and with one light.
I'd like to thank the Splutterfish team that they created an excellent tool which - to me, as a 3d graphic designer - help to the produce higher quality work. 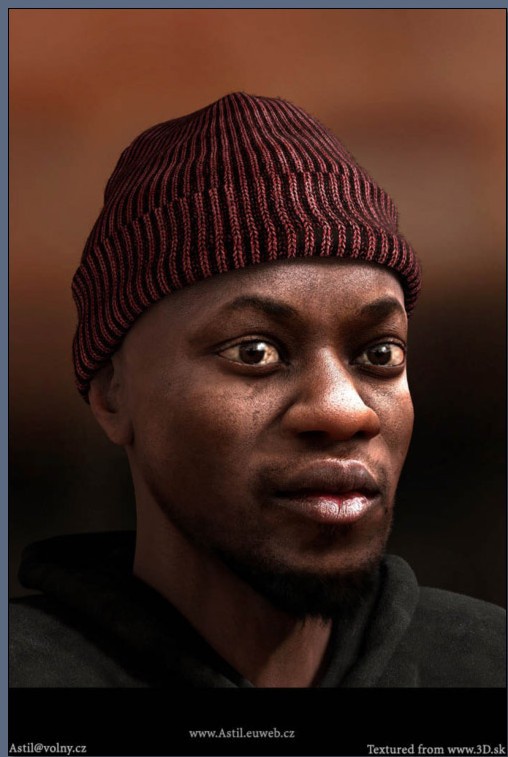 The resulting rendering time run on the 2x2,2 Athlon MP,1GB Ram was about 10 minutes.
Afro man is for sale: www.turbosquid.com/HTMLClient/Search/Index.cfm/FuseAction/ProcessSmartSearch/istIncAuthor/Adamec/