In this tutorial I will show how I approach an inked illustration or concept. The theme in this case is a boat that somehow was abandoned and forgotten for a long time. Eventually a man passed by discovering what now is a pile of rotten wood, lying at the base of a giant tree.

For the drawing I used a light grey marker and a black fineliner marker for the thumbnails, a pencil for the rough sketch and fineliner markers for the final drawing (sizes 0.3mm, 0.5mm, 0.8mm.) The main technique I use is an asymmetric hatching, which simply means I avoid using parallel lines as much as I can. 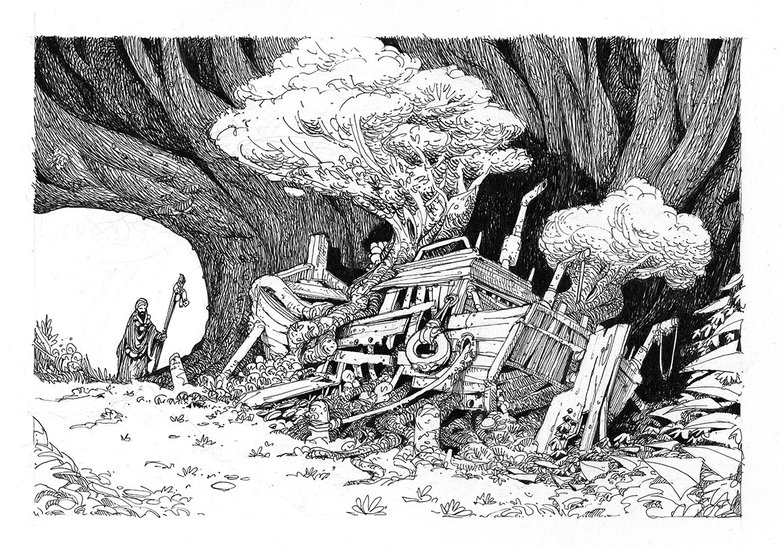 Usually when I come up with an idea I start exploring it by looking at many references. This way I begin to create a fresh visual library limited to the topic chosen. I try not to directly copy any reference, but to study them and then apply the elements that I find the most interesting. Once I find the overall idea I put down some quick sketches exploring the composition. In this phase I like to use a light grey marker and then go directly with ink because it forces you to make clear decisions. 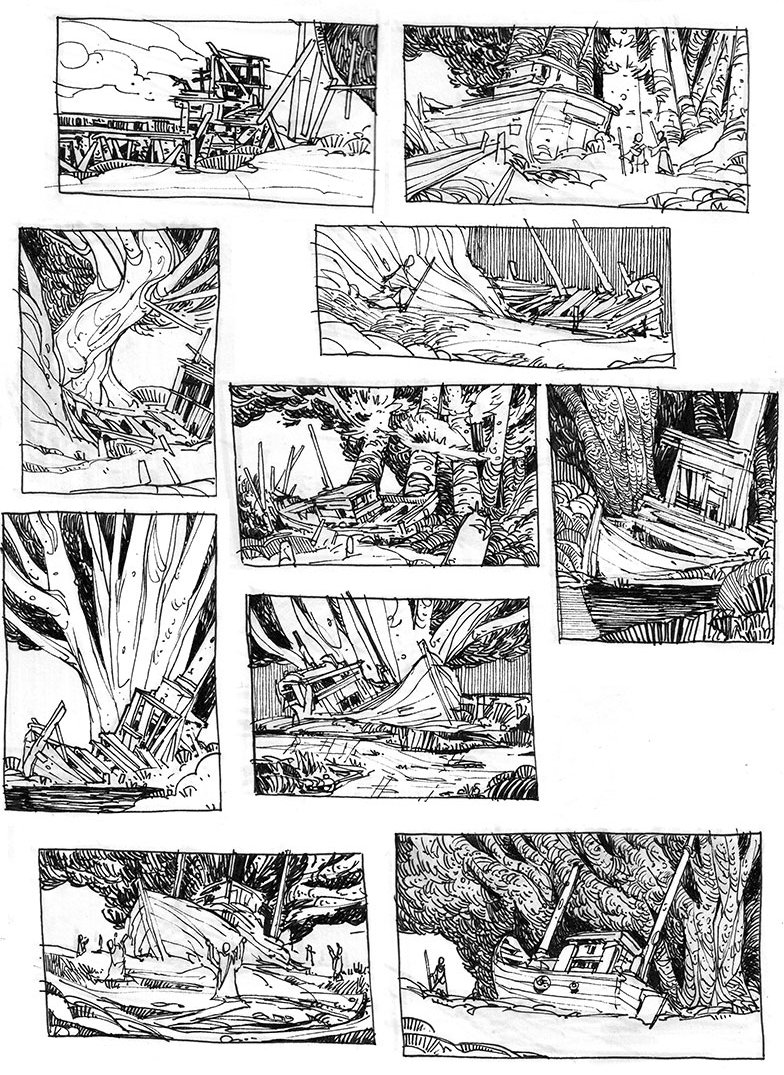 Once the idea is set I choose one of the thumbnails and then start blocking in the final drawing. In this first passage I prefer to use the pencil. This way is easier to control what you draw and to go back erasing if you’re not satisfied. My main focus here is the position of the objects in the scene and the general shapes and volumes. 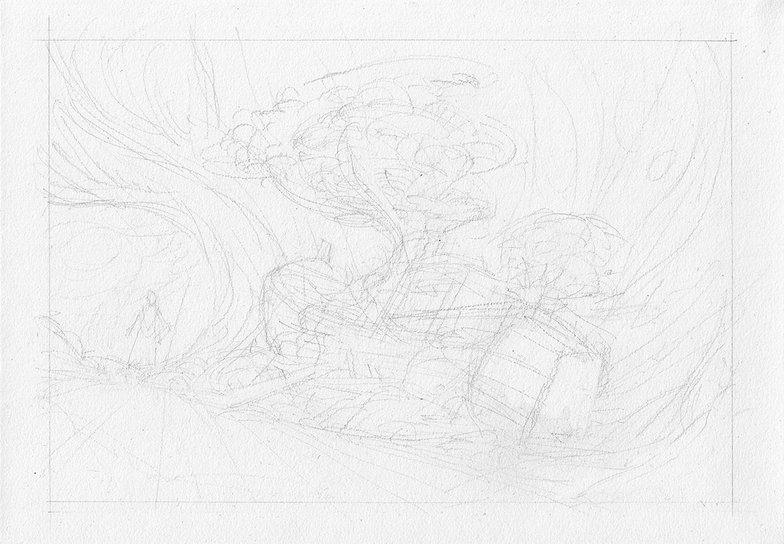 Blocking in the main shapes

Although I mainly follow the thumbnail idea, I always make some changes. In this case I added the two smaller trees growing on top of the boat to stress the idea that it was abandoned a long time ago. I then start to add details focusing initially on the bigger elements and drawing a rough indication of where I will put the main shadows. I like to leave the drawing rough, preserving a certain amount of liberty, allowing me to make direct changes later with the ink. 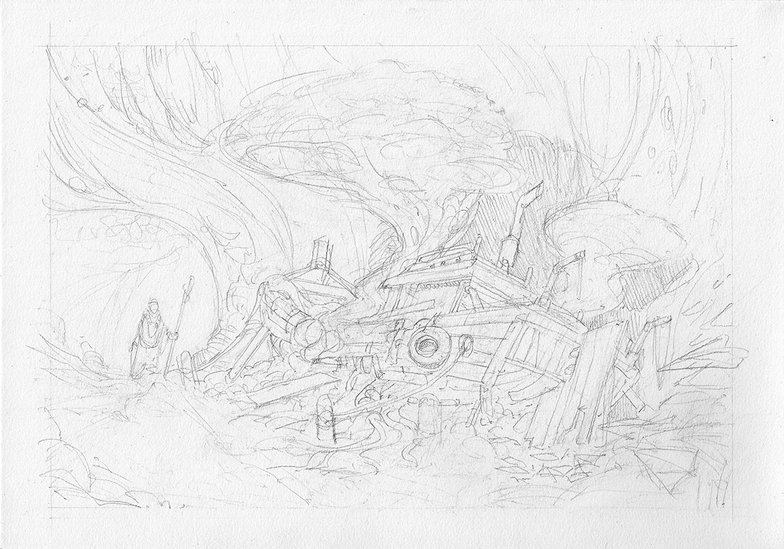 Since the boat is the main focal point of the image I started defining the drawing from there. I use a clean line first, focusing on the design and the shapes. I never draw a precise outline of each object, but a mix of outline, mild textures, occlusion shadows, and scribbles: anything useful to nicely define the shapes and the initial volumes. I try as much as I can to never draw parallel lines or straight vertical or straight horizontal lines; because I think it flattens the image. Instead, I use a slightly curved hatching to highlight the volumes and enhance the dynamism of the drawing. 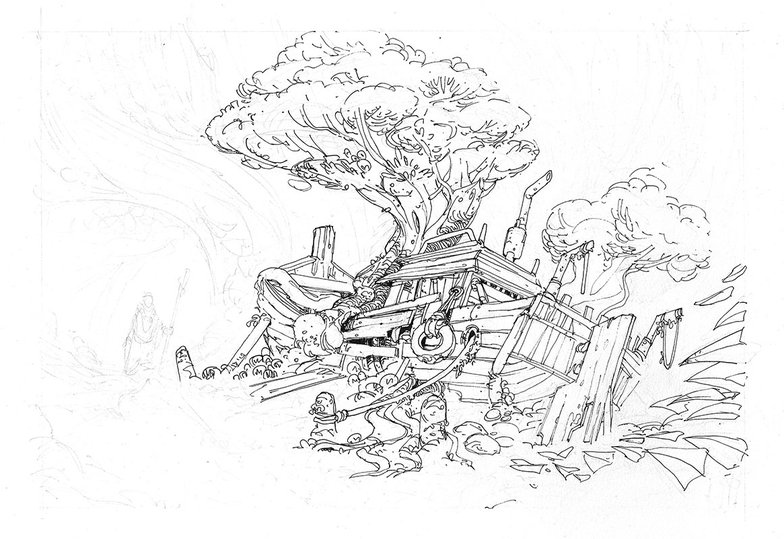 First step defining the shape of the boat

The tree behind the ship helps defining the flow of the whole image. Once again I start with clean lines to decide the general shapes that will characterize the big trunk. I intentionally left it almost devoid of details, since the main focus will be the boat. For this purpose I also define most of the details at the base of the hull with a clean line. I concentrate especially on the broken planks on the side, adding a wider variety of textures and contrast there. Also, for the textures I maintain an asymmetric hatching, avoiding parallels and long straight lines. 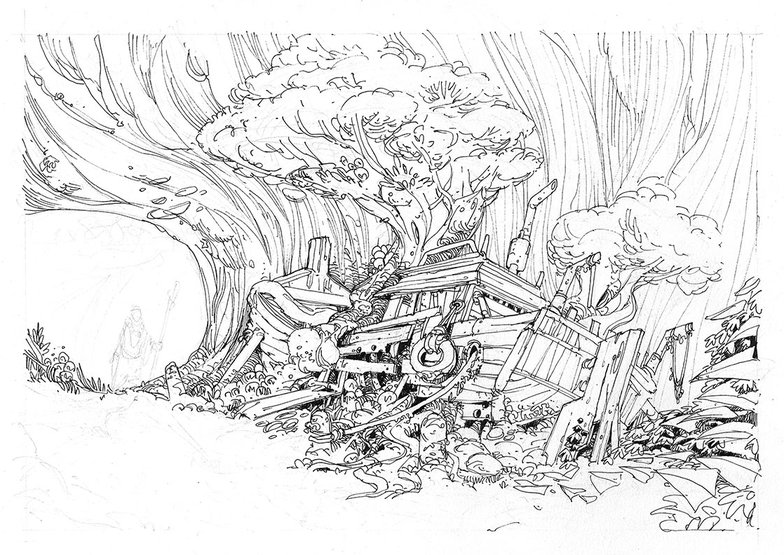 Adding the flow of the giant tree

Following the initial pencil sketch, I now indicate the big shadow on the tree. This helps the boat stand out against the background that I also started darkening at the same time to stress the contrast. I find it useful not to go too dark at this point, instead layering the textures and the shadows throughout the drawing, gradually building the contrast. 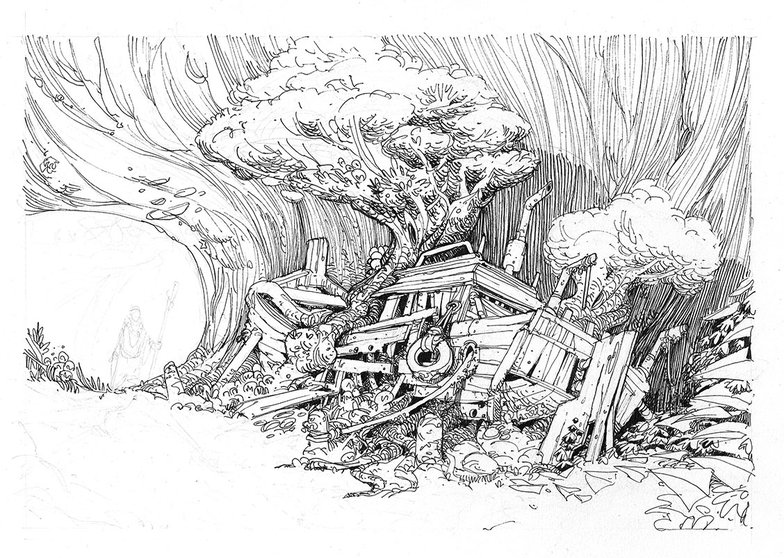 A matter of contrast

At this point I felt the drawing was missing contrast so I decided to push it by darkening the background and leaving the small trees and the boat very bright. At the same time I put a midtone shadow on the back side of the boat to highlight its volume. Adding contrast and occlusion shadows to the small areas helps cleaning up the shapes and details, giving the image a finished look. 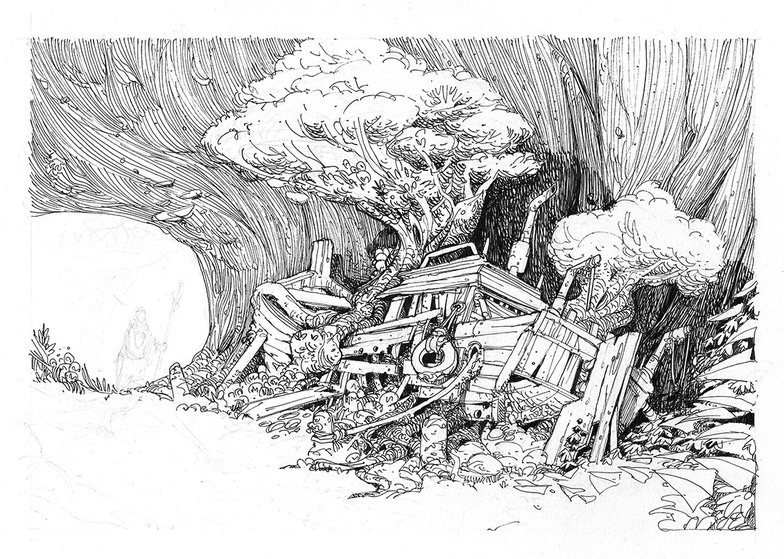 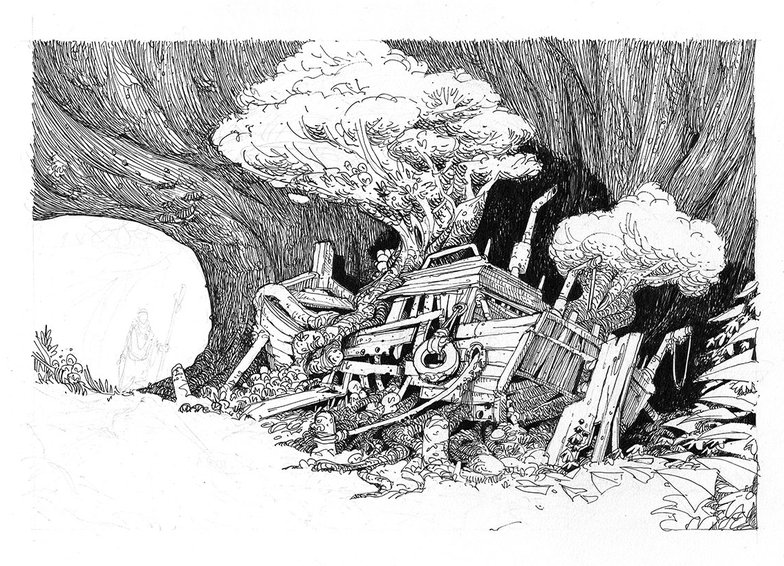 Adding more contrast between the planes

At this point all the design work is already done and the main issues are solved. I add the character to give the image a little bit more story, then I just keep detailing. I pay attention to the amount of details I’m adding so I don’t overdo one area. A good way not to overwork the drawing is to purposely keep some areas with fewer details than you would normally draw, so you can create a succession of fill and empty spaces. 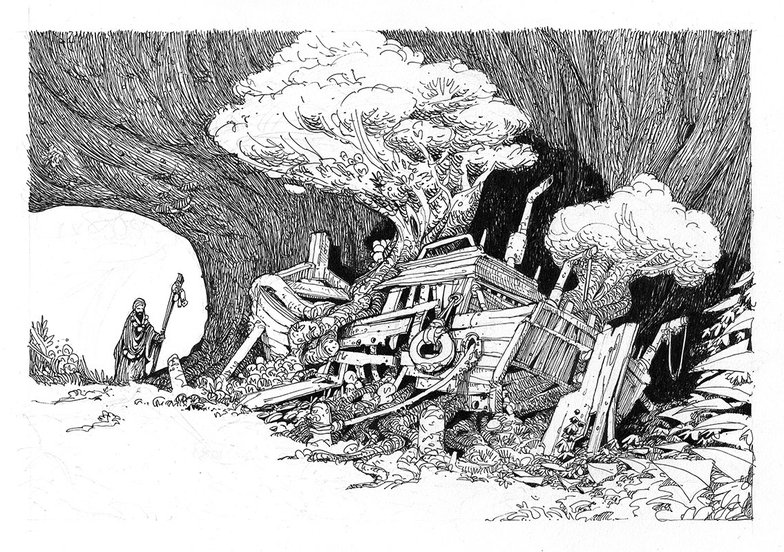 Looking back at the thumbnail I noticed that I was missing the spaces between the branches of the big background tree, so I added them by simply darkening some areas. I then put some more details to indicate the ground and I keep going until I am satisfied with the result. 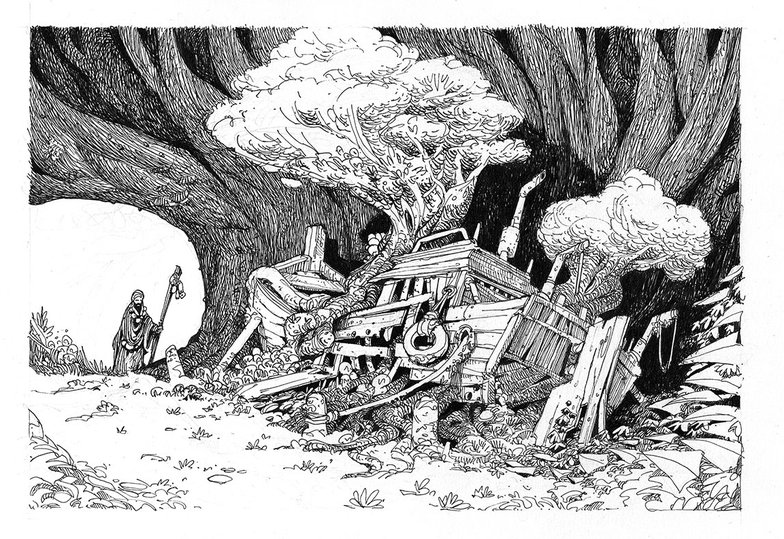 Try to avoid parallel lines or straight vertical or straight horizontal lines, because it flattens the image. Use instead a slightly curved hatching to highlight the volumes and enhance the dynamism of the drawing. Dots and small circles also help giving a nice rhythm to the drawing. 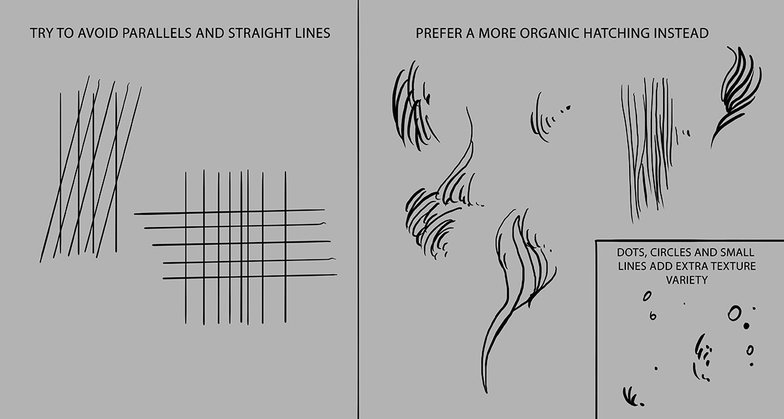