How to paint an aging face

In this tutorial you will learn some tips and tricks for aging a face from young adult to old. The character I’ve created for this tutorial is a stylized female but the aging applied will be realistic and can be adapted to suit any style character of any gender. I am using Procreate and an iPad for this tutorial, but you can use any drawing medium you like as we won’t be going into any technical or software specific detail. 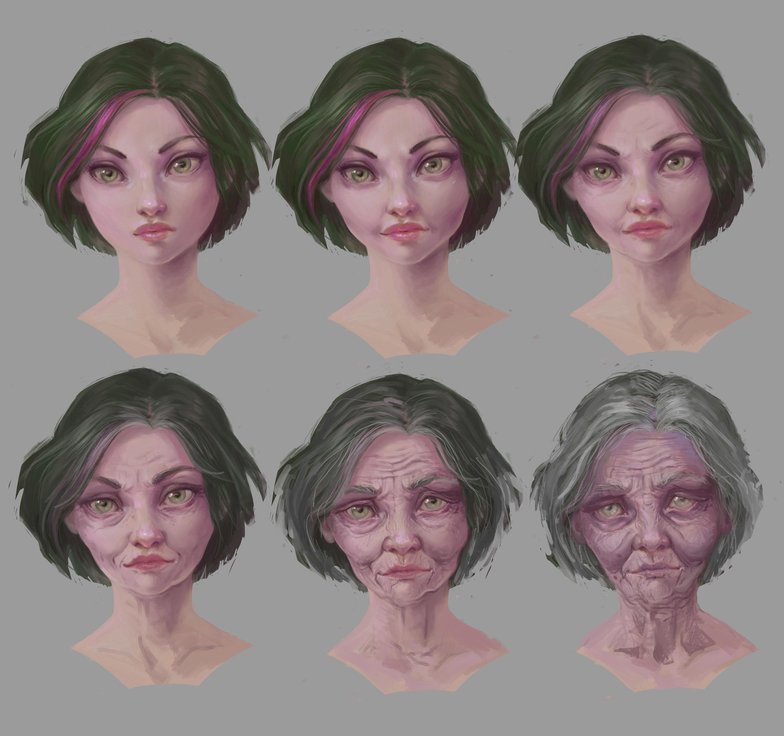 Young people are often characterized by their bright features, big eyes, smooth skin, and soft lips. As you can see here, she has no bags under her eyes and also no wrinkles. The eyelid has a single fold and her cheeks appear soft without too much of her cheekbones showing. The lips are full of color and the area around the eyes and nose is similar to the rest of her face. Her neck is smooth and her hair is thick and full bodied. 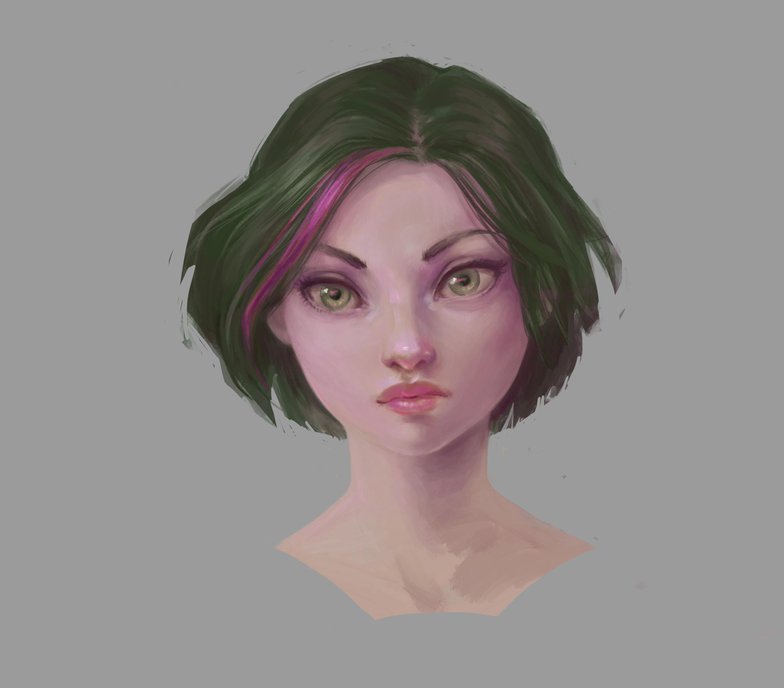 Once reaching adulthood, the structure of the face doesn’t change but, as the skin and muscle age, they form folds and creases over the underlying structure. While all faces are different and a person’s lifestyle will affect the way in which they age, where and how a face ages is generally the same or at least rather similar. It is worth noting that the cartilage in both the nose and the ears will continue to grow throughout a person's lifetime, so younger people will generally have smaller noses while older people will have much larger noses and bigger ears.

You can draw circles on the face to identify where the creases and wrinkles will primarily occur. Remember when aging a face that gravity plays a huge part. As we get older, everything will sag and be pulled downwards, causing parts of the face to look as though they are drooping. This affects everything, from the height of the brow, to the position of the lips. On the left I have identified the key areas where wrinkles would appear, and on the right you can see how the wrinkles have followed these original shapes. 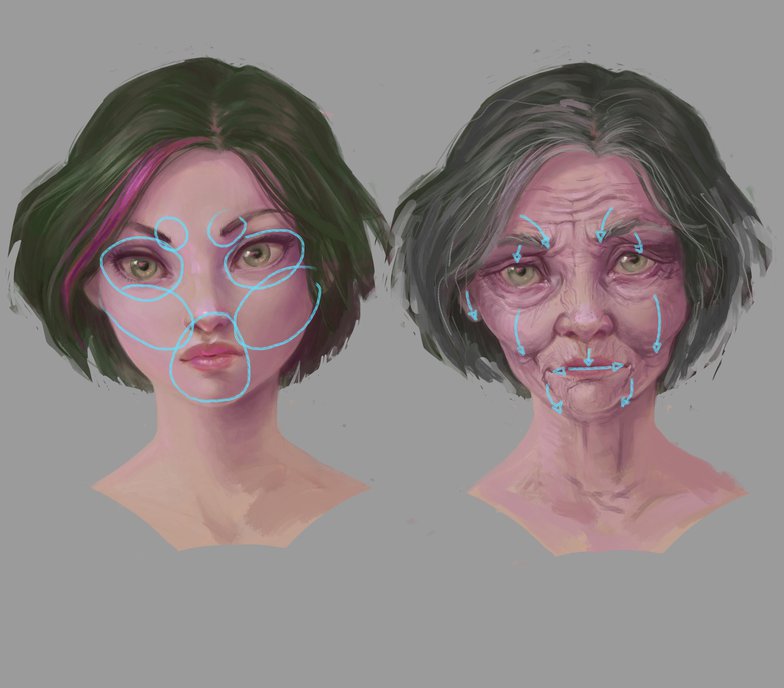 At this stage you can see I’ve added in some of these “droopy” bits as mentioned above. She has fairly big cheeks which means that as she ages the cheeks will naturally sag, causing pockets of skin around her jaw. Because everything sags a bit with age you’ll often notice that the mouth seems to move down creating a longer philtrum as well as thinning out, creating thinner lips. Full plump lips can be a nice way to make your character look young while a lower, thinner mouth can help make them seem older.

Another thing you’ll start to notice is that creases will appear on the neck over time. As the skin loses its elasticity and becomes thinner, you’ll often notice the underlying bone structure and ligaments become more apparent, this is also true for the neck. When aging a character it’s important to look at where wrinkles will appear first, this stage nicely highlights the initial wrinkles we will tend to see with aging, and most of the wrinkles to follow will stem off of these. 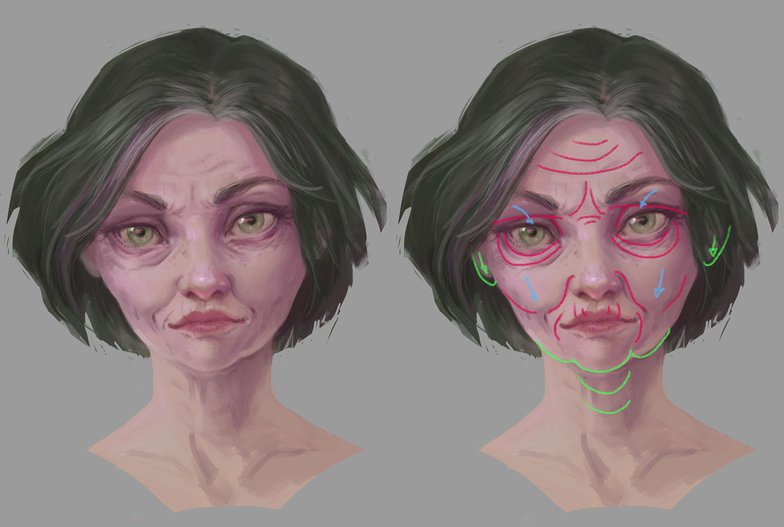 Notice how secondary wrinkles and furrows begin to appear alongside the primary wrinkles as a person gets older. These will often start to appear on the nose, extending out from the eyes, around the mouth, and also extending outward from the lips. The primary creases will seem to deepen and are most apparent where the skin has been most affected by years of expression, such as around the mouth from smiling, and the eyes and brow from frowning. 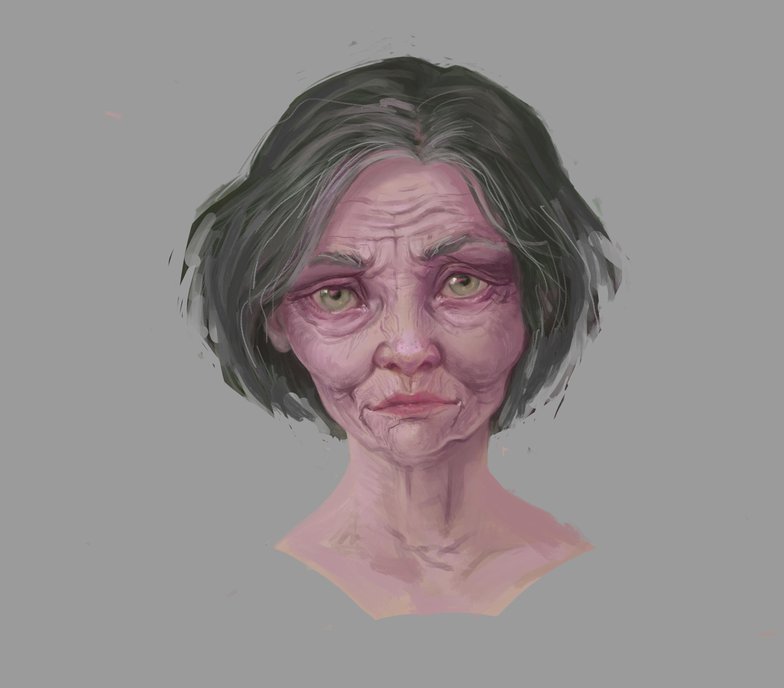 The shape of the eyes might change noticeably with age too. This is because the upper eyelid starts to droop down and hang over the eye, causing the eyes to appear smaller and more sunken. This change also tends to affect the eyebrows, causing the brow to shift forward towards the bridge of the nose and hang lower. 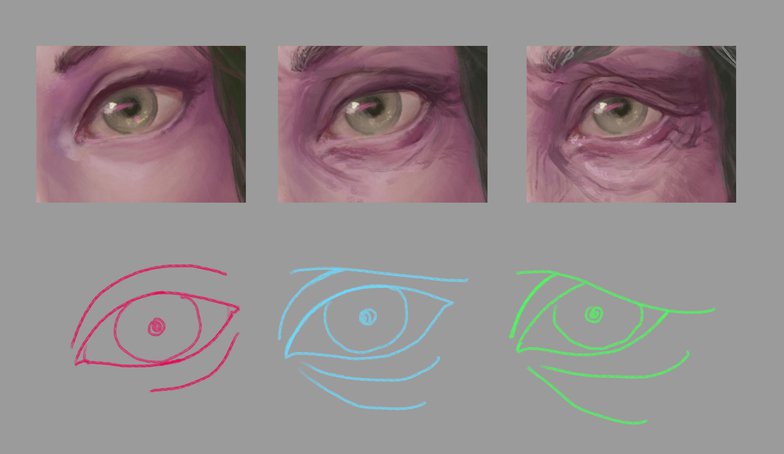 You will also notice that hair thins with age and that the hairline gets pushed back. This tends to be a lot more prominent in men but is also true for women. How much the hair thins may be due to genetics and it’s not impossible to find very old people who still have a good head of hair! At this point the hair should be either fully grey or white.

It is also common for eyes to take on a slightly milky appearance as people get older due to cataracts which develop with age. This is not true for all old people but is definitely a good way to make your character show their age. The skin takes on a slightly more blueish and purple appearance, this is due to the skin becoming more translucent with age, allowing the blood vessels underneath to shine through. You may also notice dark sun spots and blemishes appear on the skin which are common in older people. 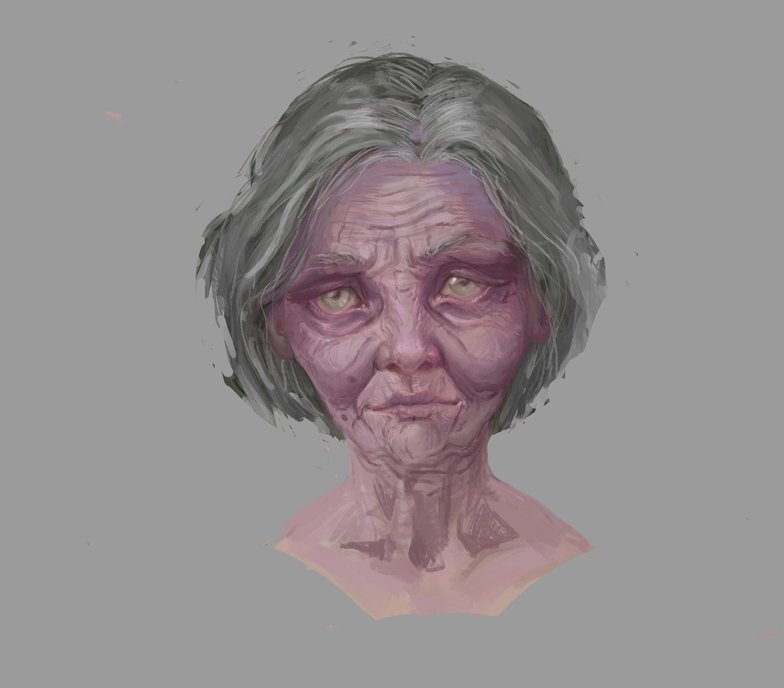 If you would like to learn more about drawing skin at different ages, you can take a look at my in-depth skin tutorial here.

Lastly, if you’re looking to age your character into death you can shrink back all that skin that’s been becoming droopy and reveal the skeletal form underneath, but that’s probably a tutorial in itself! See you next time. 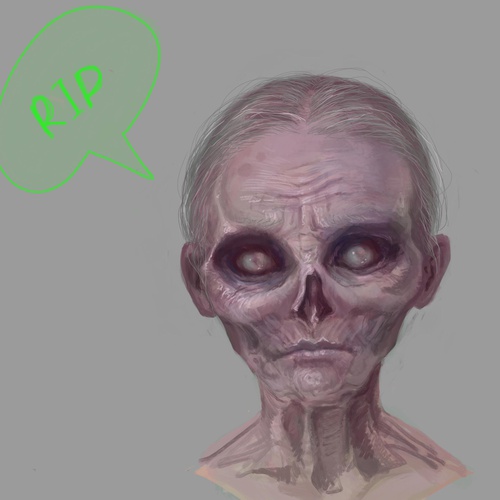 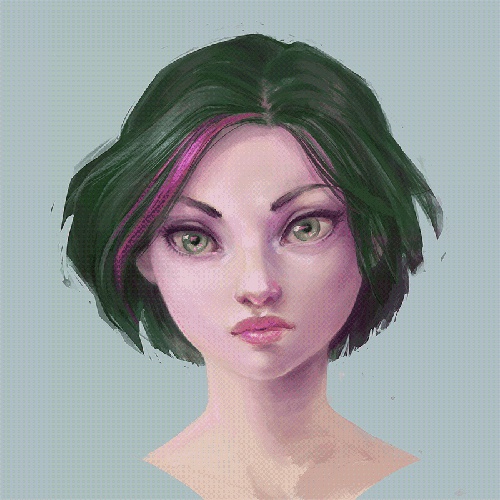