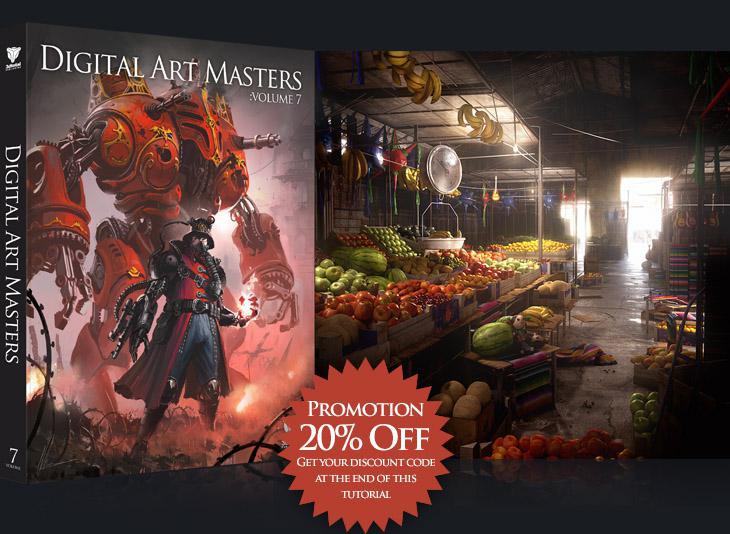 I have always said it is important to have an awesome topic in mind before starting a new image, otherwise you may find an excuse to not finish.

One day I was in a market in the city where I live, Guadalajara, called San Juan de Dios. All of a sudden I stopped and noticed everything around me. I saw the colors, shapes, textures and at that moment I knew that this was the inspiration I had been searching for. I spent the following days looking for images of fruit markets from around the world. Armed with this information I started to set the foundations for my image, such as composition, elements, color temperature and exposure.

I started roughly sketching an image to get the overall feel and once I had established the composition and proportion I started working on the scene assets. At this point I decided to go with V-Ray due to the fact that I've seen some very good CG images that have been created with this engine. This was a big decision to make because I had been using mental ray over the past two to three years.

Once I started to classify the assets necessary for my image I felt overwhelmed by the challenge of generating them and populating the 3D scene. I tried to be careful and organized while generating the assets (Fig.01). I created a Max file for each final asset ("banana.max", "apple.max", etc.,) and then started to manually fill the fruit crates before being made aware of a big problem - realism! It just looked weird. After considering this for a while I remembered the "behind the scenes" features for the movie Ratatouille, where they ran into the same issue of the props looking unrealistic. Their solution was to let gravity do the job for them, similar to a real life situation. 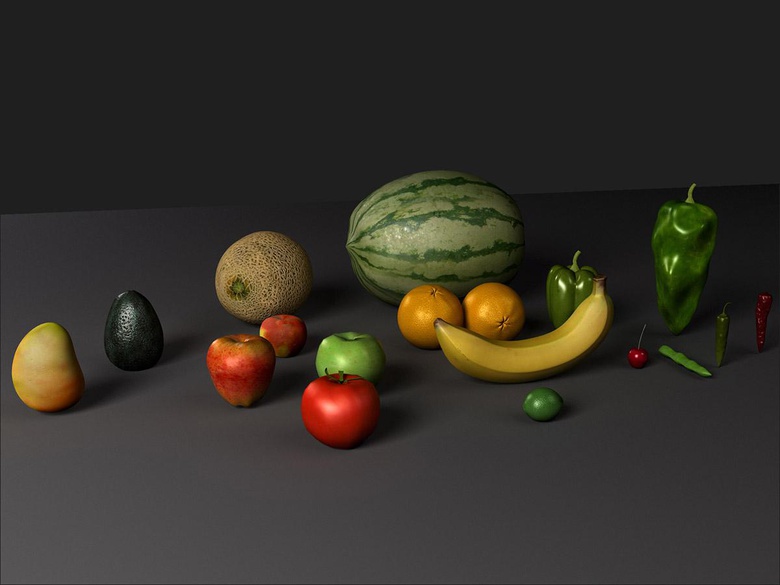 I created a lot of instanced fruit geometry and using the RayFire plugin I controlled the dynamics of the fruit falling onto the crate (Fig.02 - 05). Once satisfied I collapsed the entire object (now a full crate of fruit) as a V-Ray proxy. This allowed me to easily handle a single object composed of thousands of polygons. 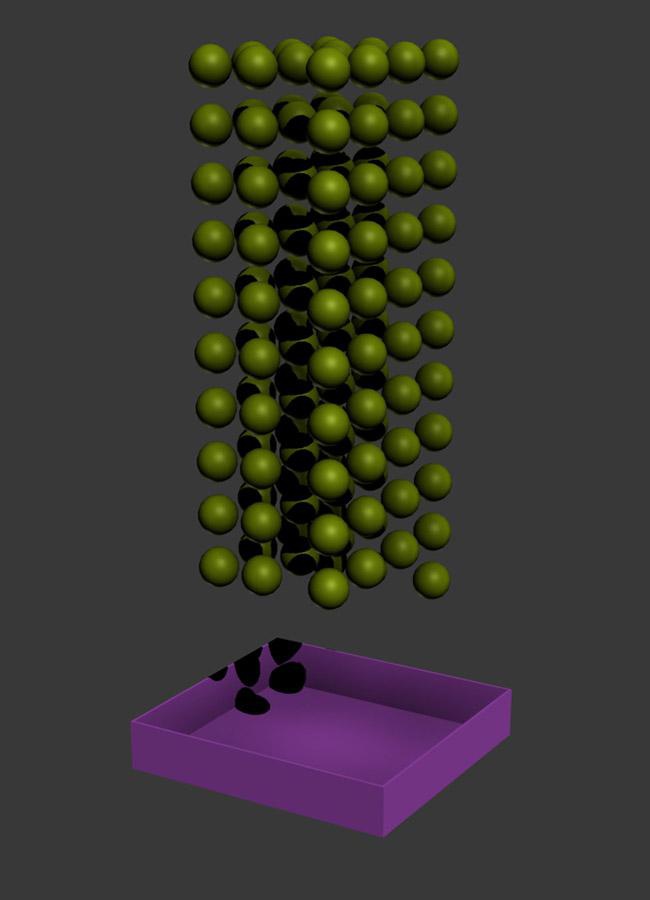 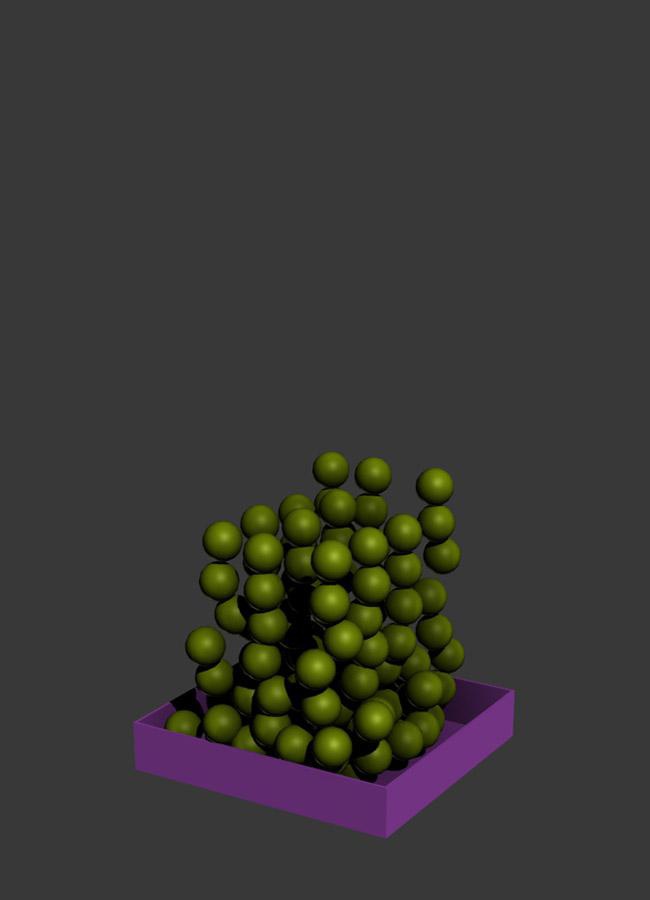 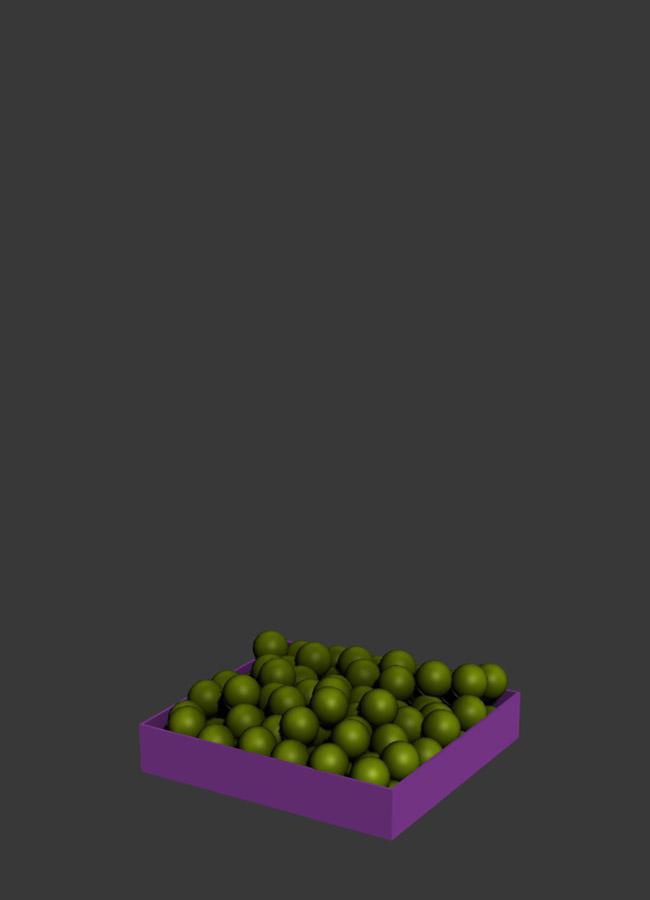 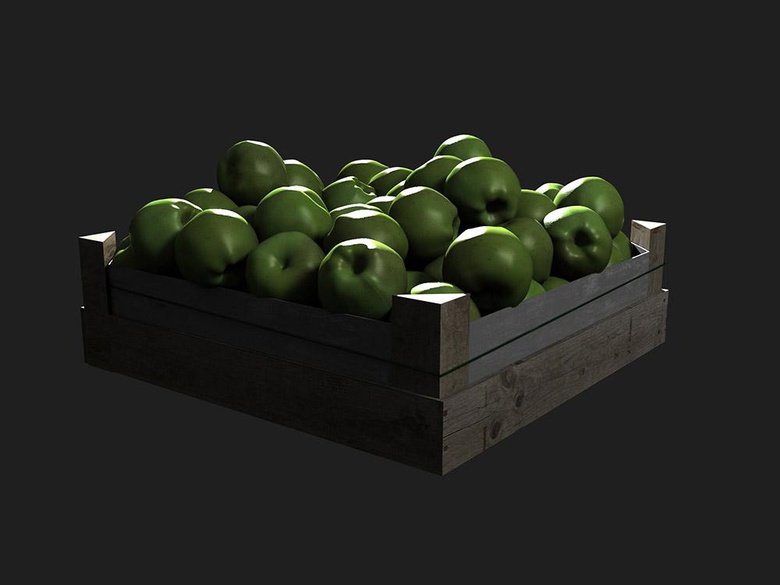 The next thing I wanted to try was to properly populate the scene with thousands of objects. From the very beginning this was a real challenge and as I said before, I had a great number of different assets, such as fruit, crates, guitars, stalls, lamps, garbage, etc. They were all previously textured and shaded ready to be used.

Due to the fact that I didn't have a final sketch to work from, I populated the scene until the composition looked right using a trial and error process, but undoubtedly more artistic. A few days passed before I reached a satisfactory stage with a properly populated scene and both a colorful and acceptable composition. However I had to take a step back several times to model objects that I realized were missing. For example, guitars, a few piñatas, serapes and rag dolls. These models added a traditional and regional flavor to the image and were not as common as the others (Fig.06 - 07). 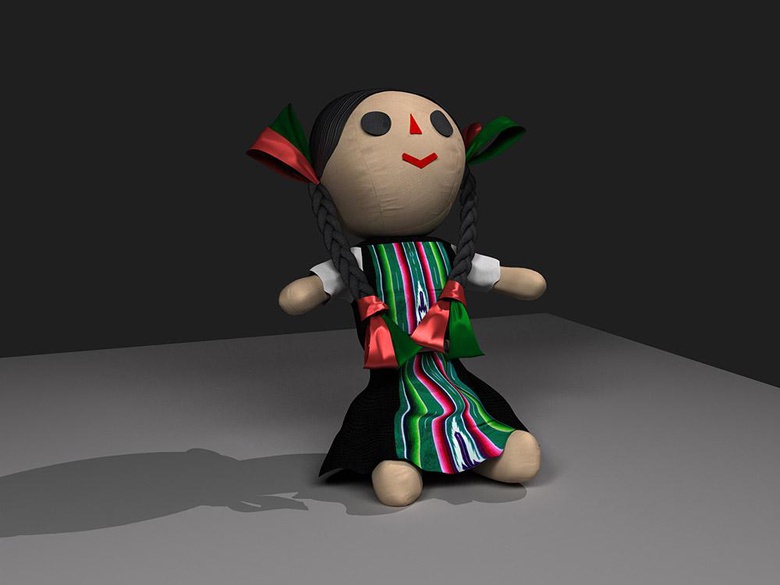 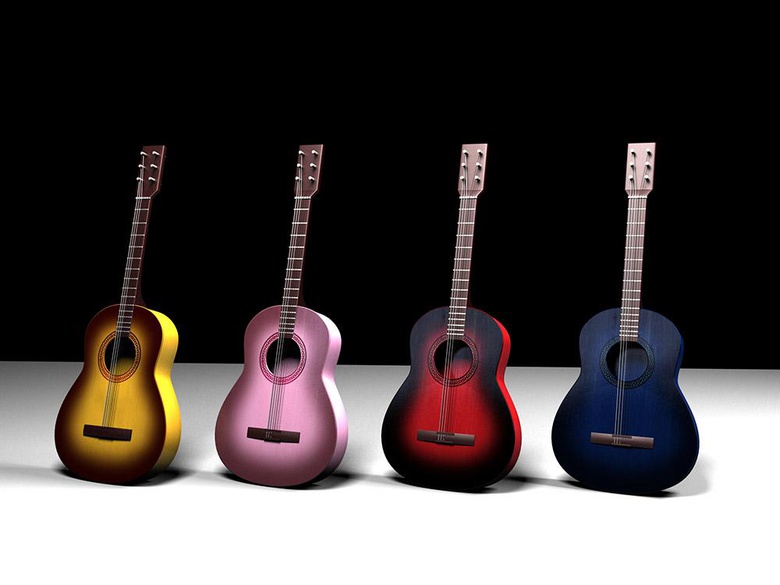 Whilst creating the scene things started to feel a bit chaotic and disorganized. There were plenty of repeated elements, so I decided to add one unique object: the scales. I made these a focal point using the rule of thirds. This would allow me to enhance the composition in a natural way. Using this technique I positioned several objects to help frame the image more effectively, maintaining the scales as an key component (Fig.08). 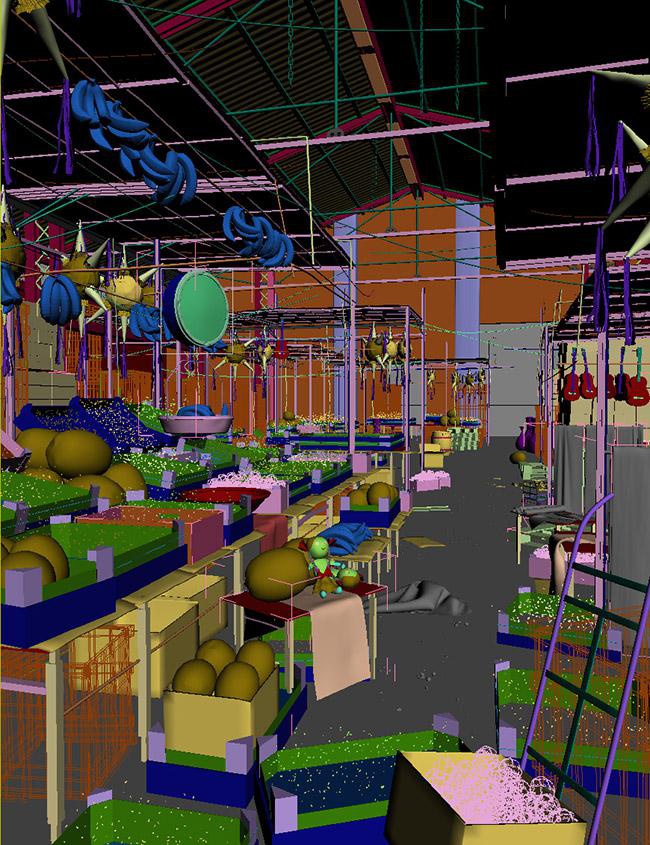 My next and favorite step was the lighting. This is what I enjoy the most, so I took care when working on it. I undertook several tests with my camera, compared my image to a bunch of pictures from the internet and after a while I managed to achieve the look I wanted. During the lighting process I found it vital to maintain a realistic feel between the 3D camera, the lighting, exposure and lens effects.

The lighting set up for the scene was very simple. I started testing with an exterior light (direct light) and then added the more obvious lights such as those above the fruit stalls (V-Ray lights). I rounded everything off by adding extra lights in a few spots as I felt it needed enhancing.

Finally I used Photoshop for a few improvements as I wanted to create a richness in color and contrast that is only possible in image-editing software (Fig.09 - 10). At this point I added extra texture to the floor details, objects and signs of dirt and wear. As a final touch I used Digital Fusion to add film grain and chromatic aberration. 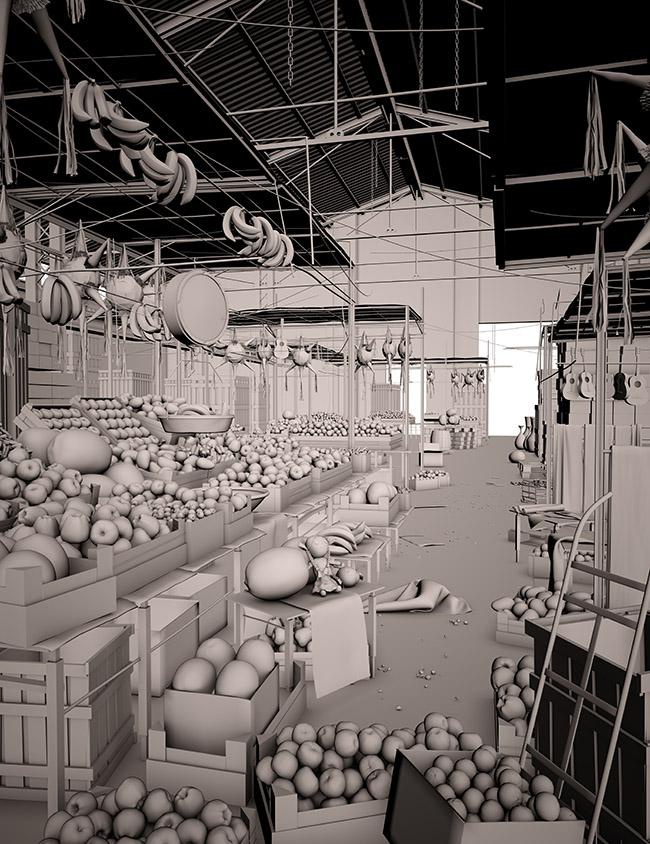 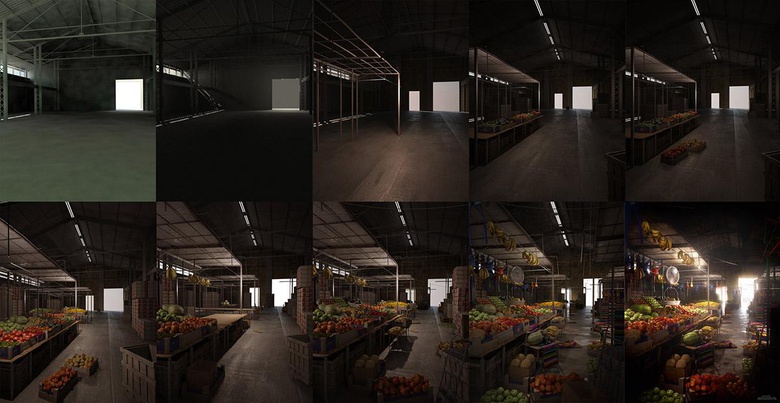 That is it! I hope you found the article useful. I would like to add that at the end I was very happy with the result, but I am hoping to improve for the next one. 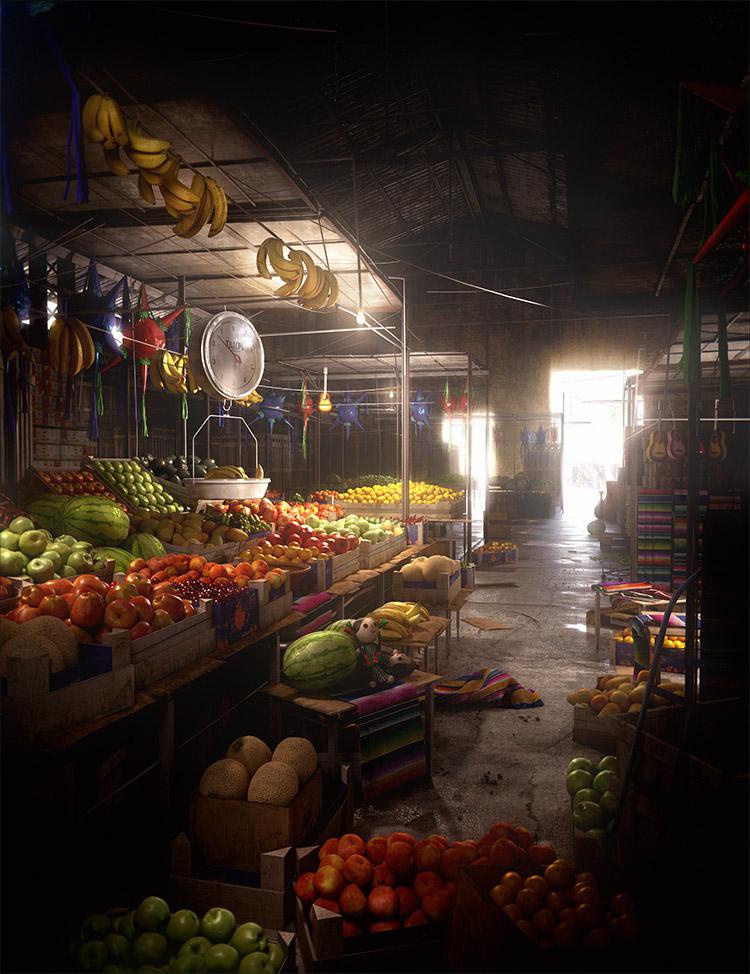 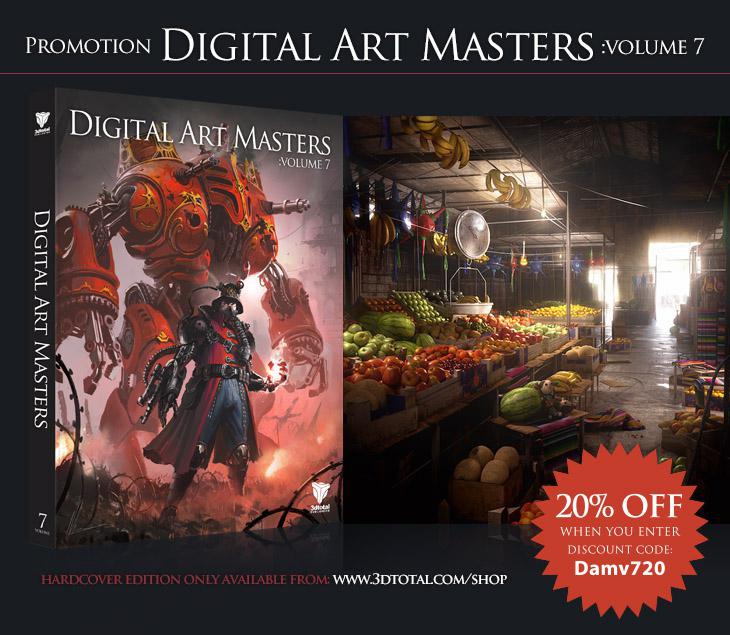