Model, light, & texture a cartoon image based on a concept

3D artist Maria Cifuentes takes us through her process of creating a still image from scratch based on an existing concept using Maya...

In this tutorial I will explain the process that I took to complete the artwork Inglorious Raccoons. As I started this project I had very little experience in 3D art. This project helped me feel more comfortable using the software, and CG concepts. This tutorial will follow my thought process, and the steps in the order that I went through as I worked on this image. I hope that by reading this tutorial it will help you, or inspire you for your upcoming projects.

Before you begin, you need a concept art to follow. I spent a month looking over concept art images before I finally settled on the original concept "Inglourious Raccoons" by Eugene Valyntsevich. It is very important to be passionate about the concept art that you choose, because you will be examining every inch of the image. Then, using the amazing software PureRef, I started collecting references. I made sure to focus on mood for the lighting, texture references of the main assets, and references of objects I either found confusing, or needed more angles of.

I believe it's very important to prepare yourself before jumping into Maya. I began by breaking down the foreground, midground, and background of the image. This way, I would have my priorities set on what to focus on. It also helped me understand the silhouette, and how the eye traveled across the image. I also created a lighting diagram. My concept art was very intricate in the way it was lit, and by breaking down where the main lights and shadows were, it made me feel more confident in my placement of objects. 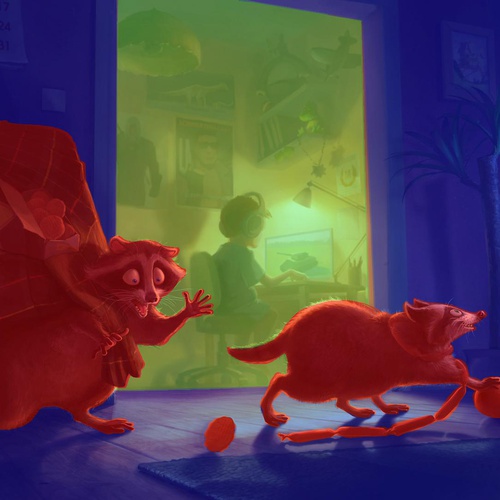 Breaking down of the foreground, midground, and background 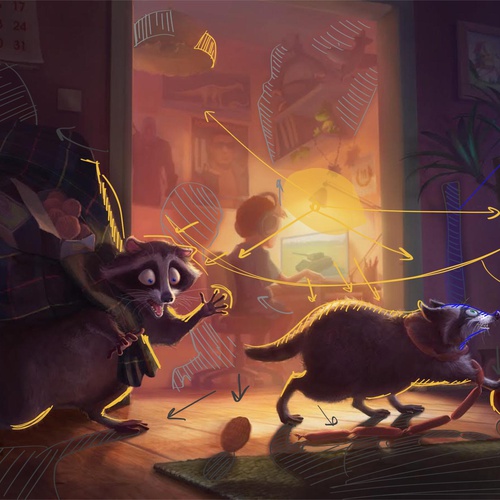 Diagram of the main lights, and shadows

Surprisingly camera matching was one of the most challenging aspects of the making of this project. All of my respects for match-moving artists! My main advice would be to look at the converging and parallel lines. Also, make sure you understand if the image is one-, two-, or three-point perspective. At the end it might not match perfectly, mine didn't, but what's important is to check that the essence of your scene is still the same, and that the irregularities between them won't take away from the comparison of your final image.

After the camera was established, I began blocking out my shapes. It can be overwhelming when you have so many props and characters in one scene. I dealt with it by starting with the main room's structure. Once you have a floor, door, and window, your scene begins to feel more real. My process afterwards was a little more sporadic. I worked on different props interchanging between them in order not to get stuck in one shape. The raccoons however, I blocked out by sculpting them first, then exporting them into the scene to see how they fit.

As I stated above, I began working on the raccoons by sculpting them first. I used Mudbox for sculpting. Mainly what I focused on were the angles of the body and how to communicate the movement that the image had. For all my sculpting assets I imported the concept image to Mudbox, began with a sphere, and went from there. Although the raccoons had a more stylized look, it is still important to rely on references for areas that you are unsure of. By following the same steps, I also sculpted the food bag, cookies, and cake.

Since it was my first time retopologizing, it took forever for me to do all the raccoons plus the food items. I set my raccoons as live objects and used the Quad Tool in Maya to retopologize the objects. Because I had sculpted the head and the mouth separate, I had to be very careful in the topology along the edges so I would be able to merge the vertices to form the completed object. For the rest of the environment I refined it by cleaning up the topology, adding details, and holding edges. 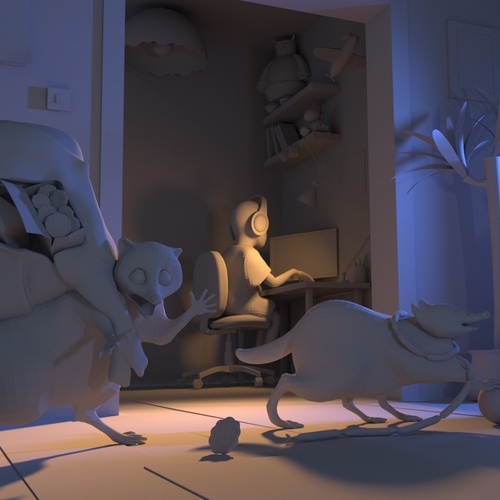 Complete scene with the raccoons retopologized, imported, and refined environment 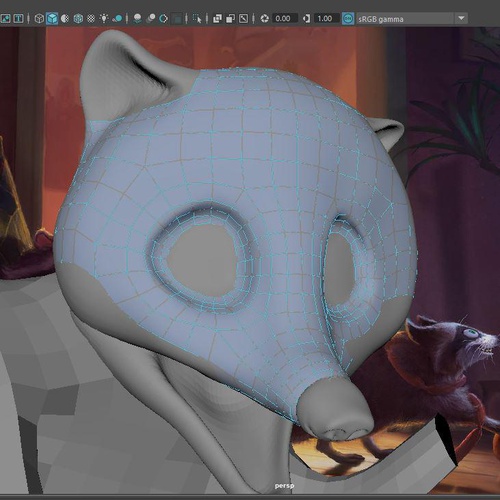 Process of retopologizing the head of the raccoon

The UV process was pretty straightforward. I did the same steps for most of the objects. First I did an overall automatic UV step: planar, but then to separate the UVs I used the 3D Cut and Sew UV Tool. This tool is incredibly useful to cut apart your models in 3D. At the same time, this tool separates your UV faces by color, so it's more clear for you to see where you are cutting. Afterwards you just unfold them, and then adjust as needed. Another tip that's useful for when you're texturing is to separate materials by UDIM. 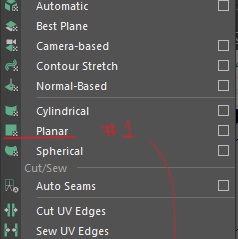 The two steps that I mostly used to unwrap my objects 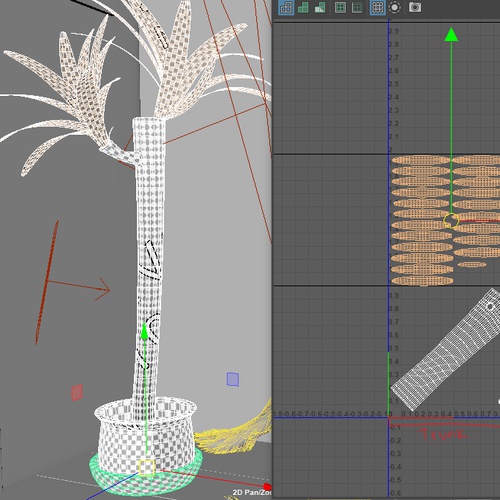 XGen is definitely intimidating for beginners like me. For this project I relied on a lot of YouTube videos. When dealing with XGen one of the most important things is to always set your project. In XGen I used groomable Splines. Then, I used tools under "Grooming" to adjust them according to the concept. It's very important to use modifiers in order to give the hair a more natural look. To elevate your groom even more you could use stray hairs, here's a video that really breaks down how to use them: 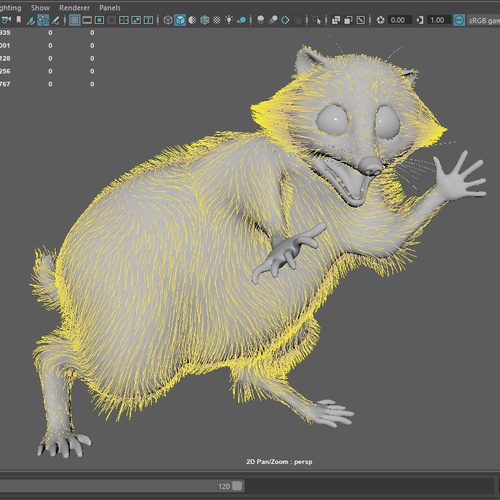 This is the scene in XGen. Looking back I might've had too many guides, you could get away with less 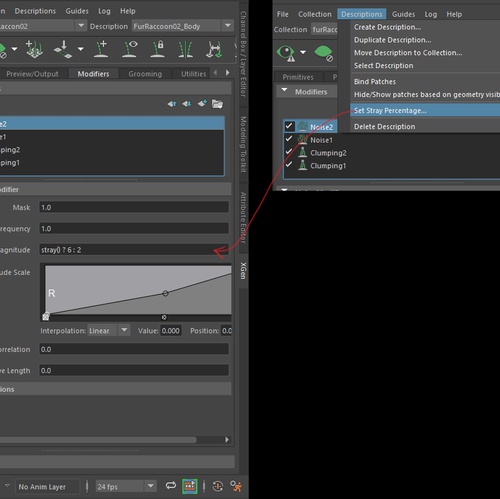 Strays give your groom a more realistic look. Also Clump and Noise are my top 2 modifiers 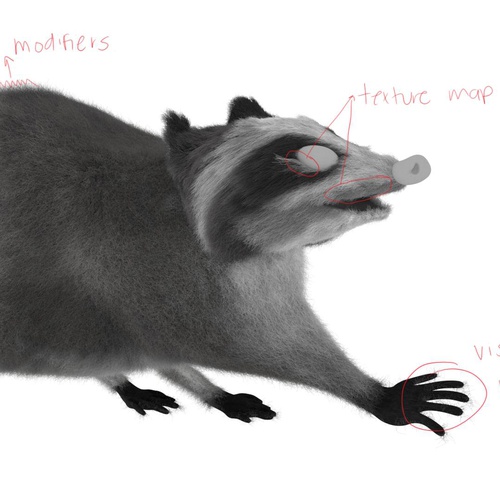 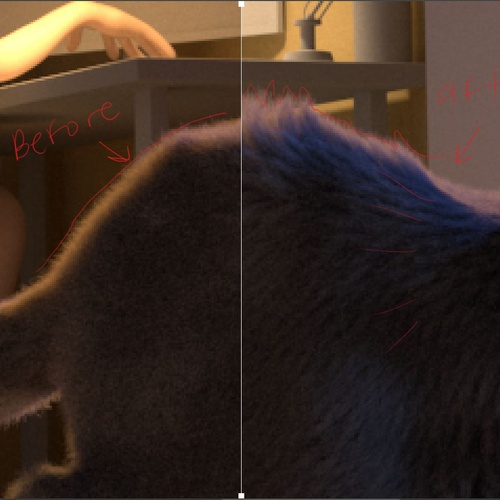 The power of the right use of modifiers. The one on the left had too many and random modifiers

I textured the skin of my raccoons using Mari. I textured them according to what I wanted their fur to look like. For the nose, eyes, and tongue, I used Photoshop since they were pretty straightforward. Adding the maps to the fur in V-Ray however, was more complicated. This video was my main source, and helped me from going insane:

The main thing is that your diffuse map has to be set to the XGen project, as well as to its own V-Ray hair shader. 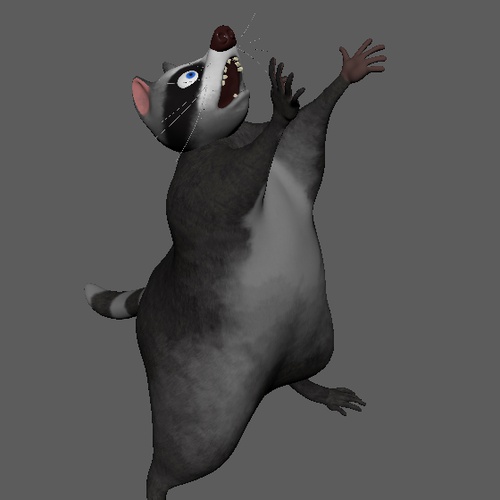 Raccoon diffuse map from Mari for the fur 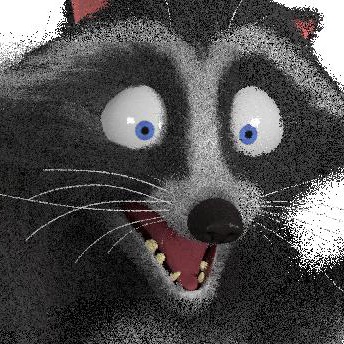 Constantly rendering helps you understand what aspects to fix

This is one of the steps that took the longest time. My main tip is to focus on the objects closest to the camera. These are the ones that are going to need the most detail. I textured the assets using Mari and Photoshop, while relying on reference. For look development, it's tricky to get the right look based on different light settings. I had a different scene for the overall look development of assets, but I also jumped back and forth between that, and the main scene, with the lighting to check the overall look constantly. 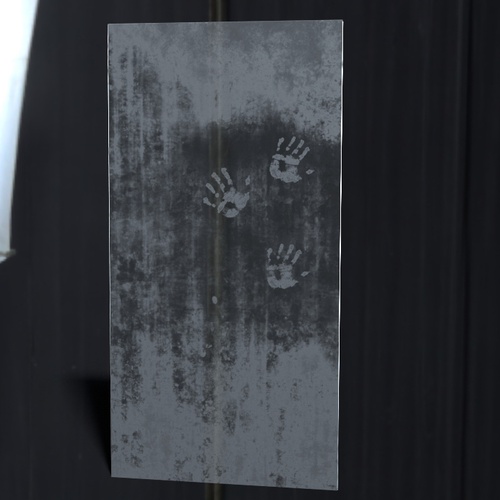 Separate look dev scene where I checked my assets individually 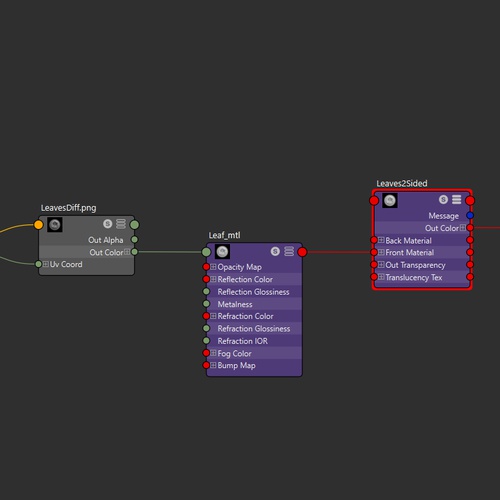 This is a shading trick I learned at Think Tank, to use a double sided shader for leaves

Matching the lighting of a whimsical concept art is very tricky. A lot of aspects of lighting in a drawing can defy physics, and not be completely accurate when you translate them to 3D. I attempted to maintain the number of lights as low as possible, but that proved to be very difficult. Then, I started to get more meticulous over where specific lights were. I used light linking to objects in order to cheat my way around the image, and to help the main assets to stand out by the use of key, rim, and fill lights. 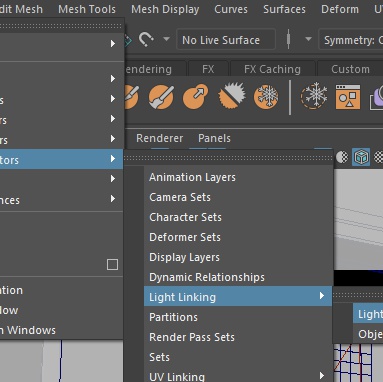 I used light-centric linking. It was easier for me to control the lights, instead of controlling each object 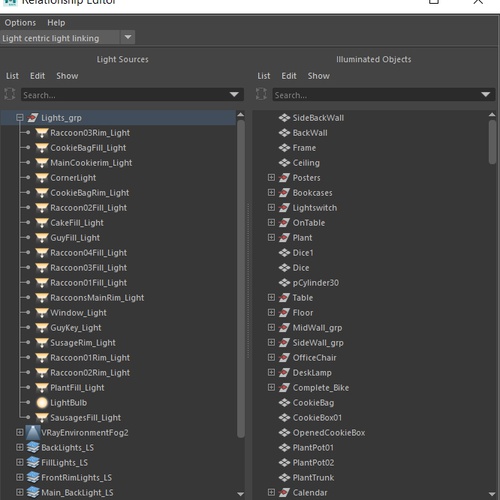 Total list of lights I used for the final render

All of my post-processing was done in Photoshop. Before post, I added 2 different render layers where I separately rendered a fog atmosphere from the back, and the front. I also rendered the main lights separately. This gave me more control in the final step. Photoshop helped me color correct some aspects that weren't quite right, as well as composite all the lights and atmosphere together. These final touches that are added is what really takes your image to the next level. If you're working on your image, make sure you leave at least 2 days for post. 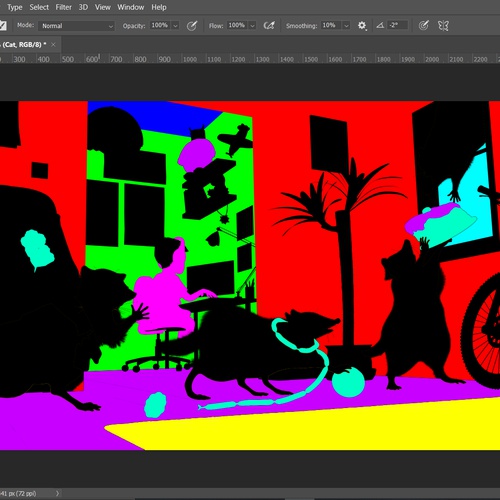 Matte IDs are your lifesaver. It helps you select objects easier for more control 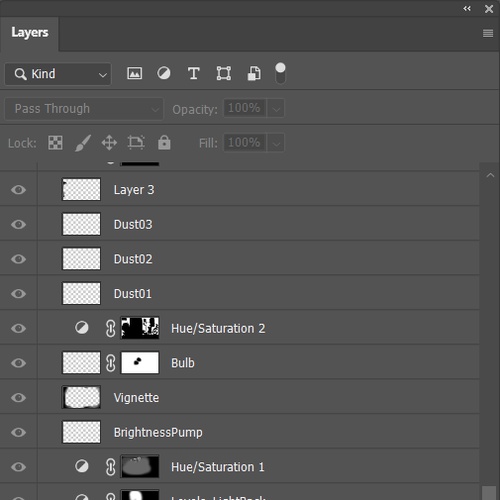 This is how some of my layers ended up looking. Name everything well, so many layers can get confusing

Don't spend too much time on objects that are far away from the camera. At the end you will have wasted time, and you won't be able to see your details in the final render.

Top Tip 2 - Google is your friend

Having little experience in 3D doesn't have to stop you from doing what you love. I had very little experience when I started this project. Nowadays, almost everything is online. All you have to do is figure out the right way to look things up.

Speaking only from experience, I thought I was going to do things way faster than I really did. When you're starting a project and you have a due date, make sure you give yourself twice the amount of time you think will take you to finish a task.