Render Expert founder and arch-viz guru Mohsen Hashemi takes us through the process of creating a city scene by day, by dusk, and in wide-shot, using 3ds Max and other software…

In this tutorial we will talk about how to render a city space, manage the scene, create the mood and lighting, use color grading, and finally, post-production. I will show every subject with examples. I’ll share the challenging moments I faced during this project, and also show the techniques and tips I used during the process.

Initially, to start a project as always we need some inspiration or idea in terms of mood, lights, and so on. But before that we should have an applicable composition to begin our framing and the rest of the process. So my workflow here began with the large, main assets with enough detail but not too much, and for each shot I just added details separately. As you can see I started with 3 main buildings, and as I already knew the path I'm walking through I decided to use them as the main composition.

Then I started to make the overall building. As you can see in the image after I considered the main buildings (red color), I started to build up the connections like the main streets (yellow color), and then second priority connections (orange color), such as pathways, alleys, pier, and so on. Then I started to fill the spaces with the buildings to show a city space environment (blue color), and finally filled the empty spaces with trees and bushes to complete the space and show a real city (green color).

You should note that for managing the scene you need to be careful about the number of polygons, and scale of the city; you don't need to model too much, only do as much as is going to be shown in the render. And as you can see in the image I just made the shots which I needed.

Another point is that if you want to show a city space, the quality of assets are also important to show a better result. And for depicting a city space close to New York city, I would need to use tall buildings around the small buildings, so I used a collection of buildings including large and small ones from my library which I already named in the assets.

For the process here, I started to place some buildings with better quality as the second-most important ones, and then I used some of them as proxy to spread all over the scene to fill the empty spaces. As you see in a simple search there are rarely empty spaces in New York city, so I tried to do the same in my workflow. And here are some of the buildings I used in the scene.

The best way of making daylight is to pay attention to the physical factors which make your image more realistic, and those are light intensity, light angles, high saturated colors, and strong shadows and highlights. Basically it's not something you achieve 100% in the frame buffer but post-production could also enhance it a lot if you see it's taking too much time for you making the composition in the frame buffer. But for me, as I get used to working with buffer, it's so much easier to achieve my result in the 3ds Max than Photoshop. I used Peter Guthrie Overcast HDRI and corona sun for this image.

So after I made all of the settings and the result was ready I started the post-production. As you can see in the image at the beginning, I added a bit more detail to the asphalt and sidewalk, and then added more contrast to the foliages by using the translucency element by using the "Linear Dodge add" Blending mode. So as you can see the result is amazing and you can feel the direct light on the leaves really well.

Then we go for adding more fog with volumetric element, and as you can see with color balance and level adjustment and clipping the to the volumetric layer we can control the color and also the intensity of the fog layer too. If you didn't access to the render elements you can also use a fog brush and draw the fog in the places you want for overall fog.

In the next step, as you can see, I used some real cloud images after downloading them from Google, making a mask to only show the cloud part of the images, and then used the screen blending mode. So that's how I achieved a realistic cloud effect on the image, but the point is that you should be careful where to place the cloud image that it doesn't affect the main subject. And as you see for matching the colors of the clouds with the main image you can use clipping adjustments Hue\Saturation, and Color Balance.

In the final step I added a color balance and selective color adjustment to control the final color and saturation in the image, and also used Magic Bullet and Nik software to make the final contrast. And finally for additional vignette I use a blank white layer and added vignette by lens correction and used a Multiply Blending mode. The reason I used this is to control the intensity of the vignette easily with a level adjustment. The effect I used is visible in the following image.

The process for the night view is mostly the same, except you should always pay attention to the light and colors, the contrast and spotlights with light trails. So for the color grading I chose a cold ambient light, with warm spotlights to popup in the viewer's eyes at first glance. As you can see I added enough detail to the shops and streets and people in the sidewalk to add more life to the image. I made a triad of warm colors to create more variation in the lights and also to not make the image boring after a couple of views. So let's take a look to the process. 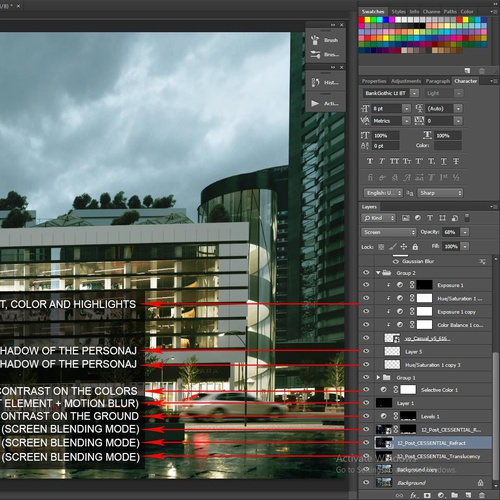 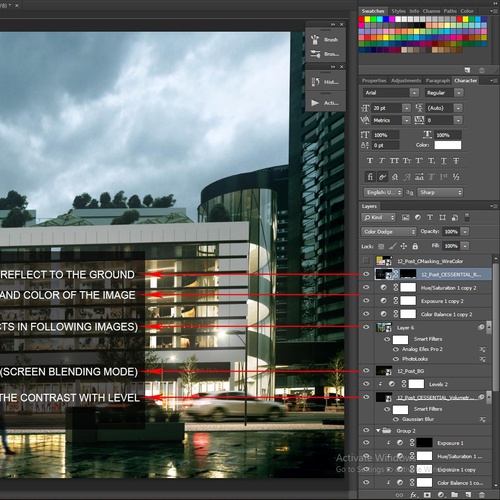 Mostly these kind of shots are a little bit more tricky than others. To create a good result everything is dependent on the background images you have. You should match the colors and light as it looks already in the existing image and accurately in the same place. At the beginning, as I had a dusky image, I started to make a dusky ambient light base on the image, choosing Blue Dusk HDRI from Peter Guthrie's collection. And for the inside of the building I used some spotlights to illuminate the interior light.

As you see there is nothing so big and confusing regarding make this kind of shot. But you have to remember that render elements have a big rule in post-production to add the detail and make the interior more visible. In the post-production workflow, we should make the effort to match the image with the render, so maybe as you can see you need to improve some parts like the windows in the different layers, and also match the contrast and color several times to achieve a final good result. But the techniques and using the adjustments are also like the previous shots, so it's not so hard to understand as you can also follow the images to see what happened. And now let's see how the post-production proceeded.

It is so much better to have a reference for everything in your workflow, in terms of mood, lights and shadows, color grading, and so on. So as I see in many of the beginner workflows, they mostly guess these factors and that's why they don't always achieve a good result.

Nowadays, it's not so hard to attain good and high quality assets cheaply, so as long as you can collect high quality assets, do this favor to yourself and increase the level of your output with high-quality images, textures, and 3D models.