Hi there! My name is João Victor Ferreira, I am a character modeler from Brazil. I did this image as a personal project, the goal was to show Nelson, a little nerd boy that wants to be the first to answer the teacher's question being the only one in the class.

When I decided to model Nelson, my goal was to make a cute character, so I knew that I had to work not only on the shape but on the expression too. I modeled Nelson in ZBrush. First I did the volume then I adjusted the proportions, and finally added the details. When the model was ready, I exported to 3ds Max. I also modeled the hair because I wanted to have an overview of the hair and to use some guides based on the hair loops to apply the Ornatrix system. 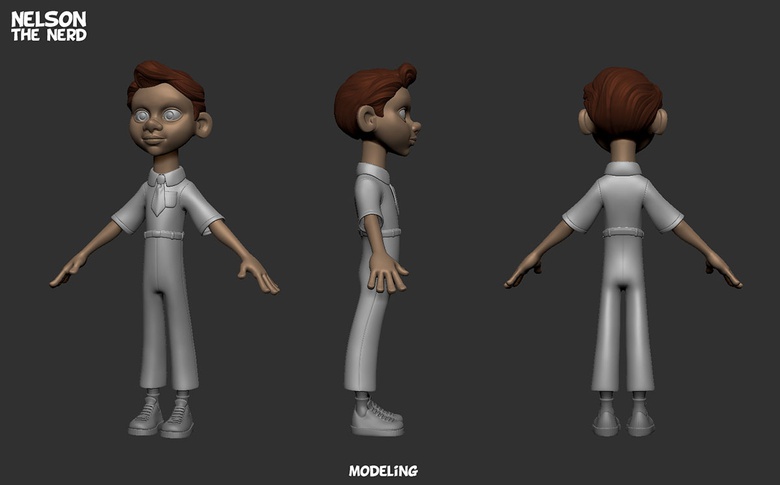 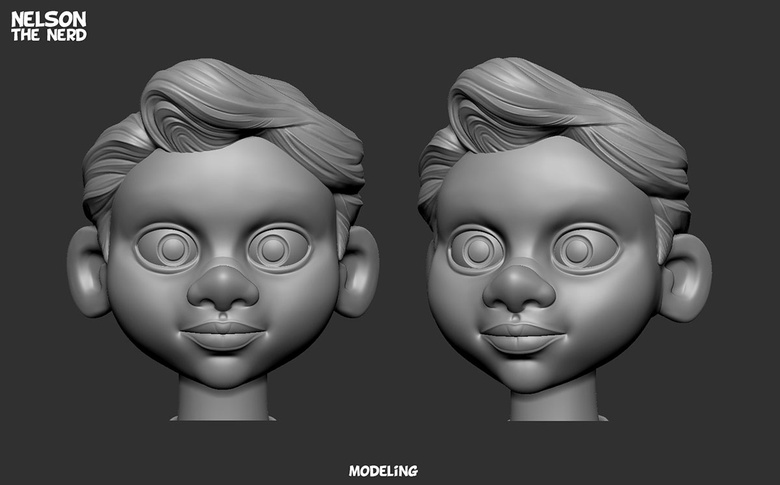 I started to model Nelson from a basemesh, so I saved a bit of time because I did not have to do all the retopology, just some adjustments like some new edgeloops and cuts. In this image you can see the edge loops of the mesh. I used 3ds Max for make this small adjustments. 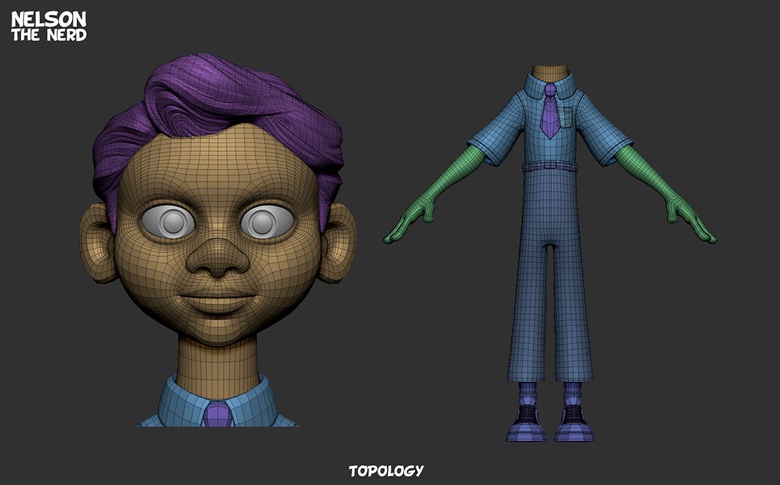 I was not planning to animate this character, so I did the rigging just for posing. I made an IK/FK blending system for the arms, a hybrid spine that has FK and IK systems allowing the character bending, a simple traditional reverse foot and simple controls with blendshapes for the facial. 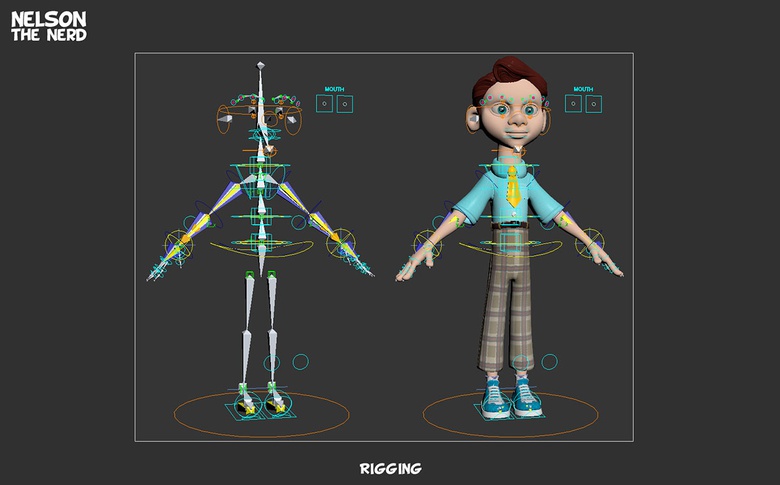 The classroom was made quickly because there are many repetitive objects. I also put some Easter eggs like the name of my wife and some works made previously. I tried not to do much detail in the classroom, while keeping the same level of details for Nelson. 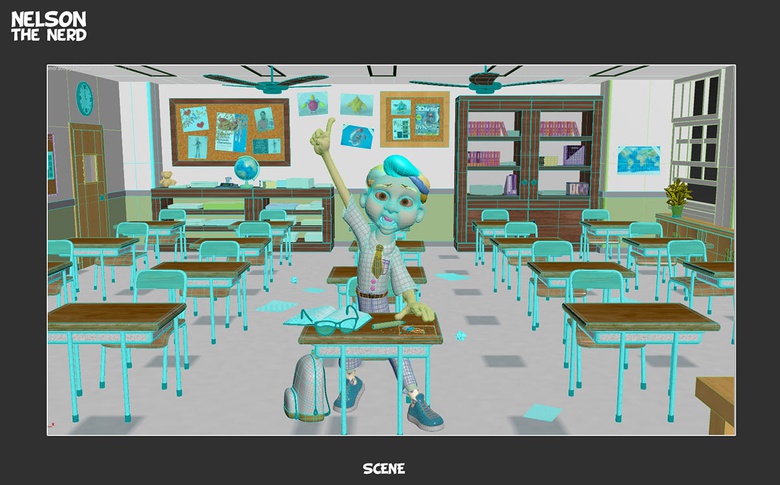 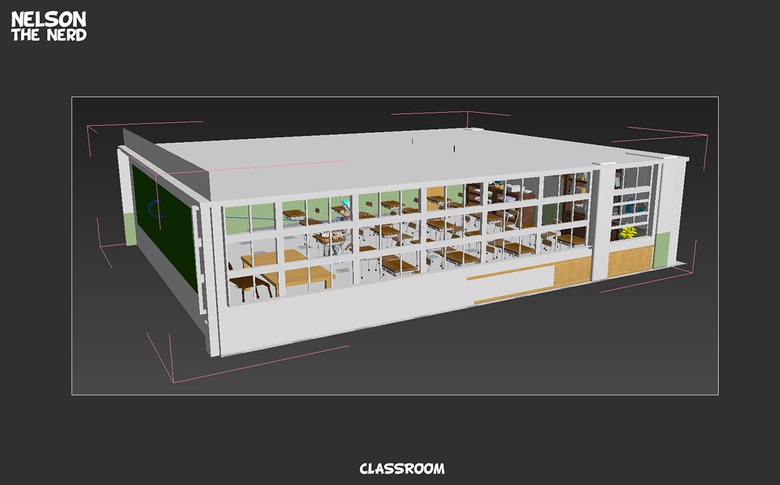 I used the V-Ray renderer to make the shading of this image. I painted the maps in ZBrush, like the diffuse for the skin, and painted the maps for the clothes in Photoshop. I also used ZBrush to extract the details like small wrinkles on the lips and nails as normal maps and displacement maps. 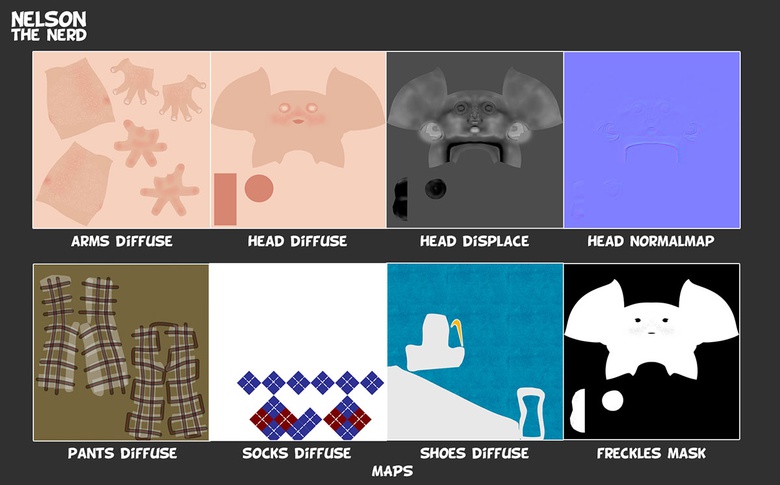 I did the look development for Nelson using V-Ray, so I put a dome light with an HDRI map inside, and a backlight to check the light behavior on the skin. After creating the lighting, I started to set the shading. I used VrayFastSSS2 for the skin and VRayMtl for the clothes. For the skin shading, I liked the falloff map in the SSS Color channel, setting the second map brighter with the output function, it gave a soft appearance.
Image to illustrate step 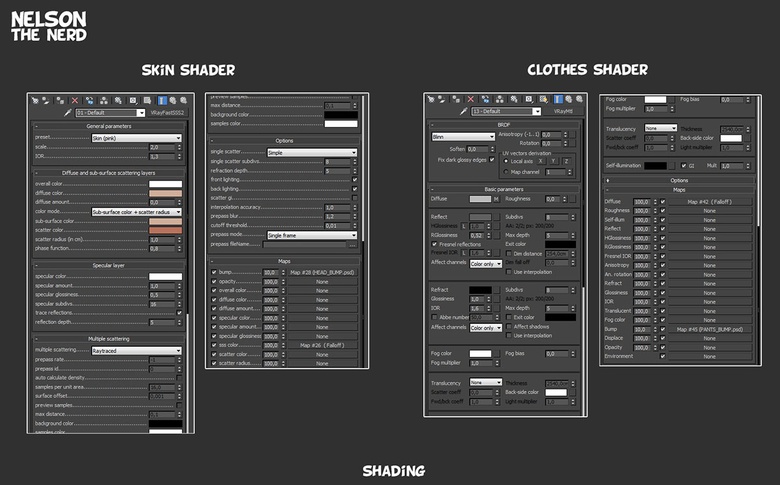 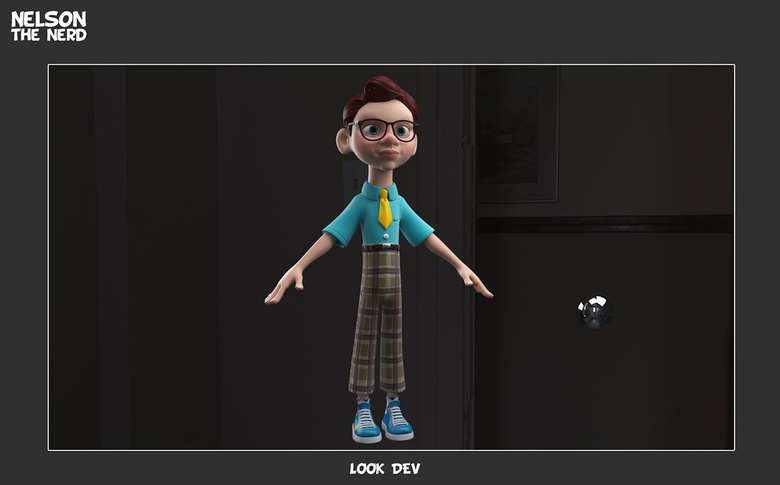 For the scene lighting, I used many V-Ray Planes on the ceiling to fill the environment. In addition, for the main light I used V-Ray Sun and then a Sky. I put the V-Ray Sun a little bit down to make an almost sunset appearance. I positioned the Sun so as to illuminate one side of Nelson's face, generating a contrast of shadow/light on the character. 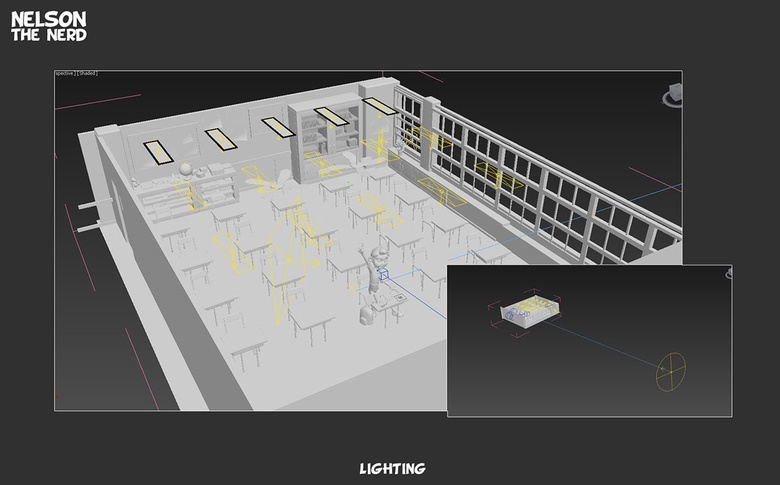 Text (50 -100 words)
I tried to create a harmonic composition using symmetry for the tables. I left more space in the rows that are at the center for keeping the character's silhouette alive. Also, for this reason I put some posters in the background positioned where they are. I placed the camera at this height to make a pyramidal shape showed in blue, using the vanishing point of the tables and the top of the character's head. I also divided the image into 3 parts, using it to divide the wall in white and green color. 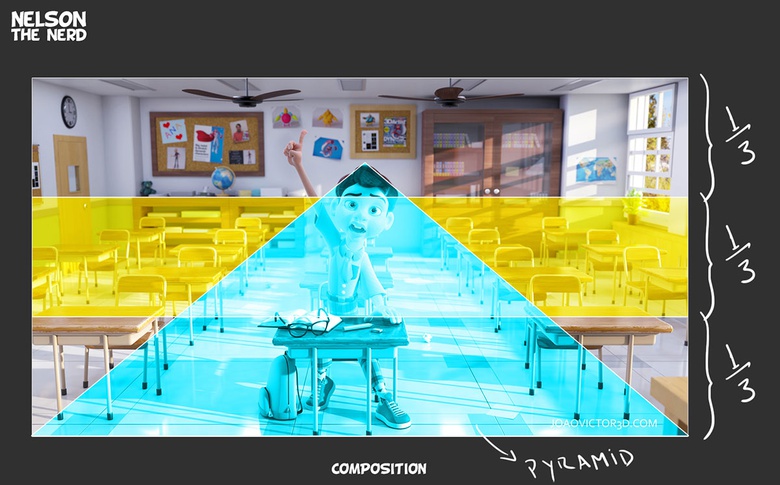 I did the post-production in Photoshop. For this task, I rendered some render passes like direct light, world normal map, ambient occlusion, volume light and specular. With the normal map pass, I selected the 3 channels for RGB separately, and put the masks inside curves, allowing the control of light based on the world co-ordinate. I did the same for the ambient occlusion pass, selecting by the channels, and putting inside a curve and then inverting the mask. 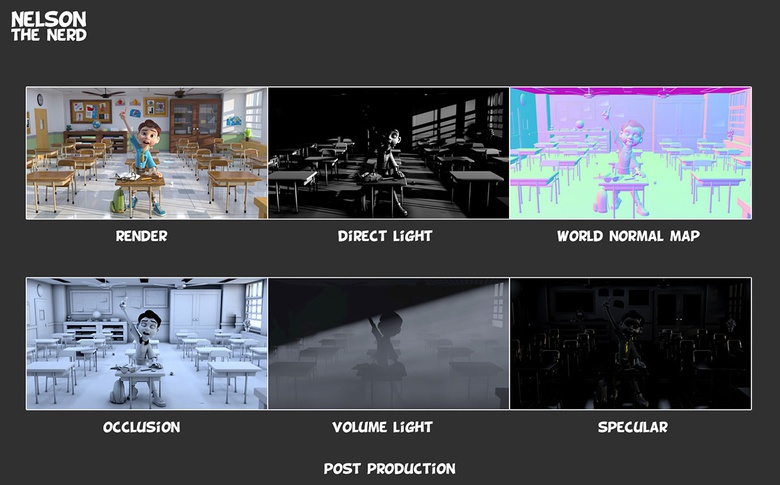