Firas Ma’ayah takes us through the 3ds Max, Substance Painter, and V-Ray process behind his detailed historical interior…

I started this project as an exercise in 3ds Max with a V-Ray and Substance Painter workflow. This later became my favorite and most detailed of my projects. I wanted, in this scene, to create everything from scratch, as best as I could, and I tried to pay great attention to the small details as well as to the overall composition. Below is a brief rundown of my workflow and making of process. If anyone has any suggestions or questions, I’m always happy to learn as well as help.

I started by blocking out the initial scene, a sketch of sorts, to have a rough idea of what furniture pieces I’m going to model, where they are positioned, and their scale. I also added a camera and chose an initial camera angle, and placed my blocked-out pieces; creating a sketch of the composition, and the initial lighting as well. 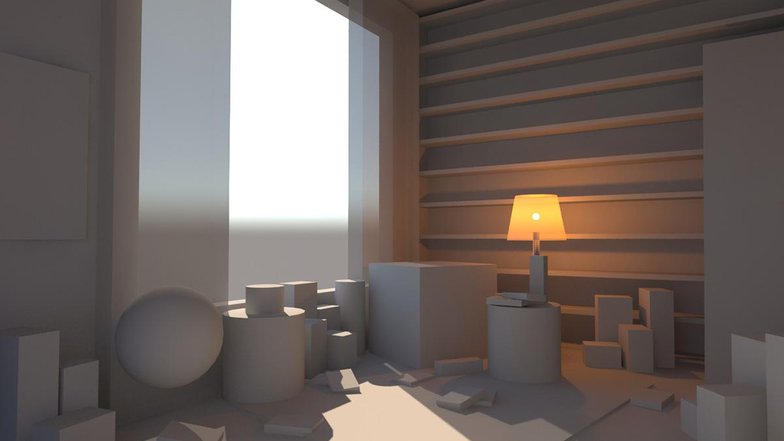 Blocking stage, it looks totally random, but I had a solid idea of what each object was supposed to represent

I had a pretty good idea of the general image and antique look I was going for, so after some research I found out that the Louis XV style for antique furniture was the closest to what I had in mind. The best reference images were from antique shops, showing the products from different angles, so that gave me a pretty good idea how each piece would look like. Most of them were a combination of different elements from different references put together. 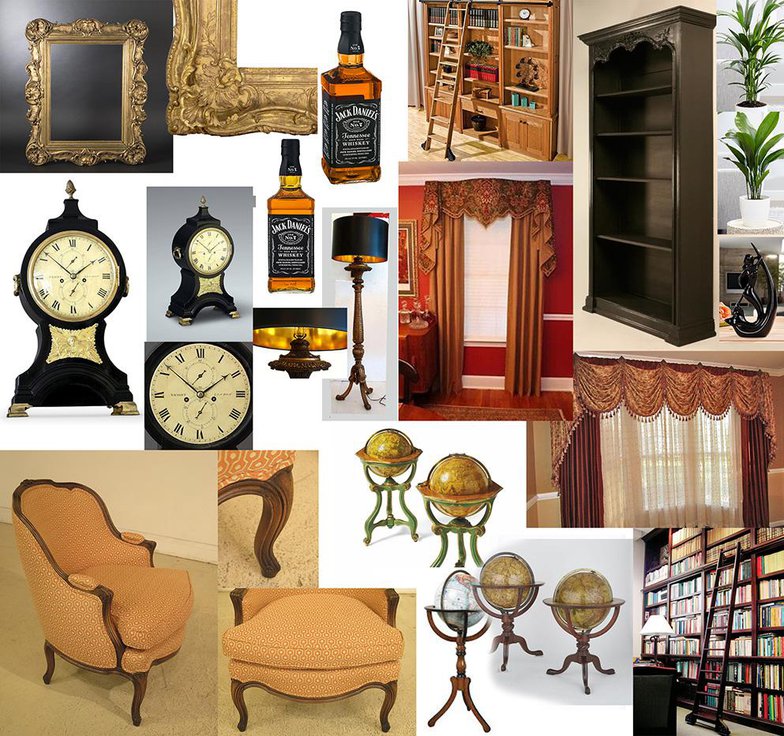 A sample of the different references I used

To start with the modeling, I split the project into chunks for easier handling and modeled each furniture piece in a separate file, later merging them one by one to the main file. All the furniture models where modeled entirely in 3ds Max, and all the cloth pieces where simulated in Marvelous Designer. 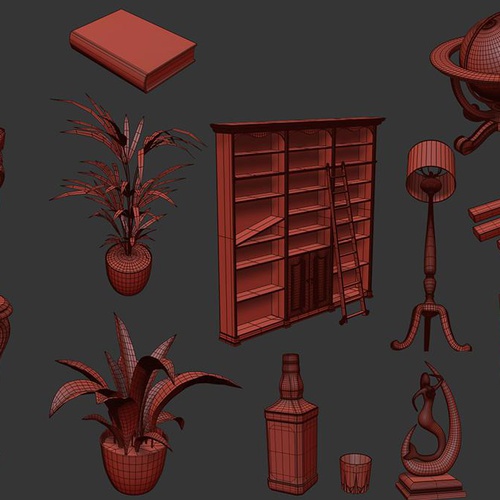 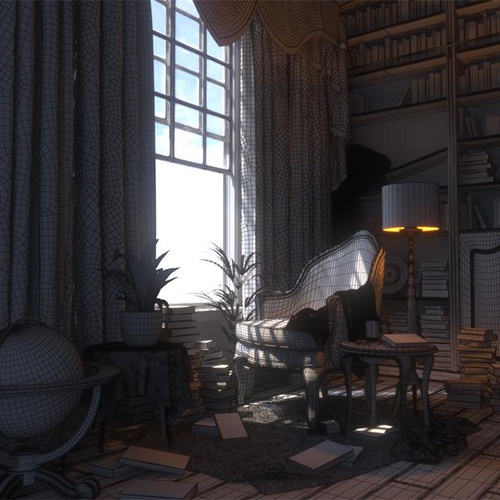 While modeling, I kept the Substance Painter workflow in mind, the poly count was kept to a minimum, and any excess polygons were removed like the backside of the painting frame, because they would take away from the resolution of the overall texture in Substance Painter.

After modeling each piece, I unwrap it with 3ds Max’s UVW unwrap modifier. Most of the unwrapping was straight forward since the geometry was mostly medium poly. After unwrapping each part, I attached the different parts together and kept in mind the eventual texture resolution; as such, I split some of the furniture into different objects, to keep the overall texture quality high. Instead of only using one texture set for the whole furniture piece, I used multiple sets for different parts of it. 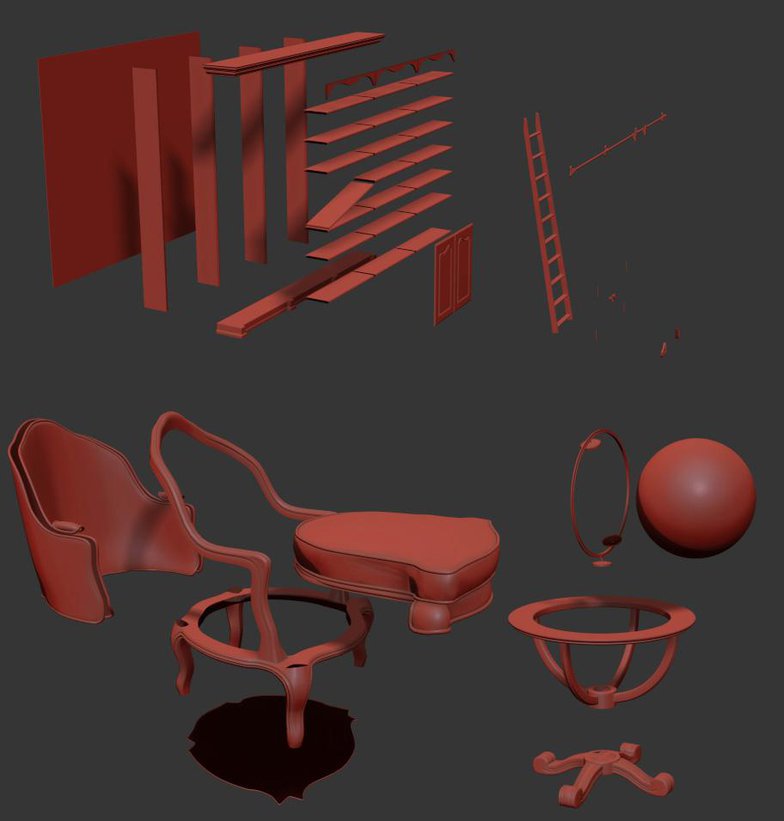 For the lighting, the main light was a V-Ray sun with a HDRI dome light from HDRI Haven and a Sky portal for the window for better light penetration. For the lamp, I used V-Ray Mesh light with a warm color, countering it with a low diffused light with a sky-blue color behind the camera, making it ignore the backwalls.

As most of the materials were going to be dark, and to prevent the sides of the room from being too dark, I kept the back walls close with a light reflective simple material, so that more light from the sun is being bounced around. Because of this I needed to place the camera outside the walls, otherwise there would be too much distortion, so I made the back walls invisible to the camera while placing it behind them.

The lighting setup of the scene

All the materials and textures were created in Substance Painter. Most were mostly straight forward with some dirt and wear masks. The wood materials were a combination and edit of Mario Della Bona’s Wood pack. I also used Jonas Ronnegard’s amazing ornamental brush set all over the place to give that antique look. In 3ds Max, most of the materials were plugged in directly from Substance Painter, but for most of the cloth materials I added a falloff to give a very light self-illumination, to give a bit of an edge to define the folding of the cloths. 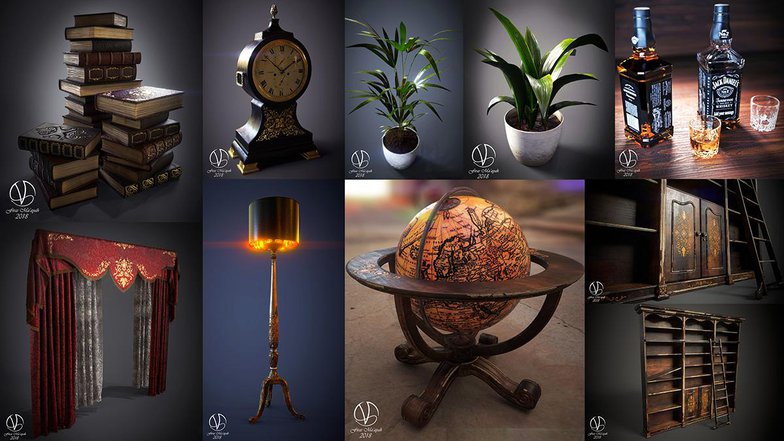 A sample of the different furniture objects with there materials, rendered with I-Ray within Substance Painter

I set up my rendering settings to use irradiance map with light cache for GI, and set it to progressive with Denoiser and rendered in 4K resolution. In Photoshop I did some basic color editing and tuned the colors, the brightness and the contrast of the image. I added a vignette effect and some light rays coming from the window. 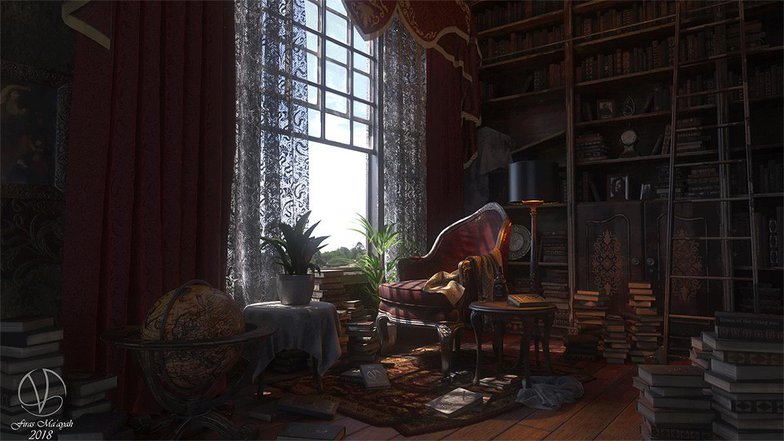 The post-editing process in Photoshop