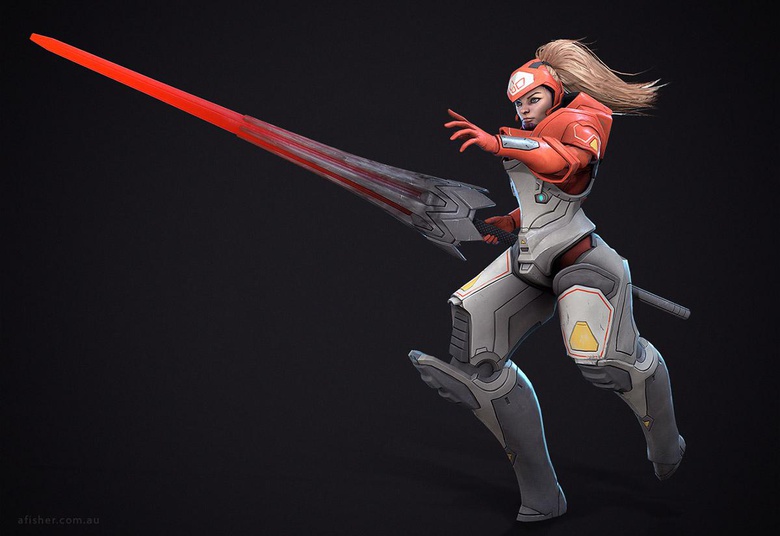 In this chapter of the tutorial I'll be covering creating the low polygon model in Maya 2014. I'll focus on a few key areas and I'm going to aim for around 20k tris, so we're not too limited by the poly count.

With the decimated ZBrush objects imported, we'll begin the retopology process, starting with the face. I like to work on different parts of the face and then connect them together. Start with the eyes by using the Quad Draw tool in the Modeling Toolkit to plot out the first edge loops running around the eyes. Select the edge loop and extrude the edge loop outwards, along the surface and away from the eye. Add extra edge loops as needed by Shift + LMB with the Quad Draw tool.

Starting at the lips, the topology should flow around the mouth and expand outwards. There should be an edge loop that flows from the edge of the nose, following the direction of the nasolabial fold down towards the chin. 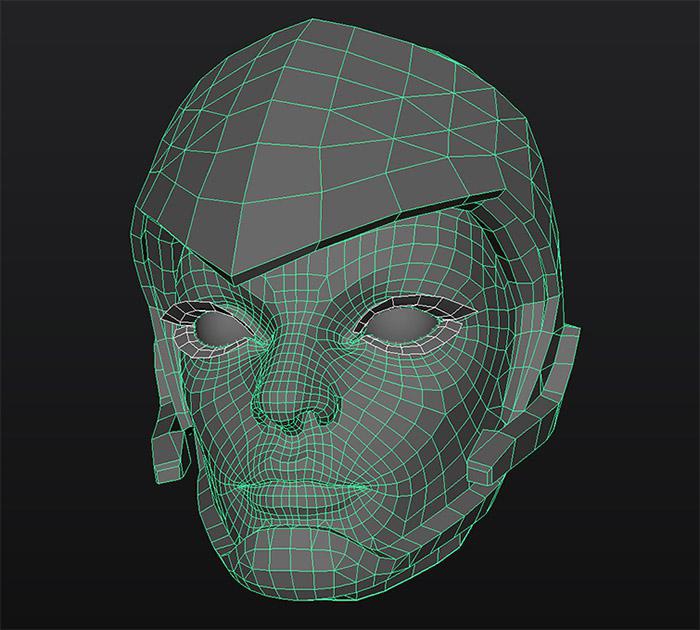 For the armor torso, begin adding vertices where they will be needed so that the silhouette and the shapes read well. Try to keeping the topology flowing in the direction of the major shapes of the armor. The normal map will take care of the details, so there's no need to add the panel details. It's a good idea to plan where you want to put the UV seams so you can create continuous edge loops for them as you go. 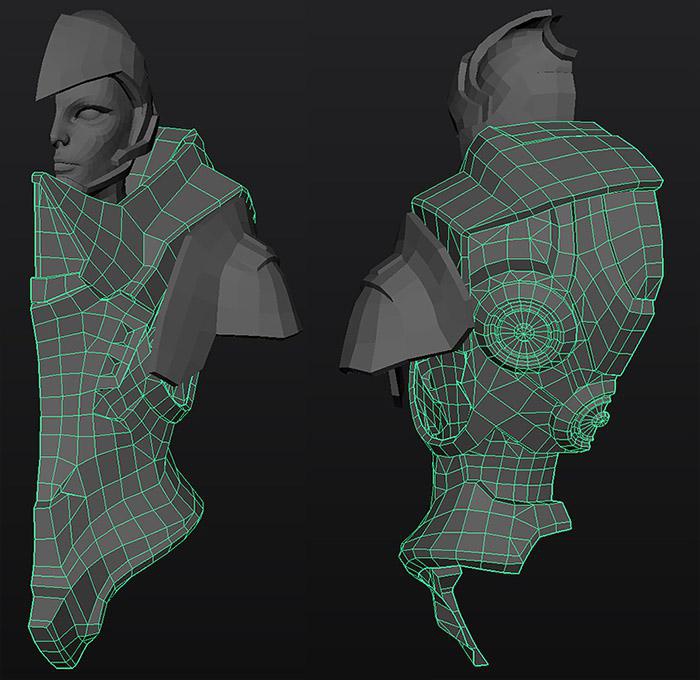 Step 3: Work out the arms

With the exception of the shoulder and elbow armor meshes, the arm is actually split into 2 meshes. The first mesh is the upper arm (which is connected to the torso) and the second mesh is the lower arm and hand. The topology should flow around the top of the shoulder/underarm and down the arm.

Try to maintain this flow down the arm through the armor plates. Add some extra edge loops around the elbow for deformation and extrude down slightly to hide the end of the upper arm where it meets the lower arm armor.

The lower arm is separate from the upper arm. Create an edge loop beginning at the top of the lower arm plate, closest to the elbow, and continue extruding down towards the wrist. You may need to merge some vertices if the topology gets too crowded. 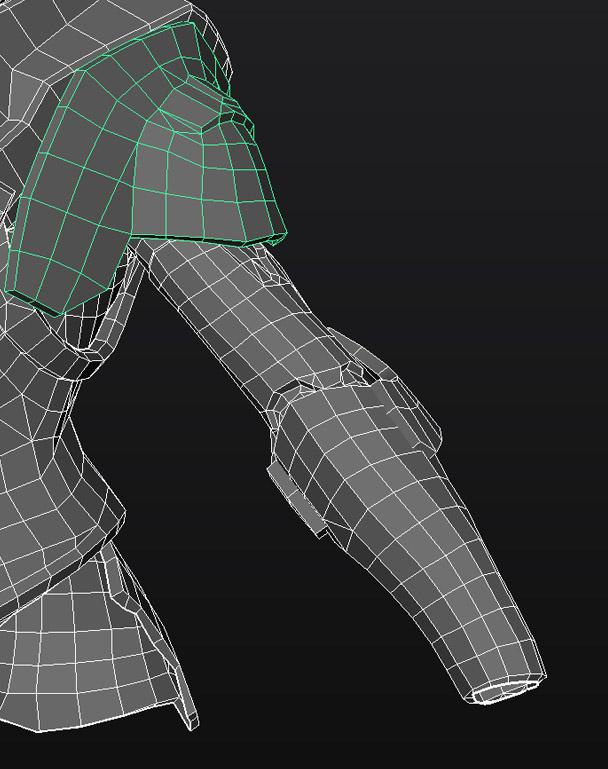 Create a cylinder and delete the caps from both ends. Roughly scale and position the cylinder to match the index finger. With the ZBrush hand mesh selected as the Transform Constraints > Other Surface in the Modeling Toolkit, move the vertices of the cylinder to snap them to the ZBrush mesh. Add edge loops around the knuckles to allow for deformation.

Next, duplicate the finger mesh, and position and scale into place for the remaining fingers and thumb. Adjust the vertices for each finger and then combine (Mesh > Combine) the fingers into one mesh.

The upper leg is connected to the torso mesh, while the lower leg and feet are separate objects. Follow the flow of the shapes in the armor. Once again, try to keep in mind where you UV seams are going to go. The majority of the leg is hard surface and limited in movement; however, have at least 2-3 edge loops that flow around the crotch and upper leg to allow for deformation.

When creating the feet, make sure the geometry is extruded up into the lower leg so that when the foot rotates, the end of the mesh isn't seen. 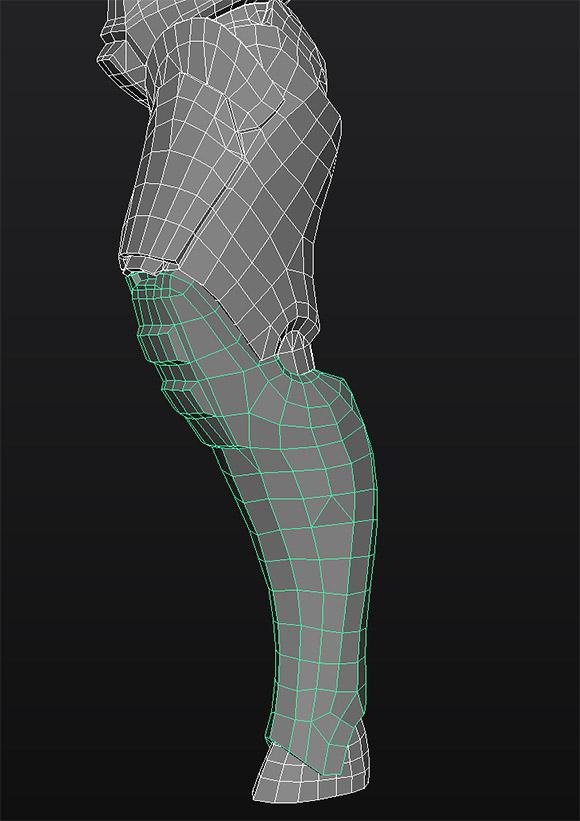 I generally block in a few hair strips during the low poly modeling phase and add more during texturing - that way I can see how much is needed and how the alpha is working (the image shown is the final hair mesh).

Start by extruding a cylinder and shape it into a rough ponytail (use the ZBrush placeholder sculpt as a guide). Select a loop of faces running down the cylinder and Mesh > Duplicate Face. Apply a Planar map (Create UVs > Planar Mapping) and edit the UVs so that the UV borders are straight and aligned. Doing this now saves time later. Duplicate the hair strip around the head and use Soft Selection to reposition and manipulate them into place. 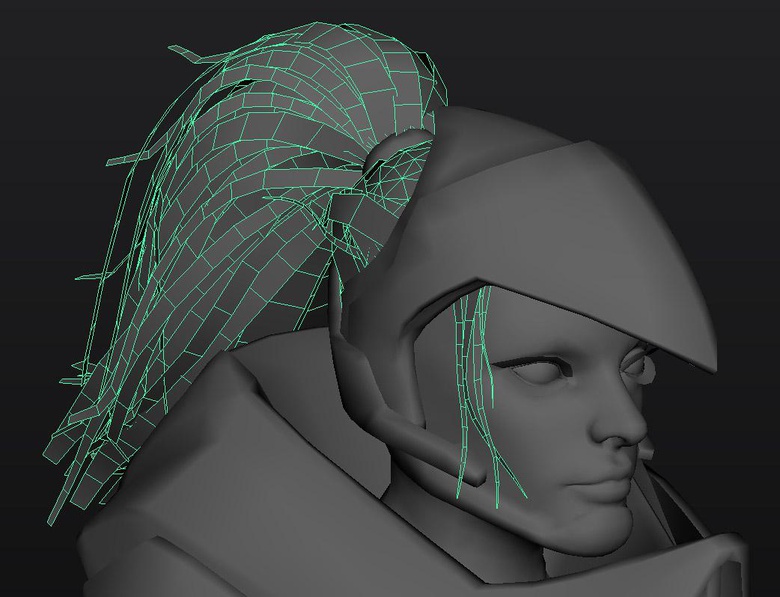 Once the low-poly model is complete, check for any errors in the geometry and that the Face Normals (Display > Polygons > Face Normals) are facing the correct way. 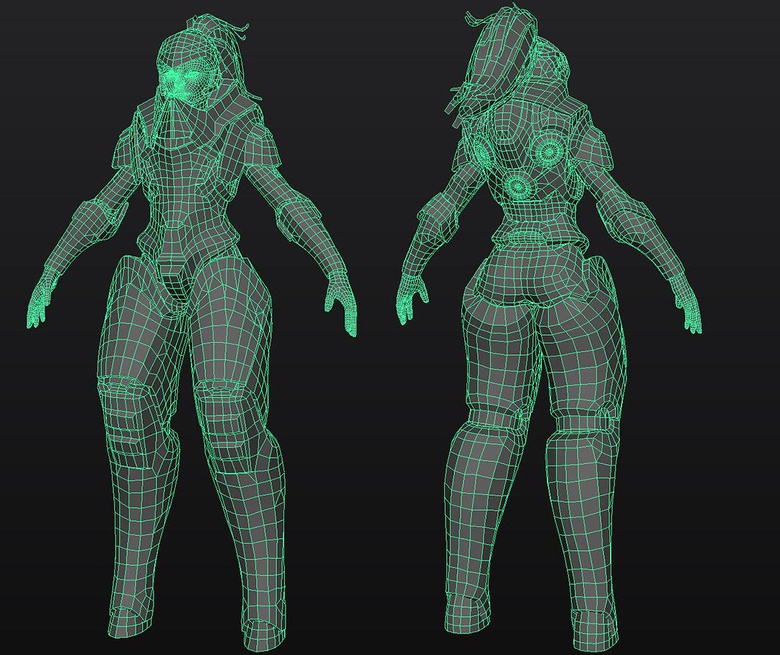