Create a female League of Legends character in ZBrush

Vahid Ahmadi takes us through the ZBrush and Photoshop process for creating his League of Legends-inspired Diane character..

I started with a free base mesh from free software called make human. For modeling the hands I used zSpheres within ZBrush and then connected them to the base mesh using curve bridge and zModeler. I then modeled everything else using zSphere topology, the topogy brush, masks, and so on. Then finally I polypainted her using ZBrush and Photoshop ZAppLink. 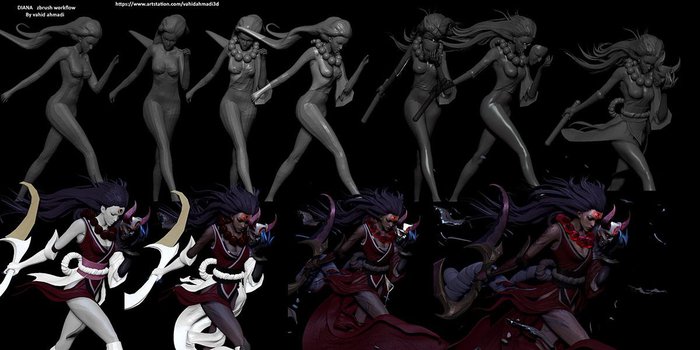 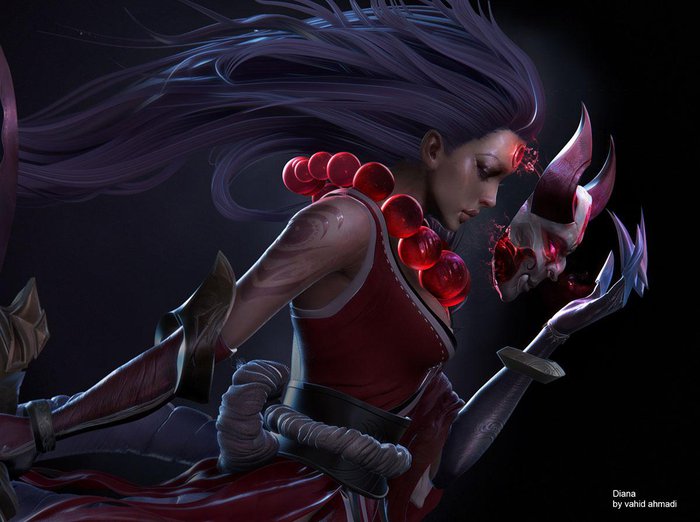 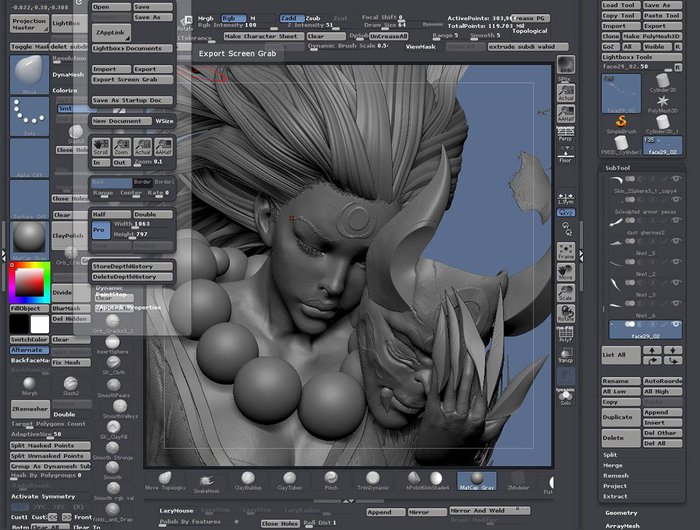 The IMM hair that I used for Diana's hair is available for free download here.

I sculpted some tattoos on the legs using the standard brush with a combination of trails in brush modifiers, and lazy mouse with low intensity, and then I painted with trails both on and off using the color picker. In ZBrush I painted some highlights and then used ZBrush 2.5d brushes to add more depth.

I used ZBrush default alphas, alpha 2 , 16, 28 with some noise located in alpha modify tab. I also used different focal shifts with different RGB profile curves to sharpen the lines of the tattoo borders.

Load one of the chromatic matcaps such as ZBrush chrome c and then load the spherical glass texture in the texture slot. Change the values to your liking, and one important thing is you must have a little sculpted detail on your mesh so it has better reflections, then you can use spotlight, ZAppLink , and so on to add more texture.

You can also use any texture and use Photoshop filters (Distort/Spherize), and then in ZBrush or Photoshop you can add dirt textures and other materials to add more depth. 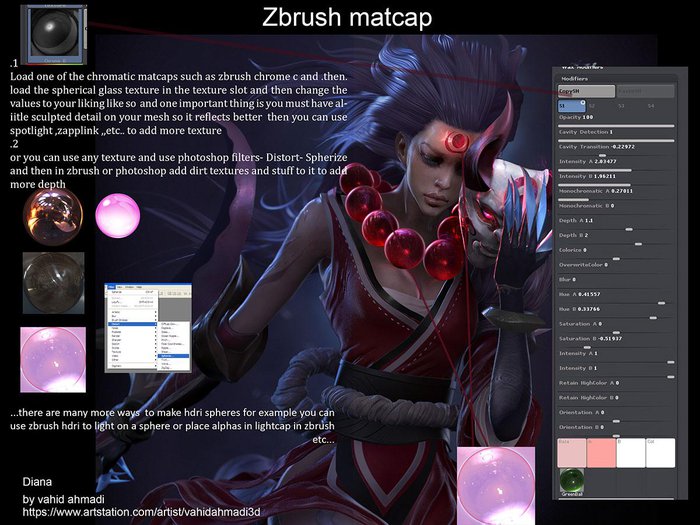 I used ZBrush ZAppLink for some use of Photoshop as well, and I used some free alphas from Pixologic and played around with them until I was happy with results. 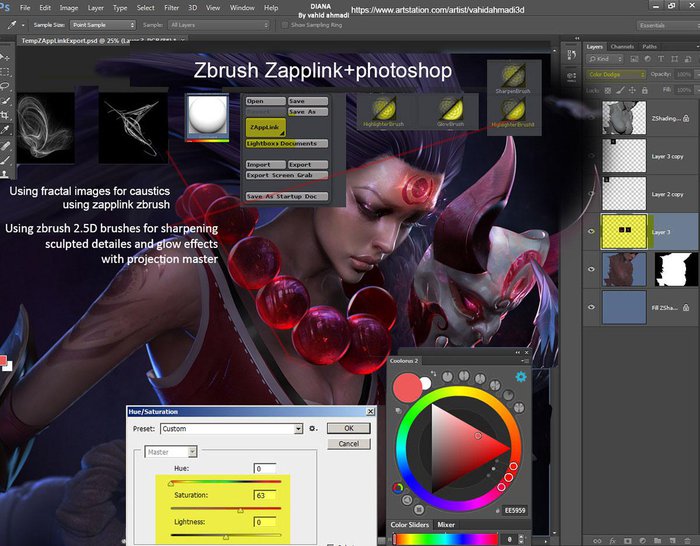 Sharpening and enhancing in ZBrush

You can sharpen your sculpted details in ZBrush using very simple methods. Basically whatever you use negatively in ZBrush, for example the smooth brush with ZSub, it will sharpen. Also, you can record a layer and smooth the areas you want to enhance, then use a layer slider with negative values to sharpen it. 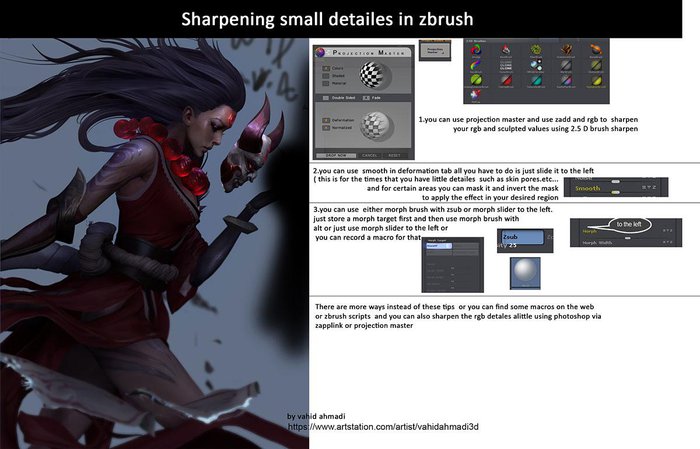 Use of ZBrush surface noise

I added some surface noise in ZBrush to make fractal noises for the armor areas on diana, as it's shown in the images, and its very simple to do. 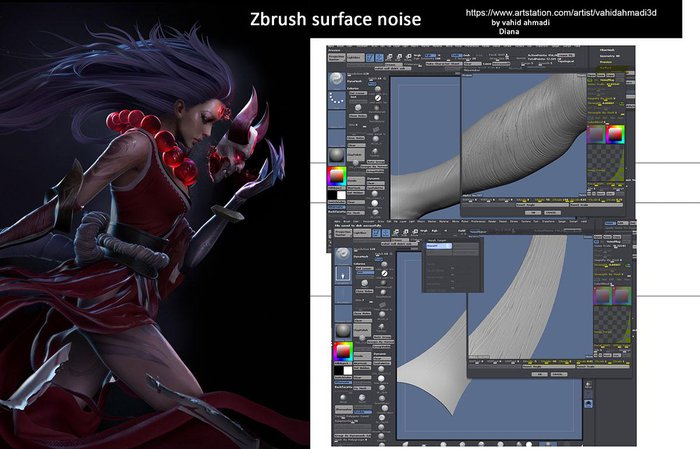 Well, I started composing different passes inside of Photoshop, and also made selections for choosing different parts and cleaning extra parts that I didn't need. I then began to mix the shadow pass, AO pass, paint pass, and other, until the look began to come together, using various layers such as Linear dodge, Multiply, Screen, and Overlay. It's only a matter of experimenting and going back and forth between the layers. 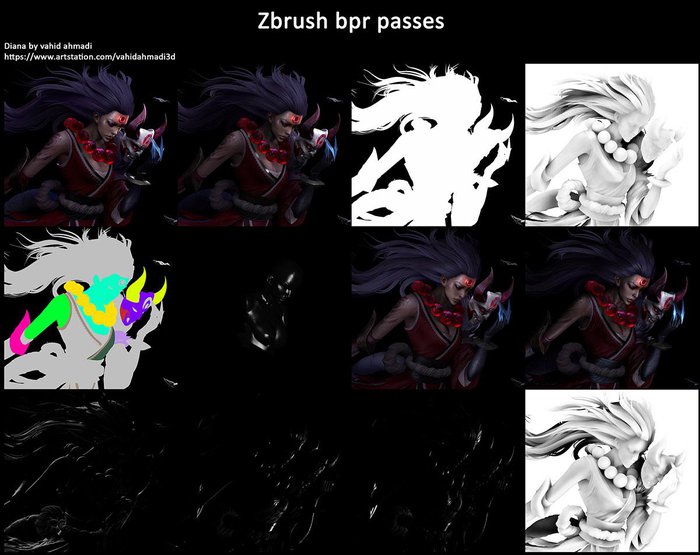 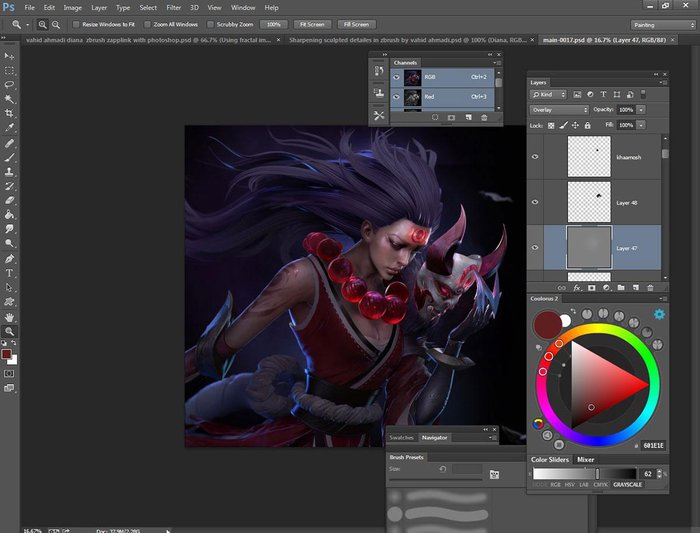 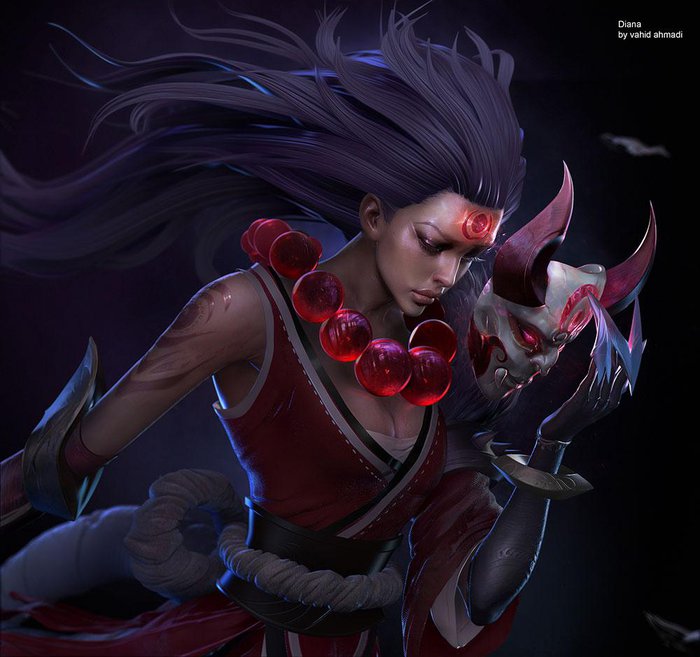 Check out Vahid's other making ofs

Grab a copy of Beginner's Guide to Digital Painting in Photoshop: Characters