Dmitriy Eremenkov reveals how he evoked the power of the elements to create the impressive landscape scene Cataclysm using Vue, 3ds Max and Photoshop

Dmitriy Eremenkov reveals how he evoked the power of the elements to create the impressive landscape scene Cataclysm using Vue, 3ds Max and Photoshop

The first thing for me in any project is the idea. I wanted to create something dynamic and realistic, so I decided to ignore the laws of physics. My priority was to create more action in the scene, so I focused my idea on a massive tornado with a giant whirlpool and several ships torn apart by the strong wind. I wanted some ships to be sucked into a vortex.

To start, I made a quick five minute sketch to work out the composition and amount of work involved. From this sketch, I saw that I needed a panoramic view to catch all areas of the scene that I wanted. The panoramic camera in Vue is an excellent feature that gives you the ability to create epic widescreen renders.

The next thing I made was a 3D whirlpool. This is actually an easy task for major 3D packages like 3ds Max or Maya, but I really wanted to make this thing completely in Vue.

Because there is only metablob-modeling technology in Vue, the only way to make it was to create a height map for the terrain. So I created a grayscale map in Photoshop, and saved it out as 16bit (to save all the gradients without banding), with a resolution of 2048x2048.

After that I created a standard terrain in Vue, changed its resolution up to 2000, and used the height map.

Terrains are a really cool feature of Vue. I always build whole landscape from lots of small standard terrains because it gives me more control over the topology of my landscape. I never use procedural terrains because they are too slow and buggy in big scenes.

The front cliff consists of two ecosystems; the first ecosystem has several samples of palm trees in the foreground, and the second ecosystem has 3D models of small stones and patches of grass, to add nice detail on the ground.

I modeled a radio tower in 3ds Max to determine the scale of the foreground.

For the distant landscape, I used the same technique, except that the trees were low poly. I used a ventilator object in Vue to bend the trees because I wanted to show the strong windy weather in my scene.

The landscape created in Vue so far

The sky was done in Vue with three layers of clouds; these all had different heights, density and mass in the sky. Vue clouds are truly magnificent, though takes a long time to render them.

I rarely use meta clouds – they're nice when you need to create one single beautiful cloud with a specific shape (because the cloud layers in the Atmosphere editor are just Extruded Fractal noise with a volumetric shader, it's hard to control the shape), but with more than one meta cloud, the render time slows dramatically. The more cloud layers you have, the slower the rendering will be.

If you turn on the object's Anti-Aliasing, the clouds will be anti-aliased again, because they were already anti-aliased. So you lose lot of time. That's why I always render the cloud separately from other objects. The second trick is to render each cloud layer separately. You can combine them all in Photoshop together and erase any bugs in them.

Creating separate renders of clouds is much faster overall.

Ships and the city

All ships and buildings were modeled and textured in 3ds Max and then exported to Vue. There are 8 different ships, lots of differing buildings, helicopters and so on. This is just standard, routine work.

When using multiple images, there is always a problem of clones. If you have a batch of similar objects in a scene, it's important to make each one unique, otherwise it will simply look like lots of clones. You can spend a fair amount of time modeling different variants, or you can spend this time on the matte painting stage and overpaint these clones in 2D. 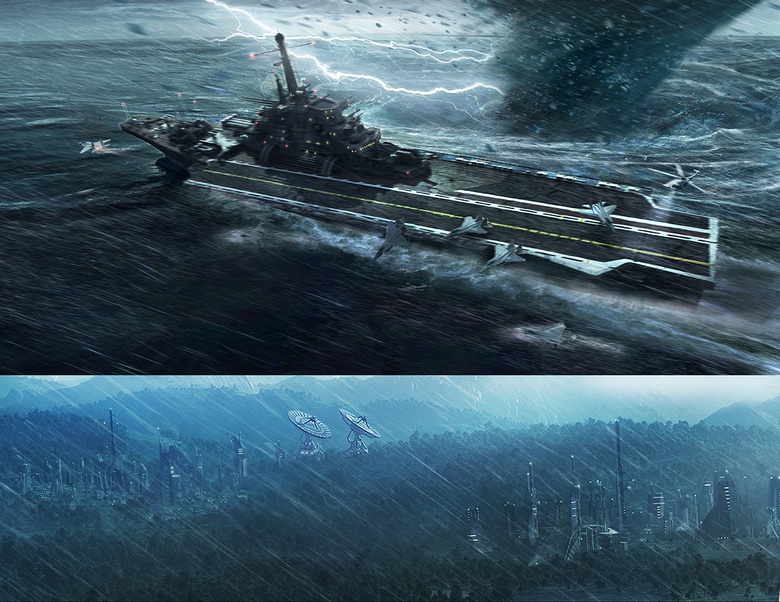 Close-ups of the city and ship carrier

Having studied a lot of references of tornados, I realized that they are not very interesting or detailed, so I decided to do a non-realistic tornado.

I used metaclouds in Vue to create the shape of a tornado and to see how the light will fall on it. Metaclouds are nice but they have no dynamic – they're just smoke. I created another object layer with some scaled metaspheres to determine a rotation. The tornado became a little more dynamic but still didn't look right, so the next step is matte-painting.

Settings of the metacloud shader and the organization of objects

It was then time to give the picture a Hollywood gloss. Most of my matte-painting time was spend on the two central objects – the whirlpool and the tornado. You need lots of high quality references to make a good matte-painting. You'll also need to understand some 2D techniques and how to depict light in a 2D scene, because lots of your references won't be with lighting you need and you'll have to redraw those. Burn and Dodge brushes in Photoshop are great tools for this.

Here are the renders and final result of the tornado 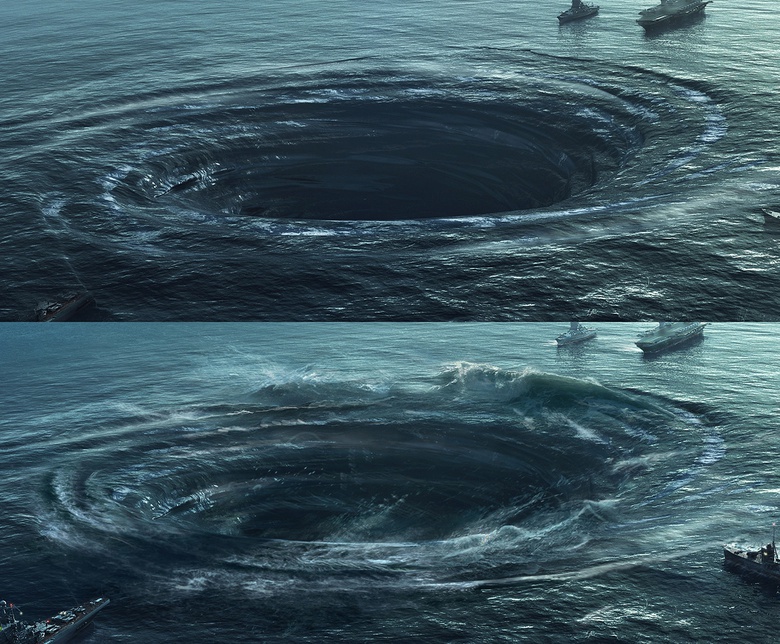 Here are the renders and final result of the whirlpool

The last thing is adding the dynamic sense and action in the scene. I decided to show dynamism by using lots of flying objects around the tornado and broken parts of ships. Some parts are big, and others are small. I applied Motion Blur to them, but in different proportions; for example, some flying parts were blurred with value 10, others with value 2, and others with value 25 and so on. This helped to create chaos and randomness in the motion of these objects.

I also decided to add some lightning around the tornado to make the scene more aggressive and concentrate the viewer's eye on the tornado. 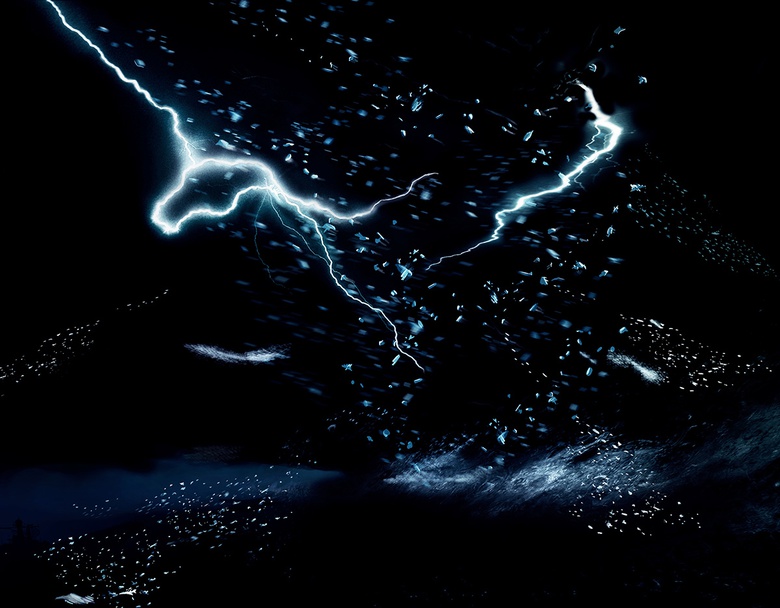 The layer of flying parts that creates dynamism in scene, with different sizes and different Motion Blur values.

Craft your own intense environments using Vue software….
See more of Dmitriy Eremenkov's work in his portfolio
Check out our ebooks for more advice on using Vue!