In this beginner to intermediate series we create a retro looking Iron Man using the free software that is Blender. In part 5, we look at advanced modeling techniques and modifiers…

We’ve now covered the Blender interface, some basic object creation and manipulation, as well as how to keep things organized. Now we’re going to turn our attention to something a little bit more advanced. In this part we’re going to take a look at modifiers. We attach these to objects and would you believe it... they modify the object they’re attached to. There are a ton of different modifiers and in this part we’ll take a look at just a couple of them in depth. They are the array and bevel modifiers.

An introduction to modifiers

Blender describes modifiers as ‘automatic operations that affect an object’s geometry in a non-destructive way. With modifiers, you can perform many effects automatically that would otherwise be too tedious to do manually (such as subdivision surfaces) and without affecting the base geometry of your object.’ This is a great introductory note and is packed full of amazingness that we’ll unpack in the coming steps. I love modifiers! 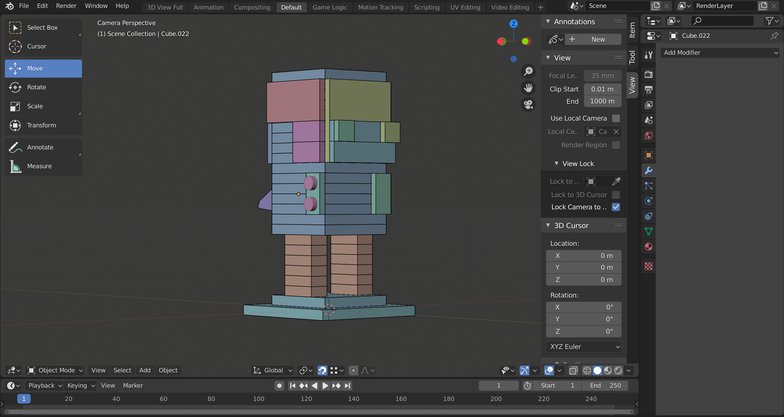 What modifiers are there?

There are a whole host of different modifiers that you can make use of and that will make your life easier and push your modeling to the next level. My most used are array, bevel, Boolean, and mirror. And what’s even better is that you can stack these modifiers on top of each other. You’re not just limited to one per object but can make use of multiple modifiers, editing their properties throughout your project knowing that they’ll always be there to remove, change, or add to. 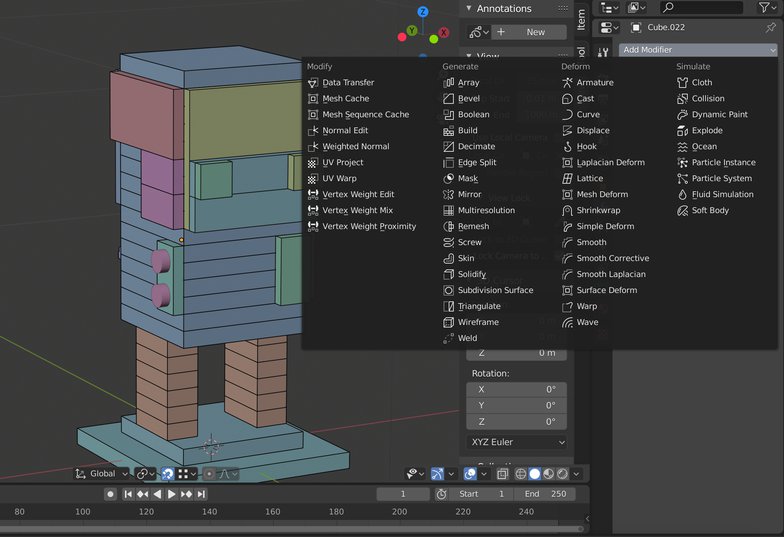 One of the biggest perks of modifiers is that they are non-destructive. This means that they don’t affect the geometry that they are attached to. So for example, if you add a bevel modifier to an object you will get all the benefits of the more detailed geometry without having to worry about the object getting too detailed. You could achieve a bevel within the geometry itself but then you’d be adding in an extra overhead of polygons to the scene. 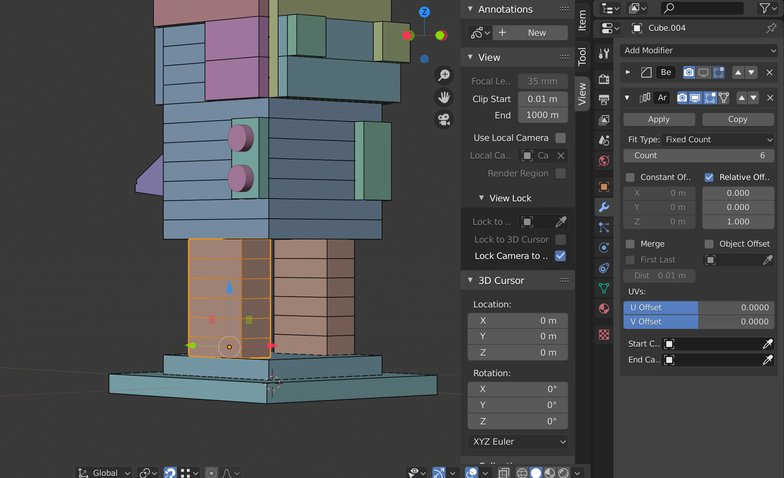 Back in a previous part we created all the basic bricks that make up our model. At that point you will have duplicated objects that were the same. This is a quicker way of doing it than modeling each one individually but it’s not as quick as using an ‘Array’ modifier. This modifier creates duplicates of the object they are attached to and displays them according to the offset properties that are set. 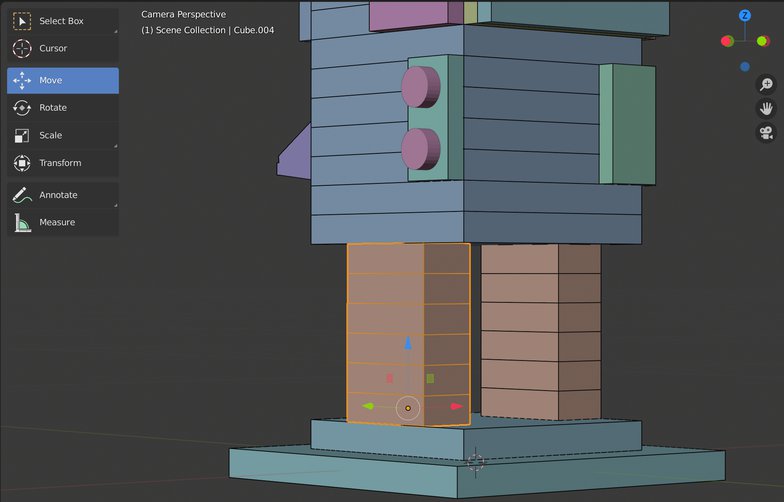 With the first/bottom brick of a leg selected, head to the ‘Modifier Properties’ panel which is accessed with the wrench/spanner icon. Once in there click ‘Add modifier’ and you’ll see all the possible modifiers available to you. Then simply click on the modifier you want to add. We want the Array modifier. This will now appear in the modifier stack. You can click where it says ‘Array’ and change its name if you like. 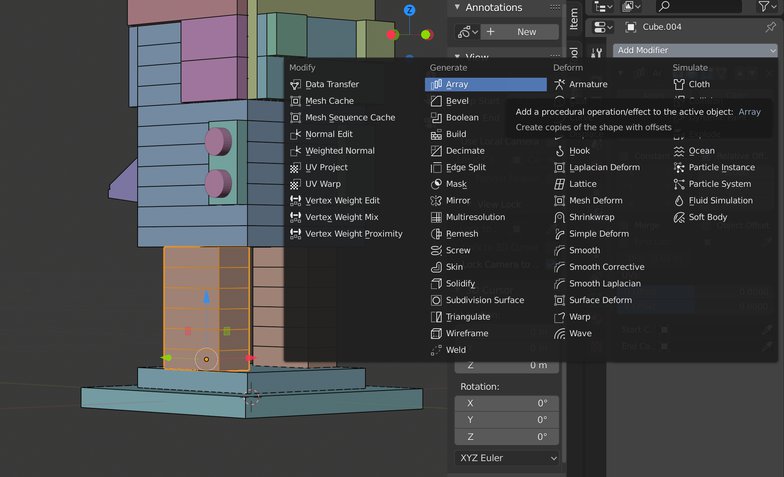 Add as many modifiers to an object as you want to

Visibility controls for the modifiers

To the right-hand side of the name of the modifier you have a couple of visibility controls. One is a toggle for displaying the effects of the modifier at render time and the other is a toggle for displaying the effects in the viewport. The viewport option is particularly helpful because as you stack up modifiers on multiple objects in your scene you might find that performance starts to slow down. Turning modifiers off in this way will improve performance. 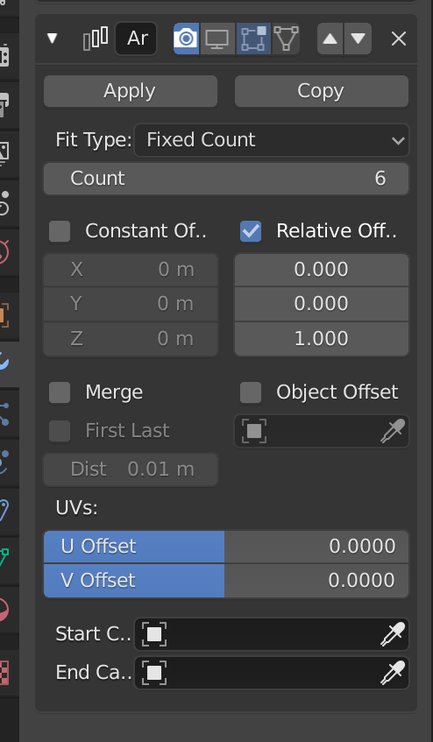 Adjust the visibility controls of each modifier individually

Modifiers have a set of properties that you can use to customize its effects. The array modifier begins by letting you edit the ‘Fit type’ followed by the number of objects you want in the array. For our purposes we want ‘Fixed Count’ followed by 6. 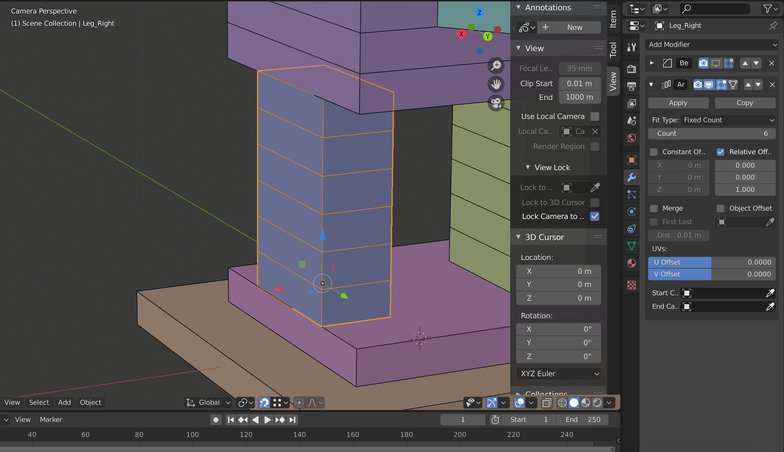 There are two types of offset in the properties panel. There is ‘Constant Offset’ or ‘Relative Offset’. Constant lets you set an exact measurement for offset where as Relative offsets it against the bounding box of the object. We’ll use the letter. In the ‘x’ axis set it to 1 and make sure the others are set to 0. This should give you a total of 6 leg bricks that make up the left leg. 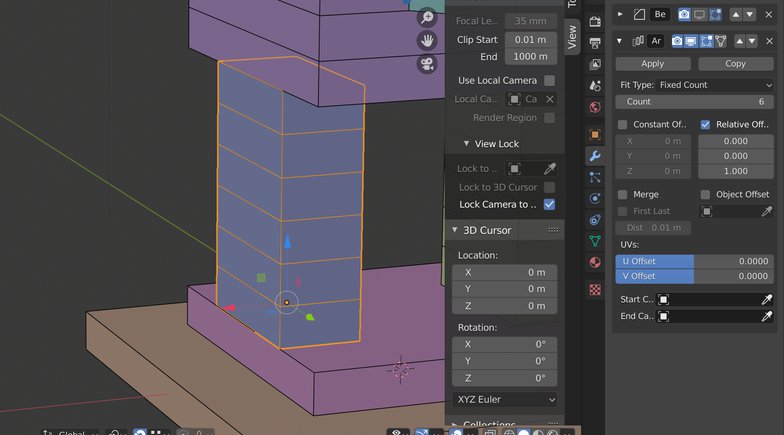 I hardly ever do this but if you want to destructively apply your modifier to your object then you can do that by hitting the ‘Apply’ button at the top of the properties rollout. You can undo this action using Blender’s undo tools but there will be a point where you can’t undo it and the change will be permanent. 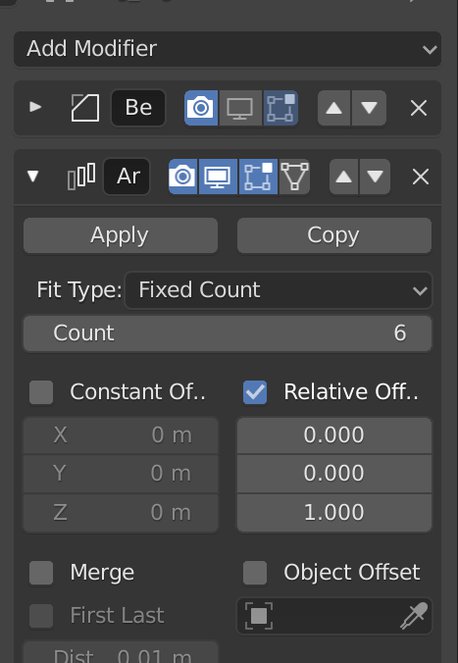 Apply a modifier if you want to make it permanent

When adding multiple modifiers you’ll want to make sure that you have them in the right order. This will ensure that each one is calculated in the order that you want. Each modifier will therefore be applied to the resulting mesh after the previous modifier has been applied. Modifiers are calculated from top to bottom. Use the arrows on the right hand side of each modifier in the stack to adjust their position.

Use the array modifier to get both legs in position as well as all the body parts. In the last part of this series we’ll use the Array modifier again to get all the brick ‘studs’ into place.

As previously mentioned there are a whole host of different modifiers that you can make use of. My most used are array, bevel, boolean and mirror. The best way to learn is to try them out. Add them on, change the properties and see how they affect your model!