Check out this free chapter from our Armored Beasts eBook. Learn how to create organic and non-organic elements in ZBrush, from the initial concept through to the final creation... 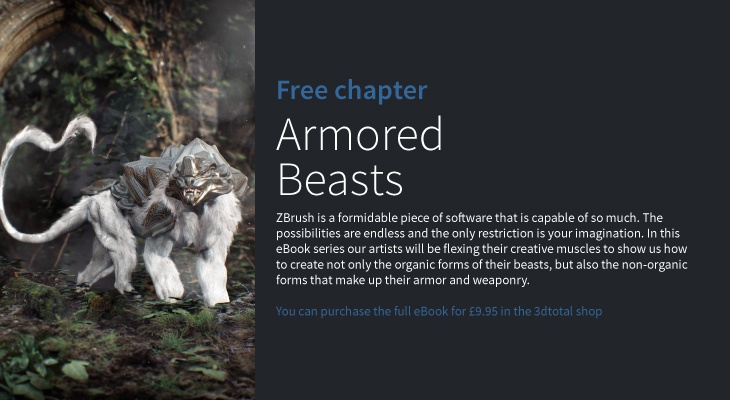 Check out this free chapter from our Armored Beasts eBook. Learn how to create organic and non-organic elements in ZBrush, from the initial concept through to the final creation...

My name is Christopher Brändström and I'm a freelance character/creature artist in the movie, commercial and gaming industry. What I want to show in this tutorial is a very basic, but effective, workflow covering how to do a basic concept process in ZBrush and composition in Photoshop. I'm going to give some pointers on what to think about and what to avoid, and look at using some additional software, to make a nice-looking final concept image.

Usually when I start working on a concept I need to have a general idea about what I want to create. The wonderful thing with concepts is that during your creation process, you are most likely going to stumble upon something that might change your image radically; something that you initially didn't think of. This happens to me almost every time and I just simply go with it and see where it takes me. Sometimes it might look like the most awesome thing ever, and sometimes it might look like terrible.

Usually when sculpting, I start off with a model from my library. If you're creating concepts you're not trying to show your skills as a lighting artist, modeler or texture artist. You're trying to show off an image as a whole picture. So why waste time creating something from scratch?

When creating this armored cat-animal, I thought I'd show how easy it is to create something from scratch using ZBrush R3b, rather than using models from my library.

Before the DynaMesh function in ZBrush, you had more or less four options to get started with a fairly even topology:

Now with DynaMesh, you can just start working off of a sphere. Stretch and pull it however you like, run DynaMesh and continue working with a nice, clean and even topology. Also, make sure to check the Projection button, so you can keep the detailed work when DynaMeshing.

Important: Make sure your mesh has the proper scale. If the scale is too big, you might end up with millions of polygons on the lowest DynaMesh resolution, which makes it hard for you to work. Always check this before you start working (Fig.01). 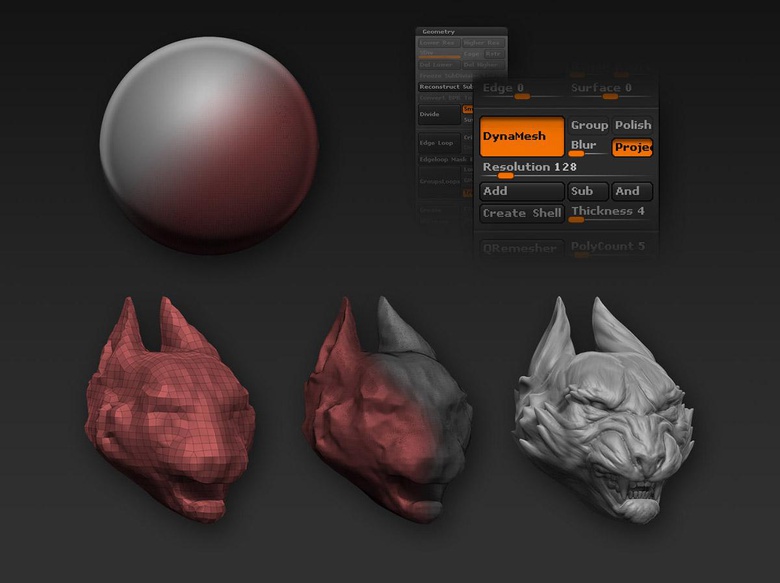 At this point I've gone through a couple of head designs using DynaMesh; starting off with one head, duplicating it, creating another and so on. Usually I use layers when creating different shapes from a single mesh, to keep the scenes small and easy to use. Since DynaMesh creates a new topology every time you use it, the layer function won't work and you'll have to duplicate the mesh instead.

After looking through the designs I choose to go with the first, more alien-looking head. My idea at this point is to make the armor natural, made out of the skeleton of the creature. I use the Clay Buildup, Insert Cylinder, Polish and ClipCurve brushes to achieve this result (Fig.02). 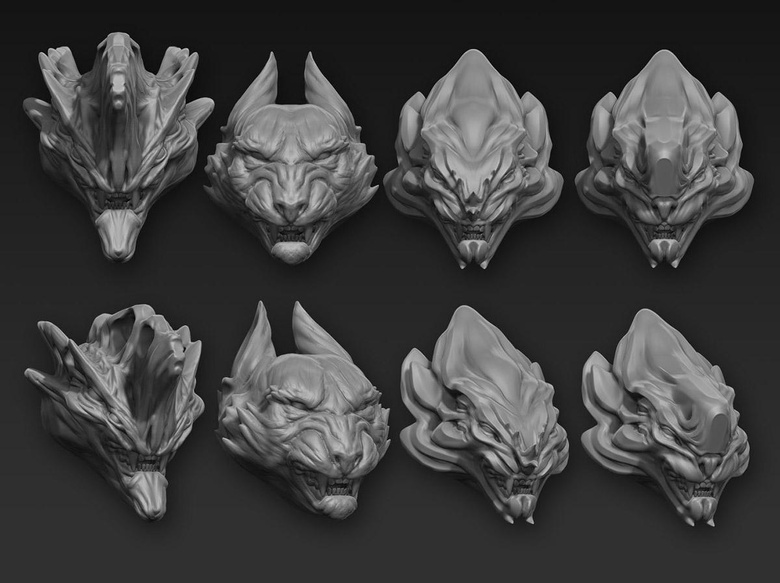 I'm still using DynaMesh quite heavily when creating the body. I have the head as a separate subtool and the body was initially just a sphere like the head was.

Before DynaMesh, I didn't use the SnakeHook brush as heavily as I do now. It has a tendency to create really cool, flowing shapes, but it always messed up the topology because of that. Now that's no longer a problem with DynaMesh.

As I did with the holes in the head, I use the Insert Cylinder brush with a negative option, which means instead of adding a cylinder when using DynaMesh it creates a Boolean, a hole, instead. I do this by holding down Alt when inserting the cylinder and then using DynaMesh (Fig.03). 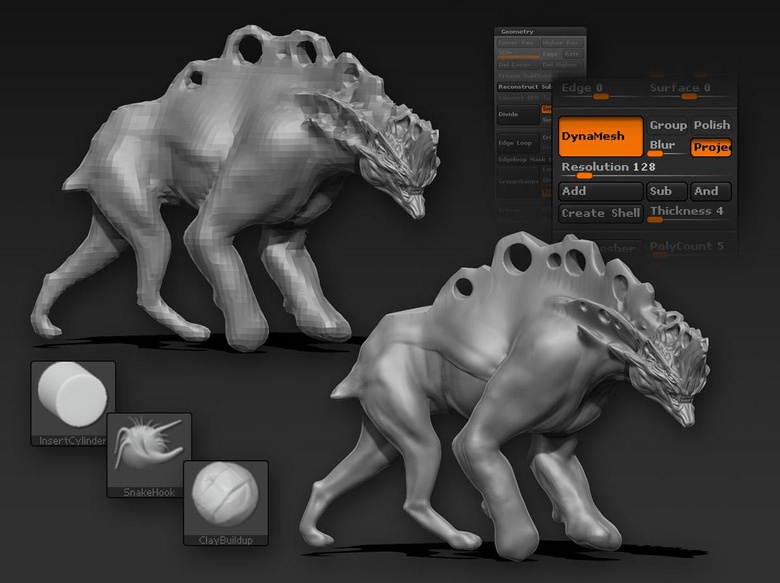 I've now started adding more detail to the body. I'm still leaving the head as it is, since I don't really want to add any more detail at this point. I may have already added too much, considering I'm still not sure which direction it is heading.
I continue to work on the body, using the Polish brush more heavily now, to create harder edges and combining the organic feel with the Clay Buildup brush.

When adding the muscles I start to see the model as a whole and it gives me doubts about whether I'm actually going in the right direction. It's definitely alien, but is it really an alien cat or an alien something else (Fig.04)? 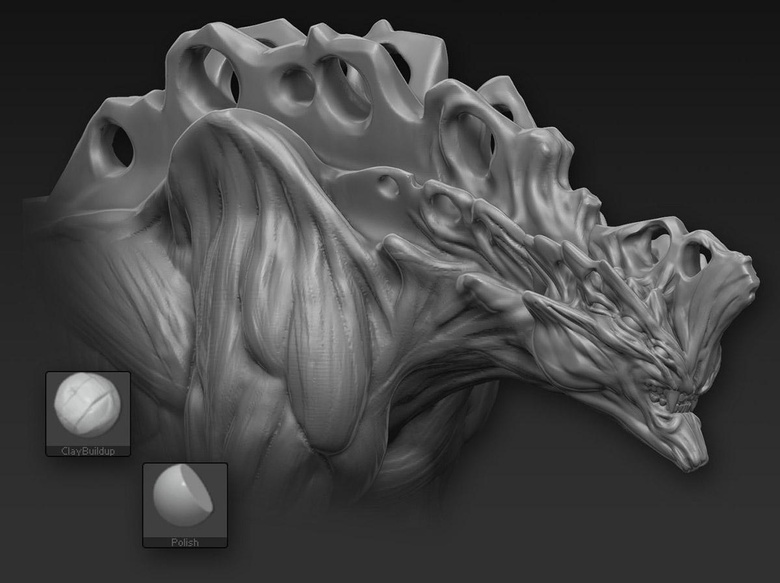 So I decide to remove most of the features on the body, because it's started to feel more like an alien dinosaur than an alien cat. I know that I will be adding fur later on, but that doesn't mean it will look any more cat-like. So I go back a couple of steps and start to look at the overall features again, but I still keep the head. I use the Transpose tool to work more on the rotation of the body. Now it feels more like a cat/panther, but the head is a bit out of place, as I've removed all of the hard-skeleton features on the body, using the ClipCurve brush. So I take off the head and replace it with one of the previous ones I've made.

To get the armor on the back, I simply take the head, duplicate it, use the ClipCurve brush quite extensively on it and finalize it with DynaMesh and the ClayPolish feature, to enhance the harder edges a bit. This keeps the feel of the head armor flowing to the armor on the body, with a few alterations, of course (Fig.05). 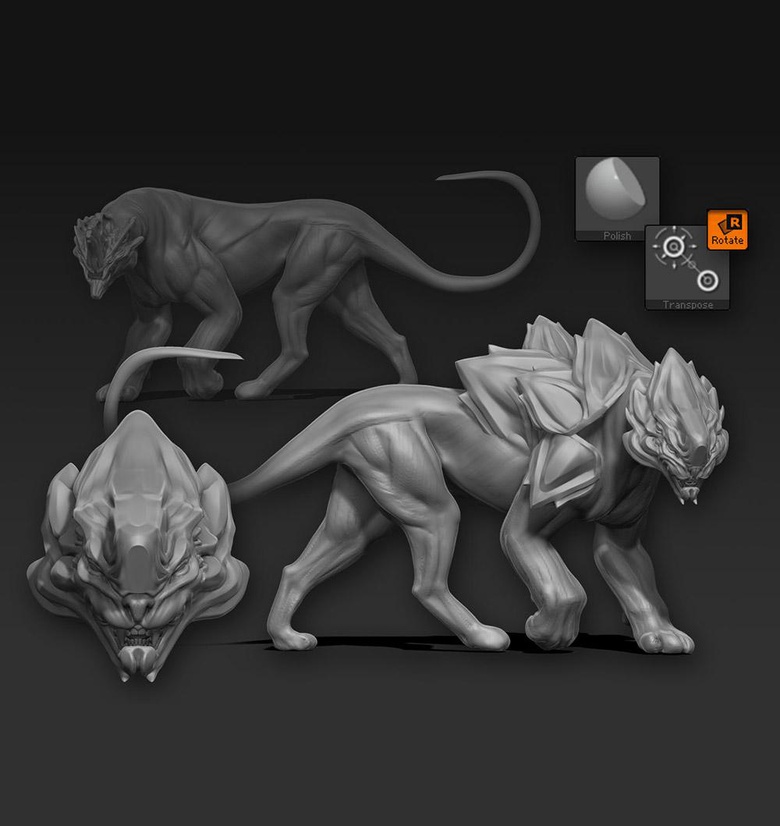 After duplicating the body armor pieces a couple of times and moving it around on the body, I'm starting to feel more satisfied with the shape. At this point I'm starting to think more about what the final image will look like, so I tilt the head up a little to make the creature look a bit more aggressive and present. I also start having fun with the tail using the SnakeHook brush, trying to get a long, swirly and interesting shape (Fig.06). 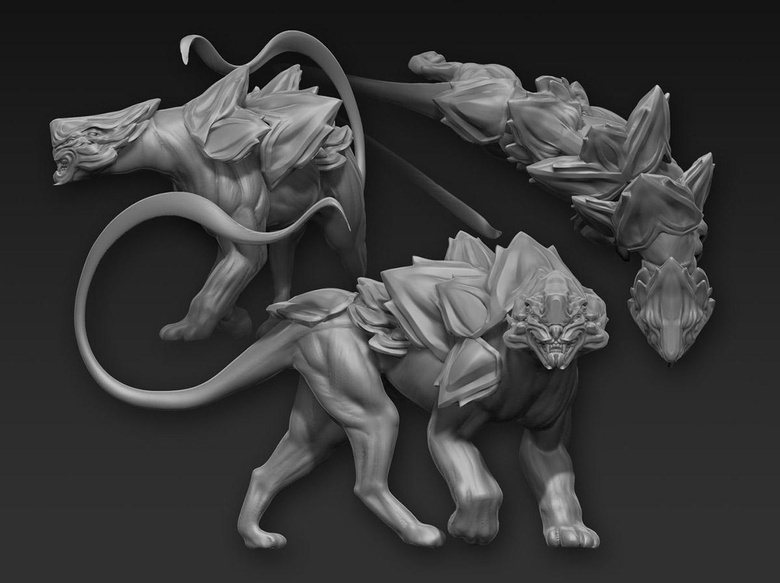 Since this is a cat-like animal, it needs fur. Of course, there are cats that don't have fur and maybe I can make a concept like that too, but for this tutorial I want to make it a bit more obvious that it is a cat-like animal over anything else. Also, this will give me the opportunity to have some fun and try out ZBrush's FiberMesh feature that came with the R2b update.

I will not go into any real detail to what settings I'm using in FiberMesh, but like most things in ZBrush, FiberMesh uses the scale and polygon density of the model, so your settings might change from model to model. Basically what I do is focus, once again, on the overall shape of the fur and not every single little detail, since that can easily be changed with a few simple brush strokes on the final image. This gives me the option to use the ZBrush fur (which can be exported as proper geometry) in the final image or simply use it as a reference (Fig.07). 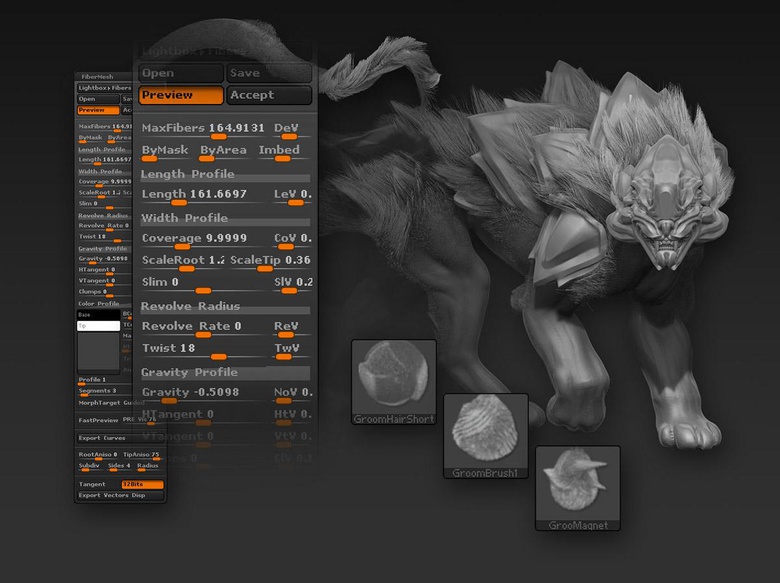 Alright, so now with the model done, I want to start looking more into the composition and look of the final image. For that I usually use modo because of the extremely simple realtime rendering and pre-made materials. I know a lot of people who use ZBrush, V-Ray, Maya or KeyShot for this. As I wrote at the beginning of this tutorial, what I'm trying to do is to create a concept, not to show off how good I am at tweaking material sliders or sculpting wrinkles that will never be visible anyway (unless, that is specifically what I'm aiming to show).

I import the model into modo and start moving it around, along with a camera and other models, to find an interesting composition (Fig.08). 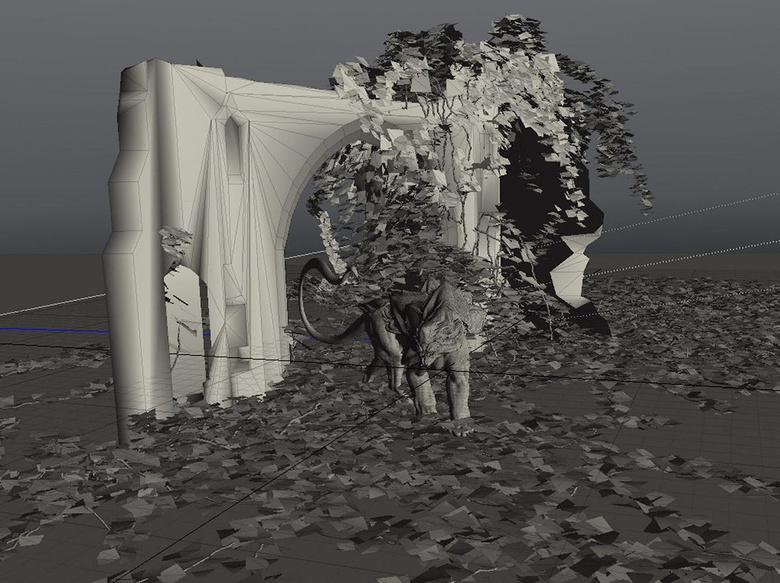 When I finally have the composition that I'm most pleased with, I start adding materials to the different models and also start creating a render layer. They will help me separate the materials, and add depth, mask, etc., when compositing it later on in Photoshop (Fig.09). 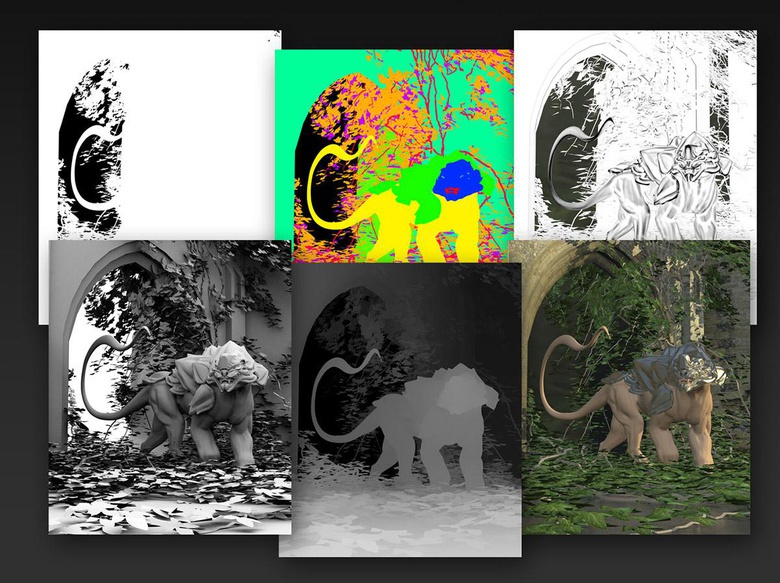 So this is what the final image looks like, after having worked on it in Photoshop (Fig.10). 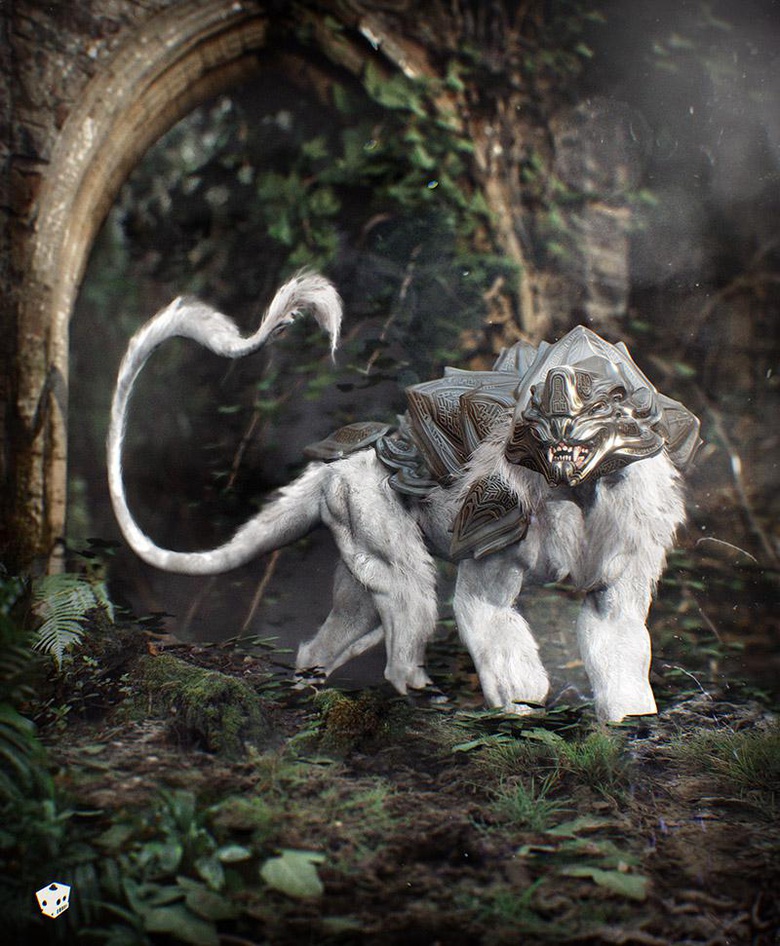 What you need to keep in mind when doing a concept for a client or for your own personal portfolio, is time and what is it that you really want to show. You could spend weeks on completing a concept (this might be fine on rare occasions); I prefer to spend a maximum of 1-2 days on a concept, like this one. So the reason I didn't start painting textures in ZBrush, was because I was creating a concept image, not a turntable or animation, just an image.

By doing this I can spend more time working on an overall rough shape and do the really intricate detailing in 2D instead of 3D, but still be able to use the lighting, shadows and some colors from the 3D models. This makes it easier for me to change something, in cases where the client wants something a different color, the skin to have a different type of texture etc.

If I take this image I just made for example, the client might feel that it's too detailed and too final for him/her to give any feedback on. Therefore it's very important to spend the right amount of time on the right type of image. I'd rather create 4-5 images in a week that give the client a lot of options, like the different types of heads I did, than spend a week or two on an image that might be dismissed in 10 seconds and then not have anything more to show.