3D sculpting a pair of fantasy characters in ZBrush

Felipe Fontoura uses ZBrush and 3ds Max to sculpt a fantasy elf and satyr sharing the same rocky base, based on a Uriah Voth concept…

In this tutorial, I will show some of the processes used to sculpt my latest project Thor Lieutenant, based on a concept by Uriah Voth. I will give some tips, and show how I did some of the accessories and modeled the characters. 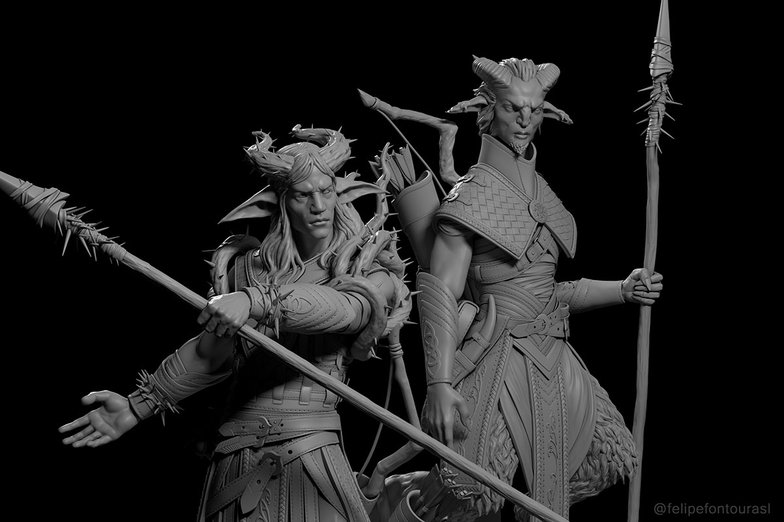 Before starting to block the character, it is important to find enough references that will help you to model the characters. Find the forms of anatomy, accessories, detailing, and works of other artists that inspire you. This way you have a target and get a broader idea of the ultimate goal. 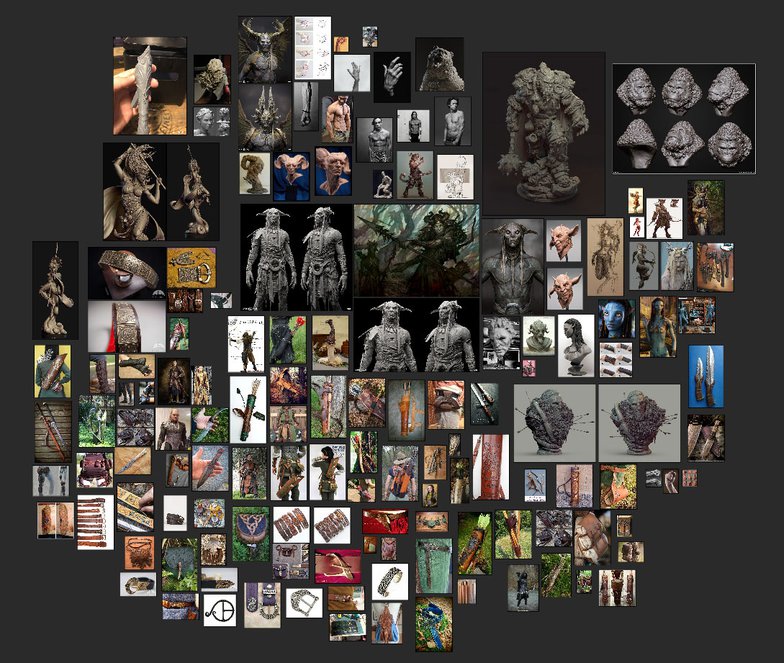 Some of my references 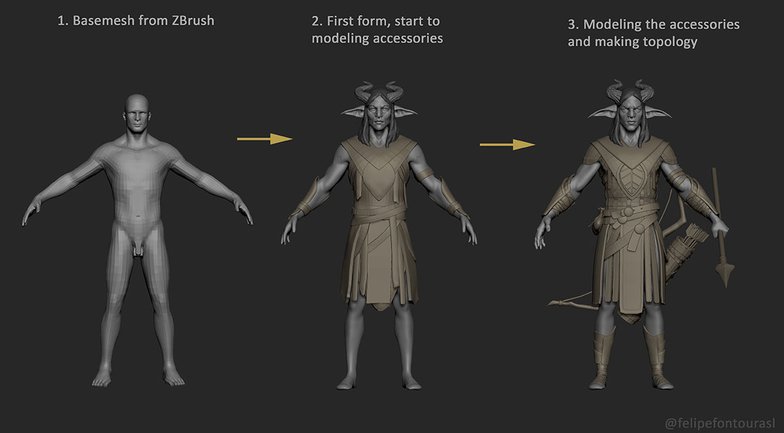 Starting to sculpt the second character

As the first one, I started the characters from a basemesh in ZBrush. When I started the second character, I tried to do it as a satyr, although in the concept it was not obvious what that would be, it was something that motivated me, because making a forest elf and a satyr are two types of creatures that I hadn’t done before and I wanted to model them. The idea was the same as the first; start to model the accessories without worrying about the functionality. 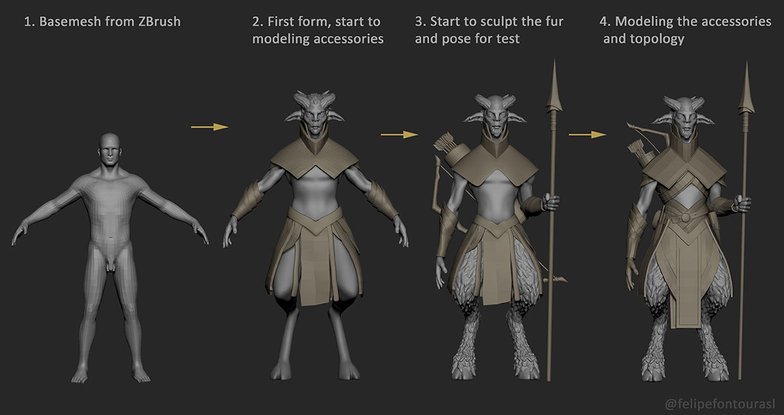 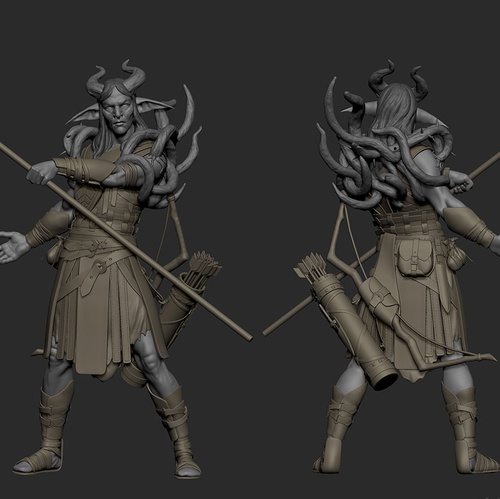 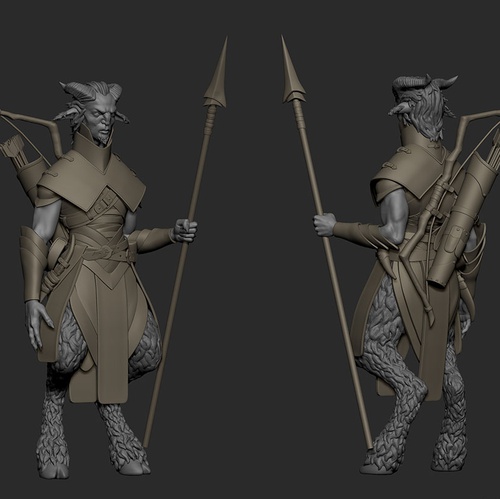 In the image below, I'll show you how I made some accessories. The leather areas ended up using an Alpha applied to the surface noise within ZBrush. You can access the NoiseMaker menu with  Tool > Surface > Noise. 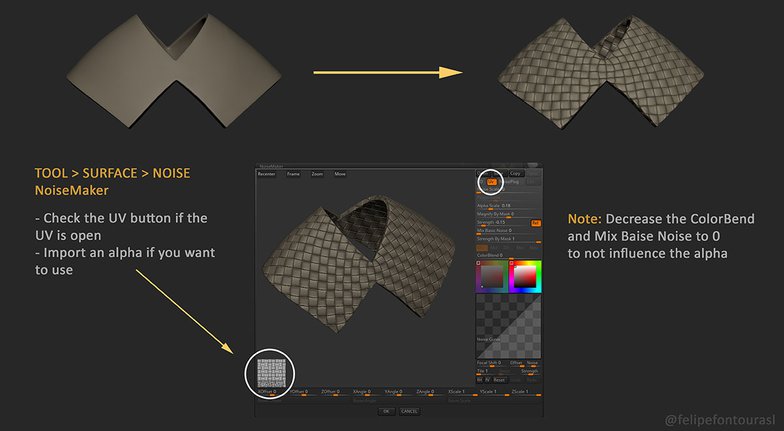 To not apply to the entire model, we can use Mask as Selection, leaving exposed only the areas that we want to show working with Alpha. 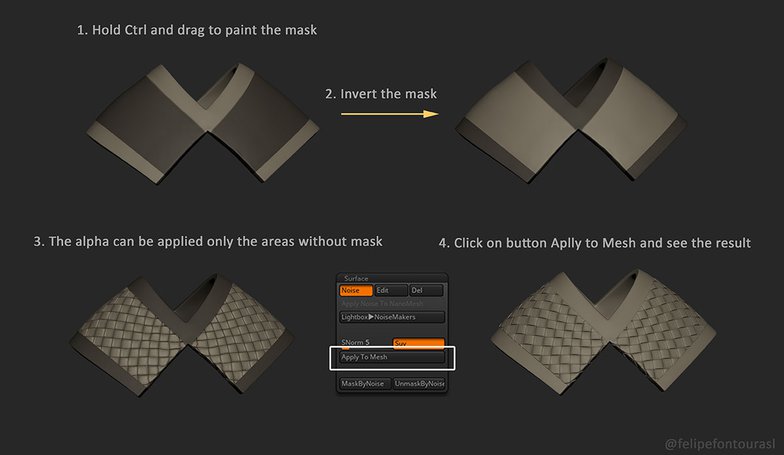 For sculpting hair and fur I used almost the same process. I usually use Claytubes and move the brush in a block, to leave in the shape I want before putting in the details. Then I refined further using Claytubes and subdivisions, Clay, Move, and Dam Standard. 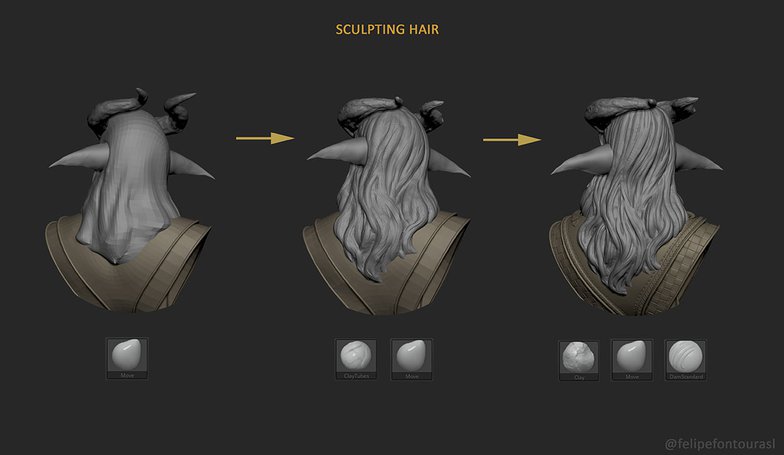 Sculpting hair for one of the characters

In the case of the fur, this time I used SnakeHook too, to help get the right shape. It works like the Move brush, but it can give a silhouette when moving and deforming the mesh a little more. 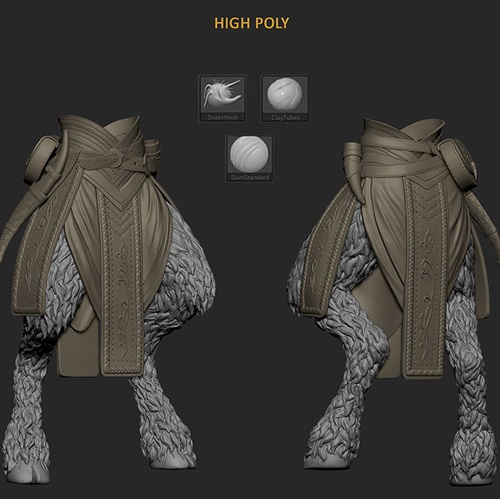 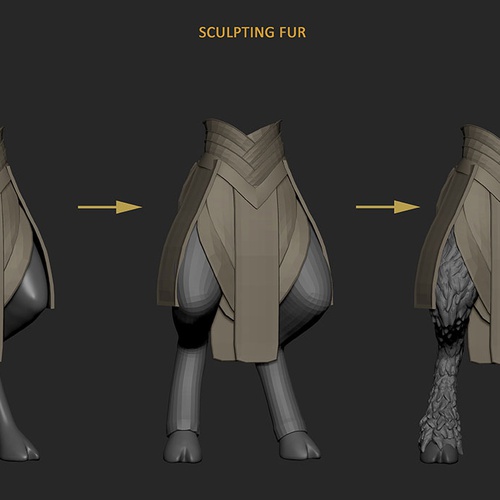 For those details at the edges of some accessories, I created this object in 3ds Max, duplicated it to interleave with each other. After importing to ZBrush, I applied the Insert Mesh, thus turning it into a brush. After that, I go to the Stroke menu and transform it to repeat itself, to get the result I want. It is important to mention that you can join the brush in CurveStep, decreasing the value, following the example. 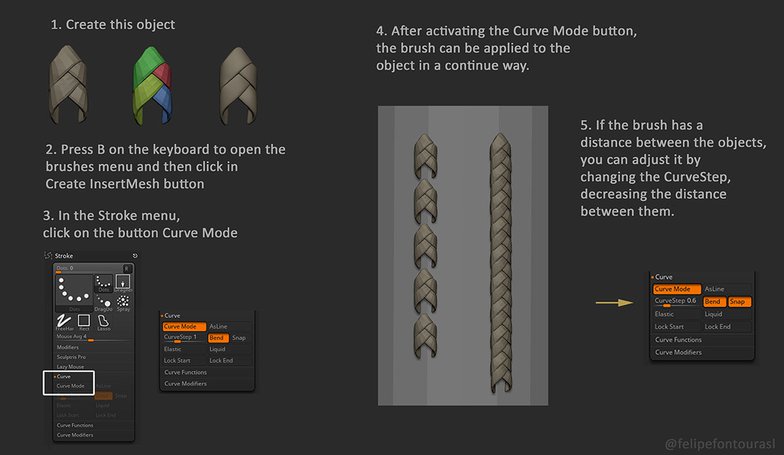 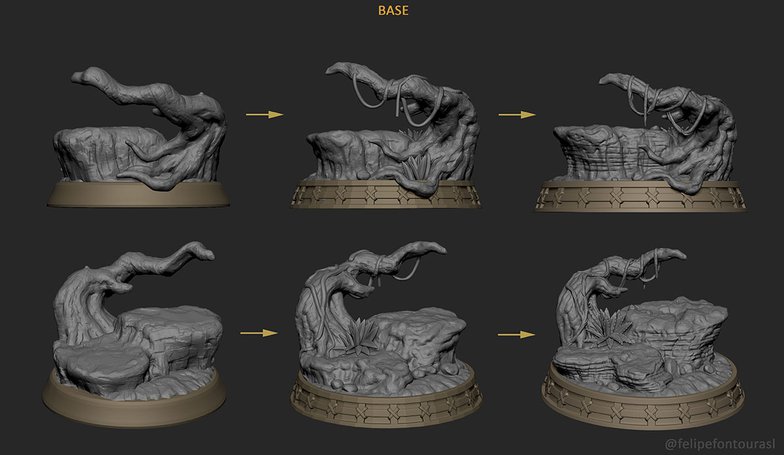 Sculpting the base for the two characters

To create the branches, I made them apart with the CurveTubes brush to get a cool shape and then joined with Dynamesh and applied ZRemesher afterwards. It can be done with ZSphere too, which would give a greater control, but with the curve it ended up becoming faster in this case. 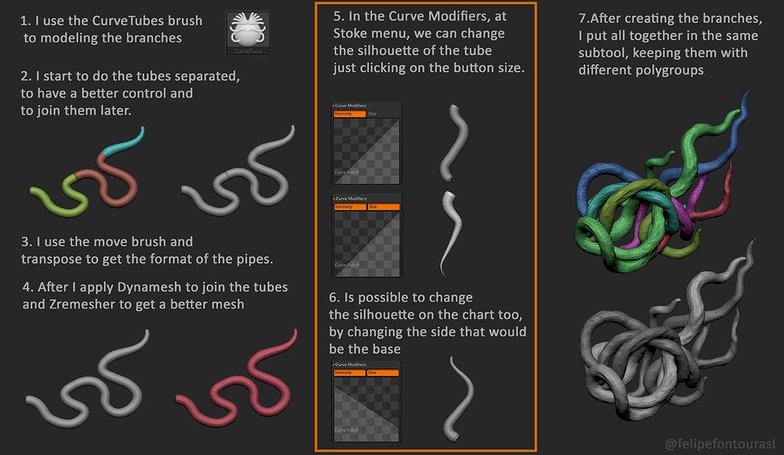 Creating the branches with the CurveTubes brush

The biggest challenge of this project was to try to leave the accessories functional, which although they are perfect in the concept, in 3D we need to adapt in some ways, to show all sides of the model, to imagine in a real situation how it would work with the movement of the character. Another challenge is the detailing the characters. I tried to insert a large amount of details, while keeping the accessories clean, instead of using noise on leathers. In this step I ended up changing the face of the elf, adjusting details, and changing the pose of the satyr slightly to adapt it better to the base, to look more natural. 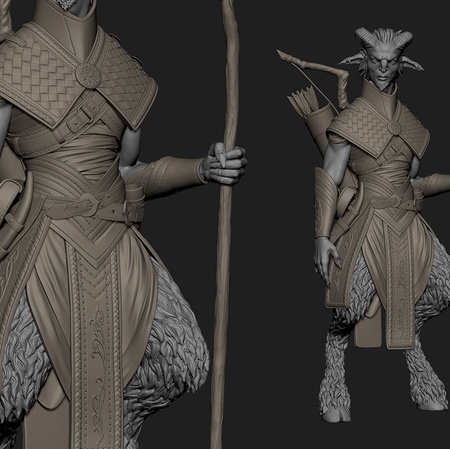 Detailing and changing the accessories 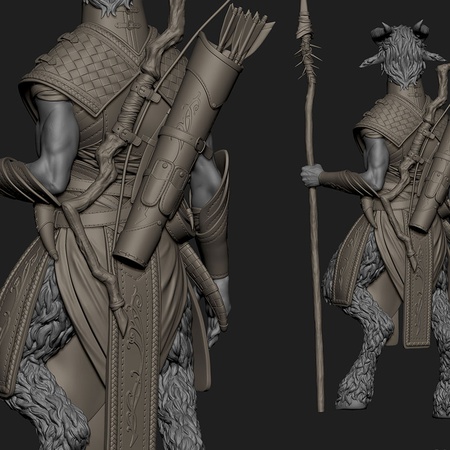 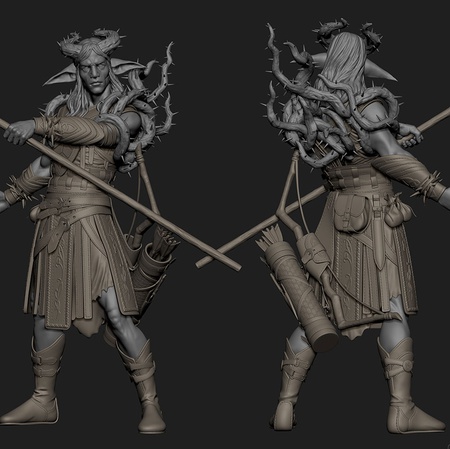 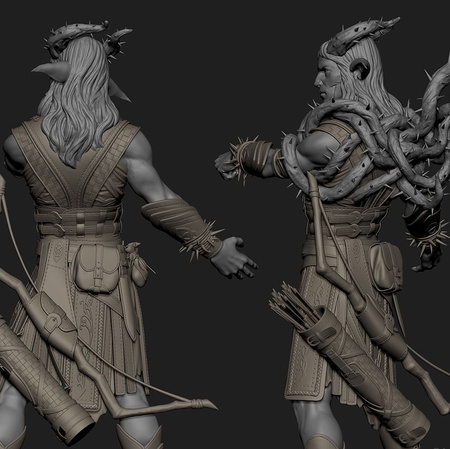 I sculpted the seams using a brush that worked perfectly; it had depth in the points of the seams. Whenever you apply we have to think about what it would look like if it were real, which stitches should have seams or not, depending on the accessory. 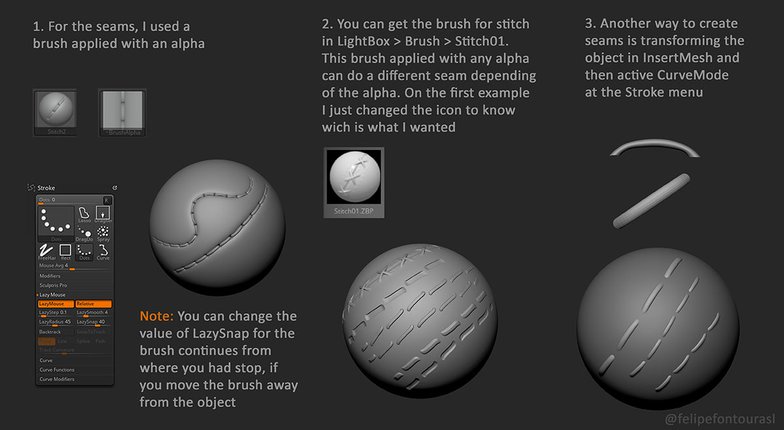 The end of the work is the most gratifying, being able to put everything together in the end that pleases you is what matters the most in a project, if you feel fulfilled by it. 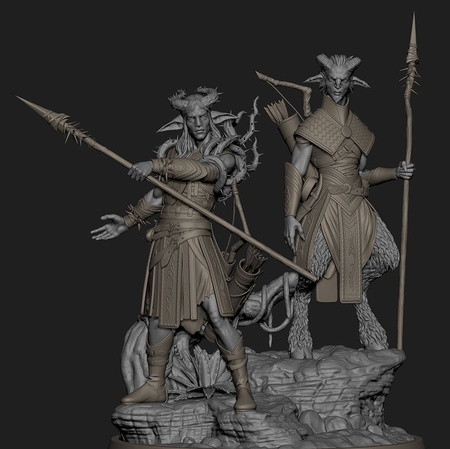 Final views of the project 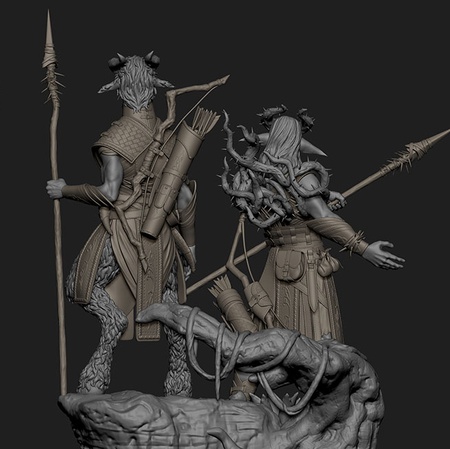 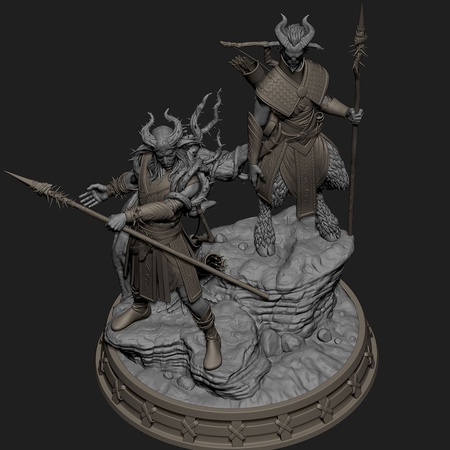 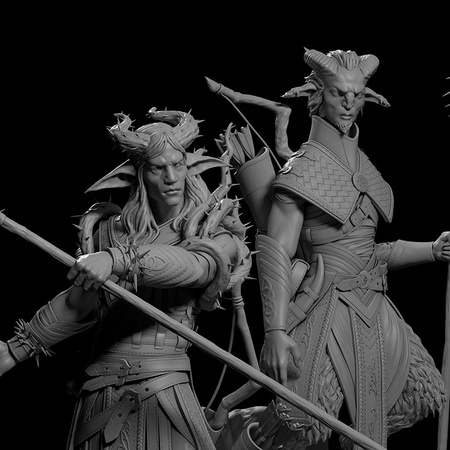 Creating a menu to model quickly

Another thing that helps me a lot in the blocking, and saves some time, is a menu that I created with the main buttons that I use to make the blocking of accessories or armor quickly, as the image below. 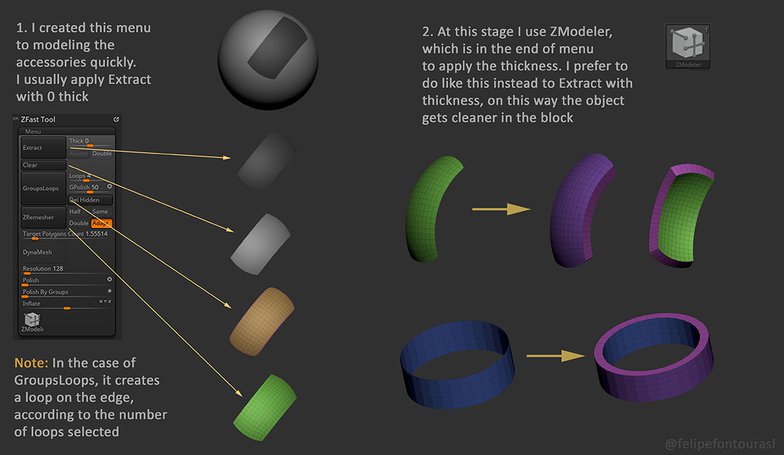 Customizing the interface to model quickly

One piece of advice I can mention and that works for me, is try not to linger on a specific part while modeling, and work slowly in general. I like to work this varied because when I return to the object or anatomy, I may have a different perception of what it was with some ideas to change it for the better. I think this helps not to get stuck at some stage of modeling, at least at the beginning.

Another important tip is trying to make the model join together before detailing, because when you start the details, the file will be heavy and need to be divided into parts. In this project I divided the file into five parts so that I could work quietly on the details without the risk of the file being broken. I divided the file into two parts for each character and one for the base. Turn off the morph target if you have used it, and the layers after achieving a result that you want – this weighs a lot in the file.

I would like to thank 3dtotal for the opportunity and I hope everyone likes the result of the tutorial. Thank you and see you soon!