Scan's 3XS GW-HT15 showcases the new AMD FirePro W9100, but it's a capable workstation in other areas as well. Our expert, James Morris, puts it to the test inour latest review

Scan's 3XS GW-HT15 showcases the new AMD FirePro W9100, but it's a capable workstation in other areas as well. Our expert, James Morris, puts it to the test in
our latest review

The 3D workstation used to be almost exclusively based around professional-class processors, primarily the Intel Xeon, although AMD's Opteron had a period of supremacy as well. But in the last couple of years, the durability of the Intel Core i5 and i7 has made them attractive choices, particularly for entry-level systems.

Now that Intel's top Core CPUs automatically ramp their frequencies when under load, many workstation manufacturers are permanently enhancing frequency to improve performance. Scan's 3XS GW-HT15 is a classic example of the genre. 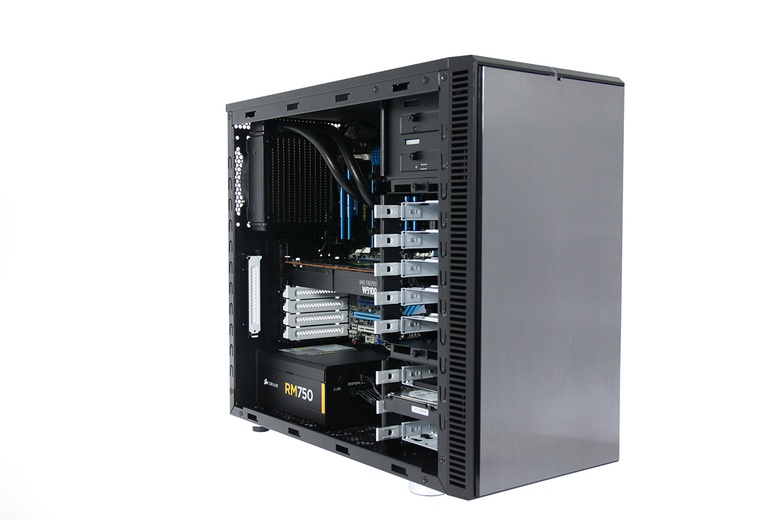 The 3XS GW-HT15 is based around an Intel Core i7 4930K processor, which nominally runs at 3.4GHz. But Scan has set the processor to run permanently at 4.4GHz, and installed a Corsair water-cooling system to keep any excess temperature under control.

This is a 6-core CPU with Hyper-Threading, too, so presents itself as 12 processing cores. Scan has partnered the Core i7 with 32GB of 2133MHz DDR3 SDRAM, supplied as 4 8GB modules. This leaves 4 DIMM slots free for upgrade to the Asus P9X79 motherboard's potential maximum of 64GB.

The star of the show, however, is the brand new Sapphire AMD FirePro W9100 graphics card, which we recently reviewed on its own. This sports a massive 2,816 Stream Processors, 37.5% more than its FirePro W9000 predecessor. It also boasts a huge 16GB allocation of GDDR5 frame buffer, which has a 512-bit bus and operates at 320GB per second. It's specifically aimed at the growing interest in 4K film production. 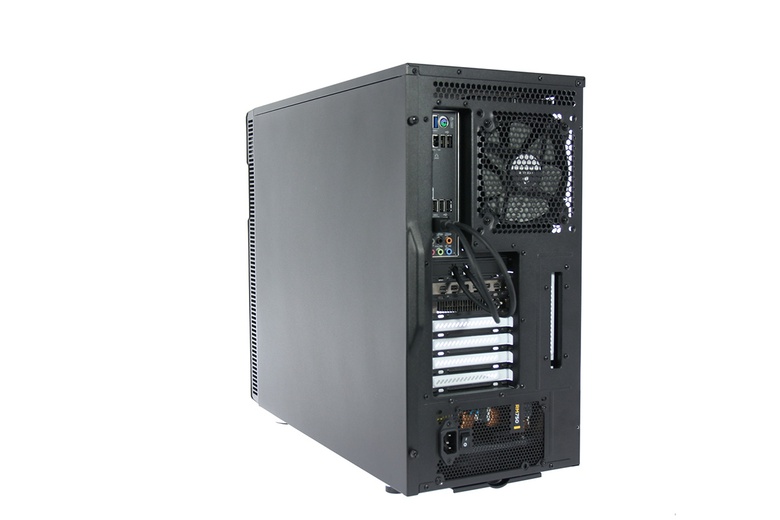 Power buttons, audio jacks and a pair each of USB 3.0 and USB 2.0 ports can be found conveniently on the top front edge

Storage is on par with the workstation norm. There's a decently sized 256GB SanDisk X210 SATA solid state drive for the operating system and applications, plus a 2TB Seagate Barracuda 7200.14 SATA conventional hard disk for mass storage of content.

So boot up and software loading times will be quick, but there's plenty of space available for media files. A 24x Samsung SH-224DB DVD rewriter and multi-format media reader are also supplied for comprehensive removable storage needs. 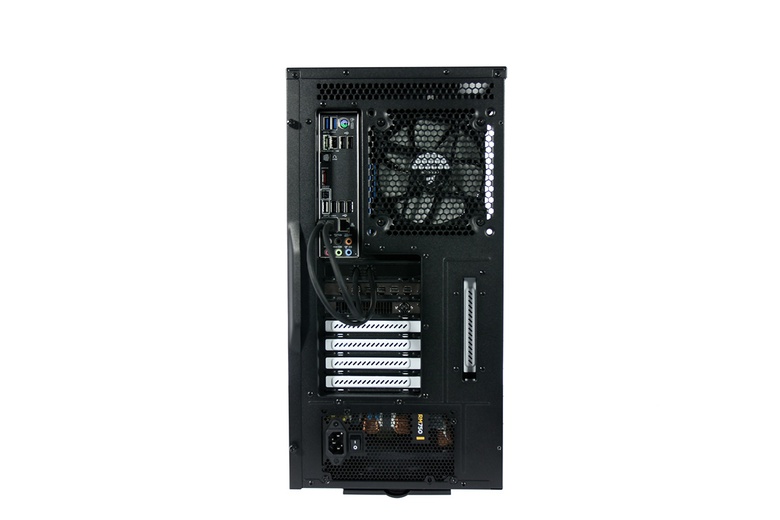 "It's the fastest single-socket system we have tested, and will give dual-socket workstations from a couple of years ago a real run for their money too"

This isn't as quick as a contemporary multi-socket Xeon-based workstation with more cores on offer, despite the clock speed. But it is very quick for a single-socket system. In fact, it's the fastest single-socket system we have tested, and will give dual-socket workstations from a couple of years ago a real run for their money too.

Thanks to the AMD FirePro W9100, graphics capabilities are naturally outstanding. The Scan achieved 104.88 in the OpenGL portion of Cinebench R11.5, and 143.38 with R15, both of which are the highest scores we have seen. 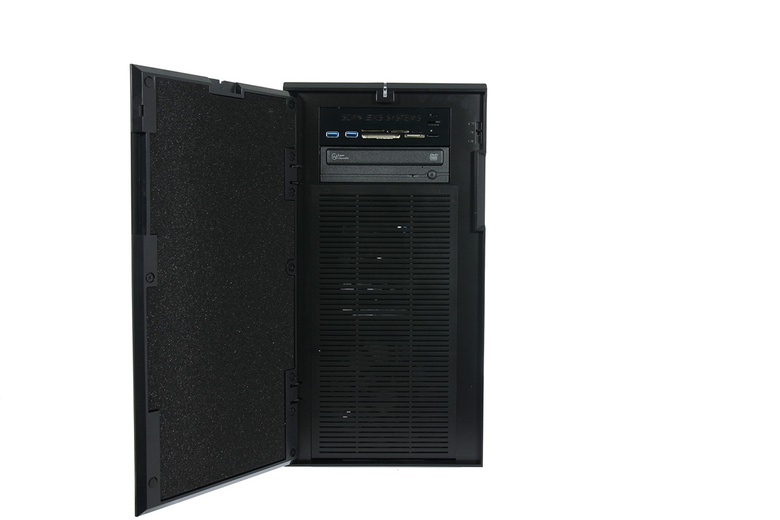 A multi-format memory card reader, with two extra USB 3.0 ports, and a DVD rewriter lurk beneath the front door

SPECviewperf 11 highlights include 83.31 in the lightwave-01 viewset and 92.49 in the maya-03 viewset, which are excellent results, although NVIDIA's Quadro K5000 has provided even better performance in the past. Conversely, the result of 76.67 with the sw-02 viewset, based on SolidWorks 2004 from Dassault Systemes, is the highest we have seen.

We also tested the 3XS with the recently released SPECviewperf 12, but have few comparisons, with the system beating all the currently published scores, although none were on comparable platforms. 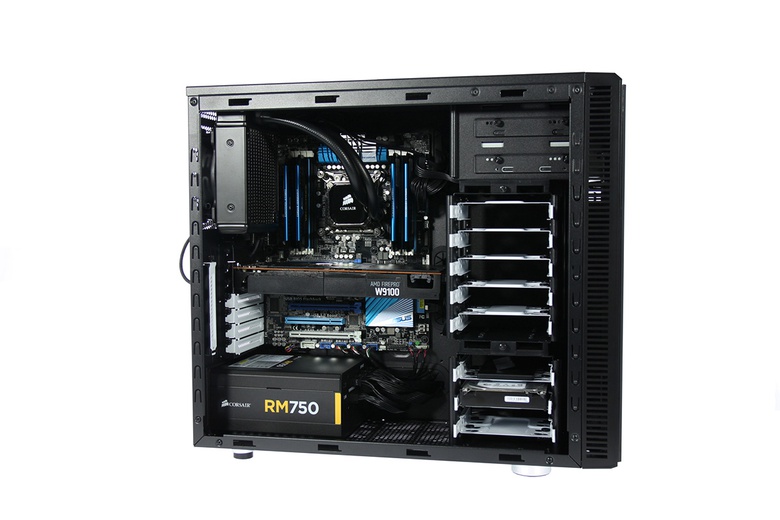 The Scan 3XS GW-HT15 is undoubtedly a powerful workstation, but its price pushes it into dual Xeon territory. With the latter, you are likely to get even better rendering capabilities, although the 3XS will still reign supreme when modeling, particularly when using large textures for 4K.

However, mitigating this, the AMD FirePro W9100 accounts for more than half of the cost, so a very reasonable and only slightly less powerful system could be had if lesser graphics were specified. Overall, this is still a very capable and well thought-out workstation.