No stranger to the Marvel Cinematic Universe is Scanline VFX Supervisor Bryan Grill who had to create Warrior Falls for "Black Panther"...

No stranger to the Marvel Cinematic Universe is Scanline VFX Supervisor Bryan Grill who had to create Warrior Falls for "Black Panther"... 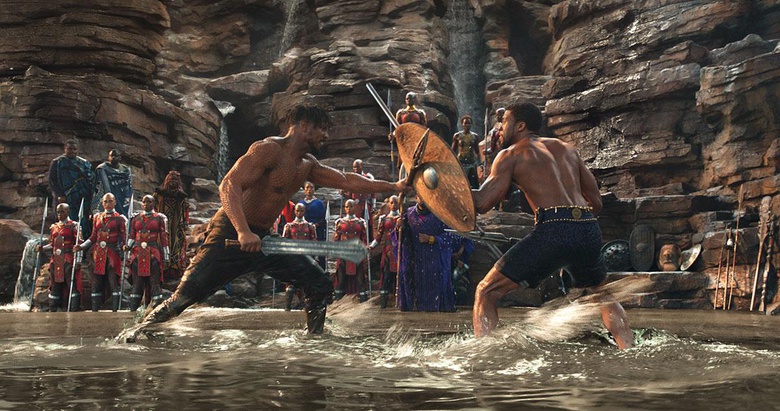 Black Panther marks the fourth time Scanline VFX Supervisor Bryan Grill has contributed to a Marvel Studios production, which previously led to him receiving an Oscar nomination for Captain America: Winter Soldier. "I've been fortunate with the Marvel movies that I have worked on because all of our tasks were helpful in the storytelling, with Black Panther being no different."

Logistical issues prevented shooting from taking place in Africa, so Atlanta locations surrounded by blue screen doubled for the high tech fictional nation of Wakanda, where civil unrest threatens the kingdom ruled by TChalla. We took previs of the environment, made 360-degree tiles, and using an app on the iPad and iPhone, set up a registration point. You could then move the iPad or iPhone around as if looking through a window into the environment. We used that simple tool early on to show cinematographer Rachel Morrison, and filmmaker Ryan Coogler, what would be out there in the blue.

Warrior Falls is a Wakandan landmark where coronations take place, as well as two significant hand-to-hand fights between TChalla and his challengers Erik Killmonger and MBaku. Reference material for the multiple waterfalls came from photography shot at Victoria Falls, and previous footage of Iguazu Falls captured for Captain America: Civil War, while the rock structure was inspired by Oribi Gorge. 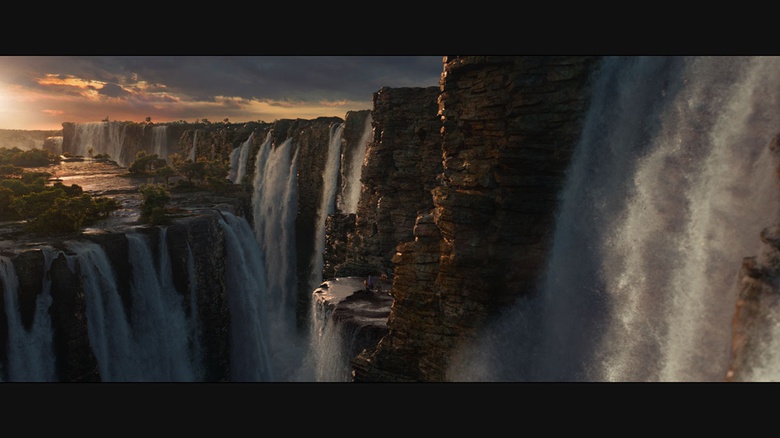 The design required a certain type of rock that would create these ledges so people could stand on and see everything, remarks Grill. Once we got the general model of our environment, the edge of the cliff where the water goes over needed to be created. If you have a piece of rock that is jutting out slightly, the water hits that, splashes, goes down and does its thing. We used everything that we could to get variation so it never felt like the same waterfall situated right next to each other. 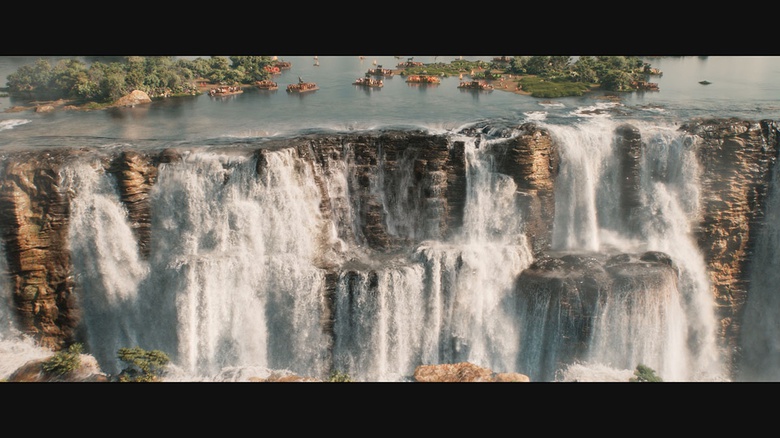 The Warrior Falls environment was divided into north, south, east and west. We could render 180-degree tiles looking at each direction, notes Grill. Then we would give that to our digital matte painting supervisor Yvonne Muinde who took real reference from Victoria Falls or Iguazu Falls to create these frames. If were looking in this direction, that is what you will see. We would show it to Ryan and thats how we would hone in on what Warrior Falls would look like. If we would just start simulating it, it would have taken forever. We use real concepts with photographic elements to set the tone. Once approved we would start simulating, rendering, and matching the concepts. Now we had moving waterfalls, interaction with the environment, and the lighting of the environment was that much better. We would get another round of notes. We started to refine our waterfalls based off of cameras and where we were looking at any given time. 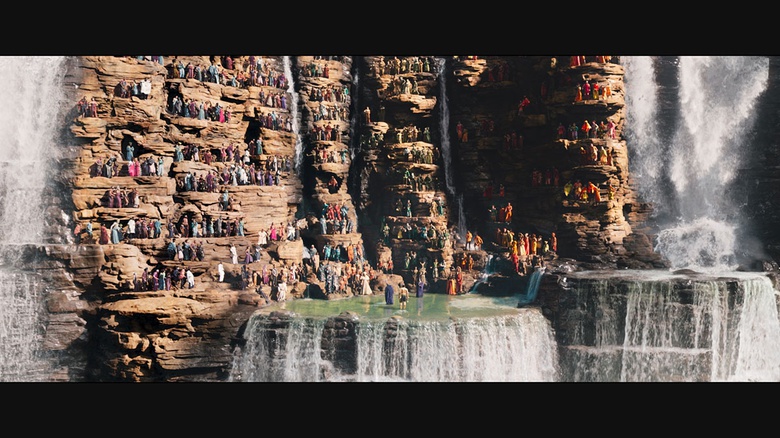 There were a couple of different tiers for digital face and limb replacements. You had Killmonger and TChalla fighting, the stunt actors for Killmonger and TChalla fighting, Killmonger stunt person fighting TChalla or two stunt people fighting for some of the wide shots, states Grill. Youre either doing face replacements, or in this case, a lot of color correction because the stunt double skin pigment was slightly different than the actors. 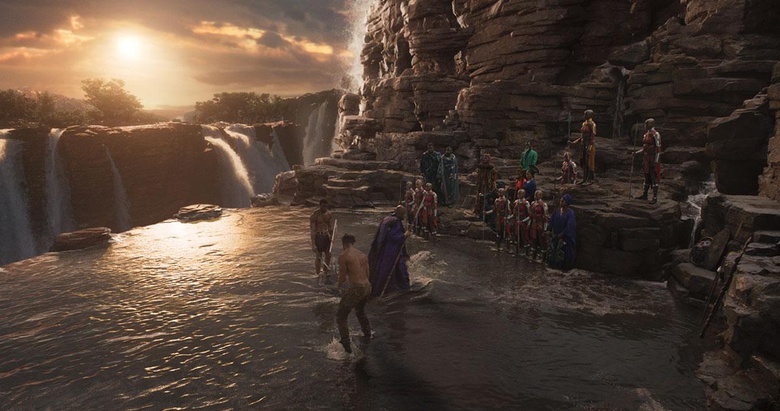 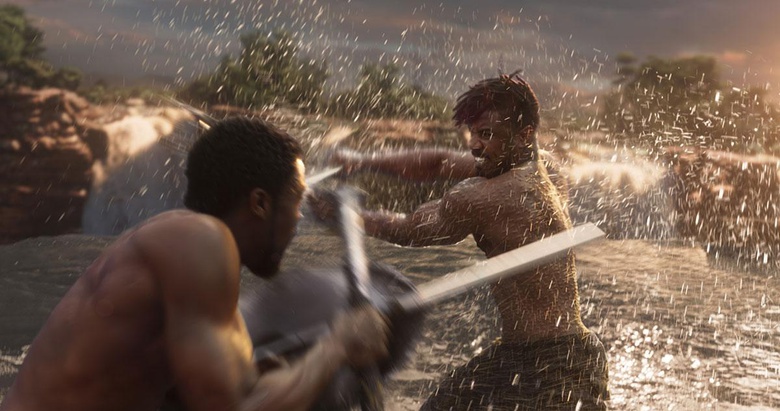 One of the big issues we had with face replacements was you cant just take the face of the actor and put it on the stunt person because their facial shape is different. Often we would have to remove the head of the stunt person, and then put the new head of the actor on because if you started placing the eyes or nose or part of the face, he would still not look like that person. We were lucky enough from a muscular body standpoint that the stunt doubles were the same with the actors. Reflections of the set lights and blue screens appeared in the water.

We inserted trees based upon what was living in that part of the world, states Grill. At first we werent adding movement to them because it was such a quick fight scene. However, we started to notice that there were parts prior to and after the fight scene where there was a lot of dialogue happening and that was when we said, It would be cool to see some movement in the trees. Then we started updating all of the work that we had done.Not only did the trees need movement but the Warrior Falls set needed to be dressed with waterfalls flowing into the pond. The whole underneath of the set became the water tank and the water could be heated and pumped up to the top of the set which was 30 feet high and the water would fall down into the pool below where the fights would take place,courtesy of Special Effects Dan Sudick. "To get the flow in the pond the way Ryan wanted the amount of water on the set would need to increase which than added unwanted mist and noise.This ment that at least 90 percent of the shots required CG augmentation. Ryan pictured the flow in the pool to be dangerous enough that you could be washed over the edge if not careful" 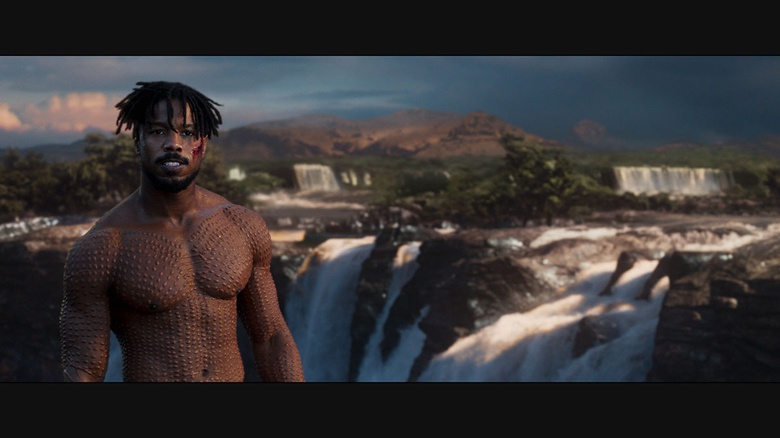 The fight sequences involving TChalla, Killmonger, and MBaku were shot over two weeks. You can imagine the different lighting scenarios, remarks Grill. Rachel Morrison tried to create her own lighting scenarios but we had some weather conditions in Atlanta where the wind picked up too much, we werent able to use the sun blockers because of safety concerns. Some of the scenes were shot with the available light as the sun would be moving during the day. However, as long as the foreground and background are tied to together (by the lighting) you have to roll with the fact that the sun is going to be changing. 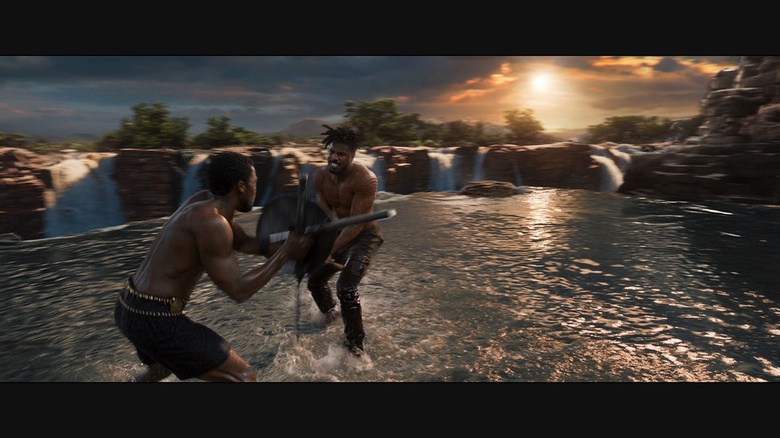 The fluid simulation proprietary software Flowline was given a series of upgrades during the course of the production by its creator, and Scanline President and Sr. VFX Supervisor, Stephan Trojansky. Because we get new challenges Stephan is always making adjustments to the code. Of the overall 385 shots, 290 had water simulations. Rendering is always heavy, especially, for the water simulations. Flowline is not only a tool that Stephan figured out how to create water, but also how to render it smartly by running simulations over multiple shots.

A lip tattoo made out of vibranium was important to filmmaker Ryan Coogler as it would identify the wearer as someone from Wakanda. There are not many African tribes or people around the world that have that tattoo on the inner side of the lip, notes Grill. The funny thing was once we got the final look Ryans process as a director was so meticulous that he wanted to change what was written on the tattoo (in Wakandan). The shots where the tattoos stood out were during the night, because you could read the vibranium. There was one shot where Killmonger shows Klaue his tattoo and we needed to figure out how the sun and daylight affected the tattoo so it looked real. We did a few different things to make it feel photographic. 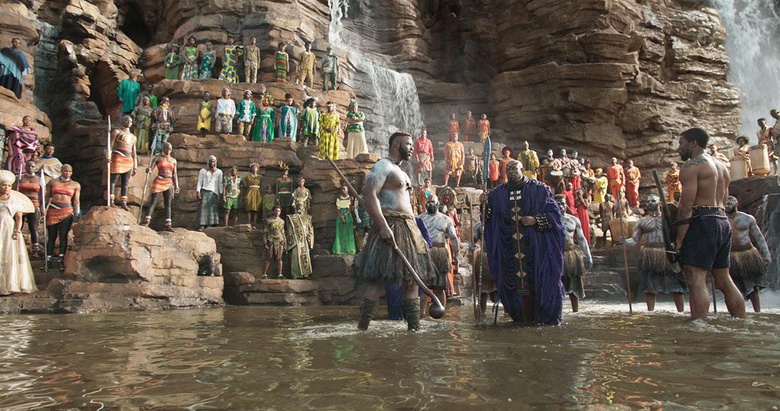 Vibranium technology is driven by sound, and examples were provided by Marvel Studios VFX Supervisor Geoffrey Baumann. Geoff had a whole bunch of reference that was precise in how the technology would work, especially for the Royal Talon, explains Grill. We had a couple of shots of the Royal Talon in our Warrior Falls sequences hovering over the water. Geoff put together a bunch of cymatics which is a method of using certain vibrations to create different shapes and movement designs on water, sand and substances. For one of the shots where TChalla is walking out of the Royal Talon you see the patternng on the water. I thought that was effective in showing something we hadnt seen before in the Marvel Cinematic Universe.

Like Bucky Barnes in Captain America: Civil War, arms dealer Ulysses Klaue has a robotic arm which was initially shot as a prosthetic. You start losing the pristine look (due to wear and tear) so end up either cleaning it up or replacing the arm all together. His arm never completely unfolded like it did in fights, so we had to put those slits in there and show energy being emitted when he breaks the glass display at the British museum with the vibranium hammer. Vibrations were added to the arm to help sell the visual effect as something that could be physically possible. Tracking the prosthetic arm so it could be replaced with a CG version was not complicated. 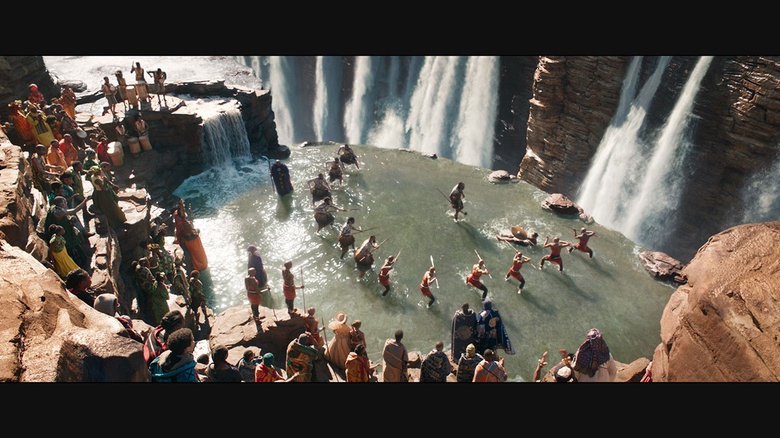 For the British museum scene we were just tracking one arm, but for Warrior Falls the whole body needed to be tracked and replaced. 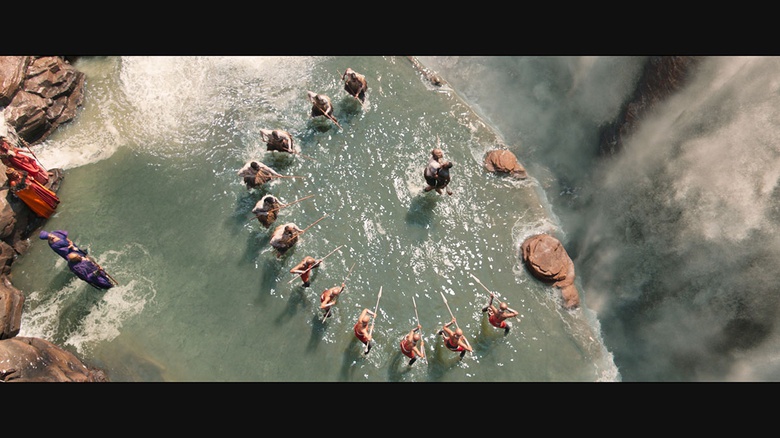 The challenge was being able to create an environment that Ryan and his team visualized and felt comfortable with, notes Grill. The sequences that we put together I just wanted to feel real. The beautiful background was there but the drama was in front of the camera. When TChalla gets thrown over into the river and you think that hes dead. Black Panther was a rare breed. Sometimes you get a movie where the writing or character development isnt great, and we do a lot of the visual effects. The comment I usually get is the story wasnt so great but the visual effects were awesome. But with this movie everything was awesome. Its satisfying and special. 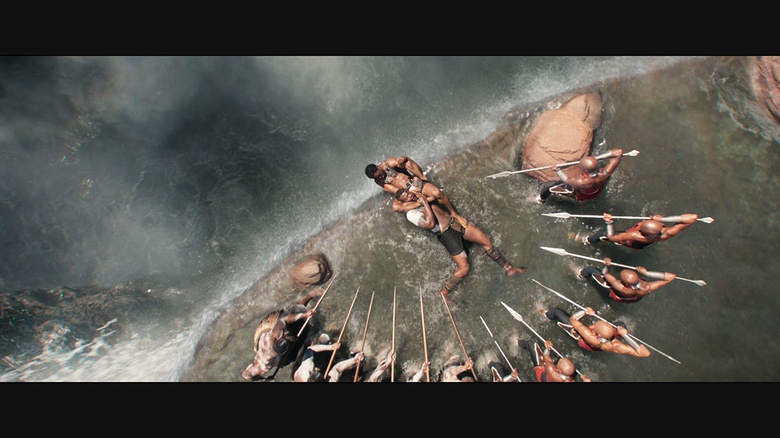