Asset & character artist for Platige Image, Piotr Kujko, shares the workflow and inspirations behind his Bob Marley portrait, and a whole host of inspirations sure to inspire!

Tell us a little bit about yourself: Who are you, what do you do, and where are you located?

Hi! To begin, thanks a lot for this interview. For me, 3dtotal is one of the most significant CG platforms on the internet. I have always had big hopes to be featured in this gallery; it’s such a pleasure to be awarded. My name is Piotr and I’m specialized in character creation, but because of the multitasking I’ve achieved during my story with 3D, I work as an asset and as a character artist in Platige Image, the best commercials and cinematics studio in Poland. I’ve been keen on 3D for six years, my first software I launched was ZBrush and this love still continues.

What was the workflow behind your latest gallery image? Where did the idea come from?

Since I was a kid, I’ve been listening to Jamaican music. My neighbor listened to reggae music all the time. I was friends with his kids, so in my early childhood I was surrounded by this genre. When I was growing up, I discovered a lot of Jamaican bands, but I used to listen to Bob Marley and The Wailers a lot. When I was older, during learning 3D graphics, I promised myself I would make his portrait as a tribute for one of the most important parts of my life (I have also tattooed my whole arm with a Jamaican music theme)!

Regarding the CG aspect, I’ve put enormous time and work to reach this level. I made clay sculptures before, mainly to practice my sculpting skills in ZBrush. I sculpted three artworks for my previous project – Slavic Beasts, but I’ve always wanted to make photorealistic characters. I started classes on CGMA’s learning platform, where Pete Zopii showed me some great tips and techniques. I had to plan everything, think about workflow and especially focus on the dreadlocks. I had some ideas at the beginning about how to make them and fortunately I wasn’t wrong.

The head model was created from a generic basemesh with correct topology in ZBrush and unwrapped on four UDIMs in Maya – which was my main pipeline software. I spent two to three weeks on resculpting Bob Marley’s face, adding and subtracting clay layers, tweaking proportions until I was happy with his likeness. Face textures were created in Mari, using TexturingXYZ photos of dark-skinned models with some additional hand-painted layers with veins, color correction areas, and so on. After preparing the head with SSS shaders in Arnold (Maya), I created the eyes and started with the haircut.

I prepared around fifty objects looking like dreadlocks, unwrapped them and painted color-variation textures. Ready models have been scattered by two-layered, individual XGen descriptions, first of which pulled curly hair inside and secondly pulled out from the inside, getting braided and rough results. I spent about one week achieving a satisfactory look.

The last object I had to prepare was his grey shirt. The base cloth was created using Marvelous Designer. I did the retopology and sculpted a high-poly version to get some detail using a displacement map. I created the studio lights setup with a main light, rim light and additional yellow light. The final render was touched in Lightroom, which is like a magic wand for me – it always gives life to my artworks. 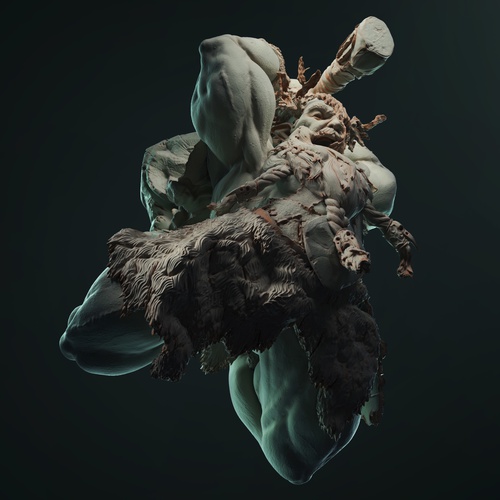 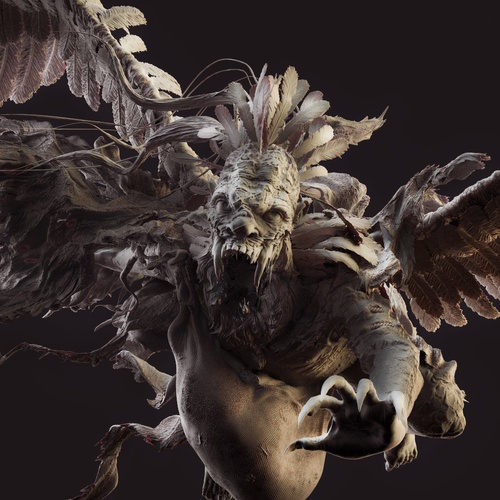 What challenges did the image present? Did you learn something new?

To be honest, everything was really challenging, but the most difficult part was creating Bob Marley’s face. I learned a lot of facial anatomy, understood how mimic muscles work and got familiar with the negro skull. I had some moments, when I thought I should give up, it’s too hard. I had a feeling, each tweak around his face made him worse than before. I spent more and more time on researching Marley’s photos in good quality, preferably in color, checking proportions using Photoshop guide lines, asking Pete for feedback. Finally, one day I looked at Bob and stated – I have it! After this moment I was sure, everything else, even the dreadlocks, would go smoothly. “Everything’s gonna be alright.” I’m so proud of myself; I boosted my skills and understood I can make really good art.

Do you use any other software, either for work or personal projects?

I mostly use ZBrush and Maya, both at work and at home. My first software was 3ds Max, and sometimes I run it, if Maya or ZBrush can’t handle something well. My primary texturing softwares are the Substance suite; I use Substance Painter a lot, sometimes I help myself using Substance Designer, or Alchemist, but in times when an access to a huge photoscan library is so easy, I prefer to buy texture packs, rather than make my own.

I decided to work on Mari in this project, because of the great UDIM cross-painting support and great export maps resolution, but otherwise I use Substance Painter every day. I also work with Marvelous Designer, but I’m not so specialized in it, so I mainly sew some basic cloth meshes and improve them in the other software. I prefer Arnold and V-Ray rendering engines; for organic, skin materials I’ll use Arnold, while V-Ray is for assets and environment scenes. As I mentioned, final tweaks I always make in Lightroom and Photoshop.

How do you keep your portfolio up-to-date? Any tips?

I work a lot. I spend my whole free time on 3D. I wake up earlier to work on my projects before my regular job. I also try to spend as much time as possible late at night, when my family goes to sleep. The same story is weekends. Until it makes me happy, satisfied and I still have great relations with my wife and little son, I think it’s a good addiction. Of course, it’s necessary to get inspiration in the meantime. I’m master of art, so I often view art in catalogs, on the internet, or in art museums. I’m always online on my Instagram, where I follow great artists, or profiles connected with art, pop culture, or music. It gives me a huge amount of ideas, which I collect on my smartphone. I still think that learning is a must, so I regularly sign up for a few courses, and watch tutorials or webinars. I try to surround myself and fill my time with 3D art and absorb it.

Are you a member of any social media groups? Any favorite hashtags you check on a daily basis?

I develop my Artstation profile, but I mainly use Instagram. I can show my artwork and share my private life with others. I think a lot of people try to imagine how the life of a CG artist looks, what his room looks like, what are his activities during the day and so on. Instagram is my generation space, I feel really comfortable with it and I’m really happy because of the many questions I receive, connected with 3D and my everyday life.

I focus on publishing chosen work-in-progress screenshots, final renders on my profile and share my life on Instastories, spending time at the computer, showing my job in the studio, showing some tips and tricks in 3D softwares. I have some hashtags I regularly use, but I think, the most often hashtag I use is #zbrush. Maybe I should think of something of my own. When I make something new, expect Instagram and Artstation publications. I always post it on a few Facebook groups like Pixologic ZBrush, Ten thousand hours, or 80 level: Show and Tell. I also send it to the 3dtotal gallery, hoping it will be picked.

What are your artistic ambitions?

At first, I want to be a famous 3D artist in the future. I have a problem with digital art, because I still can’t find its place. I think traditional art, like painting, or sculpting, will always be more valuable than digital, but now we live in digitalized reality. Computer graphics are seen more as craft, than as art, something used in Hollywood movies or triple-A games, which looks great, but probably don’t have this specific art factor. I really want to change it someday.

Secondly, I would like to work in the best studios around the globe. Our profession gives us an opportunity to make something big with the biggest artists. I wish I could work on the contracts with VFX studios in Europe, US, and Canada, or Australia. I dream of working for ILM, Pixar, Framestore, or Warner Bros Animation.

Who are your favorite artists, traditional or digital, and can you explain why?

My favorite traditional artist is Caravaggio. I am in love with his paintings and his sense of colors and contrasts. I love dark themes, so Rembrandt must be next. I really appreciate Polish traditional art; I admire Józef Brandt paintings and his amazing compositions and battle scenes, Jacek Malczewski and Aleksander Gierymski for their affection of human life, and Jan Matejko, the greatest Polish painter, for his devotion to Polish history.

I’m not sure why, but I prefer painters, than sculptors, even though I’m a sculptor myself, but if I had to choose, I would choose Bernini. Anyway, I think it’s better to focus on digital artists and my favorites are Ian Spriggs, Raf Grassetti, Hossein Diba, Zhelong Xu, and James W. Cain. Their characters are amazing. I love Cedric Peyravernay’s painting style and I wouldn’t be myself if I didn’t mention Polish arists: Piotr Jabłoński, Dariusz Zabrocki, and Jakub Różalski are the best. 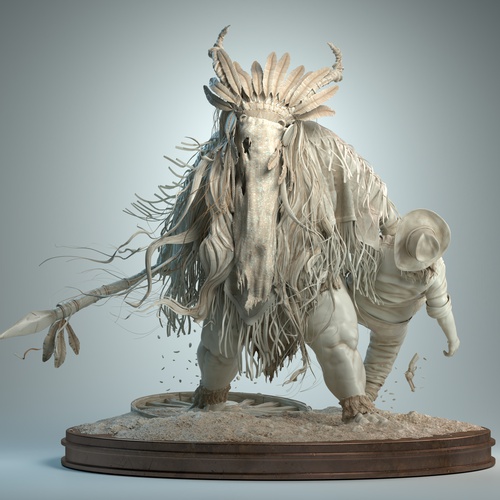 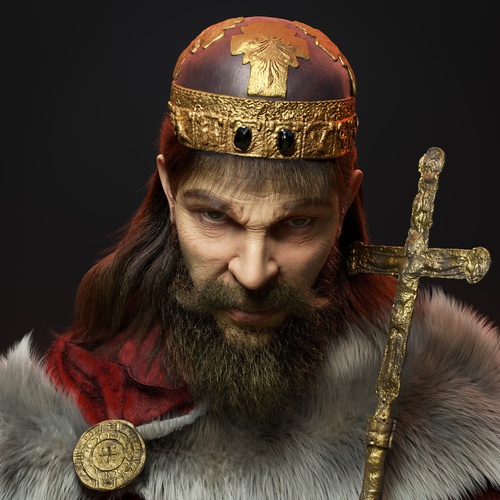 What can we expect to see from you next?

Lots of great content! I’m working on my next character, a photorealistic Werewolf. The fur will be really challenging. I will also start my next human character, but I won’t name him right now, you have to check my Instagram! I will post some WIP shots soon. Furthermore, I’m working on a few really good-looking projects at Platige Image. If I can share more info, or final artworks, I will let you know on my social media too.

This spring, I’m starting a secondary job, as a lecturer at a Polish college specializing in digital graphics. All the time, interest around my work is growing, which I’m so happy with, and I’m sure in the near future it will be more noise, new commercial and private projects. I hope you will follow my progress, support me, and give me some feedback. It means a lot for me, I want to share my knowledge with you, so stay in touch and have fun with our profession, CG is one of the best things that man invented.