Colorbleed is a fresh animation studio founded by the makers of the critically acclaimed short film, Mac 'n' Cheese. We chat to Gijs, Tom and Roy about the studio and ask them for advice!

Colorbleed is a fresh animation studio founded by the makers of the critically acclaimed short film, Mac 'n' Cheese. We chat to Gijs, Tom and Roy about the studio and ask them for advice! 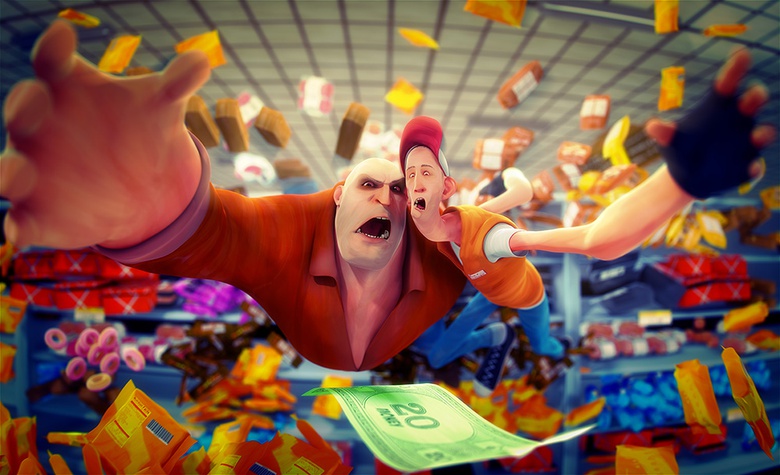 3dtotal: Thanks for taking the time to chat to us. Can you kick us off with an intro to the Colorbleed crew - how you all met and how the studio was born?

Roy Nieterau: We - Roy Nieterau, Tom Hankins and Gijs van Kooten - all know each other from our studies in 3D Computer Animation and Visual Effects at the Utrecht School of Arts. As classmates we learned what each others' skills were and we wanted to create a graduation project together - so we did! That's when we made Mac 'n' Cheese, which in turn kick-started our company with the hype that got created when it was released.

3dt: What's the aim of Colorbleed - what are your core values and motivations? Any particular goals for 2014?

Gijs van Kooten: We want to mostly focus on creating fun content. And have fun while doing it! We have been sort of lacking in this respect while getting our company running. Most time was spent on doing, dare I say it, dull commercial projects so we could buy our hardware, pay for licenses, and basically get the whole show on the road. This year we managed to churn out two short films - Mac 'n' Cheese 2 and the music video I'm Right Here - so we're going in the right direction!

This is not to say all commercial stuff we've done was dull - we just hope to get to a point where we can do more character-driven commercial jobs and give them more of our own twist. And of course figure out a way to produce our own short films in between... 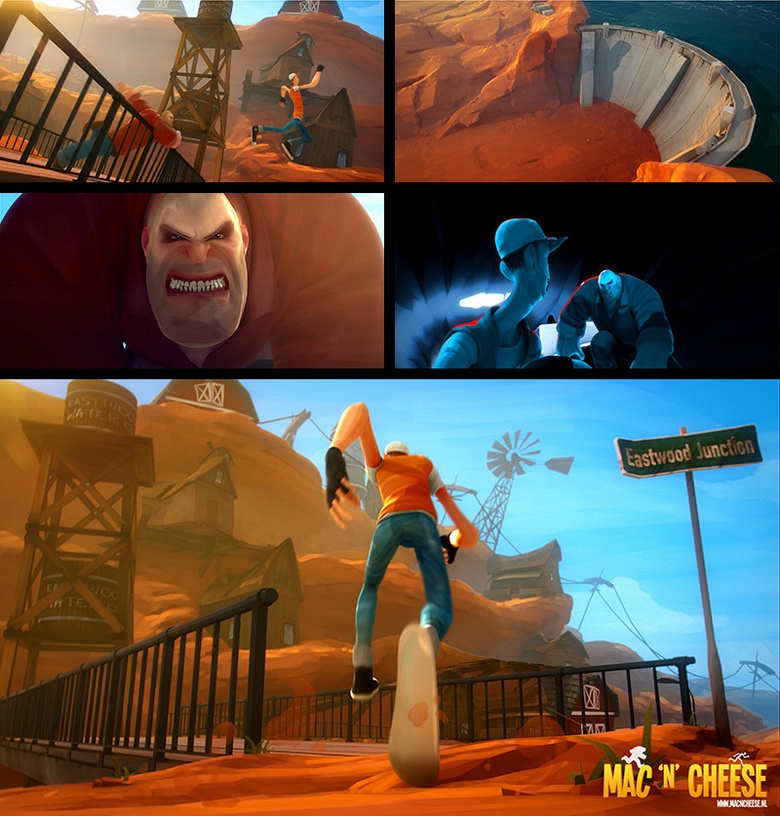 A short but thrilling ride that received over a million views in a month - at least half of the positive viewers' responses were beyond any of the team's expectations!

3dt: Can you tell us what you're working on at the moment and give us a quick walk through of your studio's pipeline for animation projects? What software do you use and do you create your own proprietary tools for specific tasks?

Roy Nieterau: We work with a variety of software packages, like Maya, ZBrush, Fusion and the Adobe Creative Suite. Since we're very focused on streamlining our workflow we've been creating our pipeline alongside using the tools. This started as small scripts to help with repetitive tasks to our current publishing/folder-structure system in the projects. Also transferring data from steps in production process is automated.

"We always have a drink at the end of a project. Gijs gets drunk!"

3dt: What is a typical day in the life of a Colorbleed crew member like?

Gijs van Kooten: Generally very little free time during projects! But that's probably the same for most studios? We start at 10 o'clock in the morning and work till about 6:30PM. Of course this doesn't hold up at crunch time. We don't have an official lunch break either. This is mostly due to the fact that we don't have a dining table yet!

In-between projects we spend our time at honing our personal skills (mostly related to 3D!) and doing small projects with our interns. We celebrate interns leaving, and we go out to animation festivals whenever we have the time to do so. Also, we always have a drink at the end of a project. Gijs gets drunk!

3dt: Can you share any advice on dealing with clients - what are the key things a freelancer/small studio should keep in mind when pitching to and working for a new client?

Roy Nieterau: This is a hard question. I think it's important to aim for the best quality for whatever project you do. At least that's what works for us, because that's what makes us happy. We're all in it to create new creative art and if we can put that passion into our commercial projects that is what really allows the project to pop out among other commercial projects. At the beginning it's hard to find the clients that are willing to trust your knowledge and creativity; I think that's because you're new on the market. Though don't be afraid to give your thoughts on a certain matter as long as you're helping the project with it. 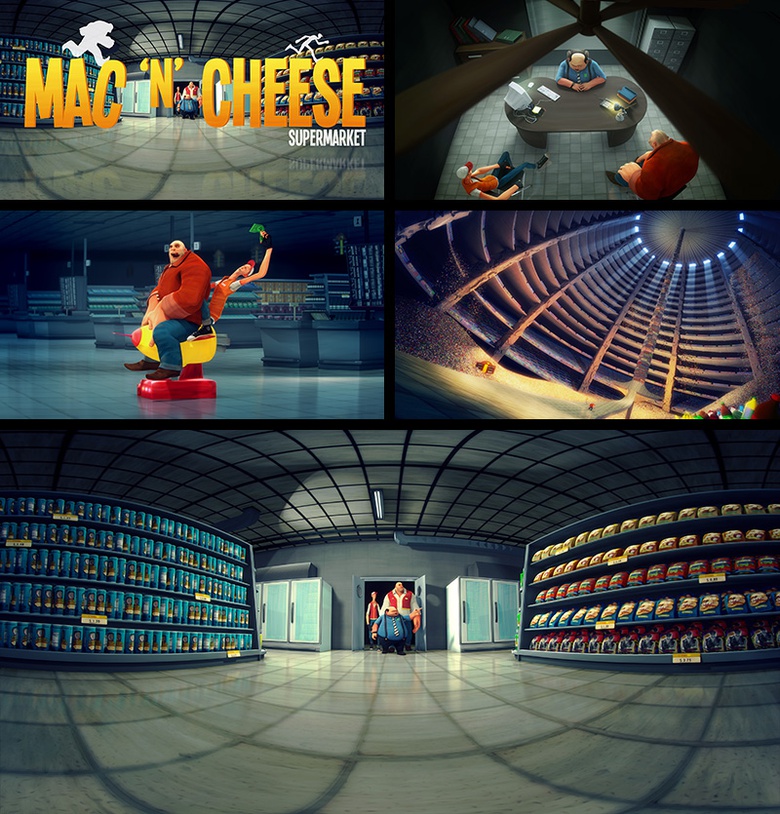 Mac 'n' Cheese Supermarket is the sequel to the award-winning Mac 'n' Cheese short film, which helped the team refine an up-to-date pipeline for the studio's future projects

3dt: Can you tell us about your award-winning animated characters, Mac and Cheese? How did the first animated short film come about and what were the key ingredients of its success, do you think?

Tom Hankins: Well, the idea to create something like Mac 'n' Cheese started a while back, about 4 years ago now. We just wanted to create something awesome - no story, no message. Just a short ride, to enjoy without too much thinking. Focusing on directing, editing and animation, in combination with the right lighting, composition and colors; the main goal was to give the audience the chance to have a little fun before returning to work or school, just for 2 minutes. The idea was to create an internet movie for a young crowd; we hoped it would go viral but didnt expect this much publicity.

3dt: And how about the sequel - what steps did you take to ensure the second instalment reflected the new capabilities of the Colorbleed team? What success has it seen so far?

Tom Hankins: Taking into account the lessons we had learned from the first production we were able to pull some stunts in our latest production. For instance, filling an entire 3D supermarket with thousands of products and deforming the entire environment to illustrate the mindboggling trip of our heroes. This required an enormous amount of research and testing, but eventually we were able to actually do it.

At first we mainly worked on creating a suitable pipeline - not just for Mac 'n' Cheese but for all our future productions. This streamlined the entire workflow to a point where our biggest concerns were about directing our shots and finishing animation and rendering everything in time. We now use the developed tools and pipeline for all our productions. This helps us maintain continuity and a clean workflow. 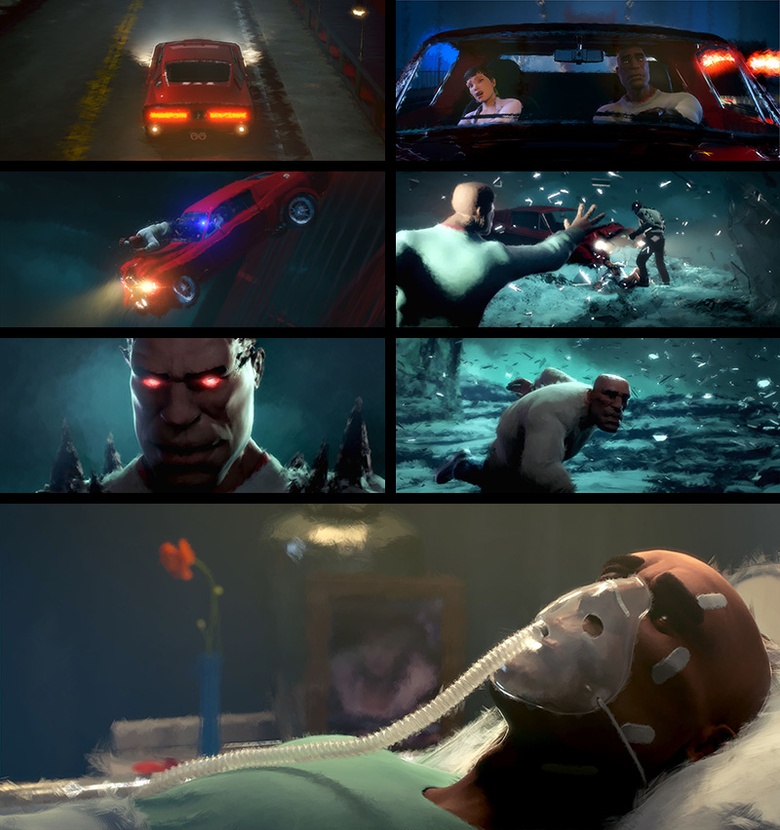 3dt: Do you have plans to make a third Mac n Cheese in the series?

Tom Hankins: To pay for all our software and hardware we have to do a lot of commercial work to survive but wed love to work on a full-length movie or another short film. We dont have the resources to pull that off at this point. Let's hope the near future will be kind to us again and that we get the chance to work on an independent film. I think we'll be focussing on developing some of our other ideas first before returning to Mac 'n' Cheese again, though.

3dt: Can you give us some advice for crafting loveable characters for animations?

Gijs van Kooten: We usually look up references of the direction we want to go in, then we just start working on the characters and go back and forth on what works and what doesn't. We give it our own twist, and when everyone agrees a character is finished, we call it quits and it goes into rigging!

3dt: What should we keep in mind when concepting new characters to tell a story?

Gijs van Kooten: Well, 'does it look good?' is high on the list, I guess. And since we're not that deep in design we don't consciously ponder the primary, secondary and tertiary shapes. I mean, we do heavily consider the readability of the silhouette, but that's about as deep as we go. We mostly look at the characters from the perspective of the final film: Will this fit the style? Will this work to tell the story? Can we rig this? Animate it? Could it express the range of emotions that we need? As such we handle the character designing process from a much more practical point of view. This process however becomes nothing more but a filter when we work with a third-party concept/character artist, though! 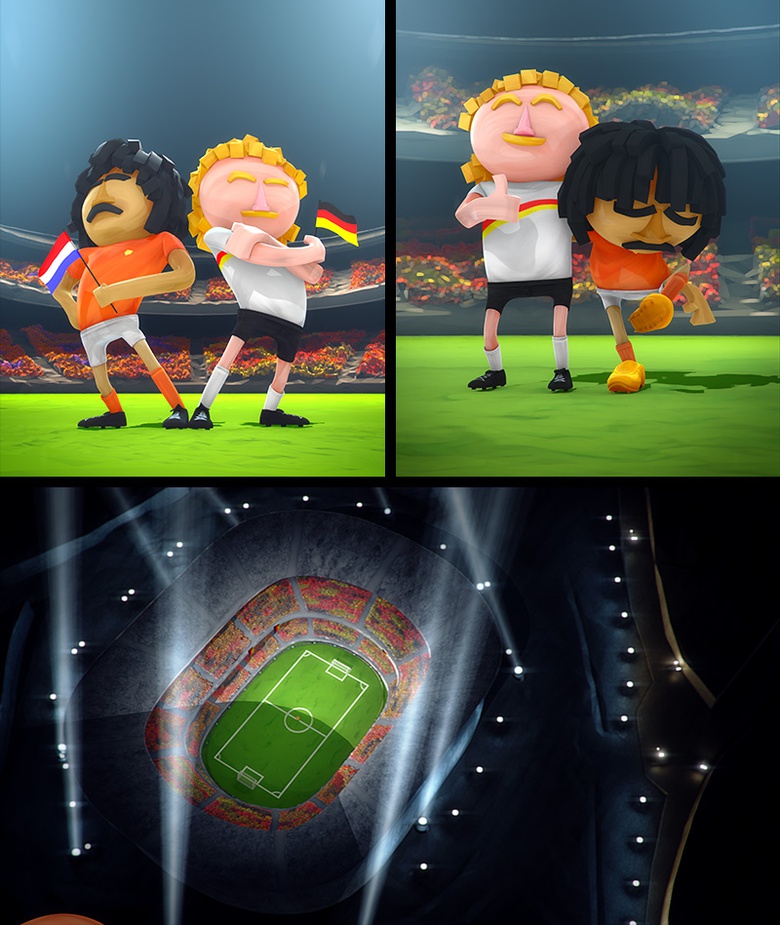 Volkswagen Netherlands and Volkswagen Germany teamed up for the European Championships, bringing fans to the online game Das Interland for Facebook, iOS and Android

3dt: Colorbleed sure lives up to its name when it comes to incredible colour palettes in its work! How do you establish such fantastic palettes? What have been the secrets of your success so far?

Tom Hankins: We usually start out by creating color keys and mood-boards based on other people's work we're inspired by. We don't have an in-house concept artist so we will jump into 3D quite early on in the process.

As the modeling and look-development start out we try to establish a proof of concept before we progress into finalizing our characters, environments, props etc. Some rendering techniques may require different topology, for instance. After we approve our concept we try to realize that style and work on maintaining it throughout production. These first images will function as a baseline for all the following steps.

3dt: The studio portrayed the subject of drugs in Mac n Cheese. How did you ensure the subject was handled carefully?

Gijs van Kooten: We made Mac 'n' Cheese with no regard of the audience's stance on the subject. Maybe it was because we were students, or just because we were Dutch (as so many people like to point out in the comments), but we don't consider drugs to be a sensitive subject. And it shouldn't be. It's a cartoon. We didn't mean to cause controversy or make a politically engaged film. Drugs was simply a good means to have an understandable visible contrast in the film. We neither condone, nor judge drug use, and we don't feel like either message is apparent in the Mac 'n' Cheese films.

"Trying to become and stay creative/innovative is extremely important. This includes staying educated , fooling around and working hard"

3dt: Since the first Mac n Cheese was put out there, what experiences have you learned as a studio? What have been your most successful client projects since?

Roy Nieterau: We were very lucky to get a kick-start with Mac 'n' Cheese into running our own business. We gained a lot of contacts from the popularity. As a starting studio that rushes into projects like we did it's hard to take some time off and evaluate what we've built and where we are in the industry.

Our most successful projects as a studio have so far been: Mac 'n' Cheese Supermarket, Mr. Probz - I'm right here, and Das Interland. The thing we've learned most is that trying to become and stay creative/innovative is extremely important. This includes staying educated (learning the latest techniques), fooling around (finding things that someone else might not have) and working hard.