Getting Symbiotic: The Third Floor talks about “Venom”

The Third Floor helped visualize the post- and previz for Marvel’s latest movie “Venom” working in collaboration with Ruben Fleischer and Paul Franklin. Find out more…

When it came to bringing Venom to the big screen, filmmaker Ruben Fleischer (Zomebieland) and visual effects supervisor Paul Franklin (Interstellar) recruited The Third Floor to provide previz and postviz, which were essential in executing the third act finale, as well as in mapping out the story. Comic book movies, in particular those taking place in the Marvel Universe, have become a staple for The Third Floor with Venom providing a unique challenge. “An interesting aspect was that the story features Symbiote characters that are able to adapt and change shape,” notes The Third Floor previz supervisor Javier Lopez-Duprey. “As such, you never really see Venom do the same thing twice. In visualizing scenes, we were constantly exploring different ways for a being like this to use its body as a weapon.” 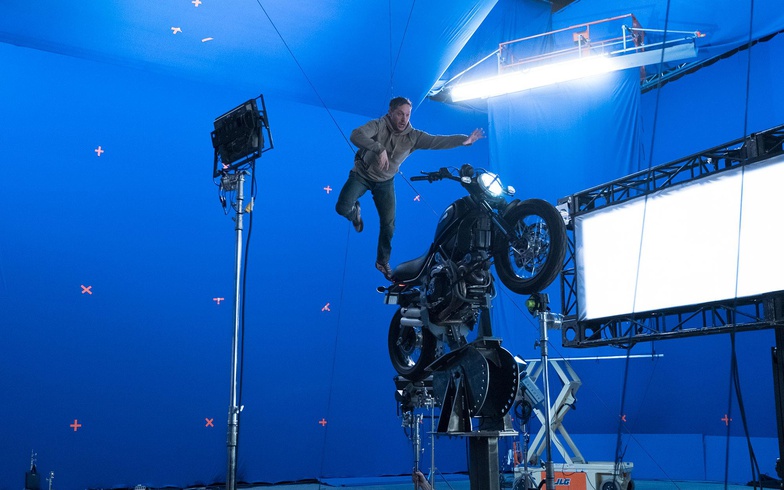 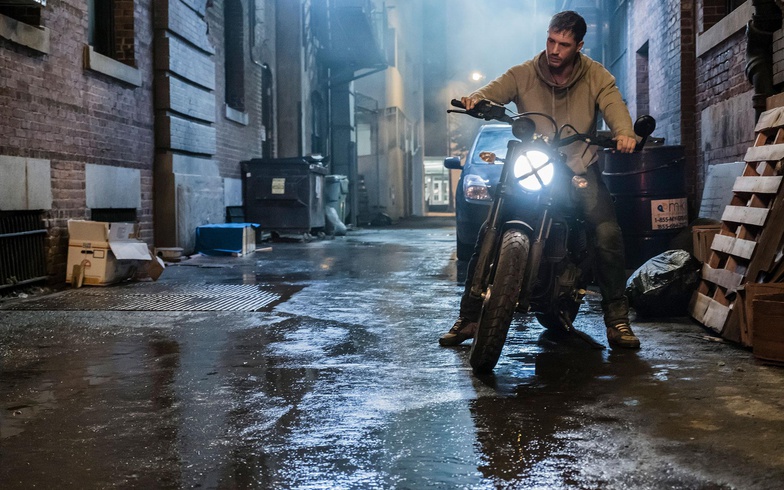 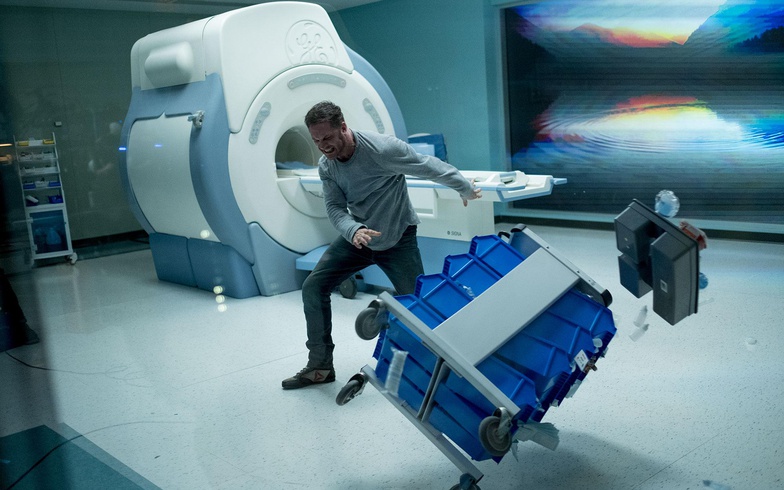 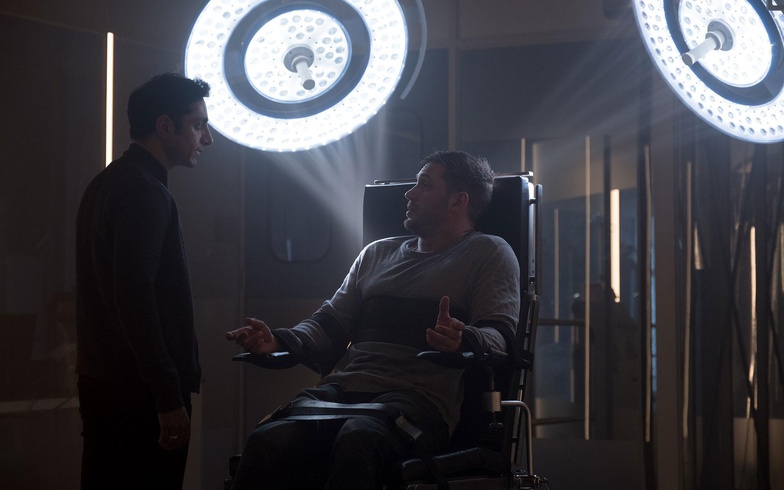 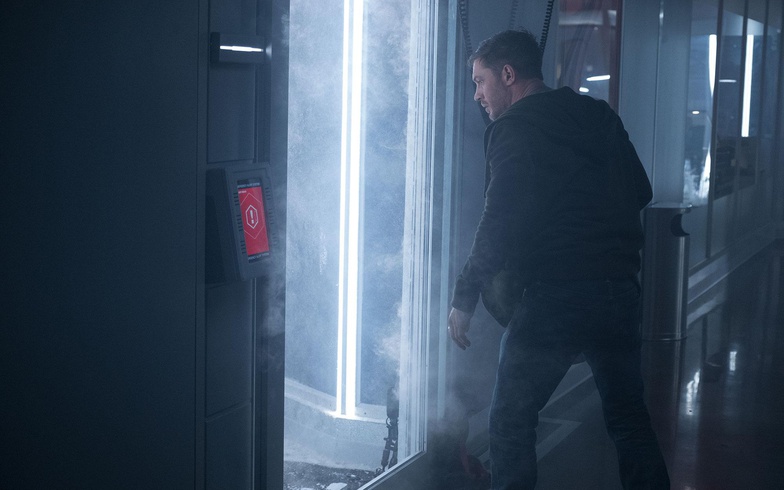 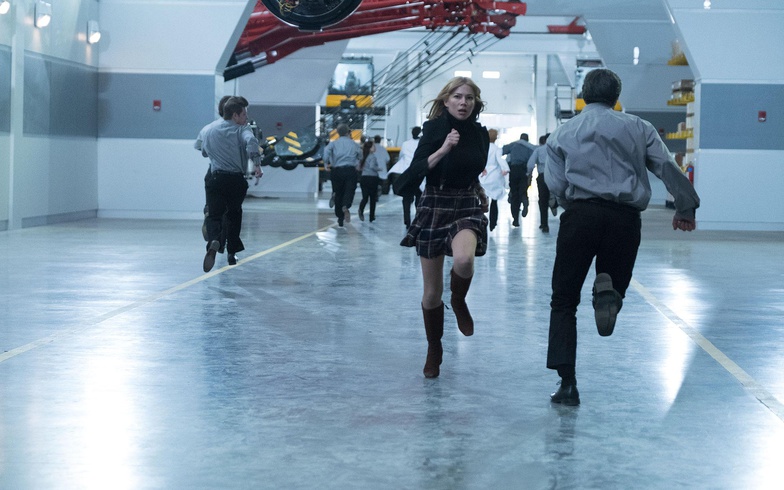 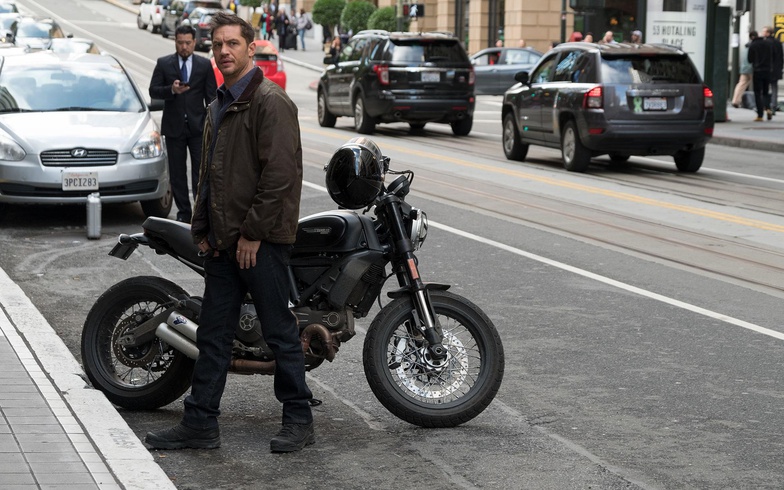 Rules and guidelines were provided by Paul Franklin, such as how powerful Venom could be and what type of movements he was able to perform. “We would have meetings brainstorming with the director, Ruben Fleischer, Paul, and with additional visual effects supervisor Sheena Duggal,” explains The Third Floor postviz supervisor Jourdan Biziou. “Knowing Ruben’s intentions for a sequence and the general shot count, Paul, Sheena, and I would discuss camera movements and compositions.”

“The previz team would visualize a section of shots and we would review that together, talking about what we liked and what could be tweaked or what new shots or combinations could be done to keep things dynamic. Sometimes on viewing the previz, there would be new inspirations and a new direction might be explored to see if it felt more in line with the director’s vision. For particular sequences, we would break down the script and work out shots. For one section, we talked through the action and moved things around using Post-It notes on the wall until there was a nice flow of continuity, and motivations for the characters! It was all very collaborative.”

We talked through the action and moved things around using Post-It notes on the wall until there was a nice flow of continuity, and motivations for the characters!

“The main purpose of previz for this project was to help map out the story, as well as exciting action and fun character moments,” states Lopez-Duprey. “A lot of the previz we did was channeled towards visualizing and developing a thrilling third act, including the final confrontation between Venom and Riot.” Previs helped in figuring out how many visual effects shots, primarily featuring full CG characters, needed to be created. “Previz was additionally used to flesh out ideas and pitch concepts to the studio,” remarks Biziou.

“One main sequence we worked on both in previz and postviz was the Atrium Fight, where Eddie Brock transforms into Venom and battles a SWAT team. Another main sequence we collaborated on is the bike chase, where Eddie flees agents who are trying to capture him and he jumps on his motorcycle and races through San Francisco. This was a pure postviz sequence and had a lot of trailer shots in it. In addition, we prevized the opening of the movie where a space shuttle enters Earth’s atmosphere and crashes in China. Yet another scene we visualized is the sequence of Venom climbing a building, then falling off at the sound of a passing airplane.”

“We had an array of incredible concept art, storyboards, and models to work from as we created previz environments and scenes,” states Lopez-Duprey. “We worked from scratch to develop some of the more unique situational effects and abilities that the Symbiotes would exhibit throughout the action.” Previz was created by utilizing Maya, After Effects, ZBrush, and Photoshop, while the postviz software toolset included Maya, After Effects, ZBrush, Pixel Farm PF Track, Substance Painter, and Premiere.

“Sometimes shots had to have intricately detailed animation and lighting,” notes Lopez-Duprey. “At other times, it was more about communicating the action with storyboard elements layered into our previz environments. Some of the 2D assets from the art department were so good that we could use them in place of characters and effects.” Careful attention was given to the pitchviz. “For the opening sequence, which was also pitchviz, we brought the animation to a very high level of lighting and detail,” remarks Biziou. 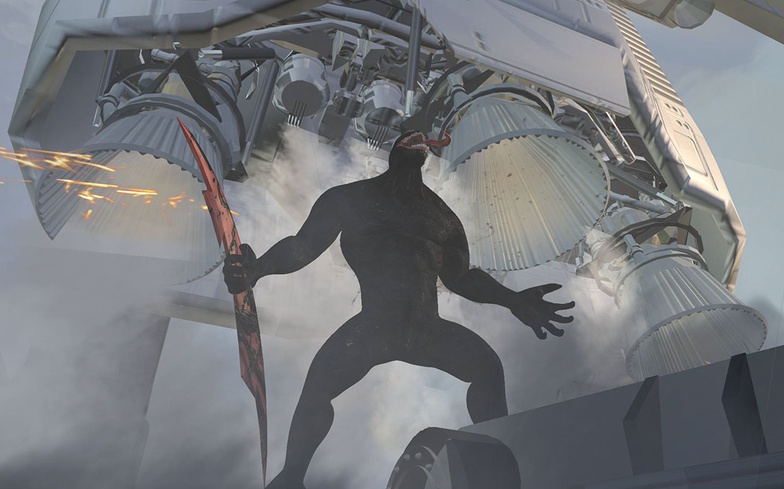 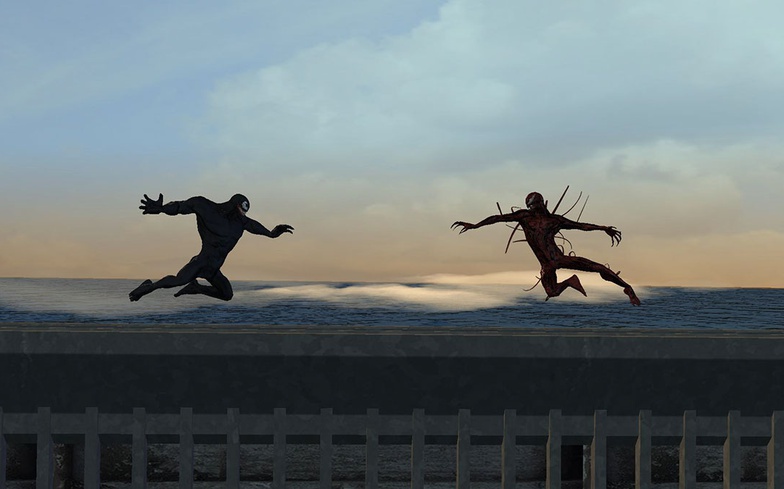 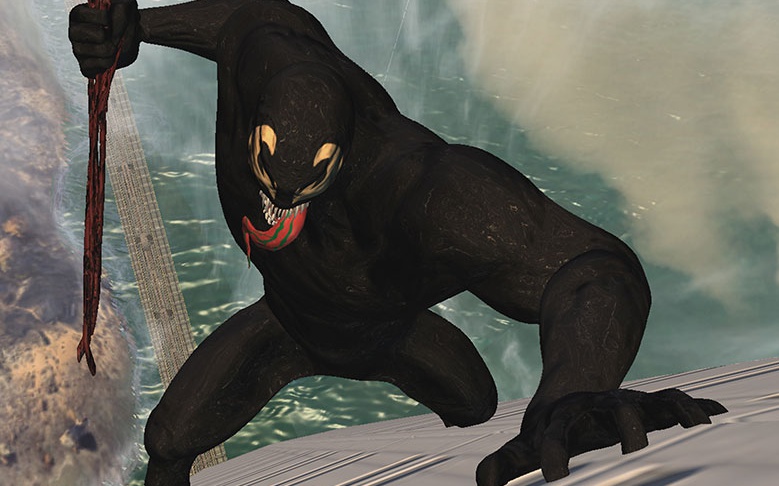 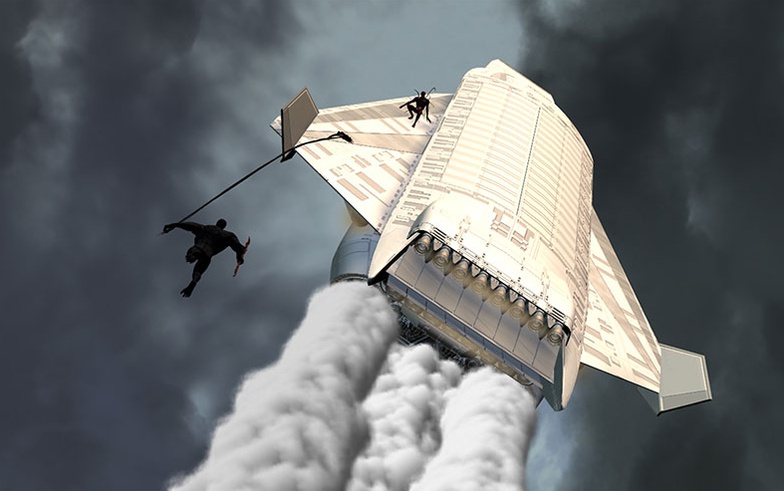 “For the Atrium Fight, we began as blocking, then moved into a more fleshed out visualization and lighting.” Central to the work was figuring out what makes Venom such a beloved character. “We worked towards making sure that the action paid homage and stayed true to him while hopefully helping create something exciting and new,” states Lopez-Duprey. Through the visualization phases a daily conversation took place with Ruben Fleischer. “We would discuss the sequences, the intention, and motivation of the characters and how best to make things look cool,” adds Biziou. “He was very much on board with previz and postviz, and found visualization to be valuable to the filmmaking process.”

As for creating previz and postviz featuring a principal CG character, Biziou has some words of advice. “The first step is to make sure that we are helping the director realize their vision, to tell the story of the character above all else. That said, it’s also about telling the story of the character in a fun and interesting way while taking into consideration the characters’ abilities and the relationship to the world that they exist in. How fast are they? How strong? How large or small? It is also important to keep in mind the physical cinematography parameters and the scale of the real characters and how eyelines and movements in camera work.”

“When moving to postviz, the visual effects supervisor is responsible for assisting in making sure eyelines are correct, keeping enough tracking markers up, and communicating with the DP the need for run-up time and framing considerations for where the CG character will be placed and interacting. Above all, communication is king. The more you can communicate with the other departments the smoother the process with flow.”

The first step is to make sure that we are helping the director realize their vision, to tell the story of the character above all else.

A level of realism had to be maintained throughout even with the camera angles and movements. “It was important to ‘ground’ everything, especially with such fantastic characters moving about,” remarks Lopez-Duprey. “We had to make sure that a crane, drone cam or a camera operator could always capture the shot in real life.” In regards to the Motorcycle Chase, the focus was visualizing the actions of the drones and the reactions of Venom. “For the Rocket Launch Battle, it was about showing the unstoppable nature and speed of Venom and his enemy.”

“Not only that, but they were constantly using new and interesting attacks to stop each other along the way. The whole team contributed to creating new effects and rigs on the fly in previz to visualize this interaction.” The workload was large in scale with the Rocket Launch Battle being a personal favorite of Lopez-Duprey, while Biziou looks forward to seeing the Atrium Fight. “I’d say the most challenging aspect was the high volume of shots and the changes, new tasks and updates that would come along each day at fast pace,” reveals Biziou. “We approached this with a lot of dedication from our artists and coordinator with much support from the production team.” 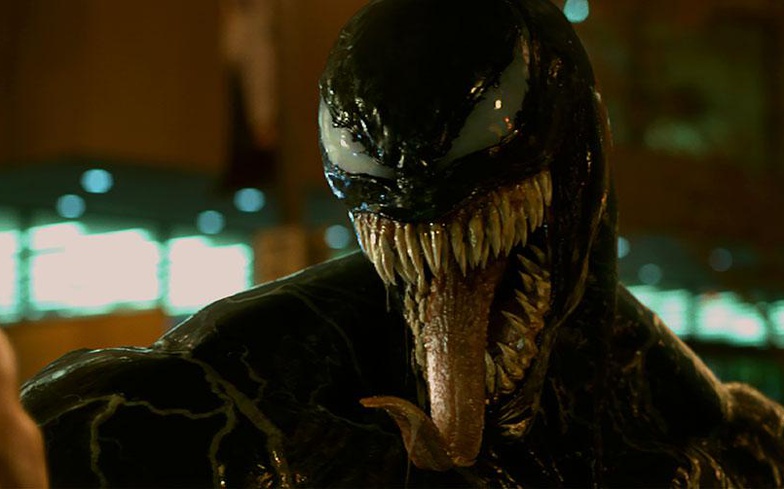 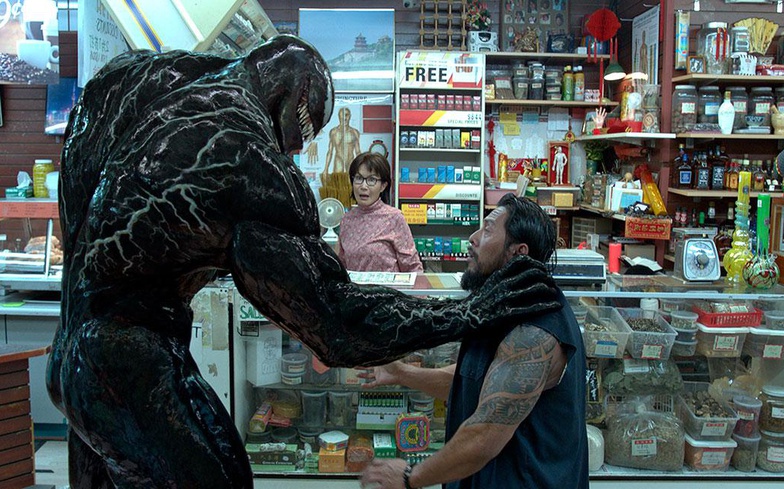 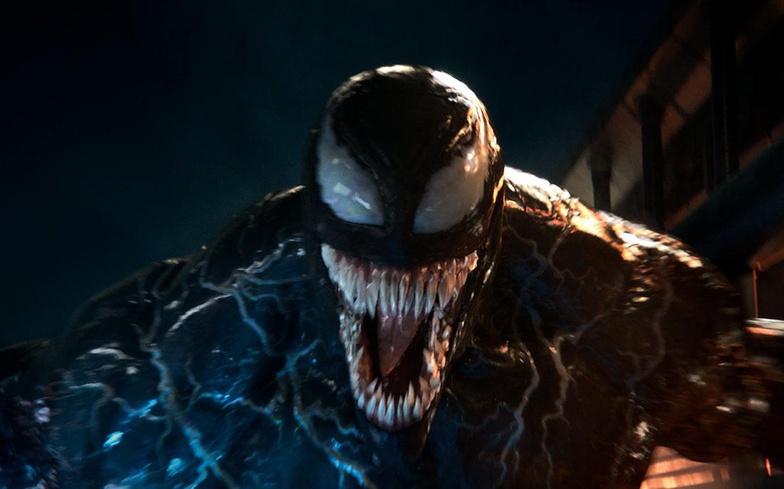