The Boxtrolls: Laika outside the box

Best known for its modern approach to stop motion, The Boxtrolls pieces together old and new tech into a beautiful whole. Evan Shamoon visits the Laika set in Portland!

Best known for its modern approach to stop motion, The Boxtrolls pieces together old and new tech into a beautiful whole. Evan Shamoon visits the Laika set in Portland! 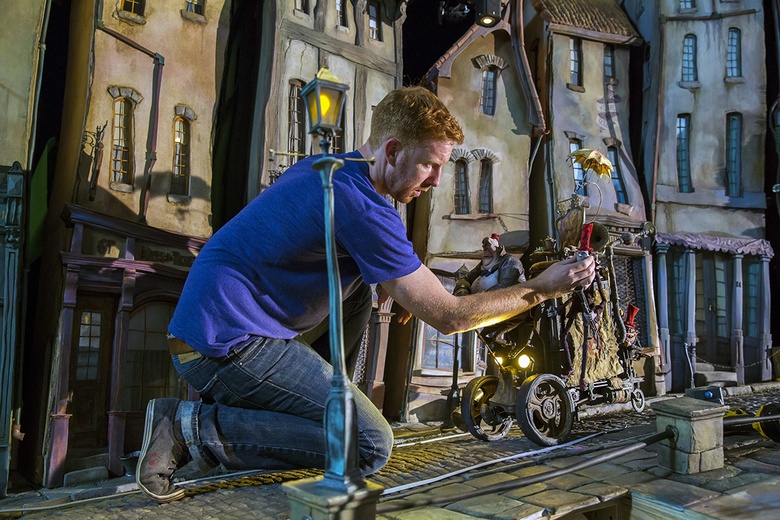 There are likely few jobs more appealing to stop-motion animators than a position at Laika. Located just outside Portland, Oregon in a small, tech-centric suburb called Hillsboro, the studio has strongly embraced stop motion at a time when computer-based 3D animation dominates the animation industry landscape.

Laika now has two extremely well-received feature films under its belt - Coraline (2009) and ParaNorman (2012) - and is closing in on finishing its third, The Boxtrolls, which is slated for release in September.

But Laika isnt simply a refuge for Los Angeles-averse luddites, as the studios approach involves various technical twists and turns. While the animators and designers still create each of its characters and most of its sets from scratch, by hand, an extensive use of 3D printers for rapid prototyping along with computer graphics is essential to the studios creative process as well. 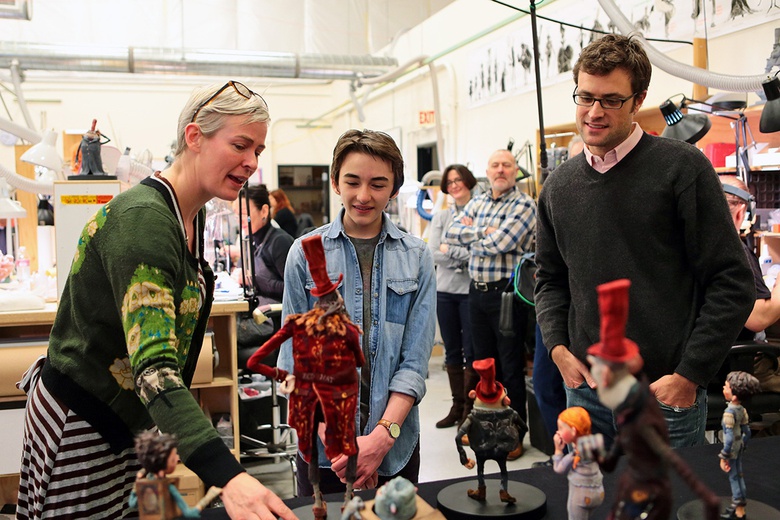 Creative supervisor of puppet fabrication Georgina Haynes explains the background of one of the puppets to voice actor Isaac Hempstead-Wright, while director of rapid prototype Brian McLean listens in
© LAIKA, Inc.

Touring the 151,140 square foot building, ones mind cant help but reel at the sheer scale of the production. The warehouse space is divided into a number of small sets by towering black curtains, which stretch from floor to ceiling to preserve each lighting environment. Individual animators toil away on their own elaborately staged miniature productions, using rigged Canon 5D Mark III DSLRs and a host of lenses to capture each individual frame in 5K resolution. 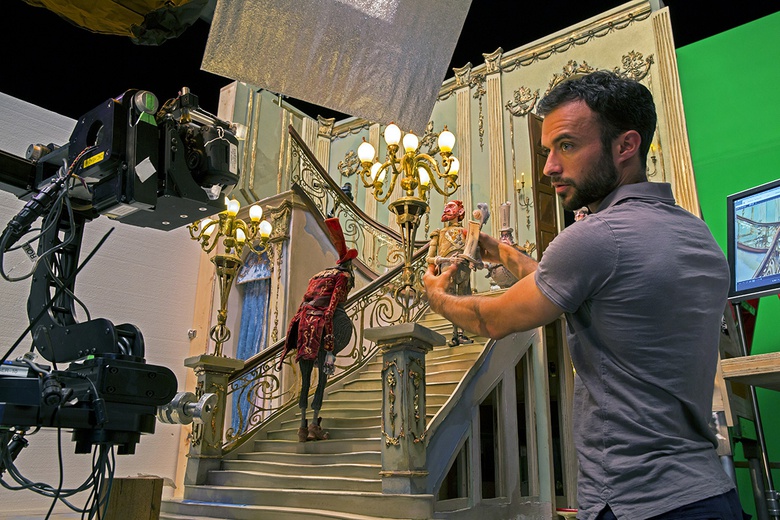 Laikas Florian Perinelle maneuvers the Lord Portley-Rind puppet into position on one of The Boxtrolls elaborate sets
© LAIKA, Inc.

Keeping track of the hundreds of moving parts that must change but still remain structurally consistent from one shot to the next feels like a nearly impossible task on its own, let alone producing the necessary drama carefully constructed into each image.

When its done, The Boxtrolls will be 87-minutes long which adds up to 5,220 seconds, or 125,280 individual frames of animation. Its the studios first period piece (based on Alan Snows novel Here Be Monsters!), and tells the story of an orphaned boy named Eggs, raised by underground cave-dwelling trash collectors called The Boxtrolls.

The conflict comes when The Boxtrolls are targeted by an evil exterminator named Archibald Snatcher, played by none other than Ben Kingsley in what is (rather remarkably) his first role in an animated feature. 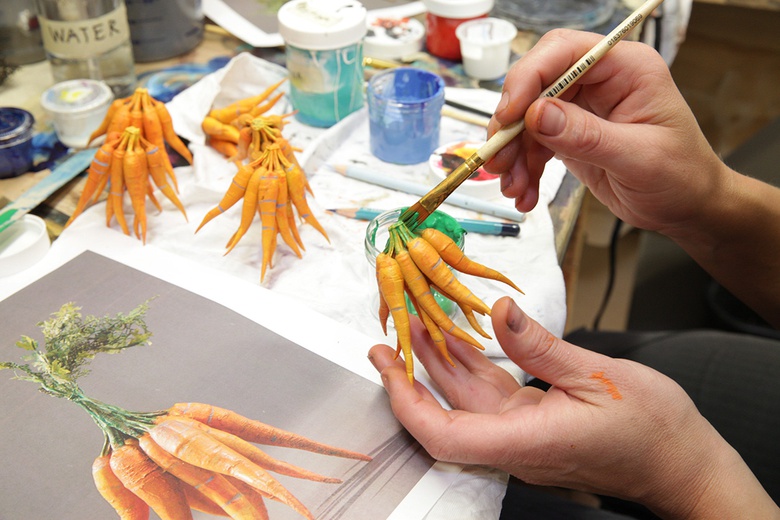 Behold the cutest carrots known to man. A painter puts on some finishing touches, adding a bit of green paint to the stalks to get them ready for their big screen debut
© LAIKA, Inc.

Sets and characters clearly reflect their Victoriana and Edwardian influences, constructed from fabric, wood, foam and steel, much of which has been laser-etched to achieve an incredible level of detail. Characters are elaborate constructions, from the complex metal skeletons full of hinges, joints and sockets that underlie them, to their ornate exteriors, constructed from everything from embroidered knitwear and hemp hair to silicon skin, all of which is custom made on premises.

To convey the emotion required from its characters, Laika has turned to emerging technology. Brian McLean is in charge Laikas 3D printing and rapid prototyping department, which is comprised of 25 CG artists and engineers, along with another 25 doing quality control and post-processing on the thousands and thousands of individual parts the studio generates.

Boxtrolls Behind the Scenes Trailer

With Coraline, the studio was the first to take the age-old process of replacement animation and bring it into the 21st Century; that process has been drastically evolved with The Boxtrolls, both saving precious time and giving the filmmakers more creative control over their work.

On Coraline, artists would sculpt the faces in Maya, and then print them out in a solid white plastic. A paint team would then need to go through and paint each individual face an extremely time-consuming process, fraught with compromise.

Coraline has 5 freckles on each side of her face, and we negotiated with [director] Henry Selick for weeks on how many freckles she had, recalls McLean. We knew itd take [time] away from poor painters every time they had to paint another freckle.

Tweaking a puppets movement one frame at a time this is the animation process, Laika-style
© LAIKA, Inc.

The result was still an impressive blend of CG-style animation that could achieve a broader range of facial expressions than older methods, working in unison with the wonderfully tactile feel of stop motion. But as evidenced by the freckle situation, design choices were being limited by the process, and so between the production of Coraline and ParaNorman, the studio started experimenting with color 3D printing, and the results will be on display in The Boxtrolls.

The digital process begins by taking the incredibly detailed physical maquette for a character, and scanning it into the computer using a 3D scanner, at which point its massaged by modelers into its final aesthetic form.

READ MORE ON THE NEXT PAGE... 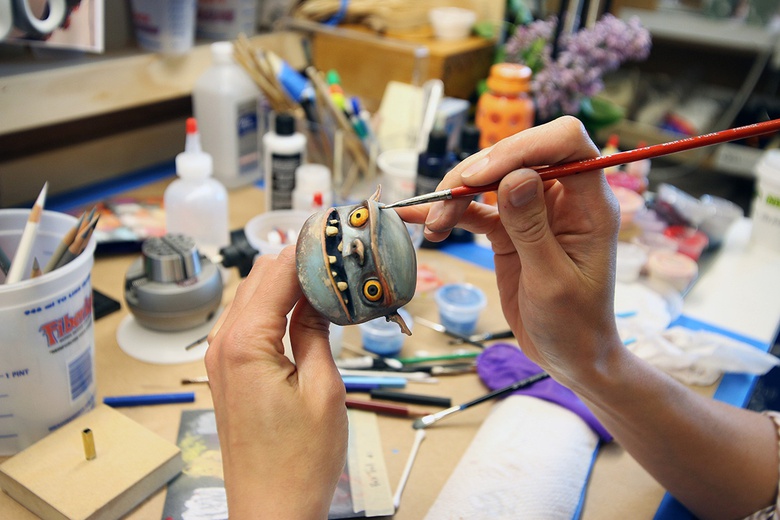 Painting the head of Shoe, one of the films titular Boxtrolls, piece by tiny piece. Roughly 70-80 tiny moving parts sit beneath each face
© LAIKA, Inc.

From there, the modelers put on their engineering hats; were shown an exploded view of some 70-80 tiny moving parts that sit beneath each and every face, all of which are designed to give the animators the most possible control over their characters eyeballs.

The artists then create and print out hundreds of facial expressions, which become emotional toolboxes for the animators. We have modelers, we have riggers, we have animators and we have texture painters, says McLean. But instead of rendering out the frames, were printing out faces. The printer is ultimately our rendering station. Animators are equipped with various face 'kits' (smile kits, frown kits, sneer kits), depending on the scene theyre working on. 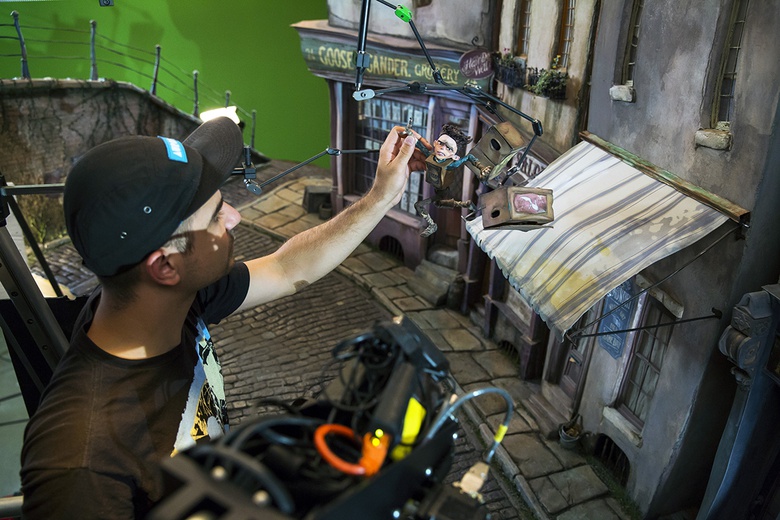 Laikas Danail Kraev works on the Eggs puppet as he bounces off of a roof. Individual animators essentially own the scene theyre working on from start to finish
© LAIKA, Inc.

Nothing comes easy in the world of stop motion. Each character presents its own set of problems, and of the 60-plus characters the studio has created over its three films, theres never been an opportunity to reuse a set of facial parts.

On ParaNorman, we happened to be one of the largest consumers of color 3D printers in the world, if not the largest, says McLean. And as the technology has evolved, so too has Laikas process. Theres been many years of R&D; to make sure that when you take a photo with your digital camera and print it out, the colors look pretty decent, says McLean. With 3D printing, that stuff hadnt really been done yet. Wed get a wonderful red on the screen, and print it out and itd come out orange.

As we tour around the studio meeting one animator after the next, it becomes clear that the process remains a decidedly labor intensive one; a skilled animator will be lucky to complete four seconds of footage in a given week, and the tedious frame-by-frame process is run through multiple times to ensure the best possible performance. Still, its come a long way.

Weve evolved from where we were just a few short years ago, says McLean. Where Coralines facial animation was generally designed to allow for believable lip-synching, theres now complex musculature behind every characters face, which brings to the surface the kinds of subtleties that humans use to convey emotion. 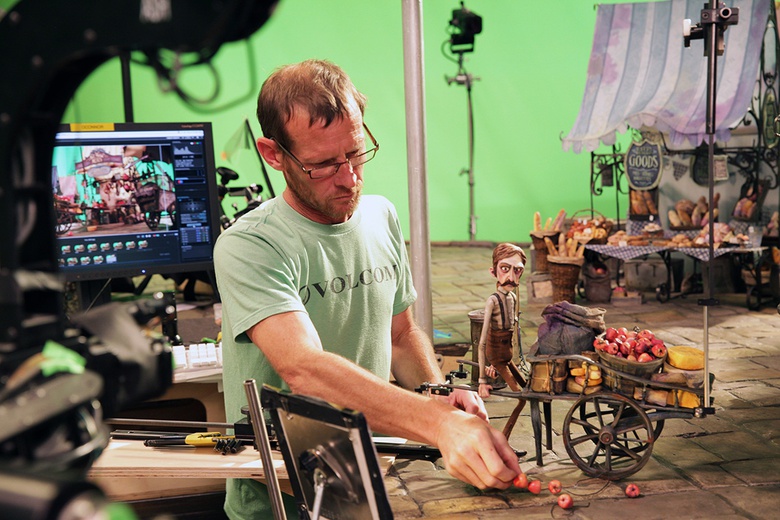 Laikas David Pugh works on The Boxtrolls extensive Market scene. The film is 87 minutes long which adds up to 5,220 seconds, or 125,280 individual frames of animation
© LAIKA, Inc.

Speaking to the films directors, it becomes clear that the team is wedded to the story, not the technology. Many of its elements particularly backgrounds, such as when a busy street extends deep into the frame, or when a large crowd gathers in a square are built digitally and then composited with the stop motion work.

If the look can be attained practically, well do it using stop motion techniques

When I read this story, it just felt like that quality that you have in stop motion of real light hitting real objects, things made out of fabrics and wood, that has this textural, gritty quality to it this story had that kind of gritty realism to it, says co-director Anthony Stacchi, who worked for years at ILM on photorealistic special effects.

Its hard to quantify, but they felt like they went together. He deeply respects the more 'purist' stop motion films those on which all of the effects are done in-camera, smoke is made from cotton and rain is made from gelatin - but says The Boxtrolls is not one of them 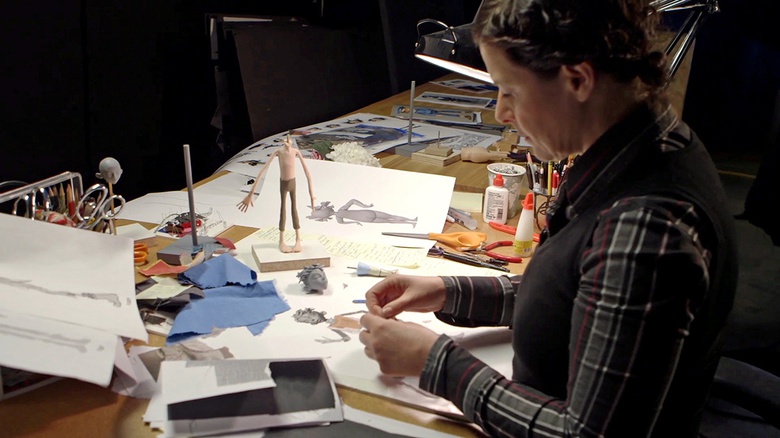 Those films are great, and theyre beautiful, and sticking rigorously to those limitations has its own appeal, he says. What were doing is a real hybrid; the core is stop motion, the look is stop motion, but a big percentage of it is CG. 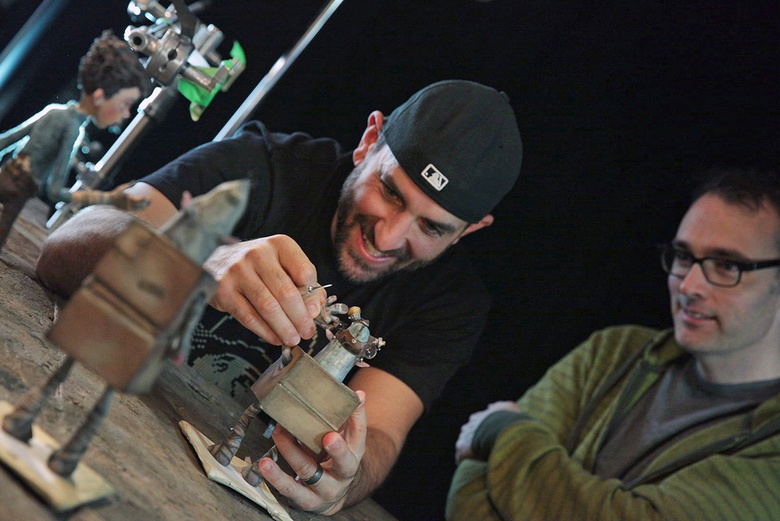 Animation supervisor Brad Schiff exactingly composes positioning and framing for one of the Boxtrolls while the films director Graham Annable looks on
© LAIKA, Inc.

Things are driven by look, he continues. If the look can be attained practically, well do it using stop motion techniques. He points to the example of a sewer scene that called for rippling water and glints of light coming through the manhole covers, the intricate construction of which we later see on set. You can do it in CG its not terribly hard, and theres off-the-shelf stuff but our rigging supervisor Olly Jones came up with these two plates of ripple glass and lights playing on the bottom. And it looks as realistic as the CG stuff weve done, but theres a quality to it thats a little different, a little more hand-made it fits in the world a little better.

We dont make a distinction, agrees his co-director Graham Annable. Shot-by-shot and sequence-by-sequence we make the decisions on what plays best to the style of the movie. Its always a toss-up, but its always felt like we were sort of free to go either side 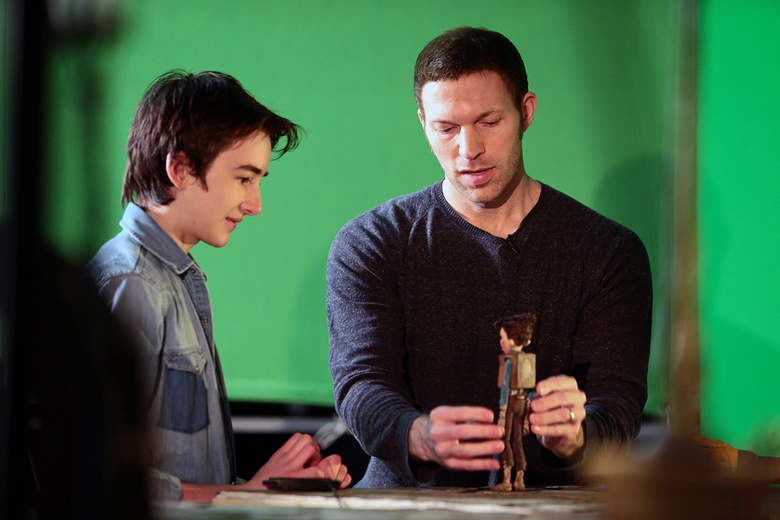 Top facts about The Boxtrolls:

An animator typically took 1 week to complete 3.7 seconds worth of footage, which is just under 90 individual frames
There are 14 different fabrics in Lord Portley-Rinds white hat!
The movies smallest costumes were for Eggs as a baby: the sweater, measuring 3.5-inches from cuff to cuff across the length of both arms and chest, and the baby socks measuring 5/8-inches long
The stop-motion flames 'burning' in the furnace of the Mecha-Drill are courtesy of a working iPad displaying a loop video inside the 'mouth' of the device!
More than 20,000 props were handmade for the movie
55 different sculpts of prop cheeses were created for The Boxtrolls
The movies smallest prop was a tiny sewing thread and needle! 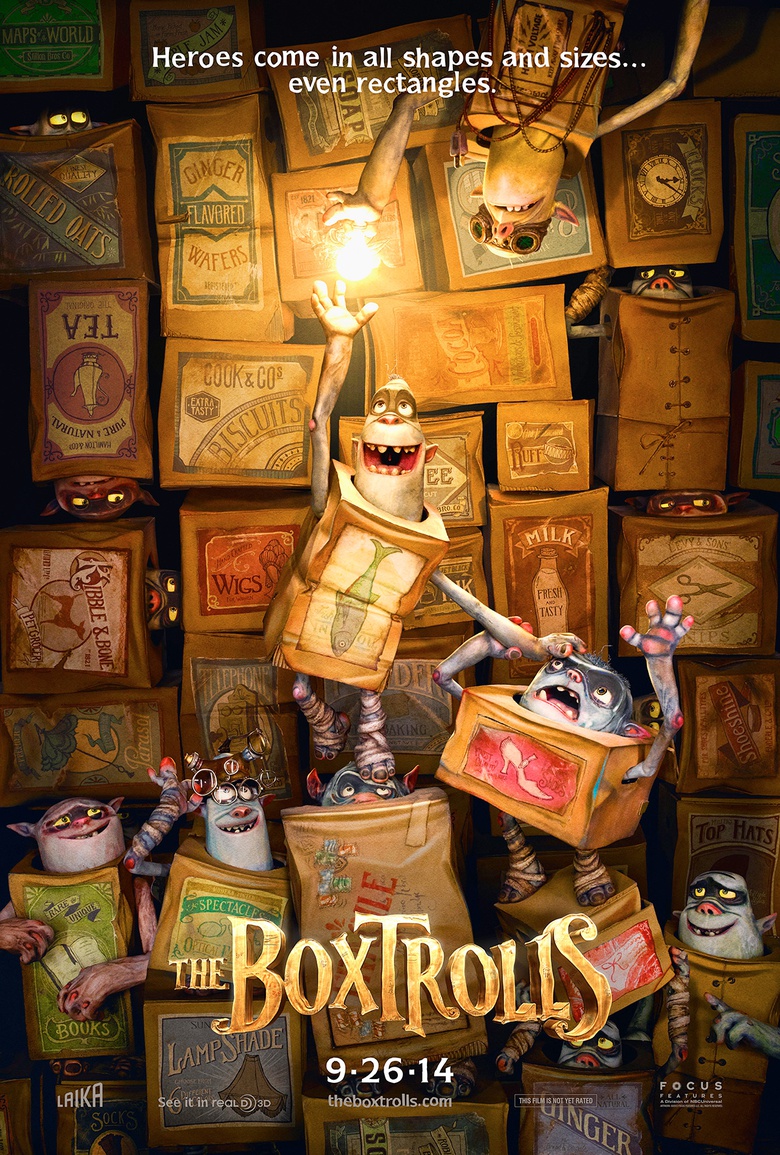 Find out more about Laika
Visit the official site for The Boxtrolls
Learn more about Here Be Monsters!, the book