Setting Sail with Pirates of the Caribbean: Dead Men Tell No Tales

Take a closer look at the previs, FX and CGI created for Pirates of the Caribbean: Dead Men Tell No Tales... 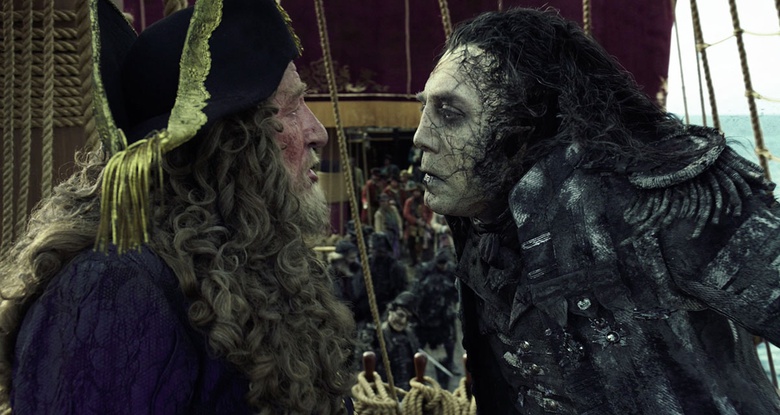 After seeing the CG creation of Davy Jones, Gary Brozenich was inspired to pursue a career in visual effects, and a decade later gets to supervise the fifth installment of the high seas franchise with the release of Pirates of the Caribbean: Dead Men Tell No Tales...

Norwegian filmmakers Joachim Rønning and Espen Sandberg take the helm this time around which was not a surprise to Gary Brozenich who was involved with the project from the early stages. They had done Kon-Tiki which was a far smaller budget film but had a lot of similar requirements. Previs was created to determine the amount of set builds, special effects, and visual effects needed to visually realize the various action sequences. Theres a chase sequence that happens between two ships which are running in tandem next to each other. We have two of the key actors jumping back and forth between the two ships from the cannons and theres a whole staged and choreographed fight that happens between them. We previs that down to the frame, cut it with the directors, translated that into a live-action shot element by building a partial ship next to a large set build of the Black Pearl, and shot those two things side by side.

A younger version of Jack Sparrow (Johnny Depp) makes a flashback appearance.
Audiences around the world are so schooled in Jack Sparrowisms so it was important to all of us was to make sure that Johnny was the one delivering the actual performance, states Gary Brozenich. Lola VFX was the most appropriate company to do that because they work directly with the actors performance and try to step on it as little as possible. We would have Johnny do the Jack Sparrow performance that he wanted and that is the main take. We would then have the double [Anthony De La Torre] do an approximation of his performance as well as a secondary take but that was mainly used as a reference pass of somebody who is the right age and doesnt have all of the life behind him that Jack Sparrow does now. 21 Jump Street and Whats Eating Gilbert Grape also served as points of reference. We did push him a little younger than that.

Seeking revenge upon Jack Sparrow is the ghostly Captain Armando Salazar (Javier Bardem) and his crew who have the ability to run across water. We did shoot Salazar and all of the crew members running across a blue screen environment, reveals Gary Brozenich. However, those are almost entirely CG shots largely because so much of them is replaced as they have missing parts of their body as well as floating hair and clothing. Primarily what we kept of them was their run, gait and faces. 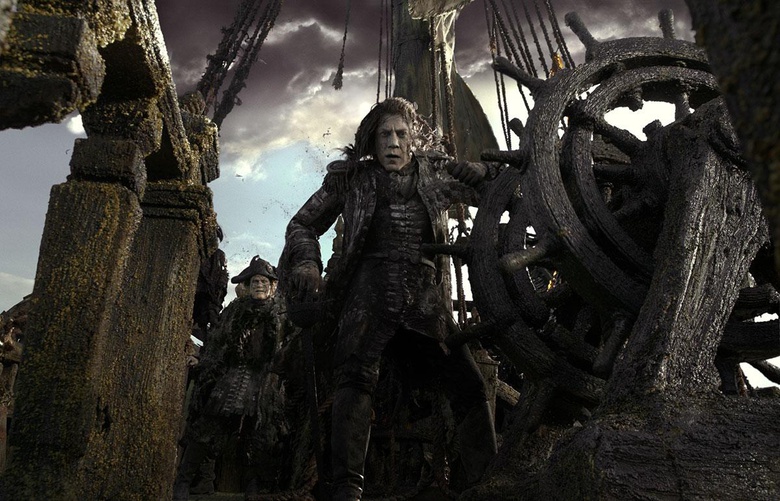 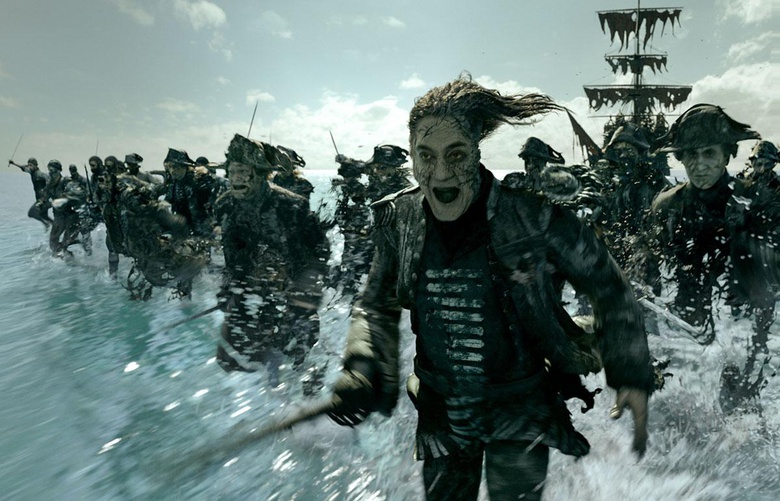 The antagonists of the story are eternally trapped in a drowned state. When you have somebody underwater they move at what looks like 96 frames per second. But when we were shooting them on the plate theyre moving at 24 frames per second. Trying to marry those two together was something we knew was going to be a creative leap. How would that work? Would that be distracting? Would the audience buy it? We hired a stunt guy for a day, got him in full costume and wig, and took him into a swimming pool. I dived in with a GoPro along with a professional photographer with a Canon 5D, and we shot him doing various actions.

Live-action and CG had to be married together within the same sequence. Salazar and his men are on the Silent Mary pursuing Jack, Henry Turner [Brenton Thwaites] and Carina Smyth [Kaya Scodelario] in a rowboat, states Gary Brozenich. Within literally a few cuts of each other there are shots filmed on a blue screen stage, shots filmed in a tank with a blue screen, and shots filmed on the location with real water. 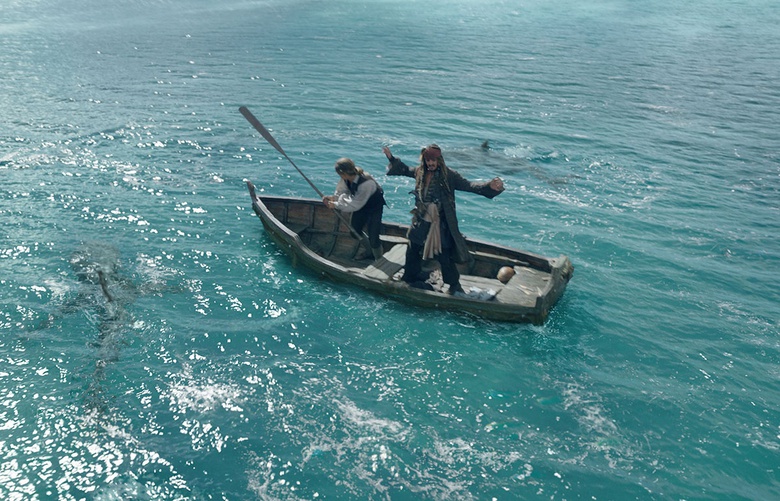 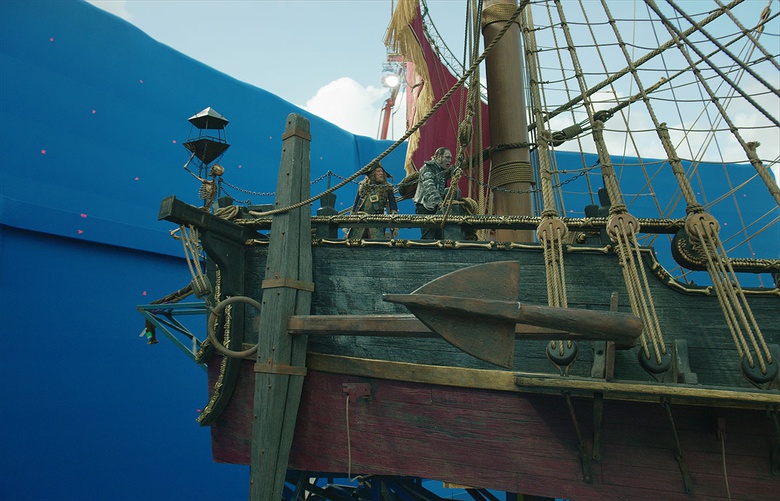 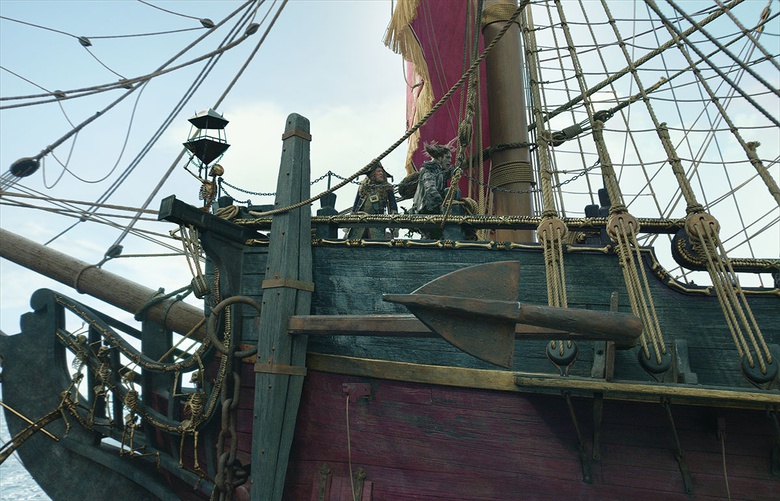 Massive practical ships were built. There was a 150 foot and 110 foot vessels. On the 150-foot vessel 140 foot was built of the main deck. Each of those ships had a fully costumed crew go onto the decks. Special effects built a teeter totter rig that was 30 foot by 25 foot section of the hull of the second ship with full cannons; it was on a hydraulic rig that was able to move at speeds and different axis of movements to replicate anything that we wanted it to do. 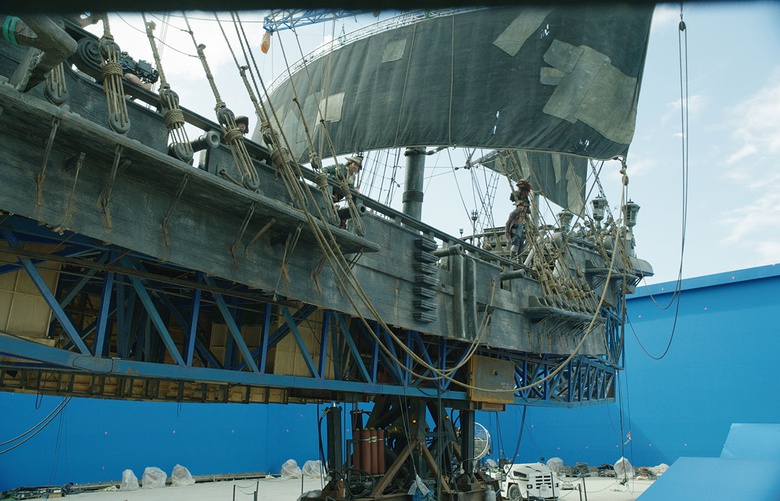 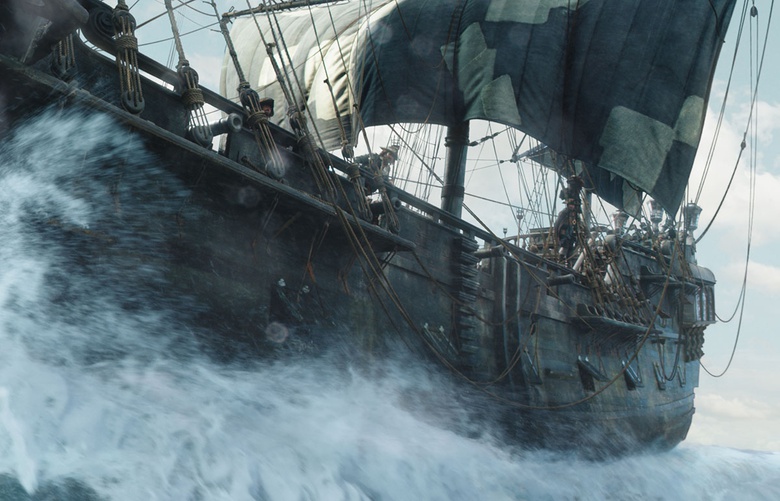 Background and performance water simulations needed to be produced for the action-adventure film. MPC was responsible for all of the water work, remarks Gary Brozenich. We also have the ocean parts in a non-physics based way so we needed to be able to drive that as well. It was a combination of Bifrost, Flowline and Houdini often within the same shot all creating components to the best of what they could give. If you deal with one software package you often get one flavour of water.

Achieving a visually seamless combination process was not easy. They had to be able to generate caches from a piece of software that would draw a foam simulation from another. Or a wave being generated by one piece of software and the performance water surrounding it generated by another. In the deep background we used an ocean deformer called Tessendorf (which was updated for the movie) to simulate the dips in the water surface. Aiding the procedure was a significant water plate shoot in Australia and Key West. We had a great rig setup by Klaus Cam with three RED EPICS shooting vertically with 15mm lenses placed on a descender rig underneath a helicopter.

Atomic Fiction was involved with digitally enhancing the town of St. Martin. St. Martin was a massive set build that was done in a great location in Australia, states Gary Brozenich. When youre down in the ground the set was almost entirely in camera. There were portions and bits that we topped off. But places like Black Rock Island were a much smaller build. A 40 foot by 50 foot section of rock was built but when you have an entire island then you can imagine how much we needed to add. On top of that we werent shooting it by the ocean. We found a black rock location nearby and sent a camera crew down there to shoot plates on several different days to give us various lighting environments for morning, noon and night. When it came to the water hitting the rocks the live-action footage prevailed. I tried to do as much of that with plates as I could.

If you look at the design of Salazar, his crew, Silent Mary, and the seagulls, which are always with the ship, they all represent the same tragic event that led to their demise, observes Gary Brozenich. The seagulls are in every single shot that you see on The Silent Mary for background texture. There are shots where Salazar is looking over the side of the deck and seagulls are lined up along the rail or on the sail and theyre all doing the same action. Ghost Sharks appear in opportune moments in the film. There are three of them. We had full scale practical builds of the sharks and there was direct interaction between some of the ghosts and the sharks. But when the Ghost Sharks go into the water thats when they become fully CG.

The biggest creative challenge was Salazar since Javier Bardem is such a heavy weight actor and were doing such an unusual thing with his physics and world, notes Gary Brozenich. With over 150 full CG shots mixed with live-action shots where sometimes two thirds of the frame is a digitally geerated background combined with digital prosthetics on characters for whole dialogue scenes you can imagine the overhead! As for a favourite moment Brozenich states, The Cannon Fight. Its a great combination of traditional filmmaking with amazing technological advances in special effects and CG. Its a lot of fun. There are so many great scenes. Its back to back action back to the spirit of the first one.