Into the Storm: MPC & The Finest Hours

MPC's VFX team share the processes behind the epic visuals in the latest watery blockbuster, The Finest Hours...

In order to recreate the maelstrom that split the oil tanker S.S. Pendleton in two, leading to a dramatic U.S. Coast Guard rescue operation in 1952, filmmaker Craig Gillespie (Lars and the Real Girl) relied on MPC for ninety-percent of the visual effects work in The Finest Hours with additional environmental support provided by Mr. X.

Overseeing the visual effects was MPC VFX Supervisor Kevin Hahn who received internal support from a colleague. "I was in Vancouver working on stuff and sending it down,” explains MPC VFX Supervisor Seth Maury who had to manage 1,100 shots with 550 of them involving digital water. "Kevin would sit with Craig Gillespie and watch the cut. When Kevin came back to Vancouver the two of us divided and conquered. There were three broad categories: the big hero water, 300 generic shots that were a single shot of the guys on the boat or a dialogue scene, and weather which included snow, rain and stuff on the land like making the town snowier."

"Within each of those shots we broke them down even further. Luckily there weren't too many locations that we had to work with. We did the bulk of the work in Vancouver but sent some shots to Montreal and some composting work to London. Even splitting the work in-house was more challenging because of how big the data was so we had to be smart about what pieces were sent to different locations at MPC.”

"We had some reference images and a little bit of concept art had been done that wasn't photo-real enough for us to base something on it,” states Seth Maury. "It gave us a mood for how stormy something needed to be. There was definitely previs later on and especially for the all the CG shots. That helped us to get going.” Waves that swell up, rollover and crash appear in over 100 shots. "We started in effects to define some generic oceans for the different sequences,” explains MPC CG Supervisor Adriano Rinaldi, whose team simulated everything from calm to stormy water, allowing for a virtual scout to uncover pieces of ocean that worked best for shots.

"Then we gave a geometry cache to animation which put the camera in different places on the boat and deck. The main reason we chose this approach was to create a realistic water surface allowing the ocean solver to generate more accurate velocities and swells for us. We wanted to create a model as accurate as possible keeping consistency between shots and sequences.” 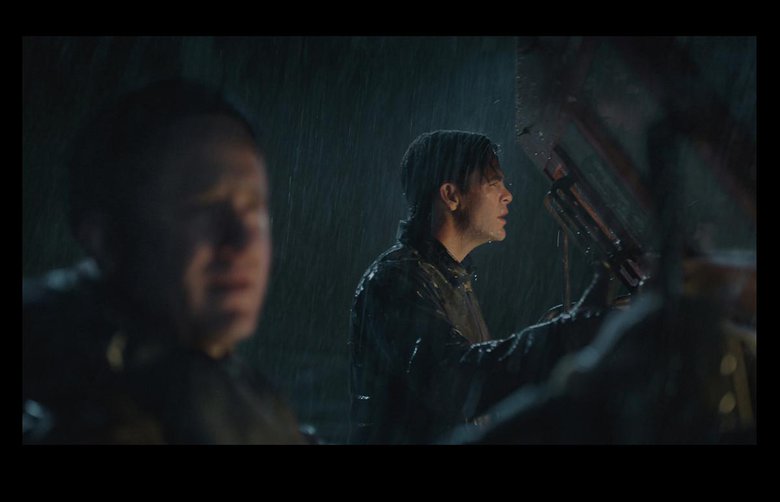 Seth Maury made an interesting discovery. "There's a sequence where the boat crosses the Chatham bar. I had spent a lot of time growing up in New England but had never paid any attention to how the wave patterns were different on a bar. On YouTube there's great reference footage of the Coast Guard out in these ships doing training exercises in stormy seas on a bar so you can see how big is a swell or how smooth the water gets in-between swells, or what it looks like when waves crash on a bar.” The storms and swells on YouTube were never big enough for what was needed. "We had a storm of a century with waves so big that nobody is crazy enough to go out in so with that we had to extrapolate.”

"Animation and FX have been working with the Rigging Department to setup an advanced flexible rig that could shape the waves and swells to the right size, speed and timing,” states Adriano Rinaldi. Early on, the CG water resembled a plastic surface. "The Lighting Department went back to figure out how to get refractions and the quality of water where it looked murky but had depth,” remarks Seth Maury who produced many different kinds of mist.

"There was air mist blowing across the surface, crest mist whenever the waves crested over big or small, and then we had speed mist which Guillaume had on Life of Pi which was this atomized water constantly blowing across the ocean surface. Adriano had the controls to generate it anywhere on the surface of a wave. The speed mist gave an impression wind and sold the enormity of the storm.” It was important to convey the right scale. Sea foam was an essential element. "From the foam structures you can actually understand speed and size of the wave,” notes Rinaldi. "There are also many different layers from the various types of spray that all together they create the right scale of the wave.”

Different parts of The Finest Hours were to have rain, snow and wind but as the development of the visual effects progressed they naturally appeared everywhere to heighten the stormy atmosphere. "I live up on the 20th floor of a building and I filmed a lot of reference off of my balcony,” reveals Seth Maury. "We had a good rain storm going on and I shot it with my SLR. You can barely make out the rain even when it's in front of you. We built up depth hazing then had rain in front of the lens and at a certain distance had it fall off.”

Stormy skies are surprisingly flat because there is no directionality to the light. "We brought it back 15-percent from that to have a little texture in the sky and being a Hollywood movie there had to be some directionality to the light to get a few shapes. Even in the middle of the storm sometimes there will be a break in the clouds and the sun breaks through. We did that to make it look nice and a lot of the set photography had some key light so we had to match our environment to that.”

"Sometimes we went with a long lens as if it was a sweeping helicopter shot but with a handheld feel,” states Seth Maury. "When we were down low on the CG36500 rescue boat looking up at the S.S. Pendleton it was mostly wide lenses as if from someone's POV to create the impression that you were there.” A night time scene takes place in the middle of storm where half of the S.S Pendleton is stranded on a sandbar.

"We took the route of a soft back three quarter light and tried to get enough little metallic highlights that defined the shape and curve of the ship.” A library of splashes from different angles rendered under various lighting conditions was assembled to assist the compositors. "It worked most of the time and when it didn't we treated the splash as a hero one rather than generic,” remarks Adriano Rinaldi. "That way we were able to run many shots together and then focus on the ones needing more attention.”

"There was a lot of stuff shot on a gimbal and in a tank,” reveals Seth Maury as the practical effect cut down on the number of tricky shots where water had to be added to the faces of the cast members. "The most useful part of that for us was the water interaction across the surface of the boat and the actors.” The practical water, foam and sharp highlights allowed the CG augmentation to be grounded in reality. 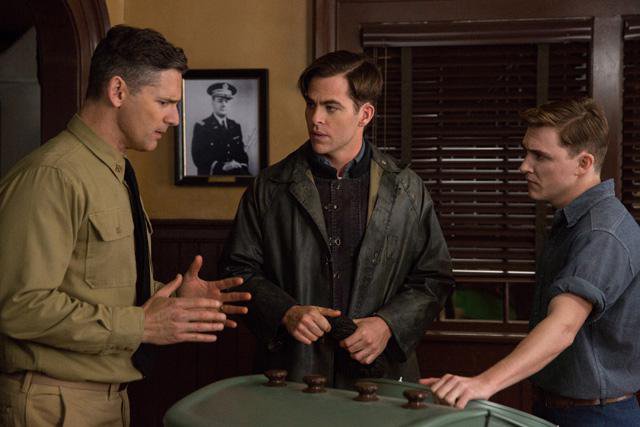 "For the 36500 and the Pendleton, we had a digital version of both of those. For the 36500, if it was a tighter shot or shot in the tank practically we tried to use it as much as possible. There were a few cases where the camera move was too different from what was shot so if we could project it onto geometry we would but sometimes we replaced that. For the Pendleton we used the CG version a lot. A partial set piece was built so it was for the guys to stand on for the upper deck and a few shots for looking up from the water surface up at them but for the most the Pendleton shots were CG.” 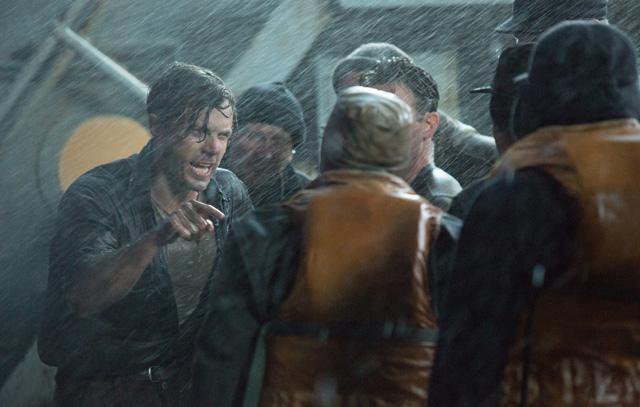 "All we cared about was the object track of the boat which was lifted out of the plate and placed into a CG environment,” remarks Seth Maury. "As long as the match movers could lock the boat down we could make it work.” Rendering the water was tough. "Flowline was the tool for most of the water simulations. Maya was used for wave rigs, layout and animation - Houdini for environmental effects such as rain, snow and blowing mist," explains Adriano Rinaldi. 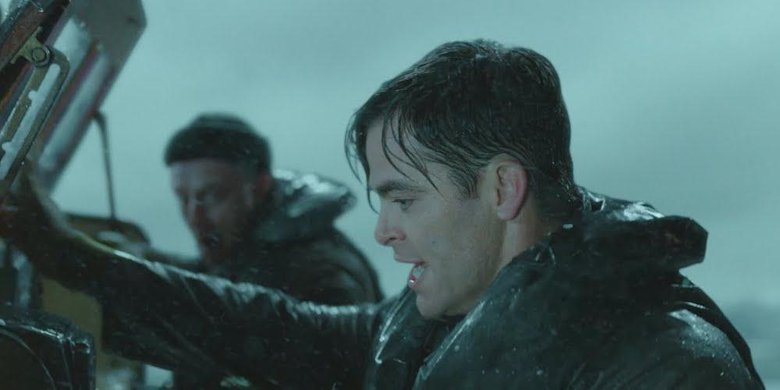 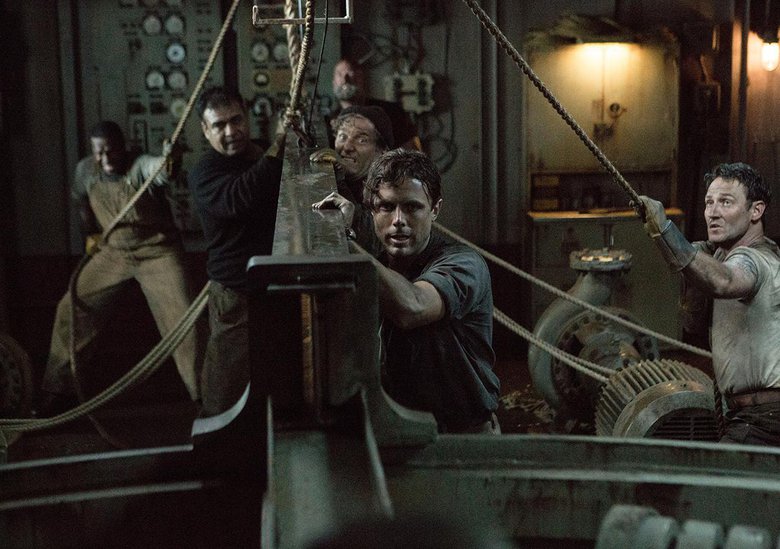 "Rendering was done through V-Ray and PRMan. We used V-Ray mainly for the storm sequence when they're trying to cross the bar. It was chosen for multiple reasons, mainly for the flexibility to render implicit surfaces directly from Flowline and for the strong integration with the tool. For most of the other sequences, including oceans, spray, speed mist and volumetric renders we used PRMan.” 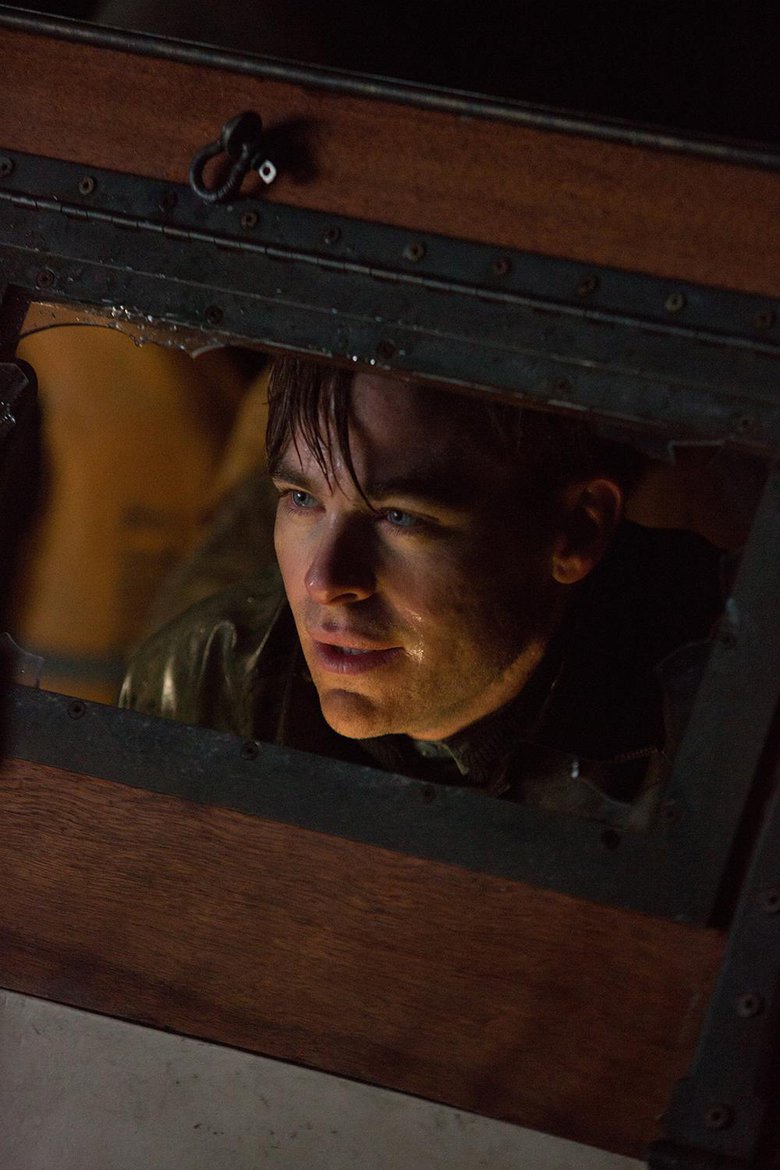 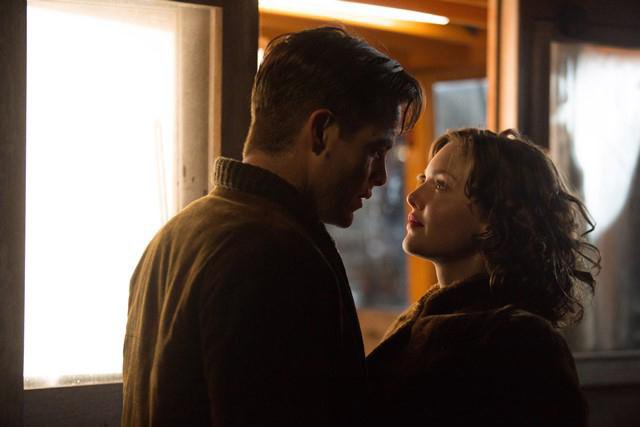 The Crossing the Bar Sequence was the biggest challenge for MPC outside of handling all of the required rendering. "We've put something up on the screen that hasn't been seen before which are these massive crashing waves,” notes Seth Maury. "We spent a lot of time breaking down the essence of a crashing wave. How the lip curls at the top, how wave breaks apart depending on how strong the wind is, what the quality of the water is when it hits the bottom of the water so it's curling over, the different colours in there, and the quality of the deep depending on how strong the key light is.” 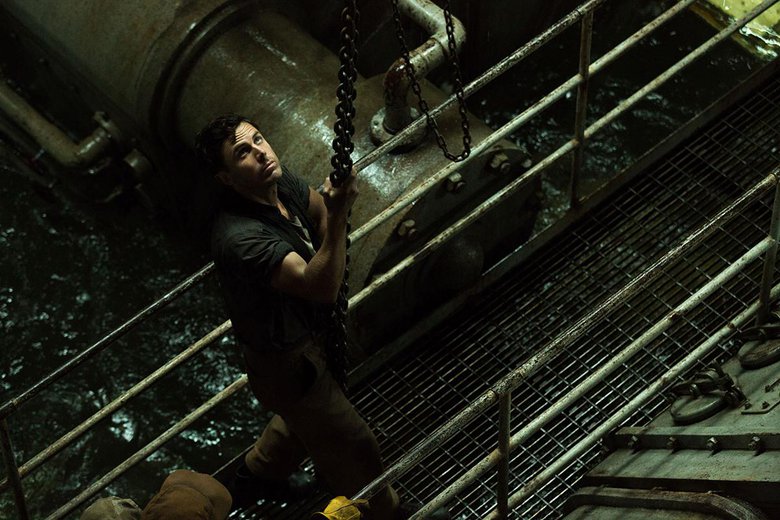