by Kate Pfeilschiefter on 21st November 2017 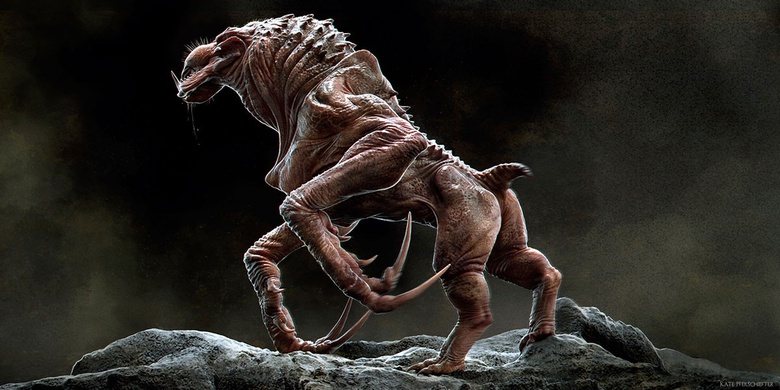 A creature created in ZBrush and Keyshot combining much of the advice to be discussed.

In this article I explain five key bits of advice useful for creating compelling and believable monster designs, both for original prompts as well as old mythological staples. What makes a monster and what makes a creature, an animal or an alien requires the same basic knowledge applicable to a wide range of genres and subject matter.

Monsters, creatures, animals, and anything biological in general become easier to create when you study the similarities shared by our basic anatomy. For example a vertebrate on earth may lose digits or limbs but will never (unless a mishap like fusing with a twin during development or genetic defect is involved) have more than 5 digits on a hand or foot, or more than 4 limbs (if you don't count the head or tail). A human, a horse, a lizard and a dog all have the same basic bones to work with. Though those bones may warp in size and shape, or fuse together, or become vestigial, all life along the vertebrate tree tends to share the same basic body plan.

These are rules we will readily break when creating crazy critters but it's useful to understand why the natural world works this way first. When you realize the muscles in the limb of one animal you can draw fairly well are actually very similar to something you have difficulty with it becomes easier to translate that skill from subject to subject. 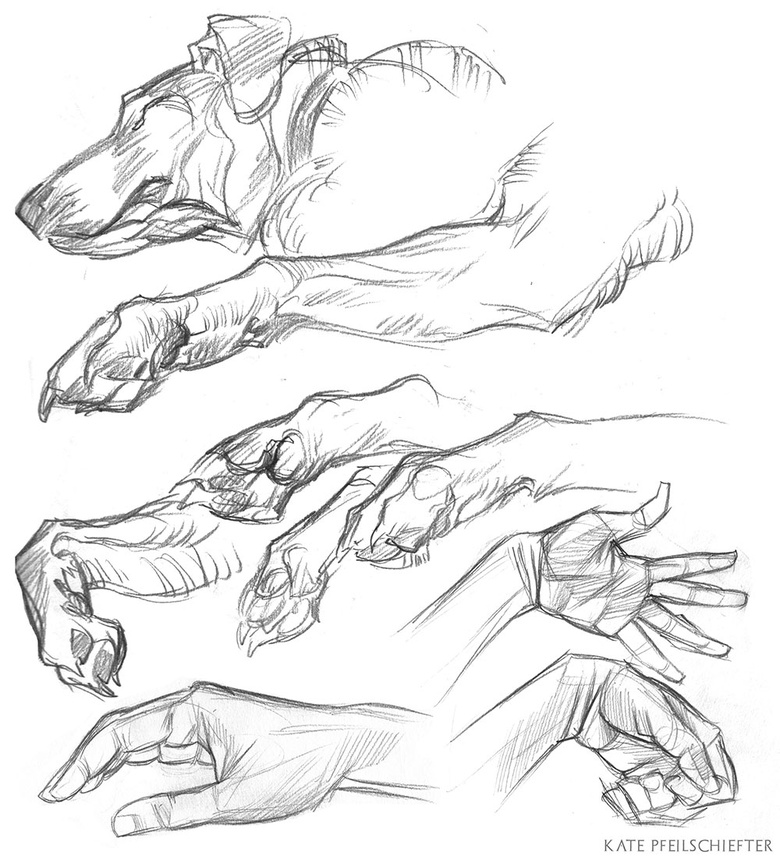 An example of studying anatomical differences from life. Though at first glance appearing very different, the underlying bone structure of a dog's fore-paw and human hand is still much the same. In the dog paw the phalanges are reduced, the metacarpals extended and the thumb is a short dewclaw.

Whenever you're stuck on a design or find yourself repeatedly using the same shapes or proportions try and expose yourself to new and unusual creatures to break out of bad habits. The real world is always more bizarre, weirder and wilder than our imaginations allow for, expand your visual library and stretch your imagination by researching real animals, living and extinct, large as whales or as small as dust mites.

Vary up the ratio in which you use reference, consider picking one creature for a general body type and proportions, another for surface treatments, scales, spikes, fat tissue, horns, and a third for small tertiary detail scattered throughout. Keep a lookout for new creatures and reference. Watching wildlife documentaries, following palaeontological finds, or researching microbiology are all rewarding ways of finding new sources of inspiration.

Various calculations estimate 8.7 million to 1 trillion species of animal life on the planet if you include both macro and micro level organisms, that's a lot of reference material to go through. Have you heard of the colugo, sarcastic fringehead, glyptodont or toad-headed agama? Either way, go look them up! 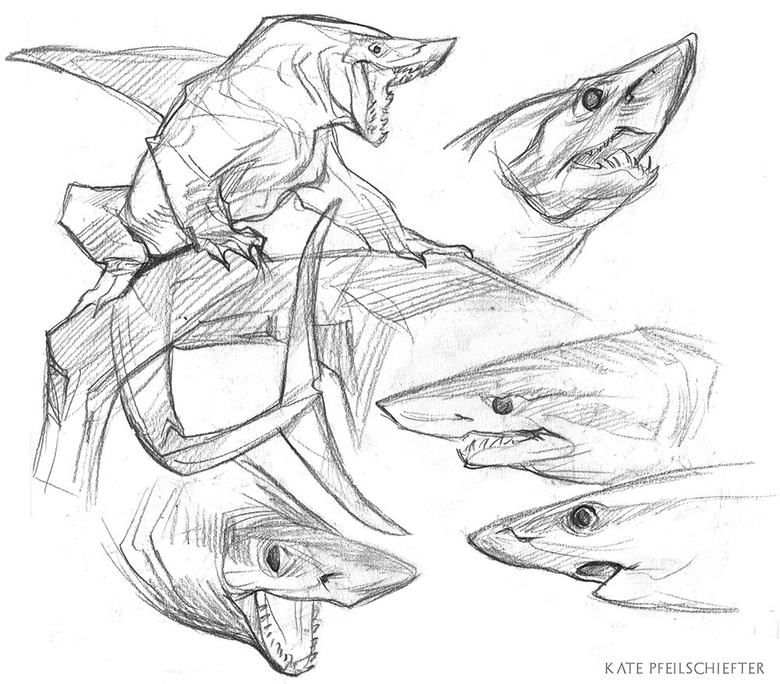 Reference informs design as well as personality. Always do research on even relatively familiar animals to aid in posing or expression.

Perhaps after watching a dolphin leap from the water or a squirrel scamper up a tree you'll notice how suitably streamlined the dolphin is for swimming, or how the squirrel's tail aids in balancing on branches. It's useful to think about why animals look the way they do, and how their appearance is driven by their habitat and lifestyle. Incorporating traits associated with a desired ecological niche will help your design read without having to verbally tell someone what it is or what it does. This leads to more successful cohesive designs as a whole, your monster will feel more real to the viewer even if they themselves don't necessarily know why.

Be conscious of the reference you're using, if it's a climbing creature but all you're looking at is fish no one but you will understand it's arboreal. It's good to grab reference from a wide variety of animals but consider how that reference might change the read of your creature, putting a dorsal fin or a prehensile tail on something without any other obvious aquatic or climbing traits often feels tacked on. In nature animals rarely devote energy to growing features that don't directly contribute to their survival in some way, if your monster otherwise does zero swimming there really is no reason for it to have that fin. 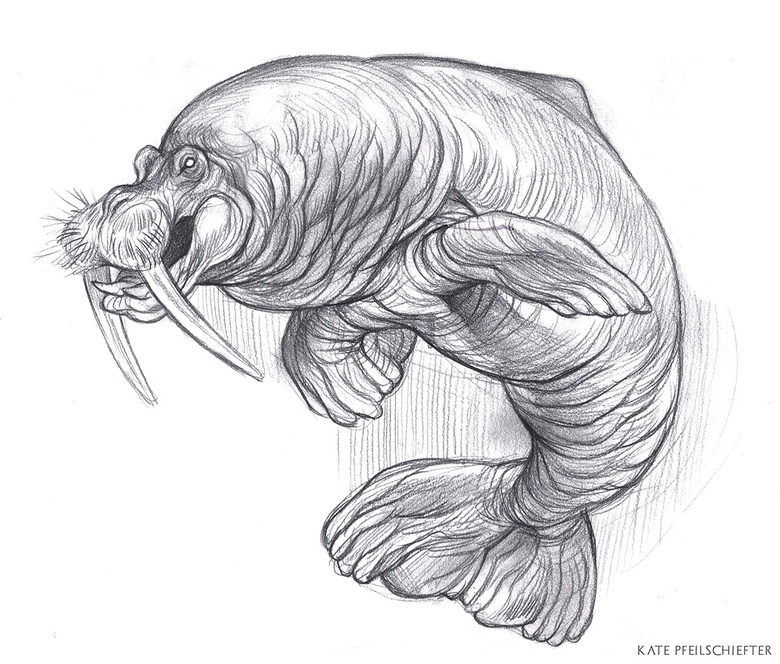 An exercise in combining traits from different species with similar aquatic lifestyles. The manatee, hippo and walrus are all rotund amphibious or fully aquatic mammals with thick skin and heavy body fat.

Every good design has a focal point, some element unique to it that makes it stand out from other creatures. A tiger has stripes, an elephant makes an impressive display with its tusks and large ears, a tyrannosaurus or crocodile is all about bite force, a giraffe is a neck on stilts, and so on. Once you find that special attribute integrate it throughout the body, have callbacks to your creature's main design trait to form natural looking cohesion throughout.

If its main feature is huge spikes on the shoulders try using proportions that lead the eye to it, or perhaps multiple smaller spikes scattered throughout the body leading up to the main event. Rhinoceros have their horns but also thick skin to help complete the tank look, the tyrannosaurus' arms are essentially useless because it's dumped all its power points into the maw, and those scrawny limbs tell you that the mouth is all that matters. Whatever the main event of your monster is, reinforce it with supplementary proportions or supporting detail that mimics the focal point. 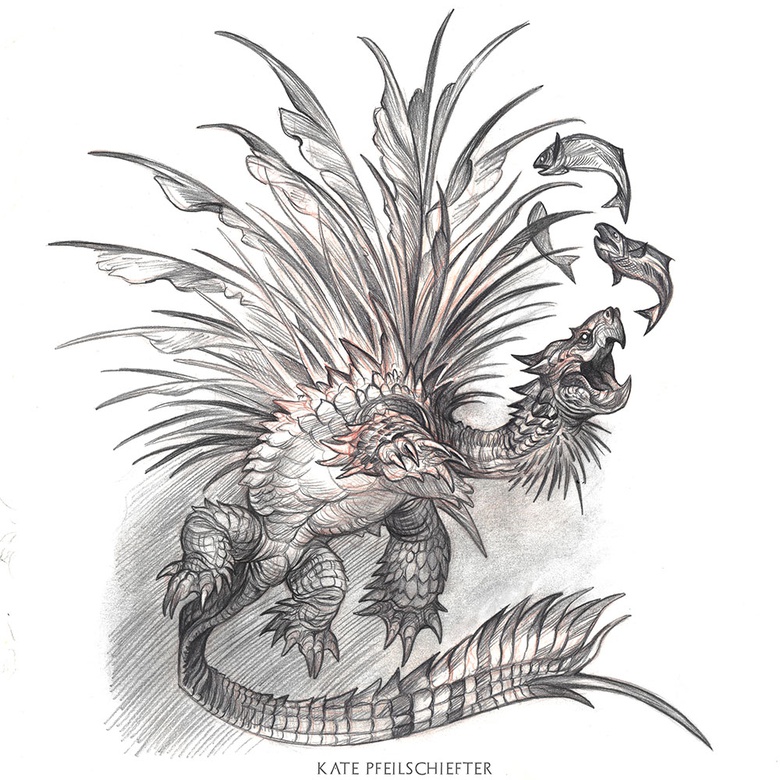 The peluda is a mythical french dragon whose primary weapon is a set of shaggy projectile spines, a very obvious focal point for a creature design. I reinterpreted them to be more like spiny venomous lionfish quills, forming a sort of pseudo-shell on a snapping turtle based body. The spine detail is reinforced elsewhere on the throat sac and on the tail.

Many stories of dragons, unicorns, manticore, werewolves, sea serpents and sasquatch can be traced back to real animals. Travelers visiting Africa for the first time, and then returning home and trying to find the words to describe a rhinoceros are very likely why we have unicorns. The tiger's rumored predilection for man eating likely spawned the manticore, and many historical tales of dragons sound a lot like crocodiles, large snakes or even turtles. For example someone seeing a giraffe for the first time might write of it as having the head and neck of a snake, body of a leopard, and feet of a stag, and from this we get something like the questing beast.

The lesson being people often use animals they're familiar with to describe new creatures they've never seen before, which is why it's easier to create new creatures by combining traits from real ones. To make a more compelling design however you don't want to leave your monster in this fractured chopped up state with the head of X and body of Y. You want to smooth out the edges so to speak of where that snake's neck ends and the leopard's body begins. A giraffe after all doesn't just have spots on the body, their necks and legs are also spotted, and the neck isn't the only part of them that's tall. Imagine yourself trying to describe your monster to someone who's never seen it before, use that list of familiar creatures to think of reference sources and pt them in the blender. 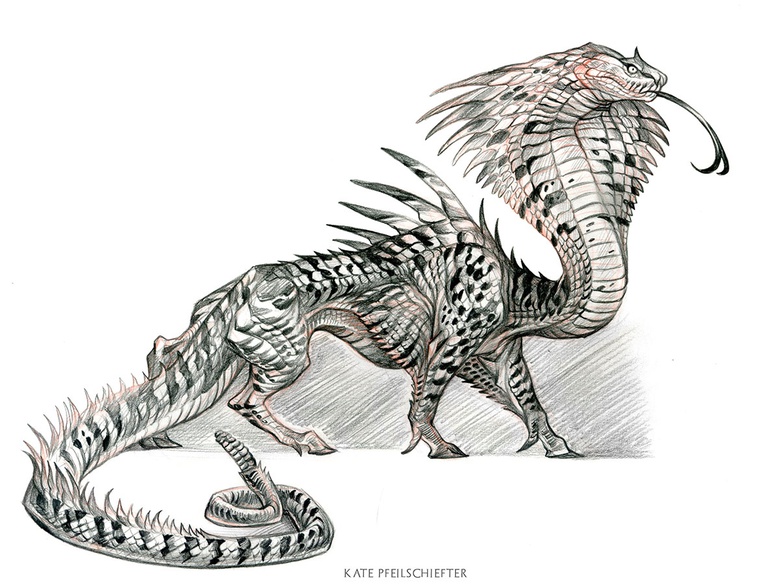 The questing beast from Arthurian legend twists the giraffe into a serpentine predator. I used rattlesnakes, cobras, vipers, leopards, caribou and iguanas for reference. Certain features, like the long scales on the hood are repeated throughout the body, the stretchy skin forming the hood also shows up again creating a cape that runs from the forearms to the torso.

I hope you found some of the information above new or useful. As usual the key to monsters and creatures is the study of anatomy and a drive to familiarize yourself with the natural world. If you research the rules and constraints real animals have evolved with it will inform your design choices when creating your own believable and terrifying beasts.