V-Ray 3.0 packs a punch with its real-time rendering capabilities. Paul Hatton takes a look at V-Ray RT and reveals how to make the most of it for test renders andimproved efficiency 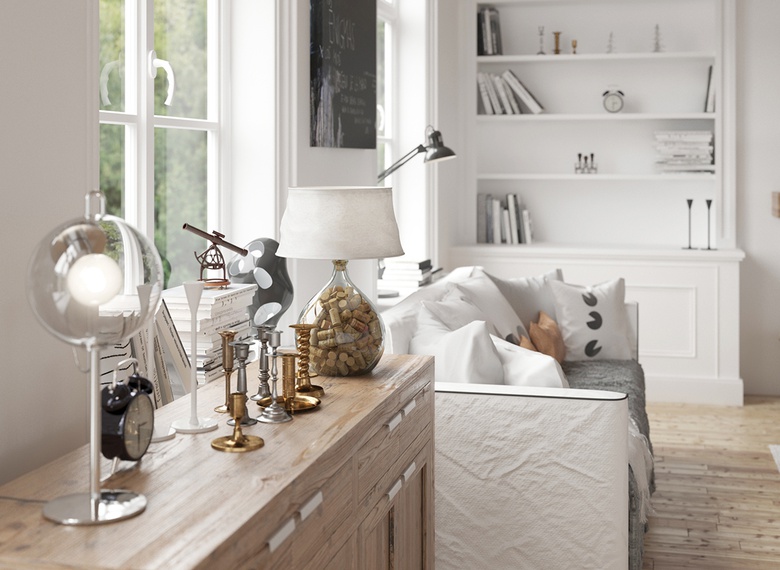 This will be our scene for the whole of this series of tutorials. We'll use aspects of this scene to look at the various new V-Ray 3.0 features.

V-Ray 3.0 packs a punch with its real-time rendering capabilities. Paul Hatton takes a look at V-Ray RT and reveals how to make the most of it for test renders and
improved efficiency

V-Ray 3.0 offers us two primary options for real-time rendering: V-Ray RT and Progressive. Hit render and your image will become increasingly ‘complete' in front of your eyes. Obviously the more complex the light and materials the longer this will take to become acceptable, but it's fantastic for test renders where you want to get an idea of light levels, or light direction, or how your camera angles look.

It's important to note that, as graphics cards become even more powerful, it is becoming increasingly viable to render ‘production' quality visuals using this technique. In this article, we'll take a look at V-Ray RT in V-Ray 3.0 to see how we can make the most of it.

V-Ray RT has been around for quite a while now and it has been adopted in varying degrees by different artists and studios. It's really exciting to know that it is only a matter of time before it becomes completely viable to use real-time rendering techniques in every area of production and thereby removing the requirement for a production-only version. How long this will be I don't know, but if the improvements in the last few years are anything to go by then it won't be too many more years before it becomes a reality.

V-Ray RT is split into two versions, namely a version to run on the GPU and a version to run on the CPU. The version you use will depend primarily on how your GPU stacks up against your CPU. To change to V-Ray RT you need to go to Render Setup and the Assign Renderer rollout. Under ActiveShade rendering, set it to V-Ray RT. With that done, click on the arrow at the bottom right of the render setup and select Active Shade Mode. Then on the V-Ray RT tab you can set the engine type to either CPU, or one of two GPU options: OpenCL or CUDA.

You'll have noticed that V-Ray in the Engine Type dropdown gives you the option between OpenCL and CUDA. If you're new to the graphics card world then you may wonder what these even mean. Both of these are graphics cards platforms. CUDA was created by NVIDIA and is implemented on their cards. OpenCL is an open framework utilized by AMD. Whatever graphics card you've got, find out which framework it implements and select that from the dropdown.

Why use V-Ray RT CPU?

The main reason for using the CPU version is quite simply that it supports a ton more features than its GPU counterpart. The limitations for the CPU are really quite minimal and therefore moving a scene over from the production renderer to the RT CPU rendering is unlikely to cause too many problems if any at all. In the V-Ray 3.0 version the CPU now supports Hair Farm, Ornatrix hair, subsurface scattering and V-RayClipper objects! Very impressive. There is a full list of supported features on the V-Ray website. 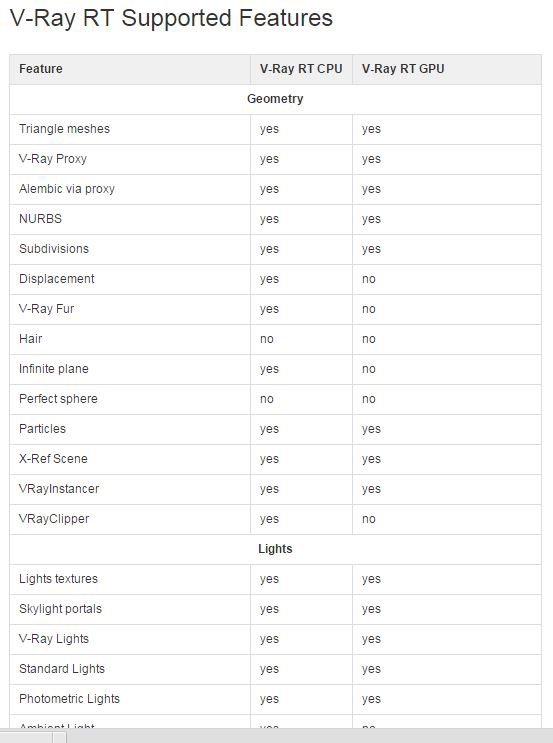 Why use V-Ray RT GPU?

Even though there is a more limited subset of implemented features for V-Ray RT GPU it doesn't mean that it's useless. It's possible to get much faster results rendering on the GPU compared to the CPU. Graphics cards are improving at a much quicker rate than CPUs and they are set to continue to do so. Graphics cards can also more easily be stacked to deliver even more power to your fingertips. V-Ray is also increasing the compatible features with every release, so it's only a matter of time before everything is supported.

Graphics cards are improving year on year with some very exciting developments in the pipeline of the major players.

What GPU should I get?

Tough question! If money is not an issue than something like the Titan X might be interesting for you. It's got 12GB of memory and would serve you incredibly well. AMD also has the Radeon R9 290X which should serve you just as well. If money is a little tighter but you're still serious about rendering on the GPU then NVIDIA is bringing out the GTX 980 Ti. This will be released at a more reasonable price point than the Titan X, but it only packs 6GB of memory. As with all these things, it comes down to money and your preference between NVIDIA and AMD, or other providers. 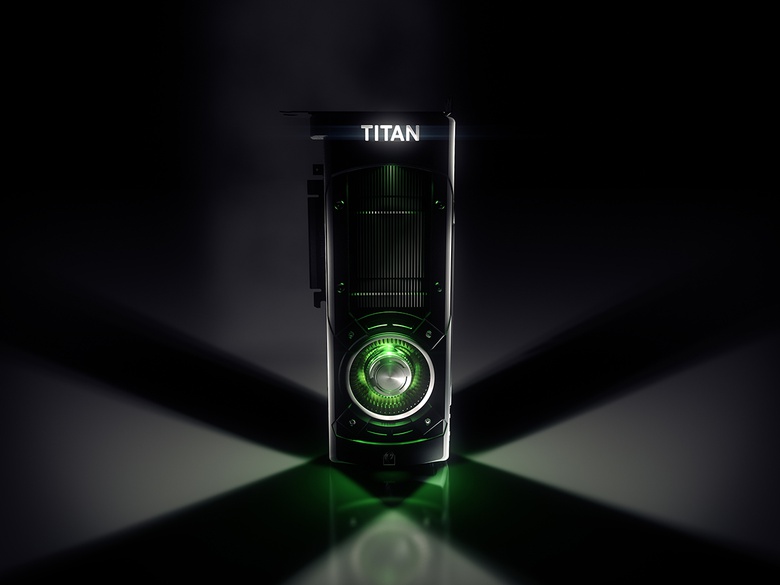 The NVIDIA Titan X is an exciting development in the world of computer graphics cards. Image courtesy of NVIDIA

Let's move onto some of the settings that V-Ray gives us to control our RT rendering. Firstly, we have a couple of settings that let us control the depth of trace and GI. According to V-Ray the trace depth ‘represents the maximum number of bounces that will be computer for reflections and refractions'. The GI depth on the other hand specifies ‘the number of bounces for indirect illumination'. Obviously the higher these numbers are the longer the render will take to calculate because more rays have to be calculated. 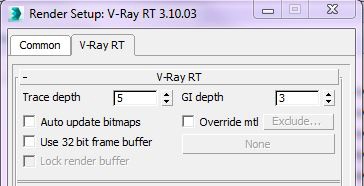 According to V-Ray ‘This controls the number of rays that are sent to the V-Ray RT render servers for processing.' It's not recommended to increase this beyond 512 and please remember that this is not the exact amount of rays, but proportional to it. The important thing here is in reference to distributed rendering. The smaller the number the more times that the client will need to communicate with the server. This could slow the rendering down. This is the same principal as with bucket sizes and distributed rendering.

V-Ray helpfully gives us the ability to control some of the features that are rendering when using V-Ray RT. These controls enable us to avoid rendering things like displacement and motion blur if we want to get a quicker result. Simple tick the check boxes for the features that you want to be rendered.

V-Ray 3.0 not only includes a new VRaySkinMtl shader with multi-layered subsurface scattering and reflections but you can also render the VRayFastSSS2 using VRay RT. Even the more complex and less-used features are becoming available in real-time, and this is a big plus. The sub surface scattering (SSS) material is brilliant, partly because it's fast (obviously, the name gives that away) but also because there are a set of presets which you can use as a starting point. There is even a ketchup preset! Utilize this material for skin, wax, marble and other similar materials. 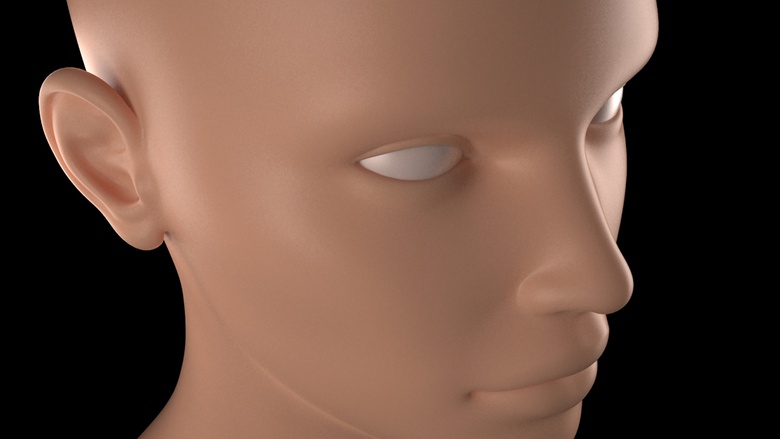 To wrap it up

I would highly recommend exploring the world of GPU rendering because it gives you an added dimension of flexibility when you are working through iterations of materials, lighting, and camera angles. And if your graphics card is super-powerful then you may find that you're able to utilize it on production renders. Some of the settings can seem a bit daunting but once you get your head around them, it's not all that scary.

The next generation of graphics cards by both AMD and NVIDIA are likely to be able to stack memory on top of each other. This is a game-changer as it'll allow for access to an incredible amount of memory all on one card. It looks like NVIDIA will do this with a card codenamed Pascal, likely to be released in 2016.

The last few years have seen a rapid expansion of GPU renderers hitting the market including Octane, Furry Ball and Arion. Free trials will help you explore which one is right for you.