This tutorial is designed to show most of the UV mapping techniques and tricks that I use day-in, day-out. This is more of a brief case study rather than a step by step tutorial, but it will give you, the viewer, an idea of the work flow I use when UV mapping something tricky like a human skull. I hope you'll enjoy it and learn something.

We will begin with a look at the model itself (Fig.01). It's always good to unwrap UVs on an object that is not too detailed, because it can get difficult to edit quickly. I am going to be using UVLayout which automatically smoothes and unwraps a model's UVs, and it can become very slow if there are thousands of polygons to unwrap. The model
is split into three parts; I decided not to have the mandible as a separate object from the rest of the skull because it can be easily split up in UVLayout. The teeth, though, are separate, because they will make a lot of UV shells and its best to have them separate from everything else. 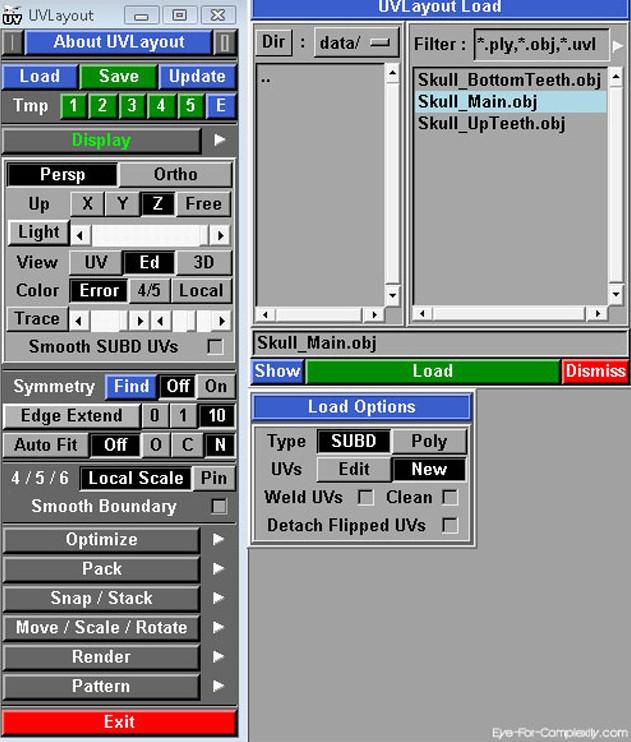 The next thing to do if the object is symmetrical is to tell UVLayout to find its symmetry; this helps a lot because it mirrors over any cuts you make to one side, and when it unwraps the shells it makes both sides match. This can be seen in Fig.03; I have also split up the mandible and main skull object.

In Fig.04 I have spent a little time cutting up the model into chunks that can be easily unwrapped; the trickiest area was around the side of the skull. It can sometimes take a while to get these things right, there was a lot of back and forth with cutting up parts and seeing if it unwraps well, and if it didn't unwrap well then I made adjustments and unwrapped again, etc. 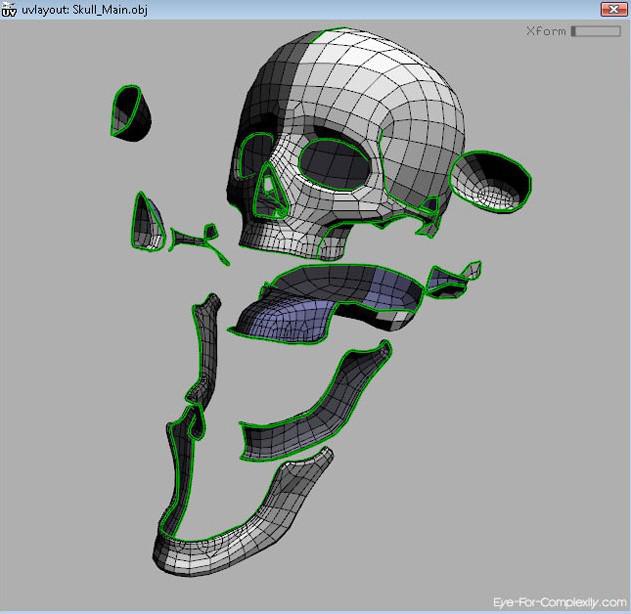 Fig.05 shows the process UVLayout goes through as it unwraps the UV shell. It can sometimes take a few minutes, depending on the polygon count of the object. You can see that I let it calculate a little too long, and there are overlapping UVs near the face of the skull - I'll fix this later on. Also notice that with symmetry on the UVs are
identical on each side.

It didn't take too long to unwrap the rest of the shells. You can see in Fig.06 that in some of the UVs there are some areas of blue or red; this means that areas with red aren't getting an equal amount of UV space in comparison with all the others UVs, blue means the polygons are getting too much UV space, and green, of course, means the polygons are getting the right amount of UV space. 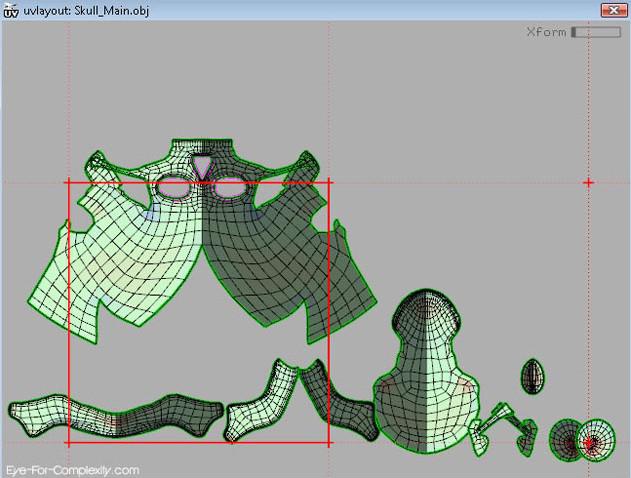 In Fig.07 I have imported the UVs back into Maya and applied a UV Display texture to it. This allows me to easily see on the model if there is any pinching of the UVs, or any areas of 'weirdness'.

There are some areas that need adjusting on the mandible. I mainly use UVLayout as a tool to make UV shells; I do all my relaxing and adjusting back in Maya. This is shown in Fig.08 - 10. My technique for relaxing UVs in Maya is to use the Unfold UVs tool. I've found the best way to use this tool is too use its Unfold Constraints function. This means that when I relax the UVs, it only allows them to move either vertically or horizontally. When I use this tool without Unfold Constraints, I sometimes get undesired effects. I unfold vertically and then unfold horizontally. 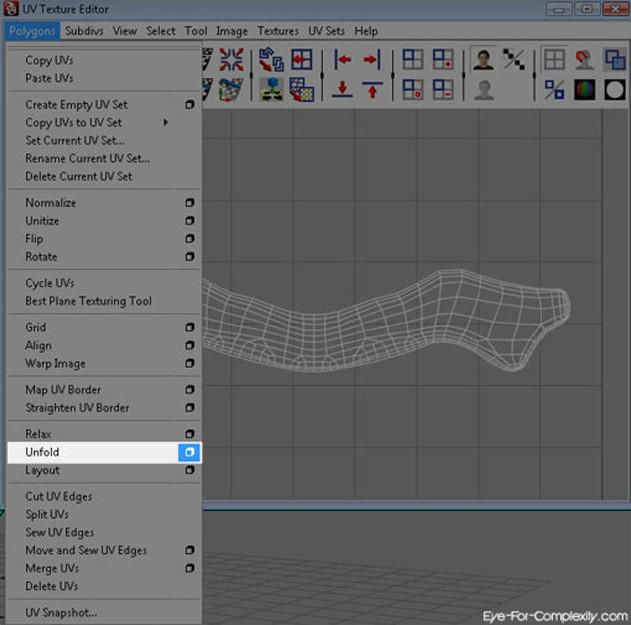 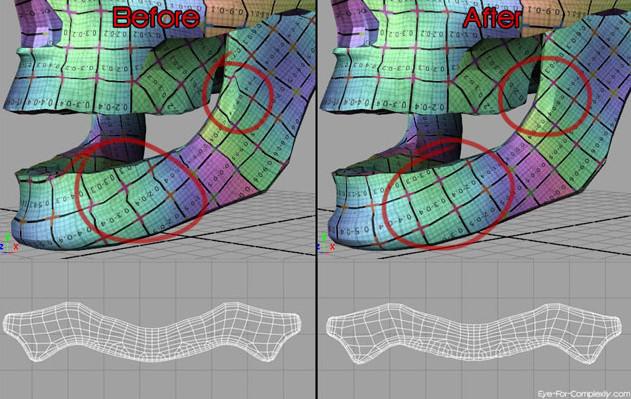 As you can see in Fig.10, the Unfold UVs tool has performed perfectly at eliminating any UV 'weirdness' on the mandible.
The next places to fix are the orbital sockets, shown in Fig.11. Areas like this can be very tricky to unwrap if only a single planar projection is used. I found the best way to improve upon this area was to use two planar projections on the Y-axis. 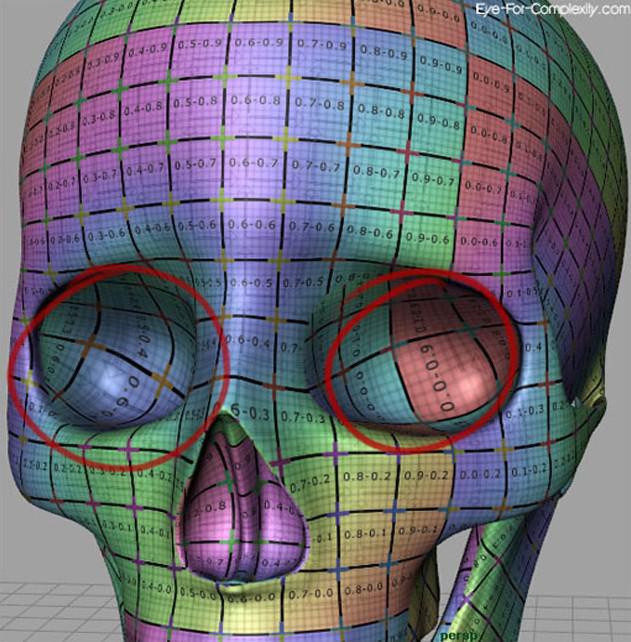 Fig.12 shows what I mean, it effectively turns UV-ing a bowl shape into UV-ing something less rounded, which will have less distortions. For some shapes, though, it's just not possible to get an absolutely perfect UV space distribution without lots of seams. 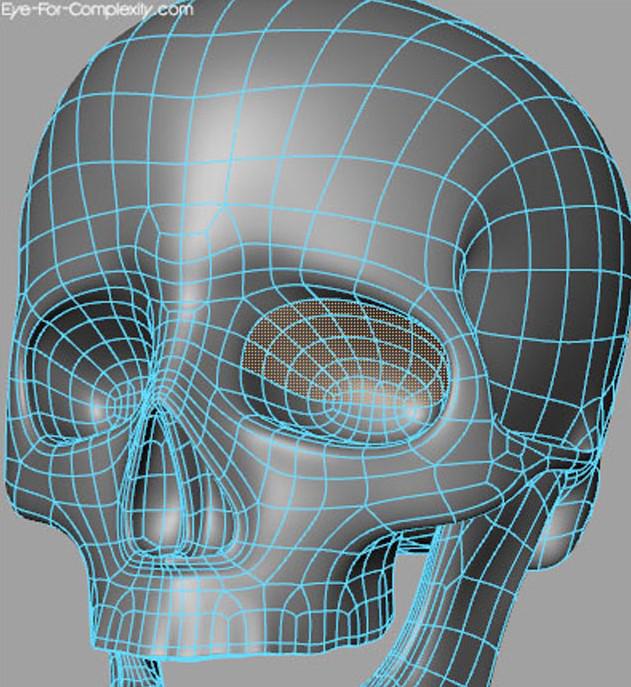 As you can see in Fig.13, I welded together part of the seams on the orbital sockets, this makes it a little easier to texture if only Photoshop is being used, but luckily these days 3D projection painting in applications like BodyPaint are used to paint over seams. I also like to make the UVs resemble the model as much as possible; this makes it so much easier to make textures for it.

As you can see, the UVs for the orbital sockets have been improved quite a bit (Fig.14). We're almost done now with the general editing and relaxing of all the shells; I went through all of them and used the Unfold UVs tool. I needed to quickly put it back into UVLayout and edit the main skull UV shell with the overlapping parts (Fig.15). 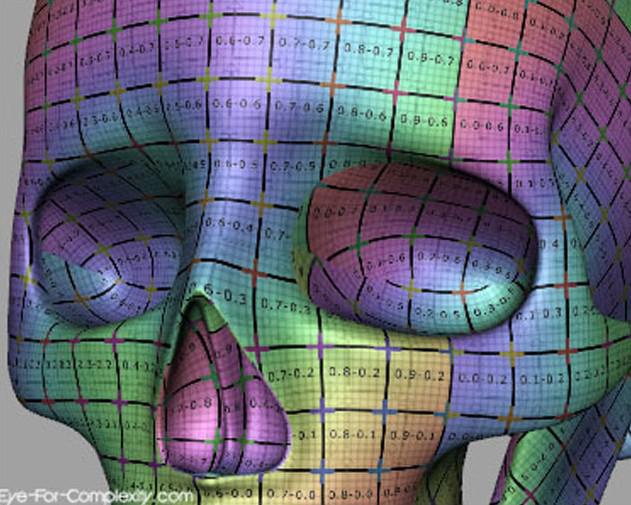 It normally doesn't take me long to make these adjustments. After a lot of practice at UV-ing things, I get an idea in my head of what probably needs to be done to fix any issues - there isn't really a huge variation of UV problems, and if you can fix one thing it's pretty easy to fix another.

Now, the final step is to arrange all the UV shells into the UV grid so that they can be exported and the texturing can begin. Maya has a fantastic tool called the Layout tool. This takes the UVs of an object or many objects and arranges them in a tidy way (Fig.16). It also scales all the shells in relation to each other. This is important because it means the UVs for the orbital sockets won't get more UV space than the mandible - everything gets an equal amount of UV space for its size in the3D world.

The layout tool did a great job of scaling everything and making it fit within the UV grid, but doesn't always arrange the shells in a good way for texturing. I always go in afterwards and arrange them the way I want; this makes texturing easier if everything is arranged in a logical manner (Fig.17). I also added the teeth UVs to this, as well. They were very simple to unwrap; I simply put them into UVLayout all as one object, and then split them up. I gave them quite a bit of UV space for their size, in relation to the rest of the model. Teeth are something that people like to make detailed, so it's good to provide them with enough UV space. 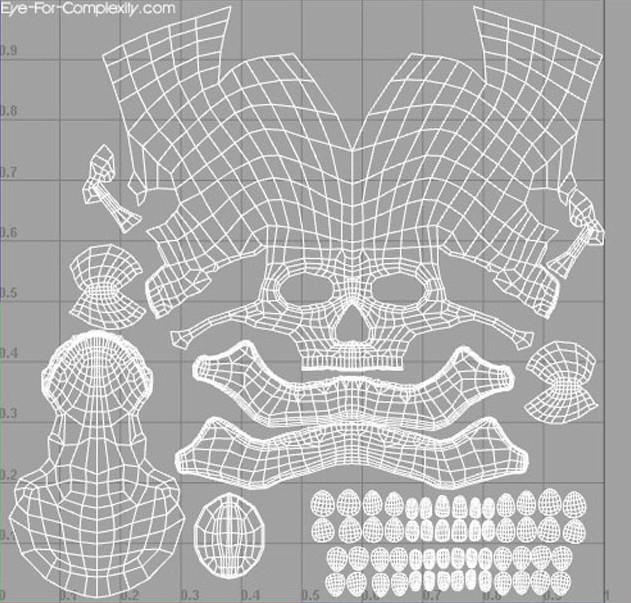 I hope you have learnt something from this tutorial. If you have any questions about this tutorial, please don't hesitate to email me at:. Thanks for reading!