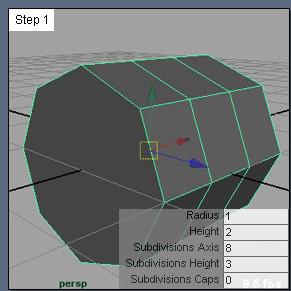 Rotate it 90 degrees in the Z axis. 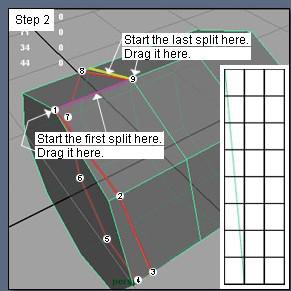 Enter the Modeling menu set and go to Edit > Polygons Split Polygon Tool > Option Box. Hit the Reset Tool button and set Number of Magnets to 7 and the Magnet Tolerance to 100.

Now let's start splitting. Start at the top left edge and snap to the left end of the cylinder. Continue splitting around the cylinder one step at a time. The split should be evenly distributed from the first split to the last. To avoid any issues with the first and last split you'll have to start it on the edge indicated with purple and end it on the edge indicated with yellow like in the illustration to the right. The illustration also shows how the line should look if the cylinder where to be flat. 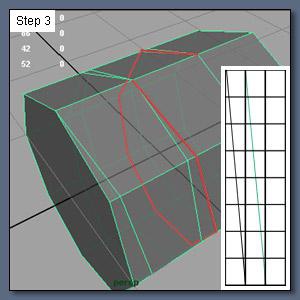 Split the next segment of the cylinder in the same manner as the last step. 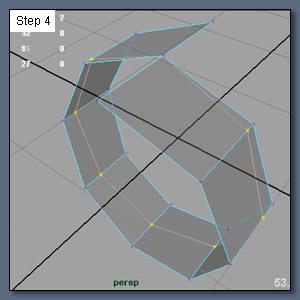 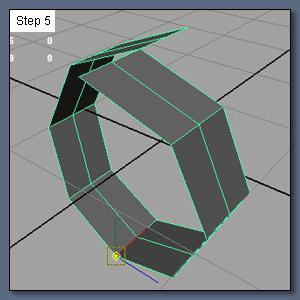 With your object selected, go to the Option box for the Split Polygon Tool. Set the Number Of Magnets to 1 and make a split down the middle of the mesh.
This could also have been done using the Edgeloop Split in MJ Poly Tools or any similar plugin. Move the object's pivot point to the bottom left vertex. (Push the Insert key on your keyboard, press and hold v while moving to point snap to the vertex. 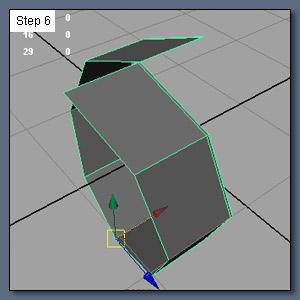 Move the edge you have split in step 5 close to the right edge. Set this to the width you want the crease to be. 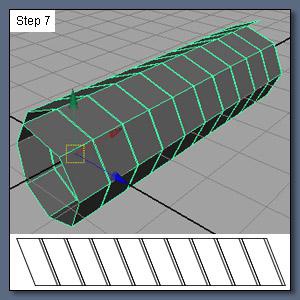 Now I Duplicated the object and point snapped them 9 times in the x axis. The number of duplicates depends on how long you want your object to be. Then select all of the objects and Combine them. Then Merge all the vertices in the new object. You will have something like this. 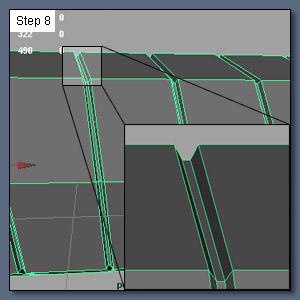 Select all of the big faces. The easiest way to do that might be with MJ Poly Tools, but either way is fine.

(howToMJ: Select the edge indicated with a purple color in step 2, choose Select Ring from the MJ Poly Tools menu, ctrl+f11 to Convert Selection to Faces.)

Extrude them out from the object with Keep Faces Together set to On. I also decided to scale them a bit in the x axis to make a more rounded, beveled and softer looking shape. The creases should now something like in the image. 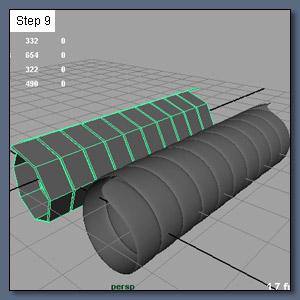 Now you can smooth it and voila! There are of course more things to to with this shape, but now you have the basic shape you can use as a grip of a sword, or a tennis racket. And if you extrude the thinnest polygons you will end up with something that could be used for some kind of tube. But that part I'll leave to you to decide.

If you are interested; here is a zip'ed scene-file used in the tutorial. You can download WinZip from winzip.com to unpack it. Enjoy! :)

A 4.48min video tutorial for this tutorial is available in Microsoft Video 1 codec. It's a 5.38MB download in Rar format. Go to rarlabs.com and download WinRAR to unpack it.

Extra: For the bat I have used the object from the tutorial. I just added a Flare deformer to it to make it thinner in the middle. The screws are made using the same procedure as the tutorial. It's only a matter of how you place the lines. Have a nice day!