This tutorial will go through the making of an illustration for a book project called “Apocalina.” I will be working in Photoshop CC, using a Wacom Cintiq 27” HD Touch tablet. We are going to explore how to build emotion and mood in an illustration, how valuable the input from a critique group can be and how to fix mistakes when you think you’re done with an illustration.

I start out with a detailed sketch of how I envision the final image will look. I build my sketches up in three layers. First a little rough messy layer that’s basically a thumbnail, this layer only has the major shapes. Then I add a new layer where I begin to detail out the major shapes, finally I do a third layer where I detail the sketch out fully. Every time I add a new layer, I drop the previous layer down to 20% opacity. 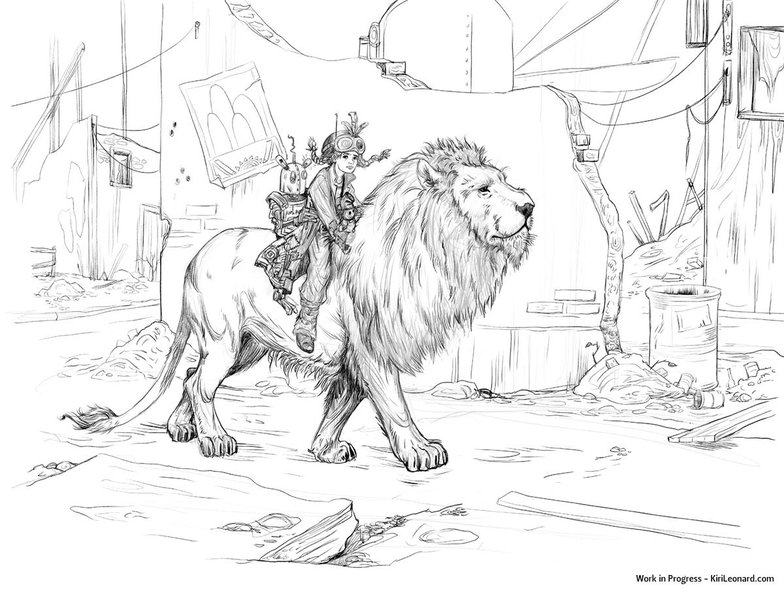 The final sketch has fainter light grey lines from the two previous stages underneath. I like how they add a bit of value to the drawing, like when you smudge your pencil lines on paper

Once I have the sketch down, it is time to decide on the color scheme. I want to explore a couple of different options here. I know my setting is post-apocalyptic, so I won’t be using any brilliant greens for the surroundings. I also know I want the girl to be my main focal point, with the lion coming in second.

My first idea is a night scene, the blue separates the lion nicely from the surroundings, but I always tend to go for blue, so I want to try something else. Next, I explore what a day scene might look like, it’s straight forward. After that I try out a sunset scene, which I like but I’m concerned it brings too much attention to the brilliant tones of the background so finally I try a much muted, bleak, end of the world color scheme. This fits what I am looking. 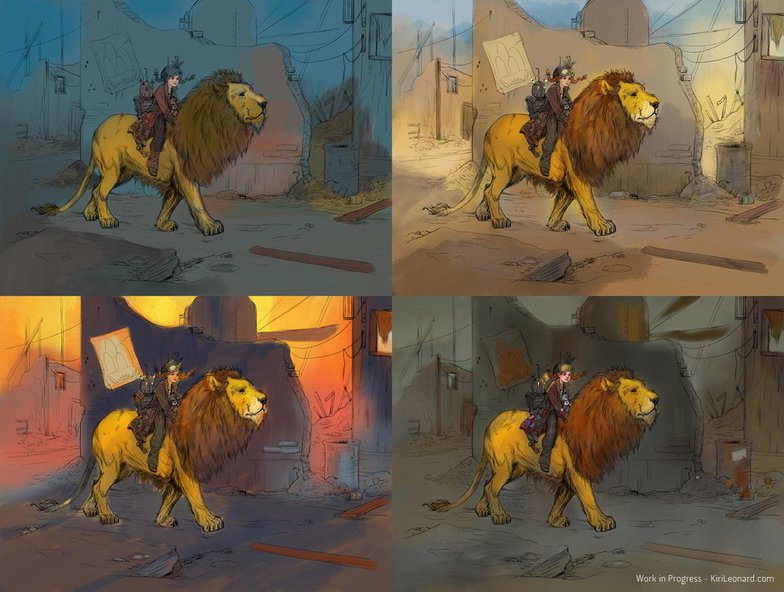 Color compositions are a great way to see what different directions you can take your illustration in. They don’t have to be detailed so you can just play around and explore

Now I begin blocking in the colors all over the piece and refine some of my background elements and add some more detail. As I am populating the background, ask myself questions about the setting. What is this place she is in? What people might live here? What items would make sense to have littered in a broken world? As I explore the image in this fashion I begin to realize that the background feels a little empty and it needs something more to it. 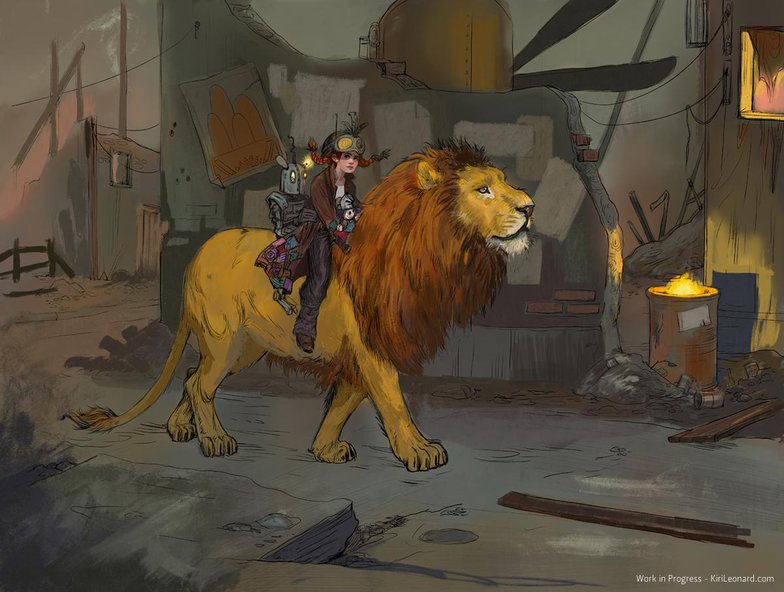 I’m fairly loose and rough with my colors in the beginning of an image. I like to carve away
at an image as I develop it

After asking myself all sorts of questions about the scene, and realizing it felt empty I begin to populate the background with more litter. It’s a destroyed world so it makes sense there would be lots of garbage on the streets. I end up putting quite a few discarded plushies. When I lived in Brooklyn, NY, there was a house that had a pile of old plushies in their yard. It was so whimsical and sad at the same time, and I thought that feeling matched this illustration. As a child I was thoroughly convinced my plushies were alive when I left the room, drawing upon childhood memories like that can be great material for building emotion in illustrations. Perhaps only children have survived in this broken world and they use plushies as protective totems. The setting is starting to have a feeling of entering someone’s hide-out. 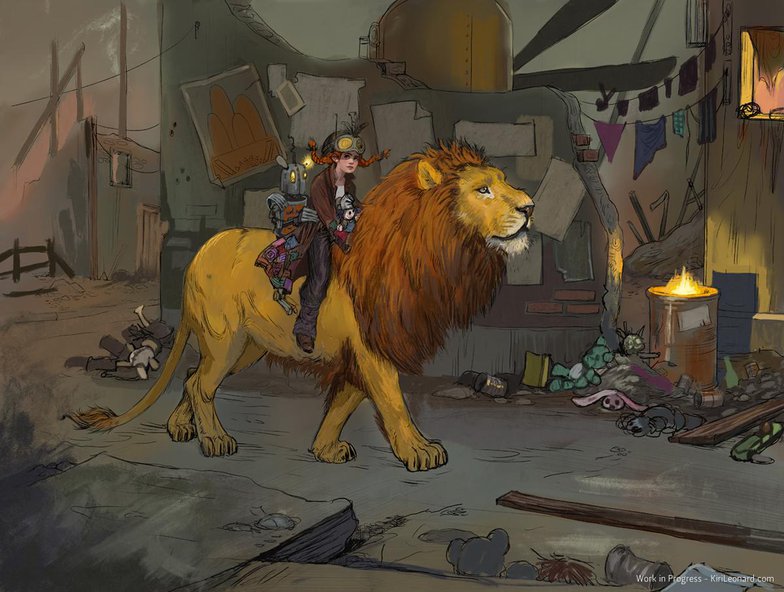 Adding more background objects also allows me to pull more colors into the piece. These colors reflect parts of the main character’s outfit and ties the whole thing together

At this point it’s just a matter of putting in time, and to begin rendering. I begin to add in my light and shadows, as I work on bringing the world to life. I play around with different brushes from Kyle’s Photoshop Brushes and the brushes of Greg Rutkowski to really get some painterly textures going. 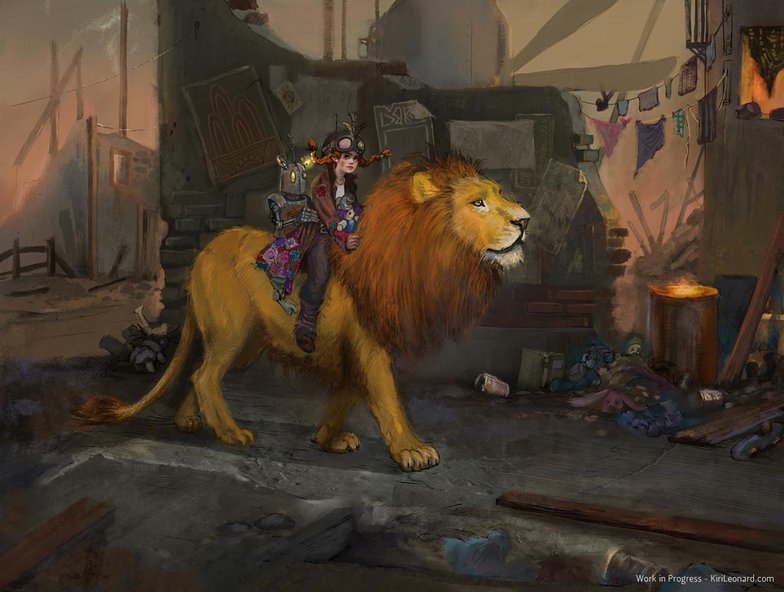 Your most important tool is your foundation training but as you grow, exploring different brushes can really help you get some cool textures going in your artwork

Step 06: The point of no return

I spend a lot of time working on textures and making my colors bleed into one another like they would in a traditional oil painting. At this point I think I am almost done. I’m loving how the hair has turned out on the lion’s mane when suddenly I realize the anatomy on the lion is completely off. He is too short and too stiff, and his paws do not look right.

After a moment of despair, I decide to share the illustration with my critique group. Every artist should have a critique group; a group of fellow artists, where you help each other out with constructive feedback on your art. It’s an invaluable resource. After working on a piece for a long time you can stare yourself blind on the mistakes, getting other eyes on it is so helpful. 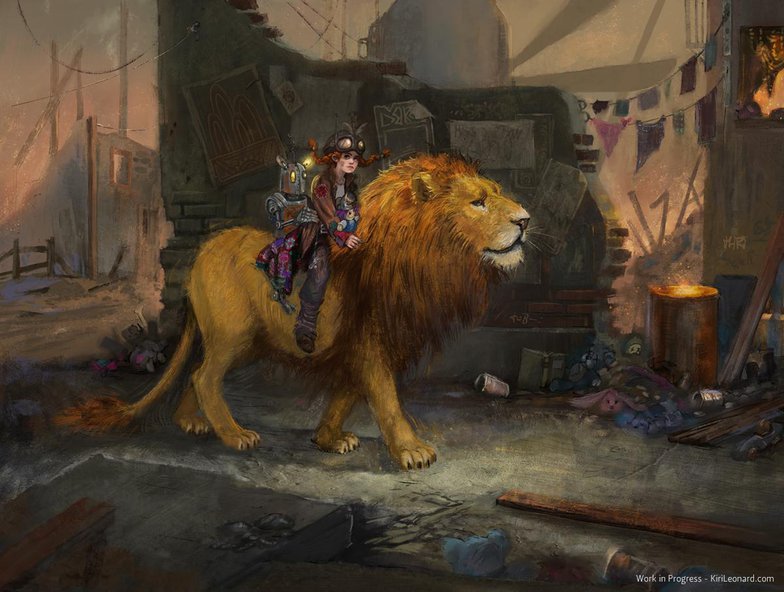 It’s a hard decision when you think an illustration is complete to decide to knock it back to the rough sketch stage and fix apparent issues, but it is always worth it in the end

Step 07: Feedback from my Critique Group

I send my illustration off to my critique group and here are the awesome and very helpful paintovers they return to me. Remember; when you’re given critique you do not have to follow every piece of advice, you can pick and chose from what you agree with. Every artist has their own vision, you should listen to critique but only you can decide if it’s right for your work. 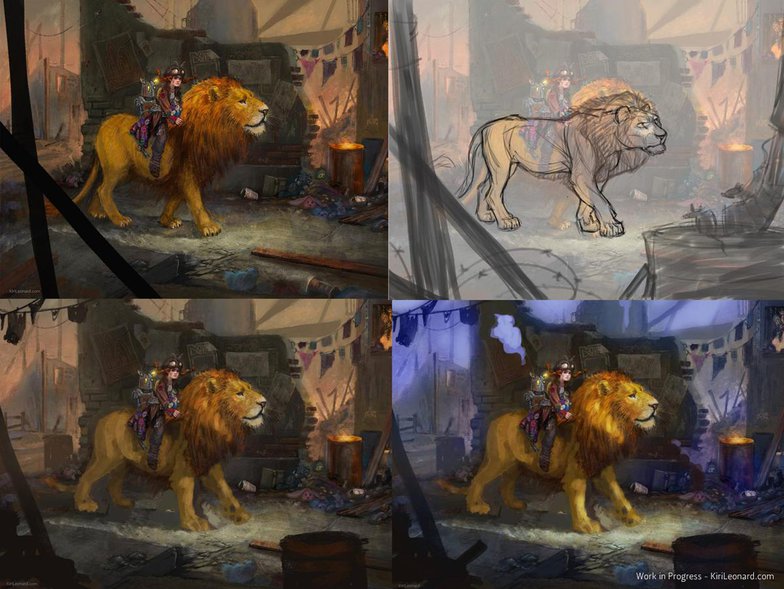 Step 08: Knocking it back

After pouring over the excellent advice from my critique group I set about fixing all the issues. It can be discouraging to have to start parts over but every time I have had to do so in an illustration, the illustration have come out so much better than it was before, so bite the bullet and do it. I redraw the lion, I add in foreground elements, block in colors a new and set about starting the rendering again. 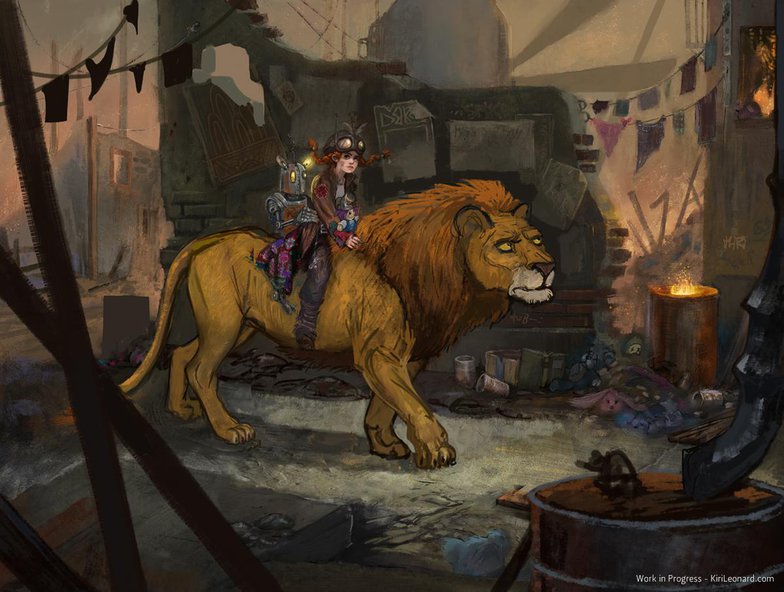 Recreating parts of an image digitally is a lot easier than it would be traditionally; it’s one of
the benefits on working on a computer

This feels familiar. I’m basically back to Step #6 here. I spent a lot of time rendering, blending colors, getting textures back in, refining details and really trying to nail that lion anatomy. I find the foreground elements are adding a lot of depth to the illustration that it was missing before, so I take note of that for future pieces. 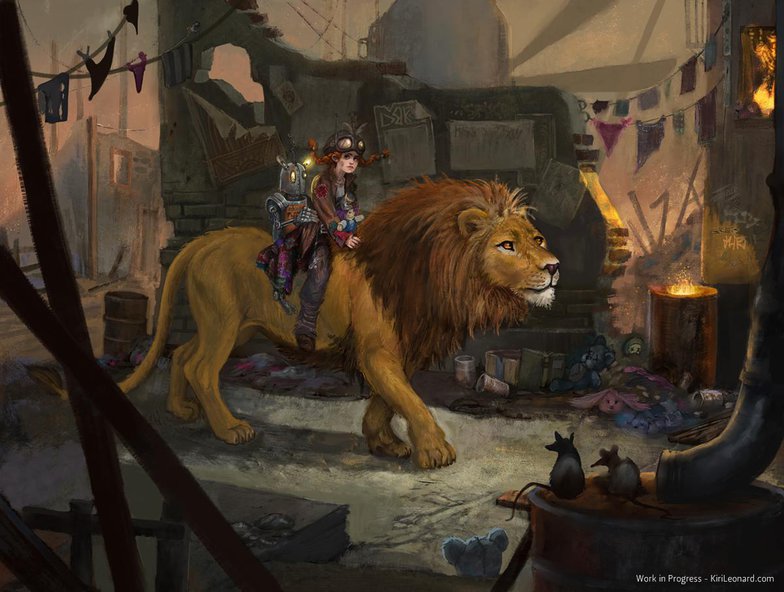 We are getting close to finish again at this stage, there are just a few areas left to give a last once over

The last thing I do is use the color sliders in Photoshop to fine tune my colors and make sure they’re harmonious. I spend a while playing around with the different color options before settling on what I like the most. For the final stage I really try to solidify the mood and make sure I have paid equal attention to textures and details throughout the image. I also do some last-minute adjustments on the lion’s head. I realize the neck was a little too long and the ¾ perspective on the face was a little off. I’m now ready to call it finished! 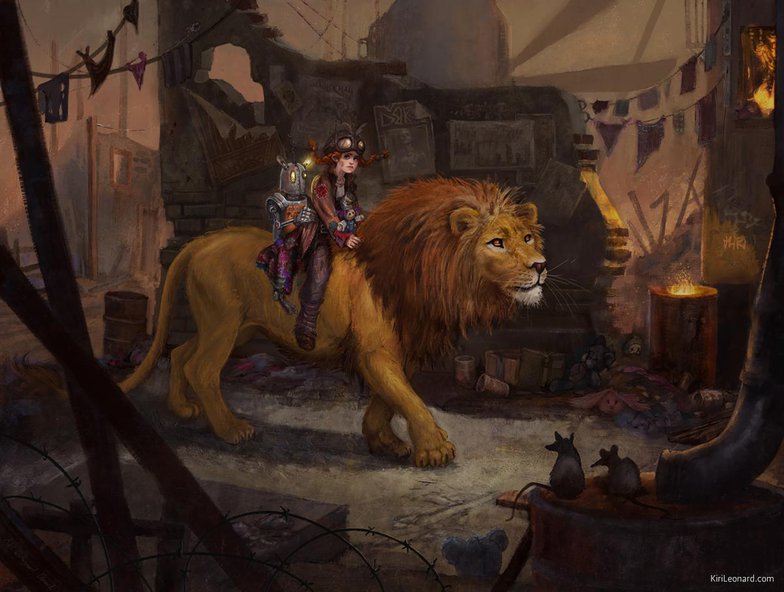 I said it before, but I want to stress it with the final image, when you go back and fix mistakes in an illustration you always end up with a better image in the end. Art takes time and patience, it’s okay to mess up, but if you notice you’ve messed up it’s your responsibility to fix it