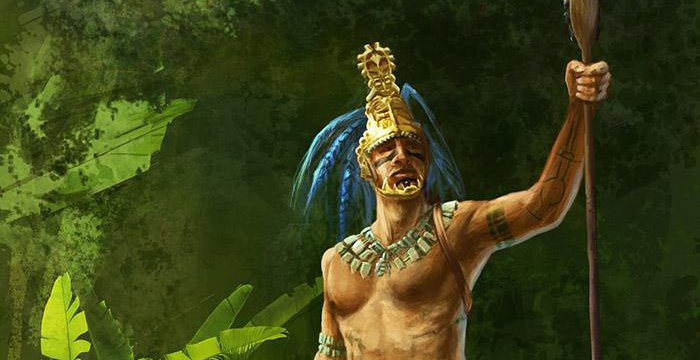 Take a look at the first chapter of the popular Photoshop tutorial eBook,Tribal Warriors... 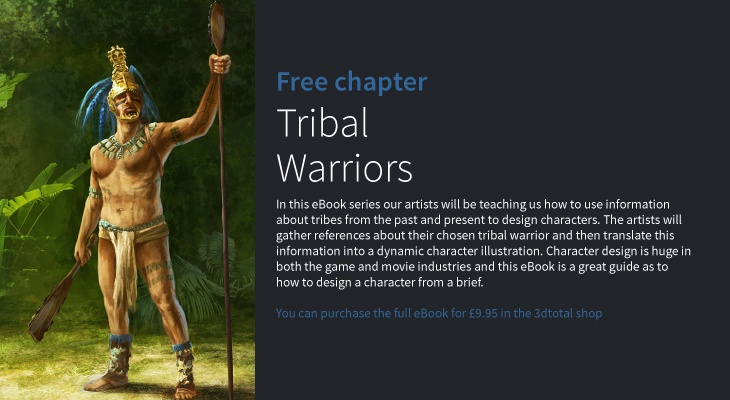 The Aztecs were a group of people in central Mexico who were prominent between the 14th and 16th centuries. Their civilisation accomplished some great artistic and architectural achievements, and their history demonstrated some rich traditions. Perhaps one of their most commonly know traditions is that of human sacrifice, which can be seen illustrated in manuscripts from the time. In terms of finding reference material there are obviously no photographs from the period and so you can only rely on painted manuscripts and costume recreations. For the purposes of this tutorial I thought it would be interesting to create a semi- realistic character that was part based on actual records and manuscripts, and combine this with an imaginary element.

Due to the colorful nature of Aztec culture and society, together with the area that they once inhabited, I decided straight away that I wanted this painting to have a rich palette with lots of saturated colors. From looking at various reference images I got the impression of elaborate, exuberant costumes and beautiful, decorative jewellery. These were most likely used for ceremonial purposes; however I liked the idea of adorning my warrior in something similar to make him look more interesting. I therefore imagined a warrior who may be dressed up slightly for some form of ritual or ceremony.

The first stage was to fill in the background with some vivid greens and a suggestion of some jungle foliage and ground. Fig.01 shows the initial block in using some textured custom brushes. 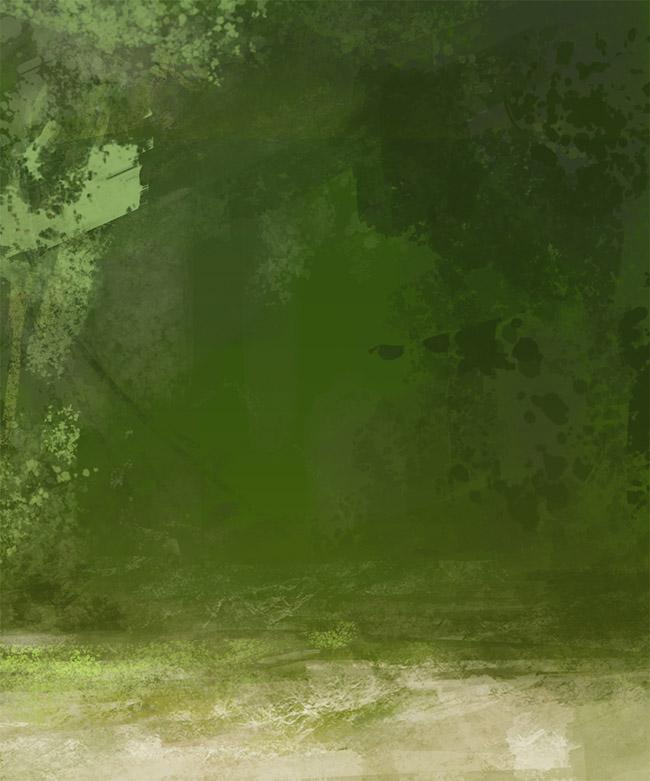 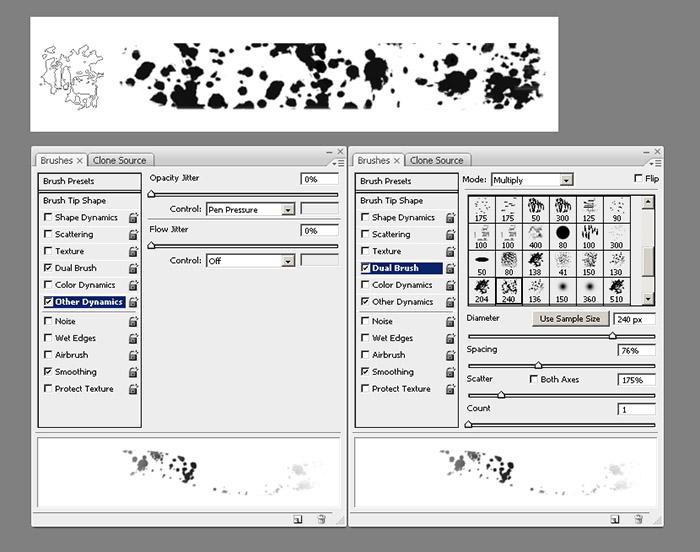 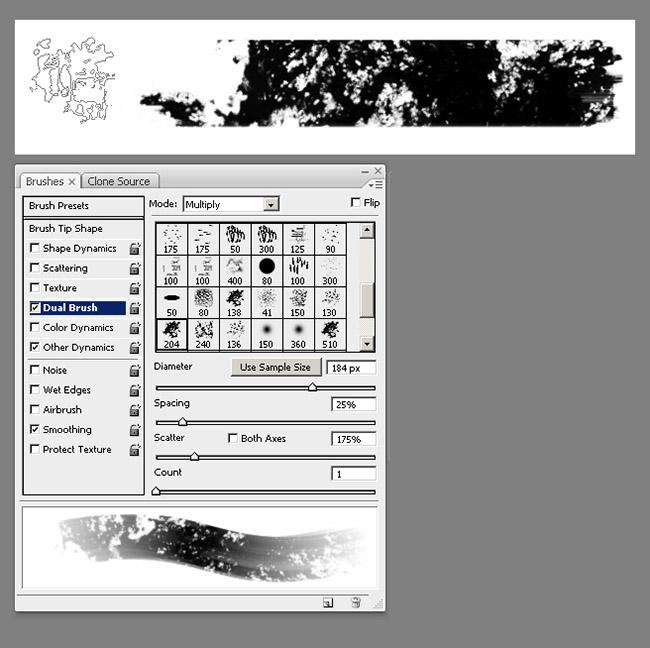 As this background would be on a separate layer to the character it didn't matter too much if it remained vague at this stage as it could always be modified throughout the painting process.

With the backdrop roughed in I started blocking in the warrior (Fig.04). I filled in most of the body in a single color which would be the mid-tone. Upon this base color I could work in the shadows and highlights. 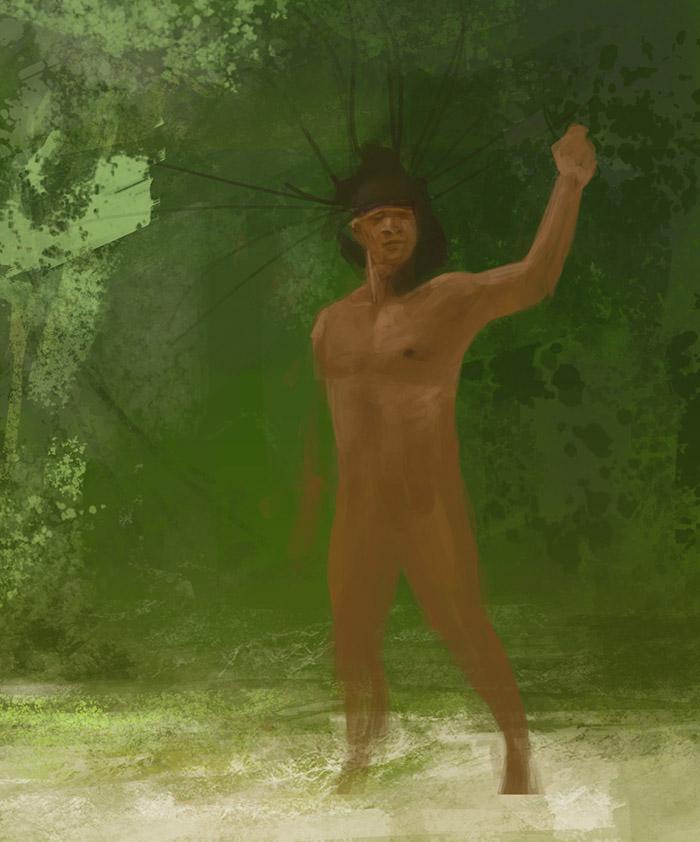 Fig.05 shows the next stage in the process which now incorporated a third layer where I began to add some clothing and accessories. If you were working in the games industry it would be a good practice to separate your painting into layers in case you are asked to change anything. Having the clothing on a different layer to the character means it can be modified with ease. Your art director may require changes to the costume and so splitting up elements can save a lot of time and headaches. 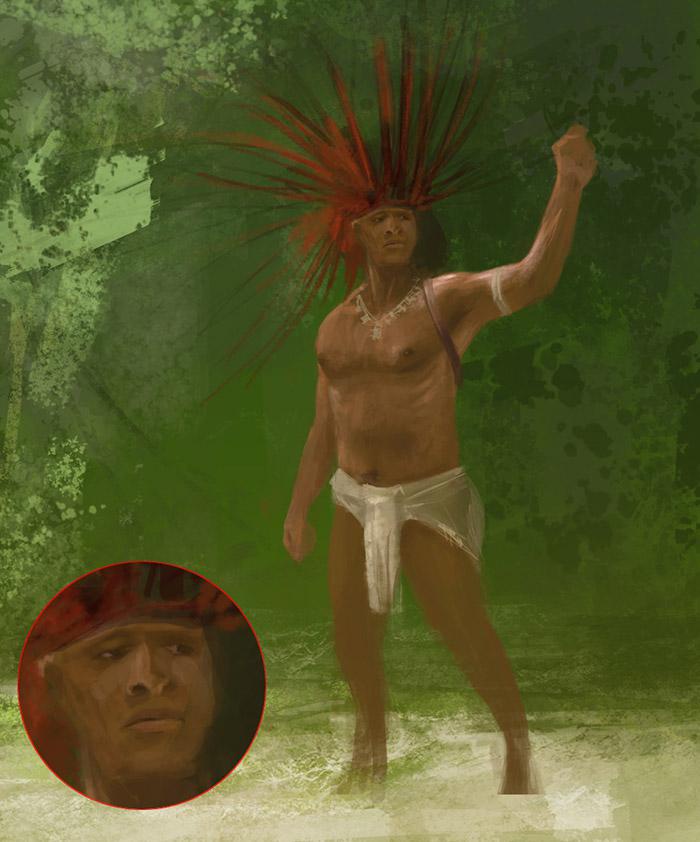 I roughed in a feathered headdress, which is something that seemed prominent in much of the Aztec art I found and was an aspect I wanted to include. I also started to develop the features of the face a little more with the light source being somewhere to the left of the picture frame.

Using a textured Chalk brush I started to build the anatomy (Fig.06). I also moved the character slightly up and to the right on the canvas as he looked a little squashed. 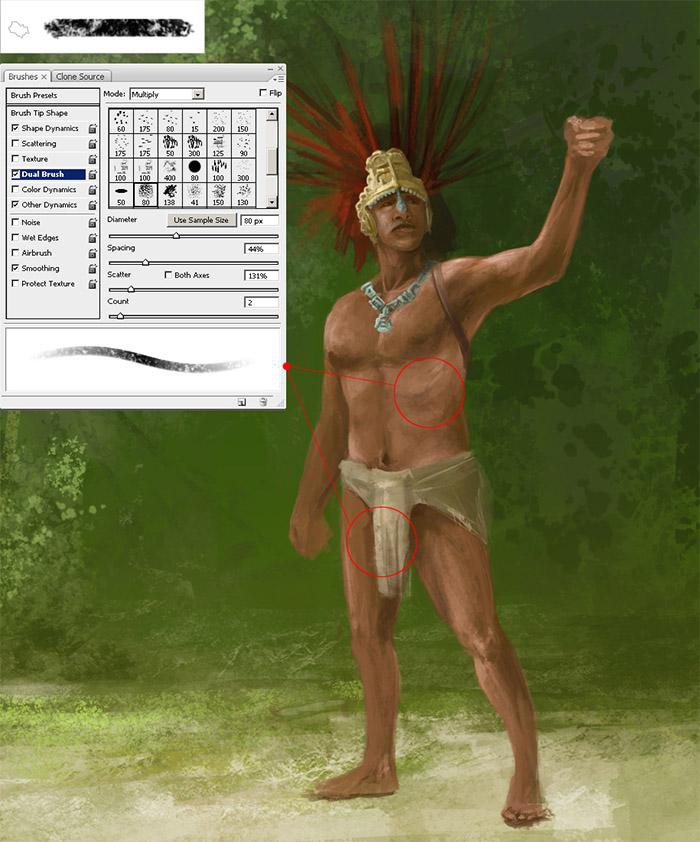 I added an extension to his ceremonial headwear, which can be seen in Fig.07. To create a highlight across the left side where the sun is hitting it I duplicated the layer this was painted on and then set the blending mode to Screen (inset 1). I then used the Eraser to delete the areas that weren't directly in the sunlight, leaving just a small section (inset 2).
I wanted to add some war paint across my warrior's body and so created a new layer for this so I could experiment with the color and blending mode easily without it affecting the main image. I started with the face and in the end chose Normal as the blending mode. To make sure the paint was consistent with the lighting I used the Eraser tool to make the highlighted areas semi-transparent (Fig.08). 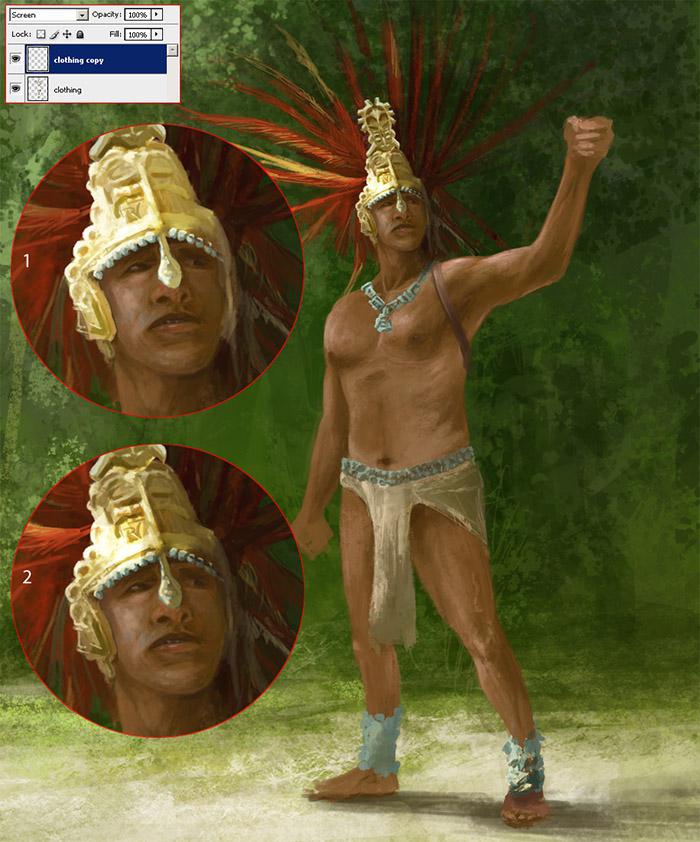 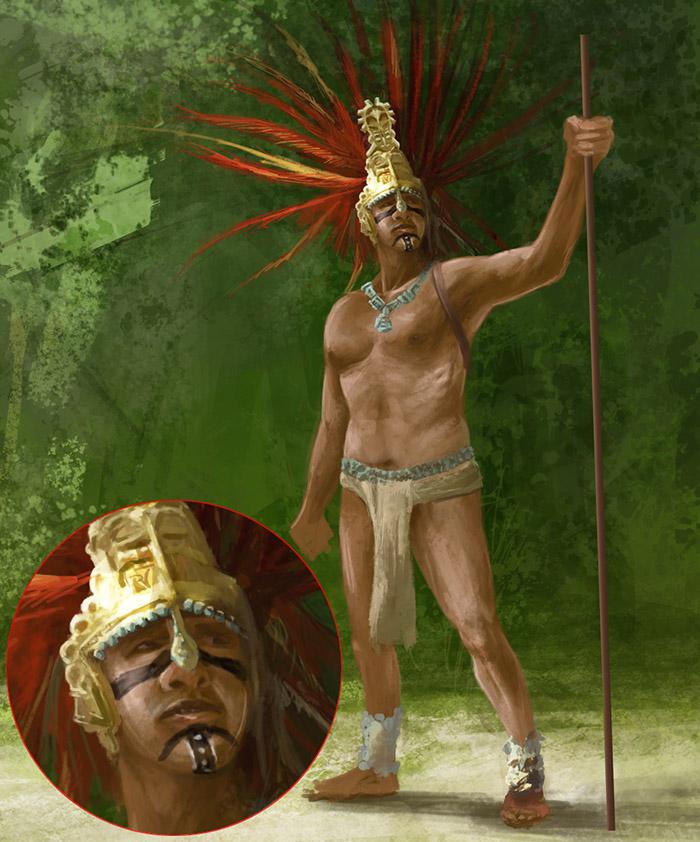 The skin tones looked a little flat and so in order to increase the contrast I applied a Brightness/Contrast adjustment layer. I increased the values by around +30 in both cases and then used black to paint into the mask and restrict the adjustment layer to the left-hand side of the character (left image in Fig.09). You will also notice that I have added some extra decoration around his neck and chin now, labelled 'Layer 3' in the palette above tattoos. 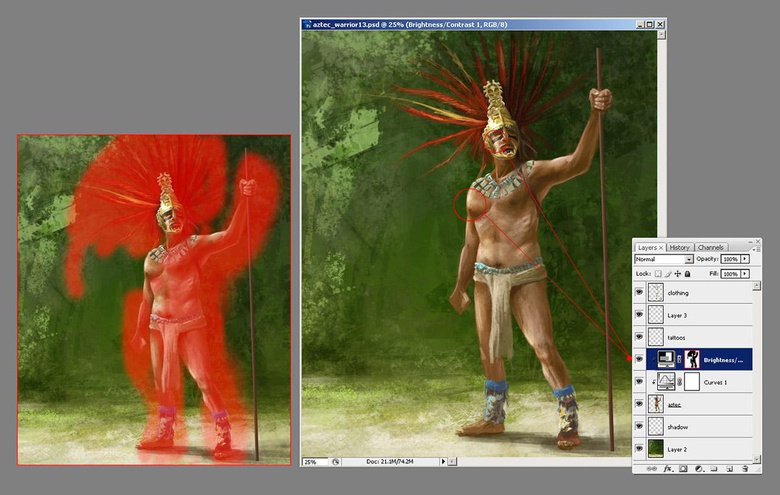 I wanted to have a few tattoos across my warrior and so created a new layer in order to experiment, as I'd done with the face paint. The Overlay blending mode is probably the most suitable setting and using a chalky green I painted some shapes across his torso and limbs (Fig.10 - inset). You can see how these finally appear in the full image when the blending mode is altered.

The overall lighting was another aspect that was troubling me at this stage as it seemed dull and did not have the vibrancy that I initially intended. To rectify this I merged the two previous adjustment layers with the character layer and then applied two more; a Curves and a Brightness/Contrast layer. On the left is the image before these were applied and on the right is the effect of these along with their settings. You can see now that the general color scheme has been enriched and the light feels much warmer and more tropical.

During the painting process I realized that the right leg looked a little twisted and the curvature through the lower leg seemed exaggerated. I decided to change it by making a selection area from the knee down and then rotating it (Fig.11). You can, of course, opt to use the Warp tool in Photoshop although this can sometimes distort the overall contours of the image. Either way works fine really; it just depends on your preference. 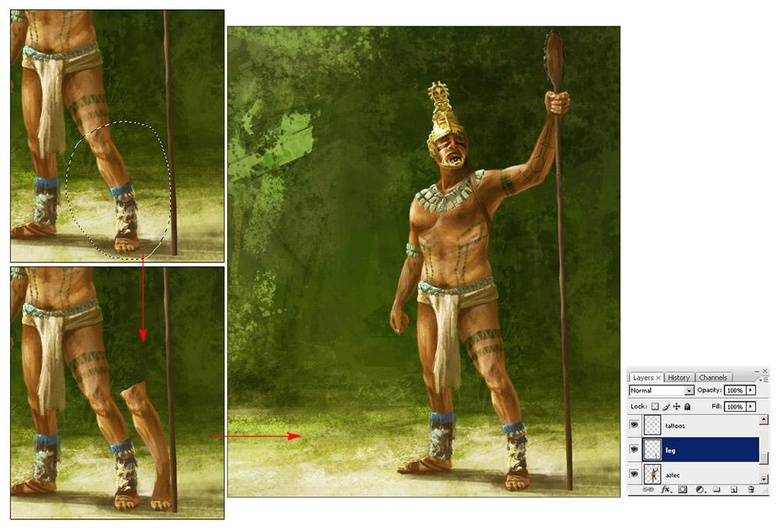 Once the lower leg was duplicated I rotated it and then used the Eraser tool to delete the unwanted areas on the character layer as well as blend any obvious seams. Here you can see the before (upper left) and after results (right). After doing this I then rotated the ankle decoration on the clothing layer to match the new position of the leg.

You will have noticed that I have also deleted the red feather headdress, which I felt was somewhat out of balance. I was quite keen on this part of his costume and so replaced them with a smaller bunch (Fig.12). 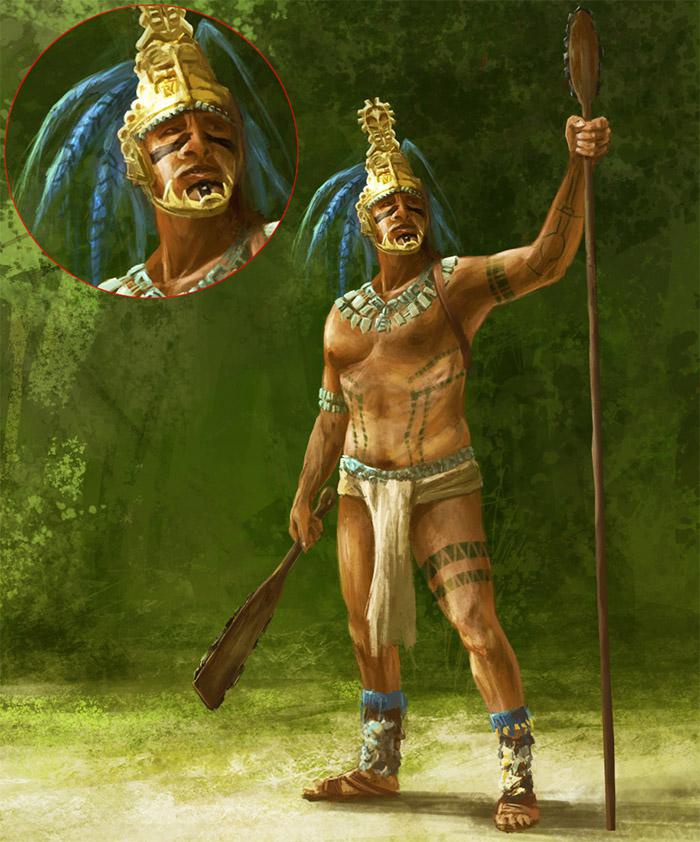 Although our character is wearing some ceremonial clothing he is nonetheless a warrior and so I thought it only fitting to supply him with a typical Aztec weapon: the Maquahuitl. This was a weapon that was somewhere between a club and a sword and was made from wood. Embedded along its edges were pieces of obsidian (volcanic glass). This material was naturally robust and sharp and made a perfect material for cutting and piercing.

The picture at this point was reaching its final stages, although there were a few adjustments that could help improve things. Although I wanted to focus the attention on the warrior and not the background I thought that some textural realism might help in the way of some foliage. I looked through the free library of photos available on 3DTotal and found the following two images which were perfect for the task:

In the case of the first one I made a selection area around the large foreground leaves and then pasted these into the painting (Fig.13). Once both pictures had been pasted in, I color corrected each by reducing the contrast and also the saturation of the leaves in the lower image. 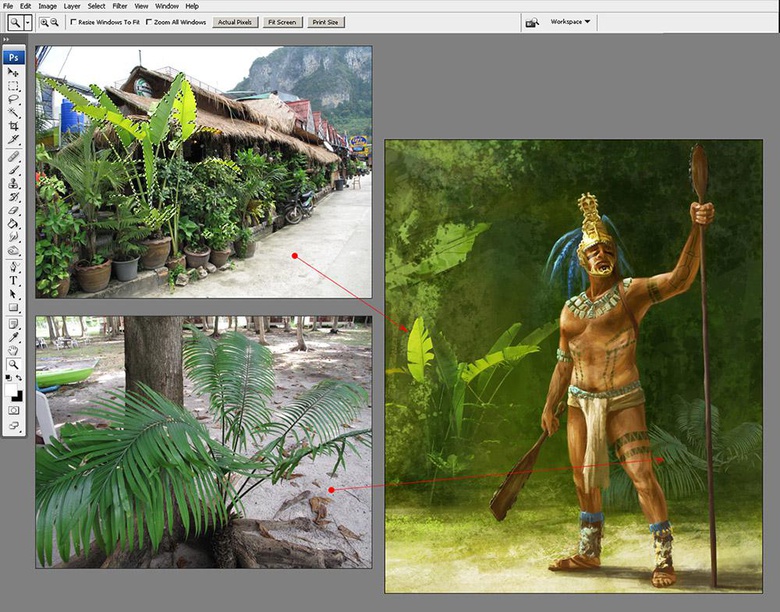 I also found a useful image of some ground with scattered grass and earth and decided to overlay this across the jungle floor (Fig.14). I used the Transform tool to scale it vertically in order to create a more accurate perspective and then set the blending mode to Soft Light (lower image). 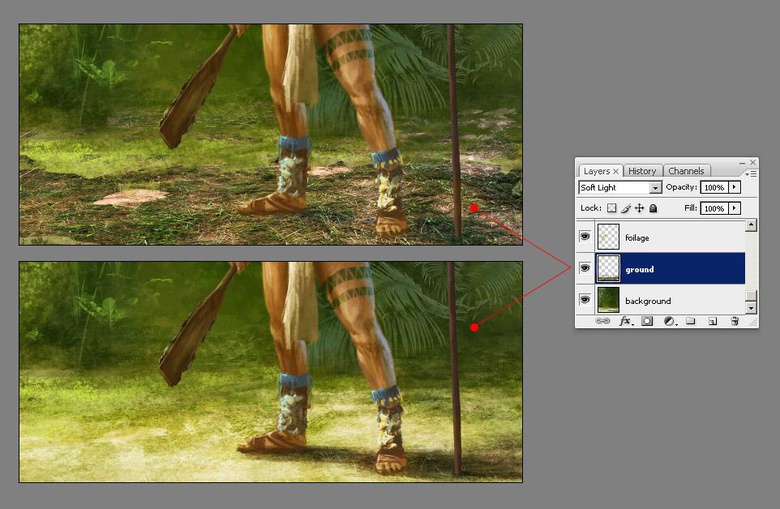 I decided to increase the contrast in the Curves adjustment layer and then added one final layer which was some reflective light across the warrior's right side. With this the painting was complete. 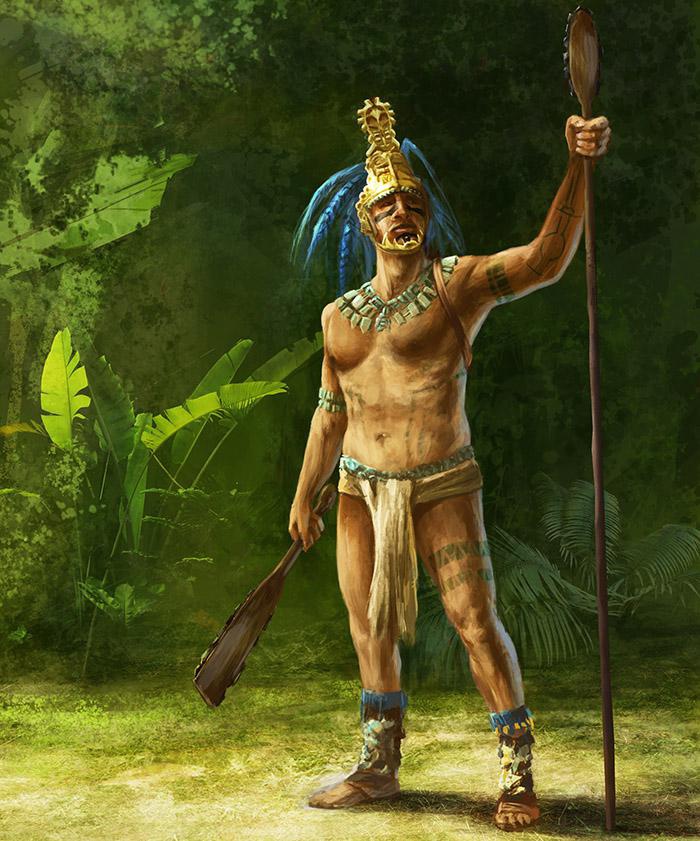