Mark Hammermeister shares top tips on creating caricatures as he shares the process he used to paint his image Mayor Rob Ford in Photoshop.

This is a self-promotional caricature I did of Toronto Mayor Rob Ford, whose antics recently gained worldwide attention. A good caricature should capture more than just the superficial features of the subject. Whenever possible, it should encompass the subject's personality and make a statement about who they are.

A good caricature should capture more than just the superficial features of the subject. Whenever possible, it should encompass the subject's personality and make a statement about who they are.

I knew I wanted to do a piece that focused more on Ford's self-destructive nature than just the clownish persona he had been showing publicly. In most cases, the first thing I do before I start a new painting, is draw a series of quick thumbnail sketches in order to figure out the idea. But in this case I had such a strong image in my mind of how the final piece would look I felt confident enough to start with a loose sketch. I did a quick Google search for some photo references of Ford in order to shore up the likeness and I was ready to go.

In order to draw a good caricature, it's necessary to develop your skills of observation

In order to draw a good caricature, it's necessary to develop your skills of observation. Learn to pick out and identify the major shapes of the face and make judgments of which features you plan to exaggerate and which to de-emphasize. Rob Ford has a huge, egg shaped head and tiny, beady eyes hidden beneath a big shelf of a brow. By reducing the eyes, nose and mouth and squeezing them into the middle of his face, it makes him seem even larger overall.

Step 1: Start with a sketch

I do my sketching using Ditlev's pencil brush (you can find it by searching Google). I kept my sketch loose and set the layer mode to Mulitply. I filled the layer below that one with a greenish gradient. The green base color will help set the overall tone for the entire image. 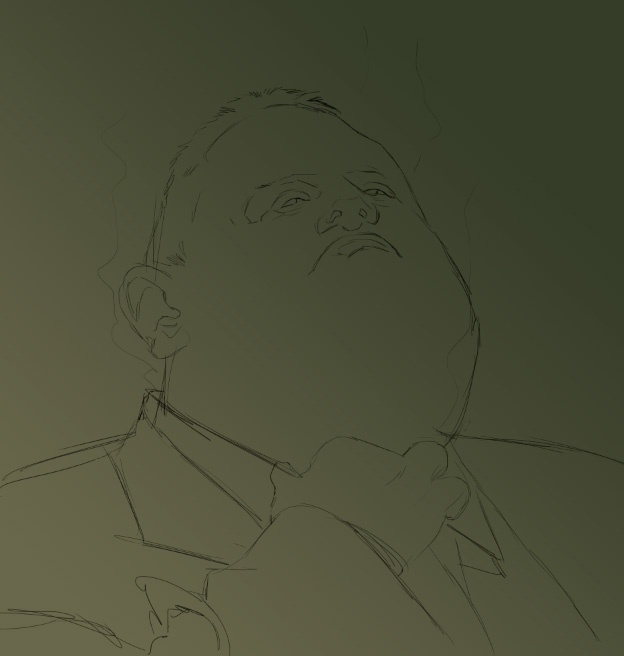 I drew my sketch on its own layer and set the layer mode to Multiply.

I create another layer below the sketch and, using a hard round brush, I block in my base colors. I choose a dark mid-tone for each base color. I'll avoid zooming for some time over the course of my painting. This allows me to work faster and not get hung up with the details. 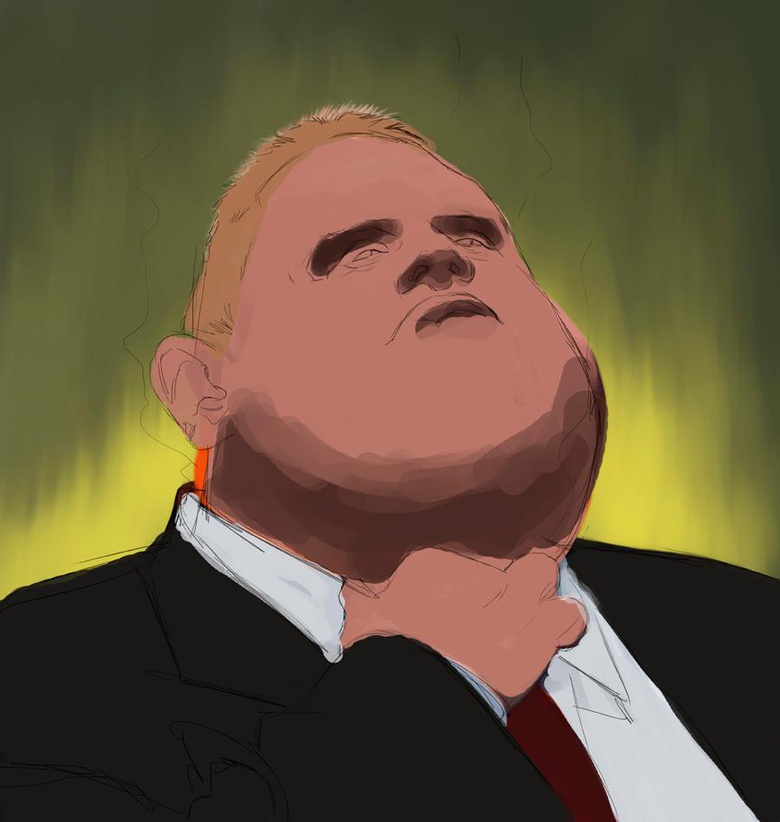 Using a basic hard round brush, I begin by blocking in base colors on a separate layer below my sketch layer.

I gradually begin working in other colors to model the forms and give the flat colors from the first step some depth. I determined early on that I wanted to have one of the main light sources coming in from above, so I paint in some deep shadows, giving him a sinister appearance. 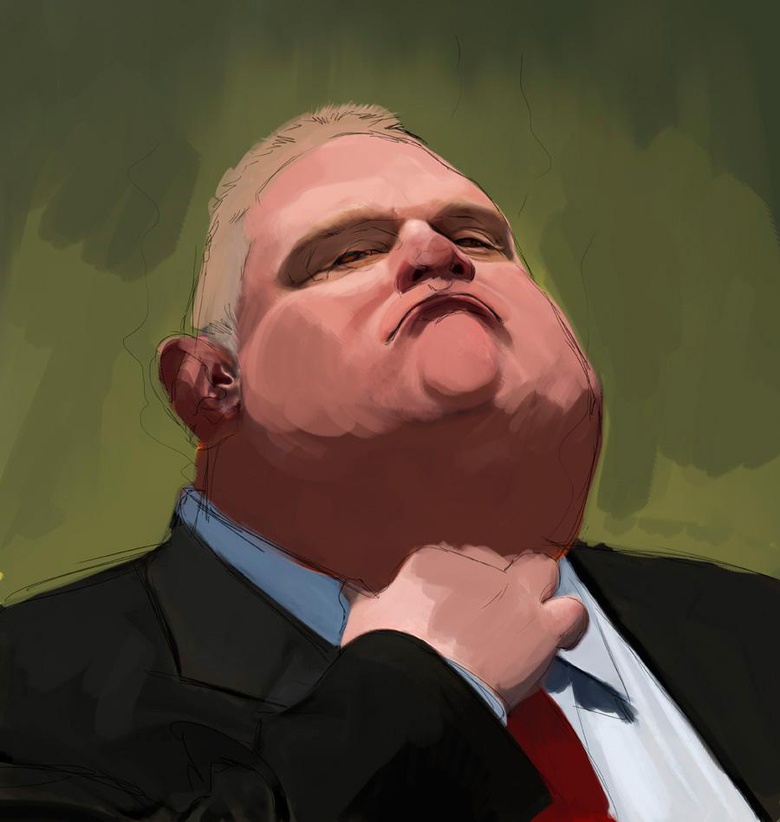 I gradually begin working in other colors to give the flat shapes form and depth.

I continue rendering the forms to create the illusion of depth. I also decided his ear was too big, so I selected that part with the lasso tool and shrunk it down. You can see how much compared to the sketch layer. I've started switching between the hard round brush and one of the standard Photoshop rough edged brushes. 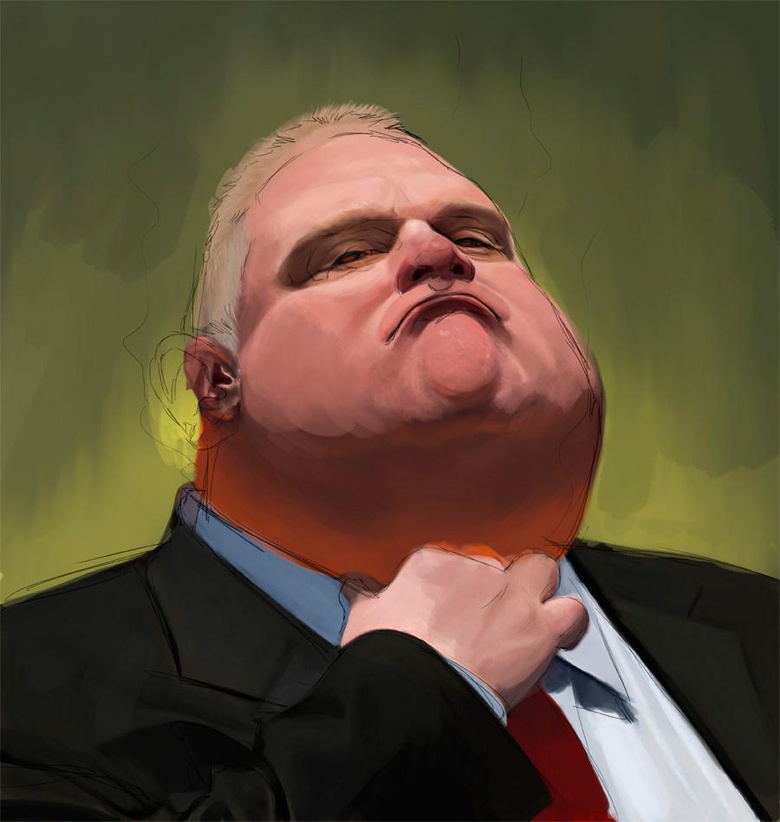 I continue rendering the forms using a combination of the hard round brush and one of the rough, "painterly" brushes.

I'm finally comfortable enough to delete my sketch layer and also zoom in and work the finer details. I use progressively smaller brushes as I go along to tighten up the details. I've also decided to start working on the hair. I always draw hair on its own layer, so that if I make any mistakes it's easy to erase. I use a standard soft round brush with Shape Dynamics turned on and draw in each strand of spiky hair one at a time. 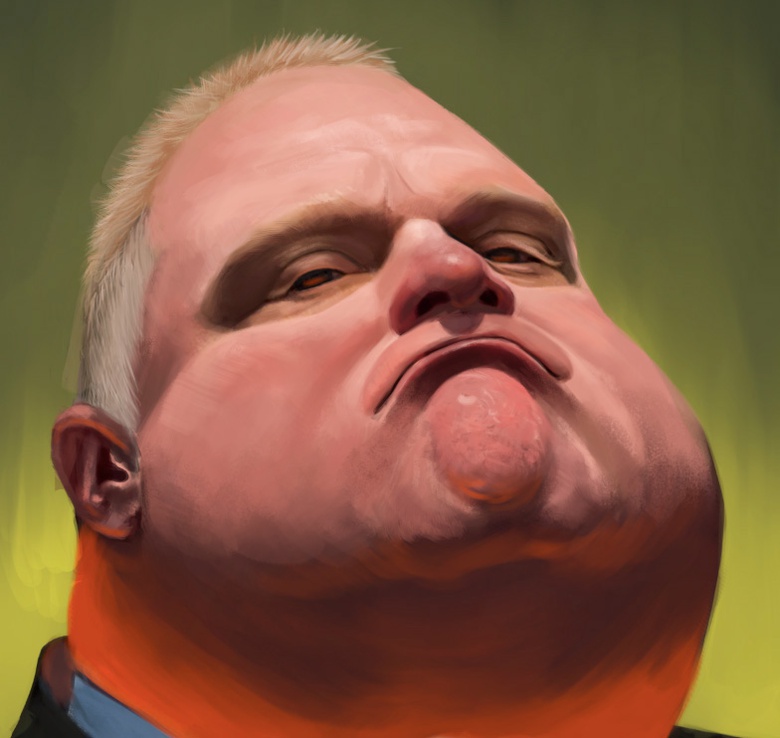 Using a series of progressively smaller brushes, I begin to refine the details throughout my painting.

My plan from the beginning was to create a visual metaphor depicting Ford's inner rage. I thought it would be fun to make it look like his rage was emanating like a furnace just below his collar. On a new layer, I begin working a bright fiery orange in around the neckline, blending it in with the shadows on the layer below. 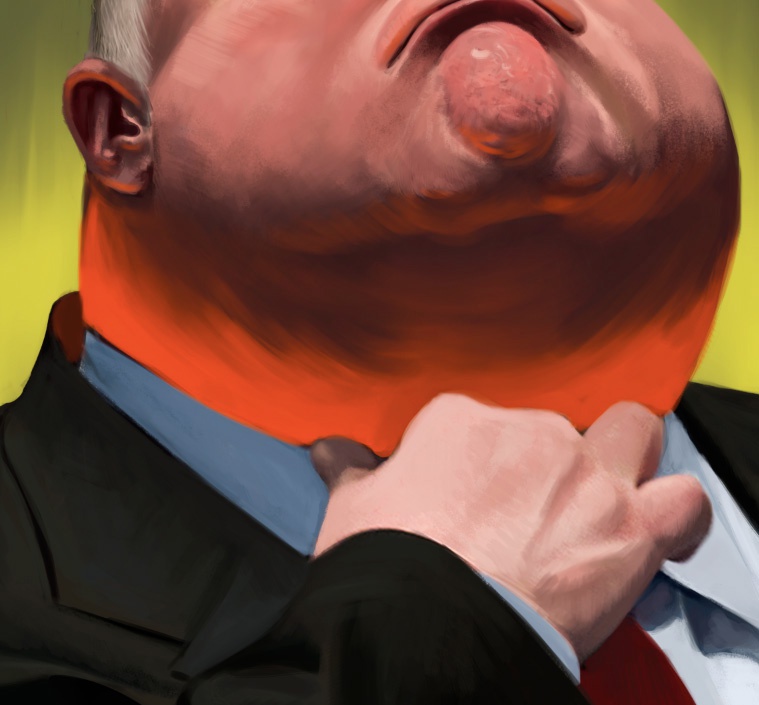 I continue rendering the forms using a combination of the hard round brush and one of the rough, "painterly" brushes.

The eyes and mouth are two of the most important details to get right on a caricature. I've zoomed in very tightly on the face and continued to sharpen and refine these details. You can see where I've sampled some of the orange color from below and worked it into some of the areas that would catch a bit of the same reflected light. 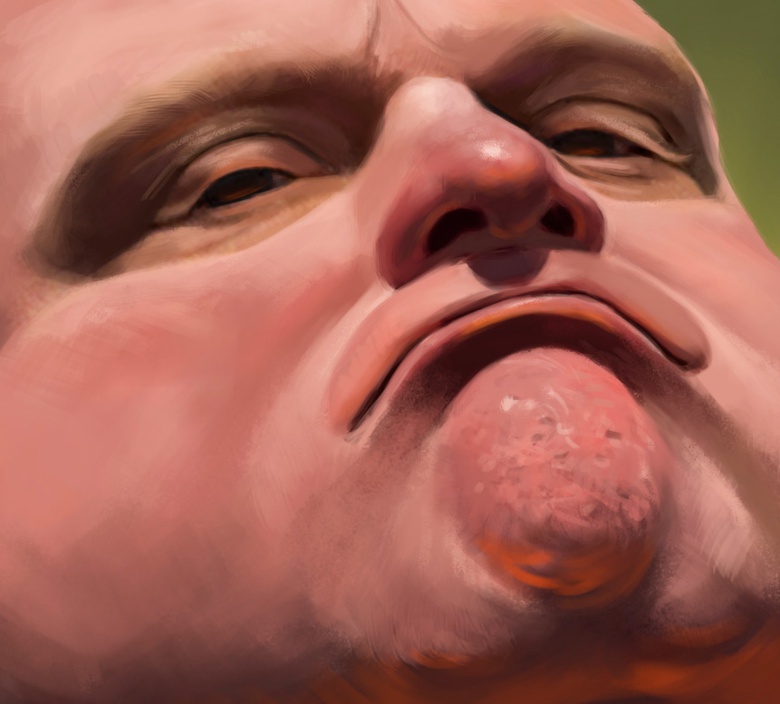 I've zoomed in very tightly on the face and begun to really sharpen the fine details around the eyes and mouth.

In order to make the fiery area around his neckline really pop, I create another layer above the orange color I've already laid down, and set this layer to Linear Dodge. I paint in a bright yellow orange color. I use a soft edged eraser to remove a little of the bright yellow to blend it better with the layer below. I use another Linear Dodge layer to do something similar with the background, only there I paint in a layer of atomic yellow green color. 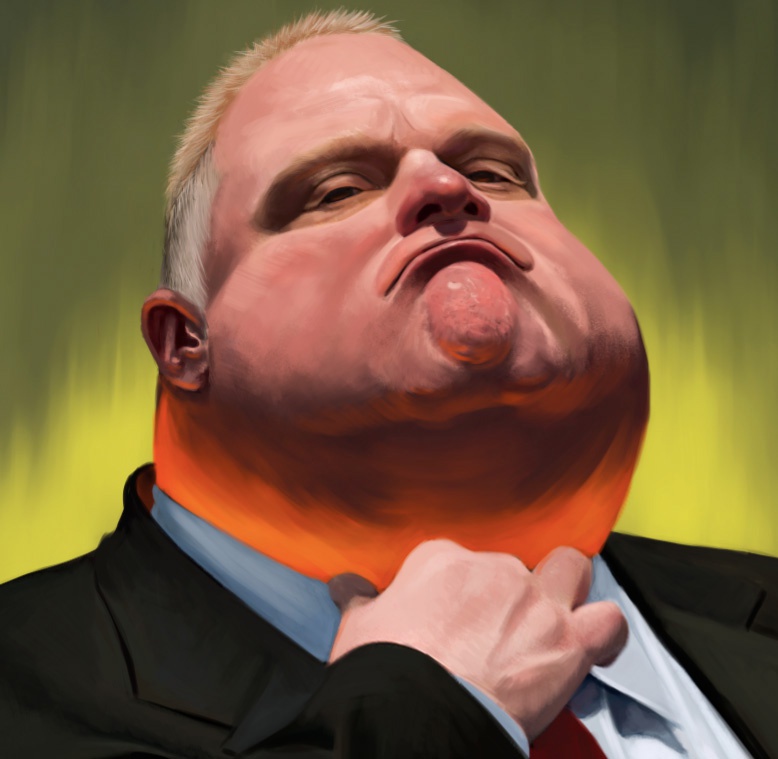 On a Linear Dodge layer, I paint in a very bright yellow orange color in order to create the fire effect coming up from under his collar.

Among the many brushes I've collected over the years are a huge set by the illustrator named Yang Xueguo, better known as Blur. Among this huge set is a terrific smoke brush that I use to paint columns of smoke coming out from under Ford's collar. 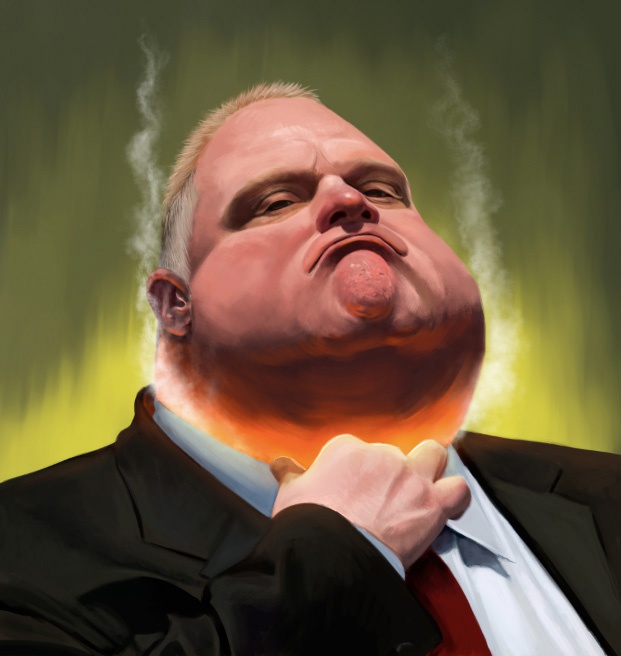 I paint in some smoke coming up from his collar using a custom brush.


The last thing I do is draw a pipe icon with the pen tool in Adobe Illustrator. I copy and paste this several times into the Photoshop document to create a pattern over the tie. I merge those layers, then use Transform > Warp to make the pattern wrap naturally around the tie. I add a layer mask over the pattern then use a soft round brush on a low opacity to lightly erase some of the pattern, in order to make it blend naturally. 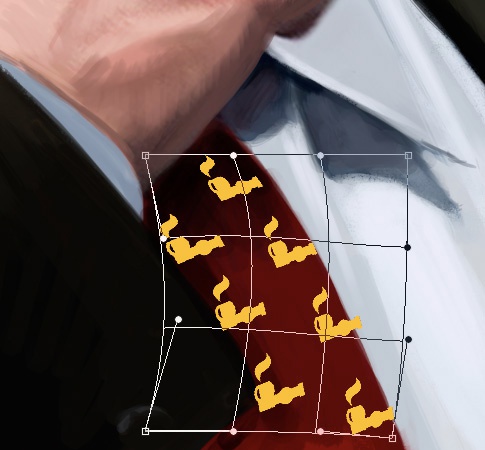 I drew a little pipe in Illustrator, and copied and pasted it several times over the tie. 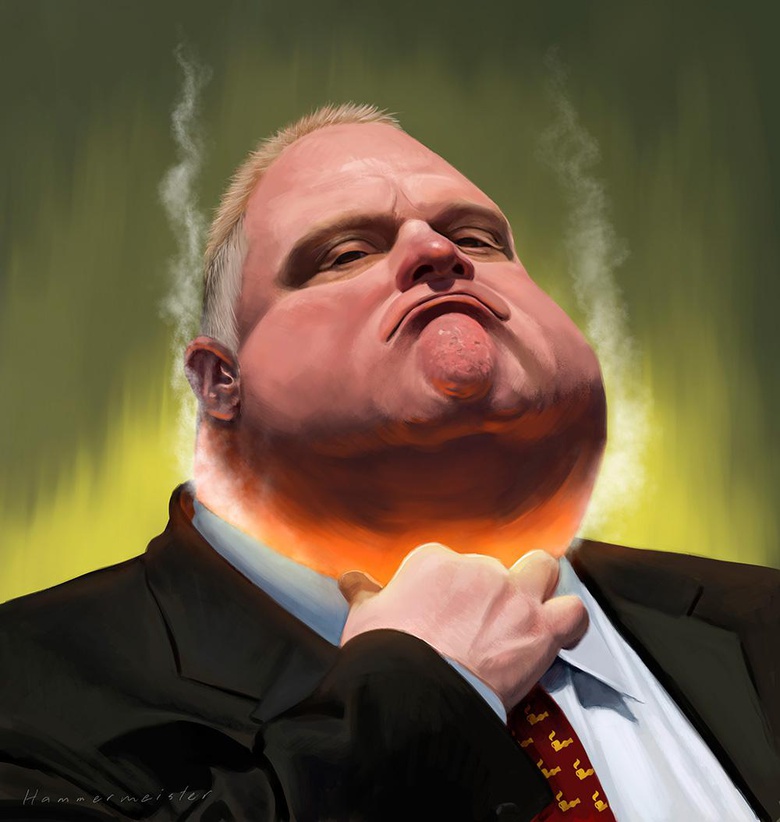