Top 5 Reasons to use iClone and HitFilm 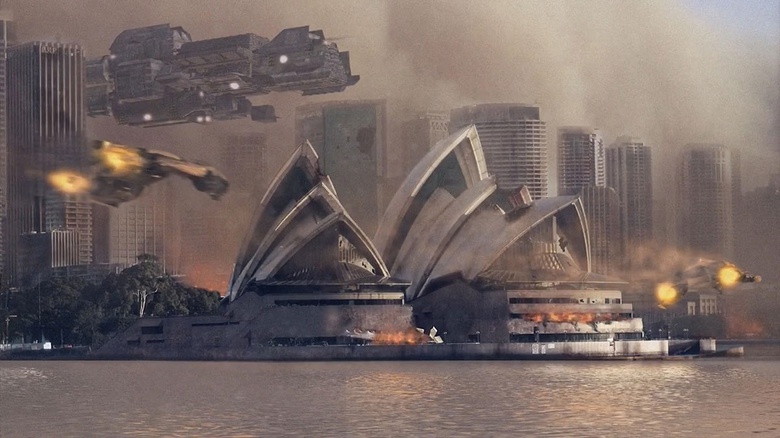 iClone and HitFilm combine with outstanding results for incorporating 3D animation, 3D models and video editing. Here are the top 5 reasons I've found to use iClone and HItFilm together as a power-duo for 3D and video VFX.

iClone is a powerful 3D animation software, that stands out by being affordable, very intuitive and user friendly. It has a surprisingly short learning curve, and it really boosts the performance of any animation process, allowing you to achieve spectacular results without the need for expensive and complicated resources. 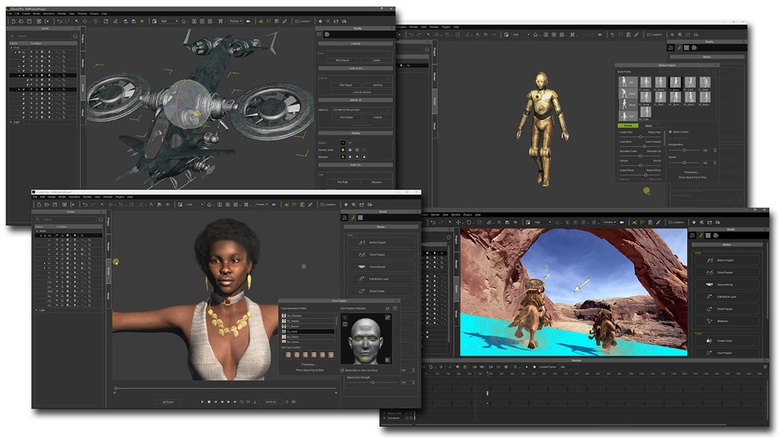 iClone is not just powerful, but is also much easier to learn and use than any other 3D animation software

HitFilm is a very powerful visual effects and editing application that is also much easier to master than most software on the market. Although it allows professional results, FXhome have paid special attention to help beginners and encourage indie filmmakers to include visual effects in their projects. 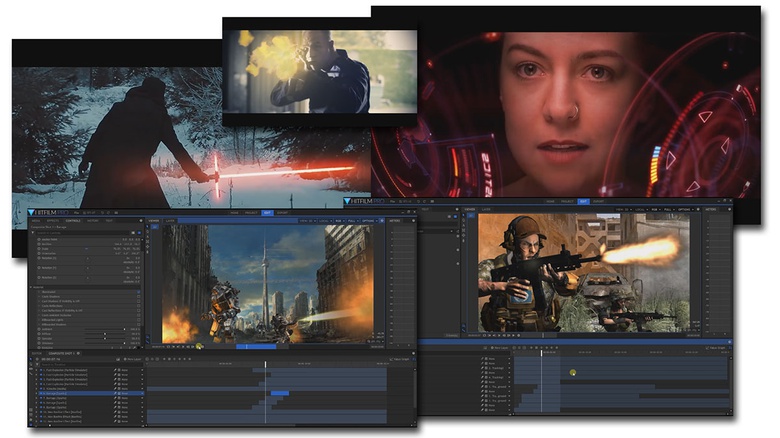 Filmmakers often need to include expensive items in their productions, like military equipment, buildings, space ships, and so on. In these cases, 3D models are very useful as they can be mixed with the real footage, helping you to create the adequate sets without the need to build them. 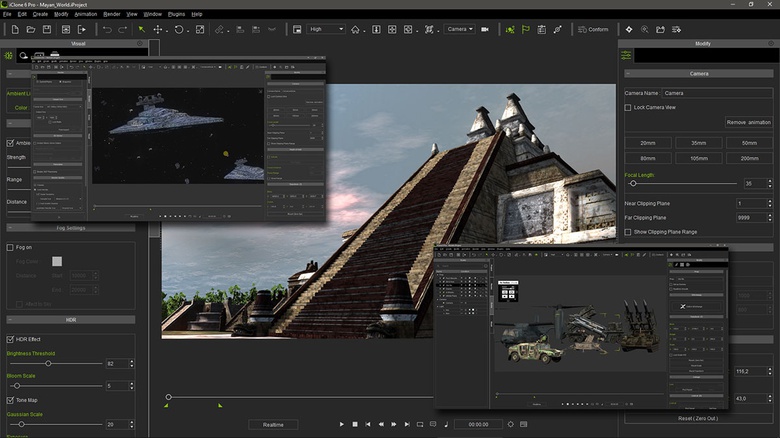 iClone can manage and animate any kind of complex scene, that once rendered, can be used as compositing layers on HitFilm

Through 3DXchange, iClone can import and prepare a huge amount of 3D props and motions available on the Internet, imported from other 3D apps or captured with Mocap. Any 3DS, FBX or OBJ standard model can be converted in an iClone prop, as well as the BVH motion files can be applied to the iClone characters.

In addition, all the free Sketchup models of 3D Warehouse also can be imported directly into iClone. 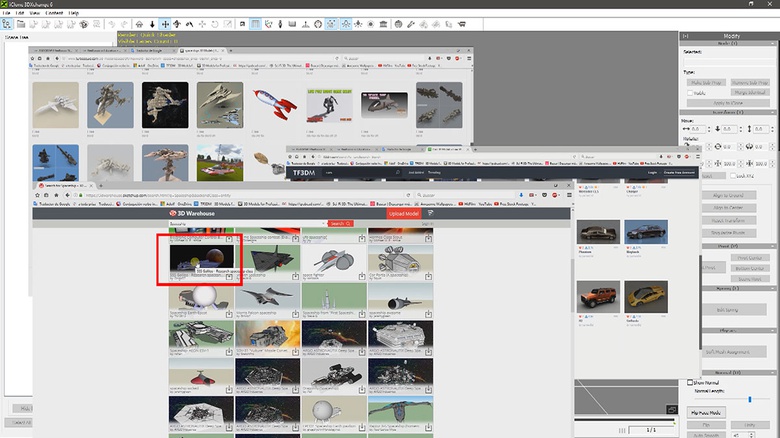 Virtually, any model we could need can be found on the Internet. Reallusion 3DXchange is a bridge application that allows you to import and export standard models, in and out of iClone

Once in iClone, you can easily change a 3D model's materials, editing the look of the model in a matter of minutes. The intuitive tools inside iClone, like Motion Puppet, Lip-sync and the Motion Library can animate the models and prepare them for the compositing process in HitFilm. 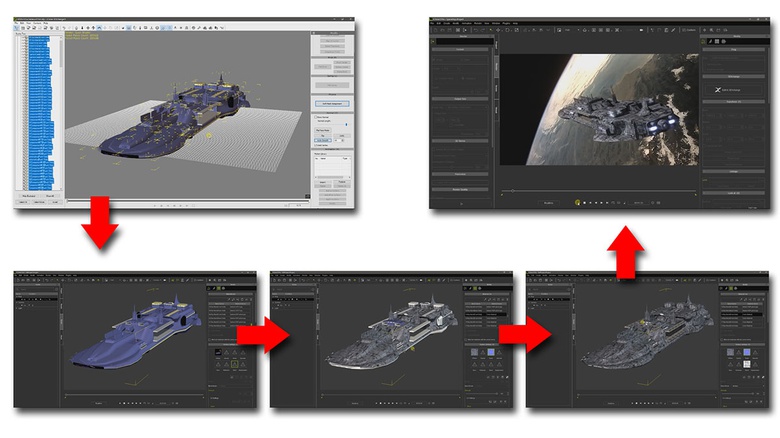 The models imported from Sketchup can look too simple, but properly textured in iClone they can finally appear very convincing

iClone goes even further, offering a lot of interesting features like: PBR materials that provide an extremely realistic aspect to standard props; a physics engine that allows the rigid models to interact between them in a very natural way; or soft cloth physics that adds extra realism to the scenes, simulating the movements of the clothes, while interacting with the wind, the rigid props or the characters. 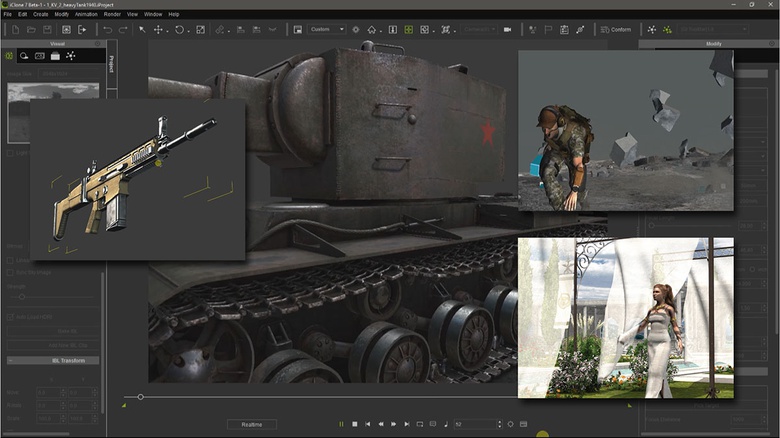 You can even easily add trees, bushes and grass to your scenes, using the massive botanic library inside iClone. All these models can be animated with wind and "planted" in random clusters following the terrain. 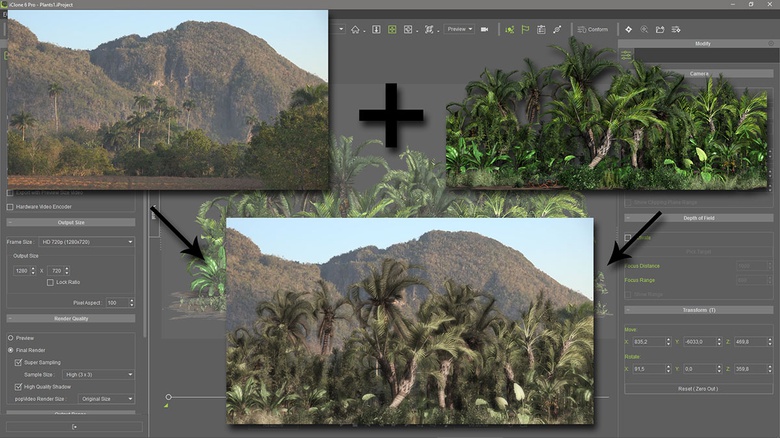 The moving plants and trees are rendered already masked, making the compositing with the real footage extremely easy

iClone can manage and animate special characters like robots, aliens, or even background extras that could be needed in your productions. 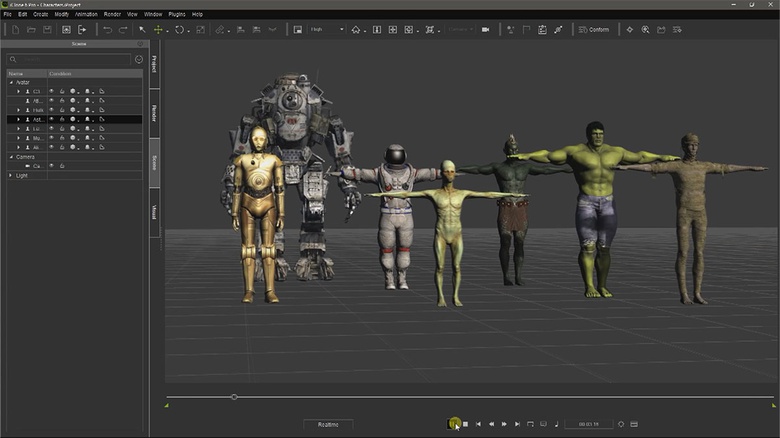 Some types of characters that will require extreme makeup, or special clothes, are perfectly suitable to be animated

Character Creator, from Reallusion, allows you to create any kind of biped actors that can be automatically exported to iClone, where they can be easily animated using their very intuitive facial and body animation tools. You can even use mocap devices like the Noitom Perception Neuron Suit or the Microsoft Kinect to capture your movements and apply them to the models. 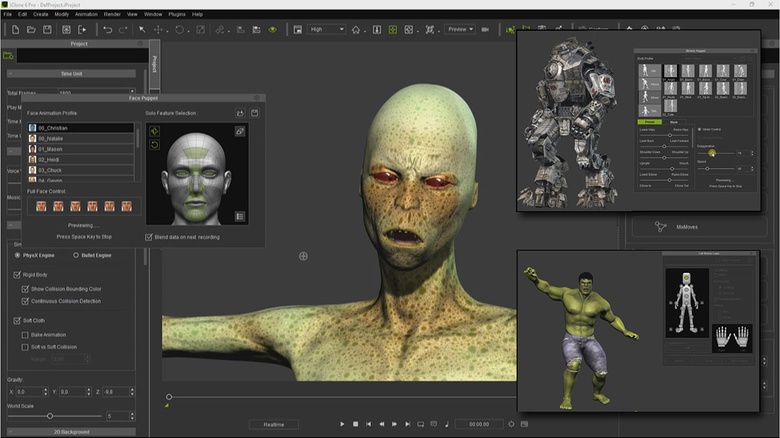 iClone has a wide variety of animation tools that allow you to apply facial expressions and concatenate movements to the characters in real-time, just using the mouse as controller

iClone animated models can be exported to HitFilm in Alembic format, allowing you to put them in a real 3D environment, using the lights, effects and cameras of HitFilm to set the scene before rendering the final sequence. 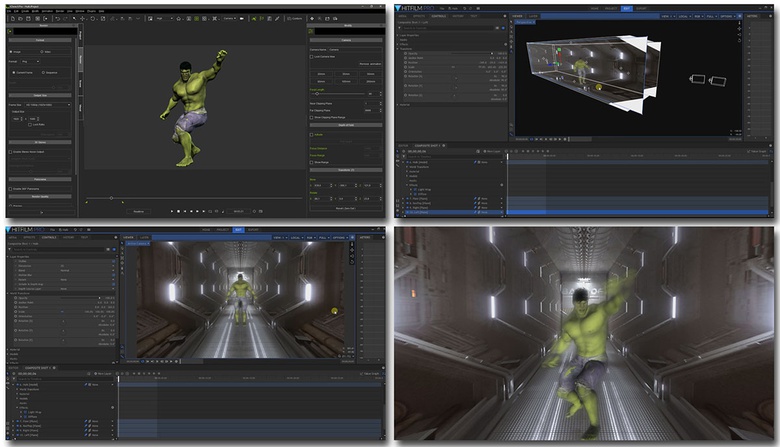 Alembic embeds the character and its animations in the file exported, so it can be managed as a real 3D model in the HitFilm project

You can also use the real footage in iClone as background. It helps to place the characters and props and adjust the correct light and camera view. The render obtained from iClone can then be used as a compositing layer in HitFilm with very few adjustments. 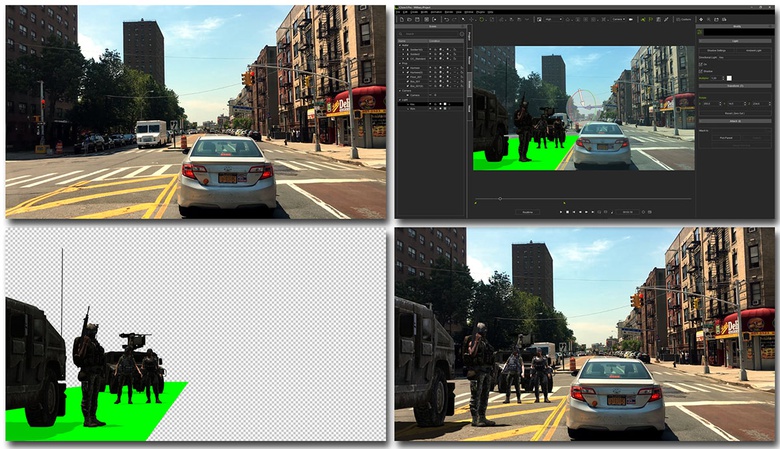 If you use the filmed footage as background in iClone, it helps to put the actors and items in place and adjust the scene's light. The rendered sequence without the background is then used as a 2D layer in the HitFilm compositing process

HitFilm allows you to create a huge variety of visual effects, so you can easily enhance your shots, adapting them to the needs of your scripts. 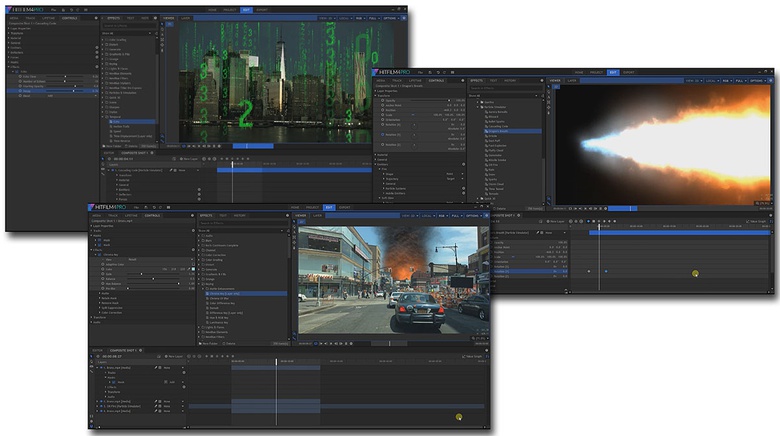 HitFilm comes with a large amount of predefined effects, but you can create your own presets and store them. The combinations are virtually endless

In this way, you can do the same with iClone renders. Your sequences will look much more realistic using the particle and camera effects generated by HitFilm in addition to the ones generated by iClone. 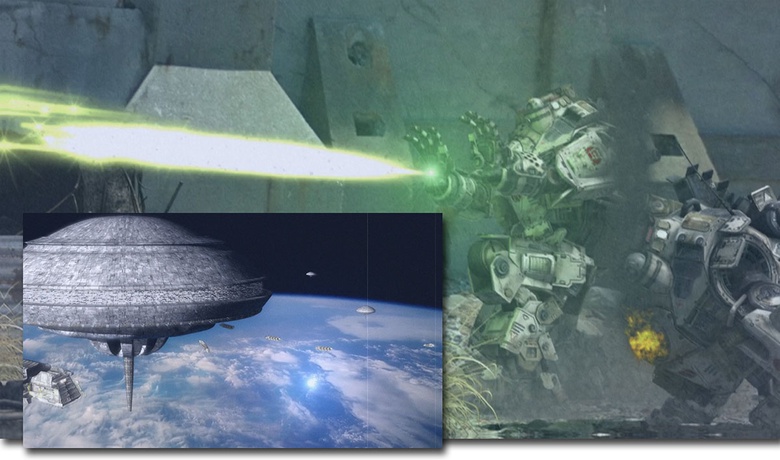 The atmospheric and light effects provided by HitFilm also add a special touch to your scenes making them much more attractive and spectacular. 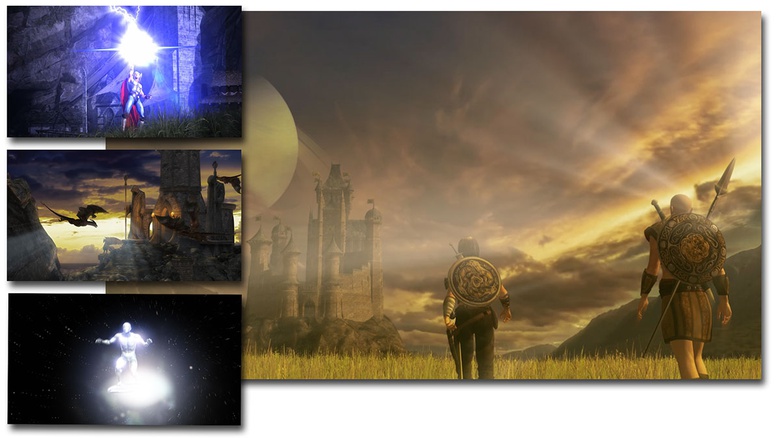 Visual effects like the motion blur, light flares or the volumetric lights completely change the aspect of iClone renders

Using HitFilm, you can create high-quality compositing sequences combining real footage and iClone renders. The 3D animated models can be placed over the real footage in iClone, adjusting the lights and the camera view. After hiding the background, you can render the scene as a png sequence that can be placed in a HitFilm layer and modified to obtain very convincing results. 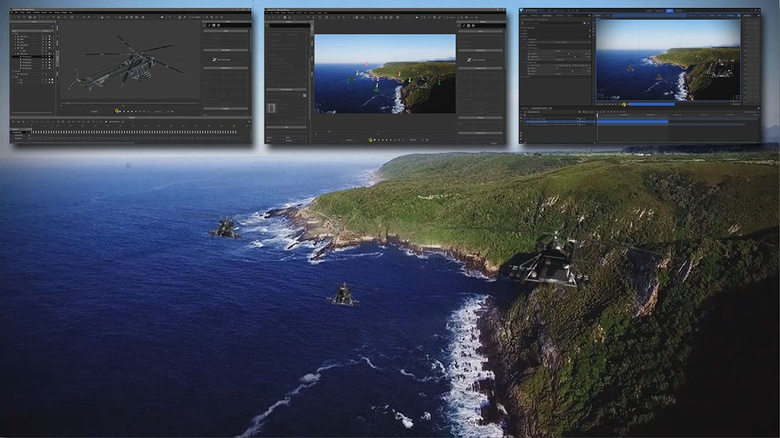 The PNG sequences rendered in iClone provide the best quality. The 32-bit images include an alpha channel that make them very easy to be composed in HitFilm, without further keying operations

You can render your iClone scene in different layers too, choosing the visible elements of the iClone project for each of the renders, depending on their depth level. These layers provided by iClone can be mixed with the visual effects layers created on HitFilm, allowing you to obtain very sophisticated sequences. 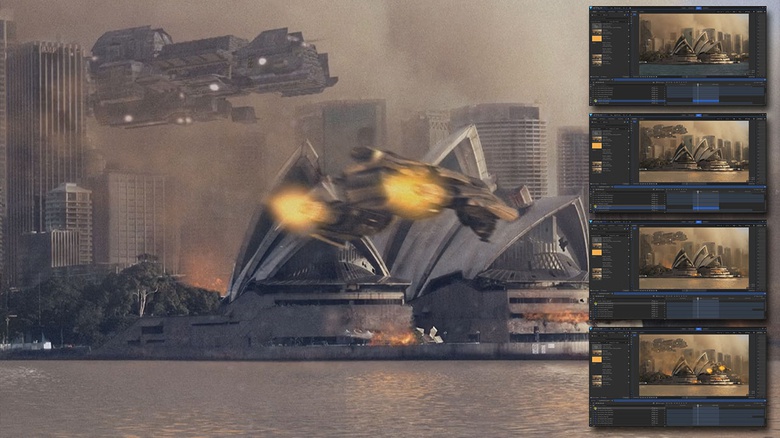 There is no limit in HitFilm to the number of masked layers that can be used to create a scene. Final grade layers allow you to apply the final effects that are common to all the layers below

And there is even more, HitFilm also can provide interesting effects, altering the colour and the light conditions of the scenes created with iClone. In this way we can give a personal touch to your productions with a defined, original look and feel. 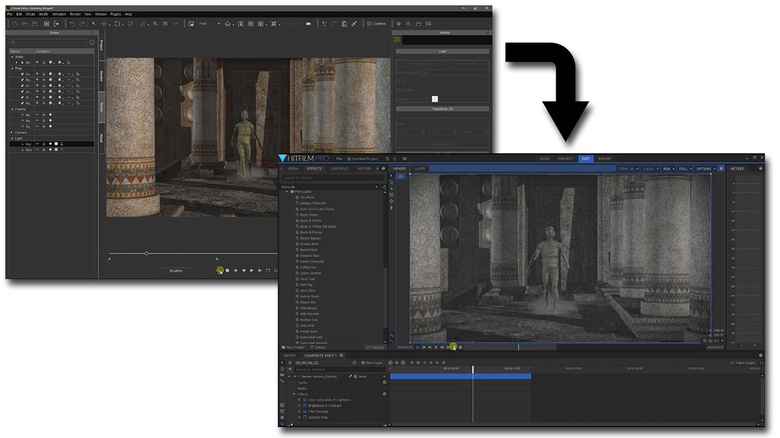 Using HitFilm, the sequences rendered in iClone can simulate different film styles. Changing or removing their colour, and adding scratches, grain, jittering and other grungy effects

Colour grading allows you to get different cinematic looks in your shots, simulating film standards or adding artistic ambient effects to your iClone productions. 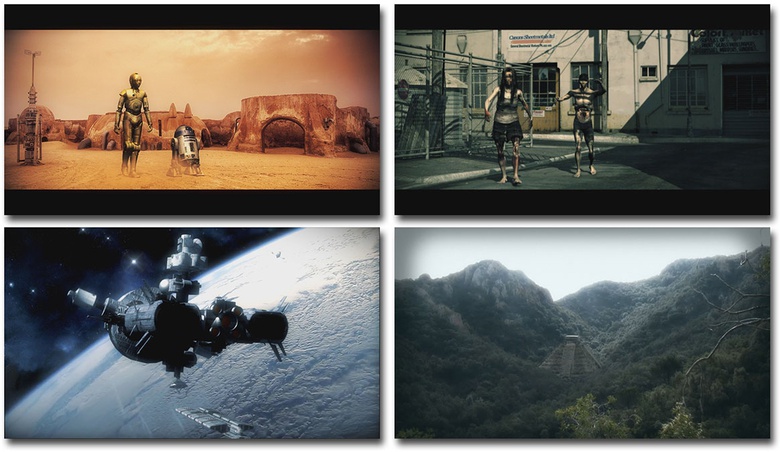 Manipulations in the colour and the luminance, provide dramatic changes in your shots. Once again, HitFilm comes with several presets that you can apply by just clicking and dragging, but you can create your own styles and store them for future use

By combining iClone and HitFilm, you can achieve outstanding results. Most importantly, these applications are affordable and really easy to learn. They provide intuitive and user friendly interfaces that boost your performance, and don't require expensive hardware like "render farms."