The Sculpture - A Texturing Tutorial

Please, let me welcome you to this tutorial. I am Edoardo Belinci and I would like to tell you something about the creation of my latest scene. 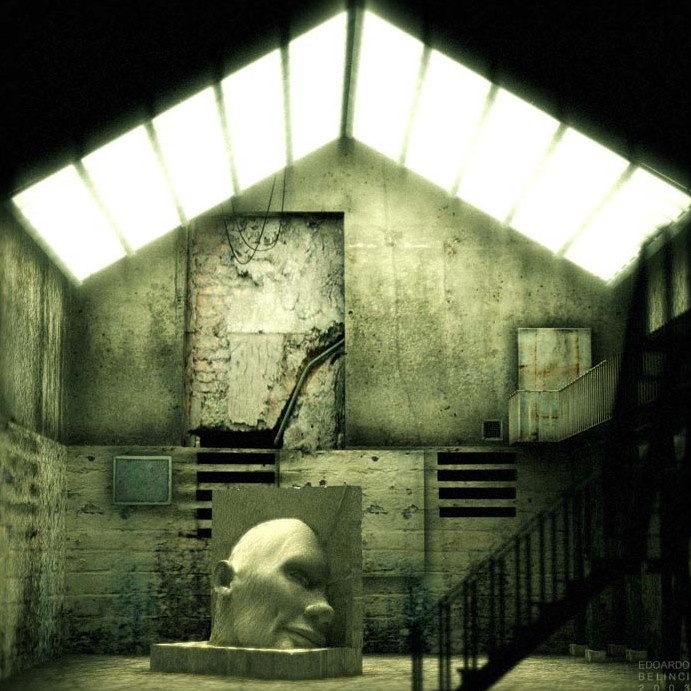 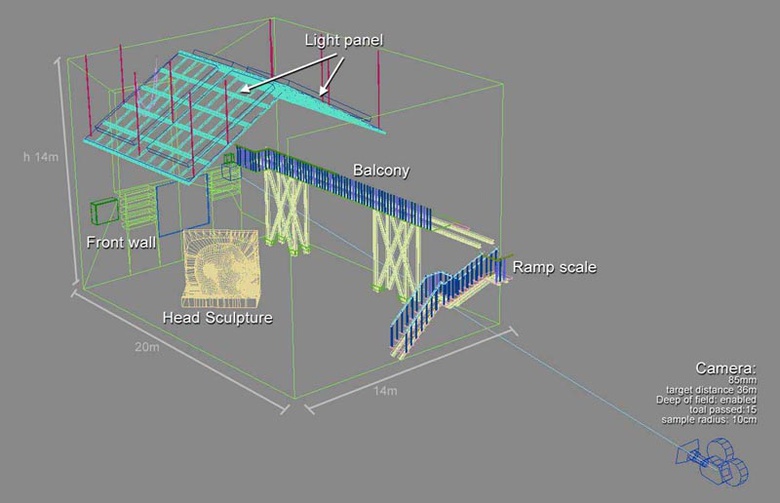 The scene consists of four essential components: the stairs and balcony, the sculpture, the illumination and finaly the complex texturing.
I don't want to go into the modelling here, but you can have a look at the setup of the scene, if you like. Many of the textures I used in this scene came from 3D Totals' TotalTextures CD's. One of the things that I found very useful in this texture collection, is the assortment of Dirt Maps.

You will see how Dirt Maps can increase the realism in your scenes as you go through this tutorial. Let's jump right into texturing the scene then, shall we?Â 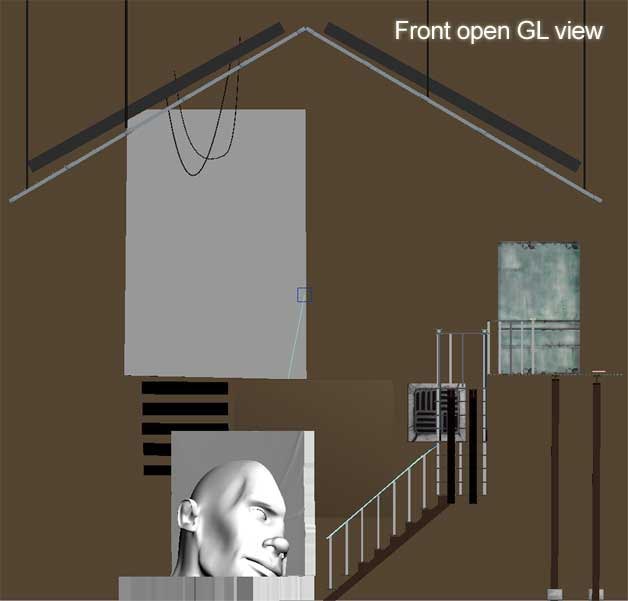 In 3D Studio MAX I opened the front view of my scene and pressed "Print Screen", to copy it to the clipboard. Then I started Photoshop and opened a new file by pressing "Ctrl-n". Then, presssing "Ctrl-v", I copied the clipboard's content into the new file. I cut off the unneccessary parts, which left me with what you can see on the left.

Then I began browsing the TotalTexture CD's. I was looking for some concrete and some brick textures to put on the walls. I blended them over the frontview and adjusted them until they fitted perfeclty. Photoshop's "Burn"-tool is perfect for adding effects to the textures that - allthough they can be very subdued at times - are noticable in your final image. You can add shadows, where objects meet or around cracks and dents, put stress on a special area of your scene and so on. But remember, it is easy to overdo, so be careful with it. It will be a very good friend, if you are. 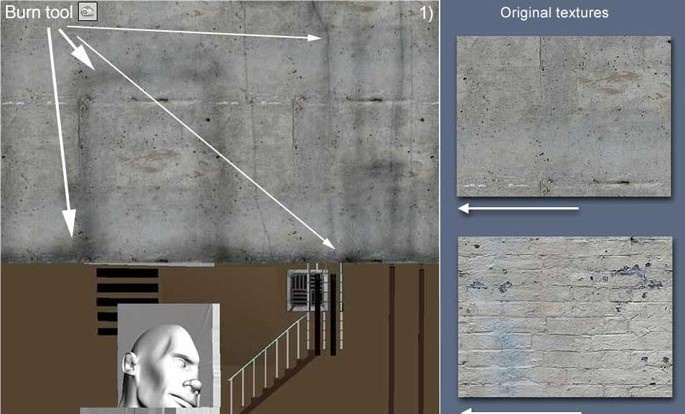 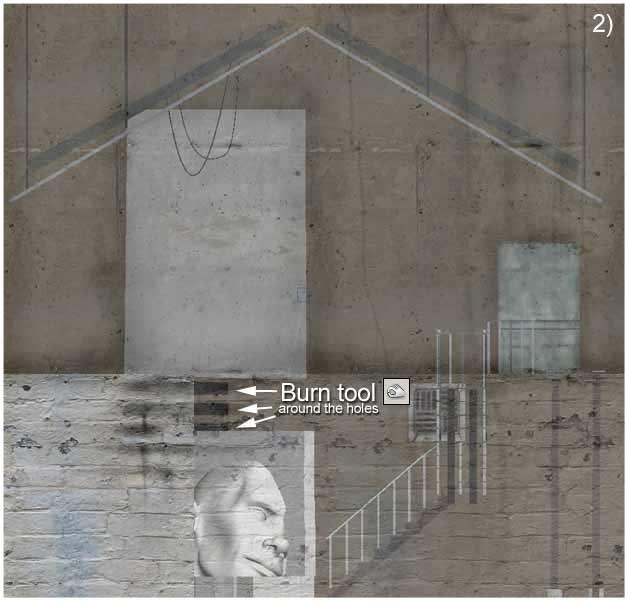 Front view with all textures

On the left you can see the front view with all textures blended over. They are good, but even though I have burned the textures here and there, they still lack this special "je-ne-sais-quoi". And this is where TotalTextures' Dirt Maps kick in!

I chose a slightly different method for this scene, though. I picked two of the various Dirt Maps from TotalTextures and blended them over the texure maps. This is a more faint way of "messing up" your tidy textures, but it works just as well.

To do that I opened the Dirt Maps, I had previously picked and copied them into own layers. One layer for each of the two maps. I arranged the layers so that the dirt maps sit above their respective texture maps (down_dirt above down_brick_wall, up_dirt above up_wall - see image on the left for details). Over the upper wall's concrete texture I blended a subdued speckle. The layer settings were 100% and the mode was Multiply. The lower wall's brick texture was partially covered up by a somewhat stronger dirt map. The layer's Opacity was 85% and color burn the mode.

On top of all of these maps I placed another texture representing the door in the upper right of the final image. I applied Drop Shadow and Bevel and Emboss effects to it. Take a look at the final image - doesn't the door look as if it was modelled? Well, it wasn't. :) 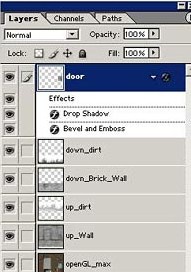 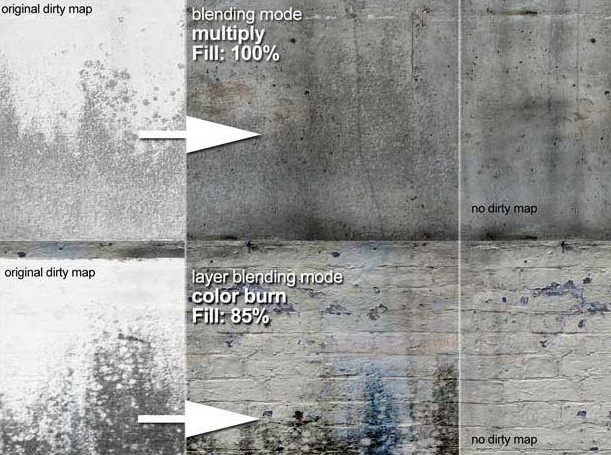 Proceed to page two, to learn about the illumination of this scene. 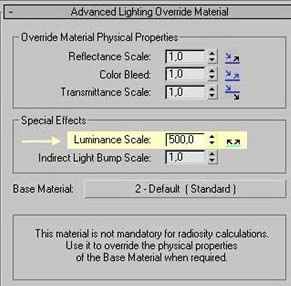 Now, we will have a closer look at the way the scene is lit.

It might suprise you but there is neither a single standard light nor a photometric light in the scene. The only lightsource is the panel at the top. That the objects in the scene are still nicely illuminated can be achieved by applying an Advanced Lighting Override Material.

As you can see on the screengrab, I put in a Luminance Scale of no less than 500. However, I suggest to try out other values, too. By doing so you will definitly find a setting that suits you as well as the scene you are working on.

I assigned a Gradientmap to the Self-Illumination slot of the panels texture. This results in a very strong and bright colour for the panels in the ceiling, leaving us with a contrast that is just as strong. 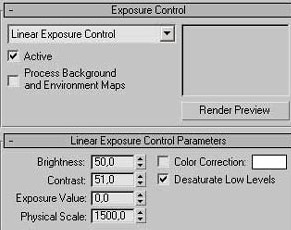 MAX's Linear Exposure Control will grant a correct illumination of the models in your scene.

Finally, a glow effect on the panels and little bit of noise round off the image.

Perhaps, next time you create an image of your own, you will try out what I have told about. :)

Thanks for joining me in this tutorial, I hope I was of assistance.