The making of 'The Harpy'

I currently work as a Creature FX Artist at Framestore in London. I have also worked as a Freelance Concept Artist on live-action and feature films, TV series, commercials and games/interactive media

This tutorial will run through the steps I took to create The Harpy; a creature inspired by Ancient Greek mythology. I worked on this ambitious personal project with the goal of learning ZBrush; also to gain a better understanding of anatomy and material definition. I wanted the harpy to not only appear gluttonous and conniving but also alluringly beautiful and graceful – referring to mythological beliefs that Harpies would seduce people only to steal the food out of their hands.

I will briefly cover the initial modelling phase, creating the feathers, refining the details and compositing my render passes to complete the final images. I hope you find this tutorial helpful!

I had a strong and clear vision of how I wanted this creature to look, my primary goal was to learn how to translate my mental imagery into a believable digital sculpture using ZBrush. I started with sculpting the head because I felt the face would be a good place to start to set the mood of the piece and from this develop a design language I could use throughout the rest of the creature's body.

I tried to exaggerate and merge the rounded forms of an older lady with the round features of an owl, but this didn't communicate my idea very well - I wanted the harpy to resemble a bird of prey but it looked too creepy and cartoonish. I studied the head structure of eagles; sharpened the harpy's features, deepened the brow and pinched and pulled on her nose and mouth to imply the form of a beak.

I used symmetry to block in the initial features for the final design, then deactivated it to add some subtle asymmetry to the face to make it look a bit more natural and not too obviously computer generated.

Progression of the Harpy head design

Blocking out the initial form

I used ZSpheres to block out the body. I did not plan to unwrap and texture the Harpy because I wanted to play around with render passes and colors in Photoshop instead, so I jumped right in to posing the creature straight away.

ZSpheres provided a lot of flexibility to the design and I was able to make quick changes to the placement of limbs with ease. I used the anatomy of harpy eagles, swans and owls to emphasize the bird-like features of the creature whilst also using reference of women's anatomy to blend in more human characteristics.

Once satisfied with the pose, I turned the ZSpheres into Polymesh and used ClayBuildup, Move and Smooth brushes to develop the forms before adding subdivisions and refining details. I also felt that including softer, light feathers would cast a nice contrast against the more solid forms of the body and plinth; to breathe a bit more life into my project.

I had recently visited the Rodin exhibition in Montreal's Musée des Beaux-Arts and was awestruck by his beautiful marble sculptures. I felt that the properties of marble would be a great material for me to practice mimicking in my eventual Photoshop composite.

I blocked out very simplistic wings in ZBrush to mark the direction that the feathers would grow, then imported this mesh into Maya. I then created some low poly feather placeholders based on research of wings, to make it anatomically believable. The wing was then reimported back into ZBrush as a visual aid to where my final feathers would go.

The harpy is infamous in Ancient Greek legends for its snatching and stealing of food. I wanted to explore this idea in terms of her design very early on. I felt that a creepy feature of her hybrid biology could be that her clawed bird feet are actually old, calloused human hands, and her talons are actually very long nails.

I also decided that I would give her a plump, flabby appearance. I hope that the exposed stomach, with feathers growing from her skin, is not very nice to look at, whilst her wings are graceful and alluring in contrast. 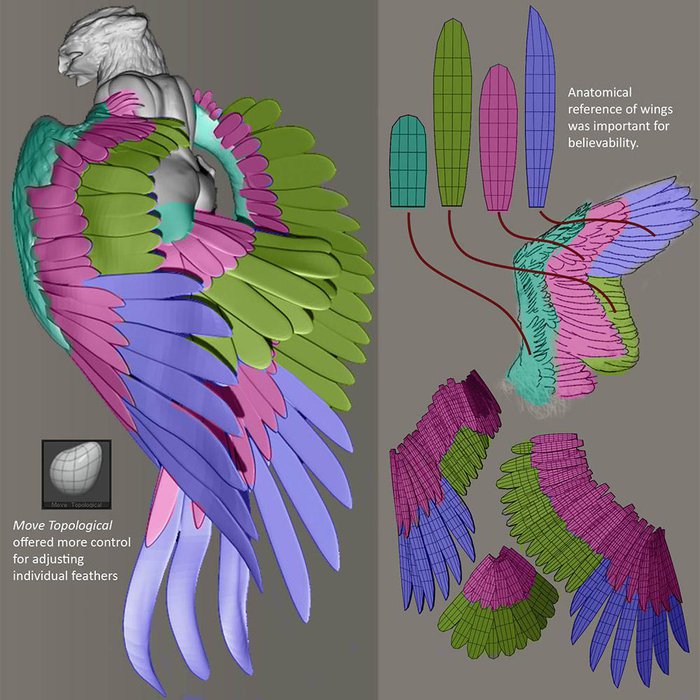 Creating the feathers on the body

For this section of the project I referred heavily to Pablo Munoz Gomez's (Pablander) guide on how to make feathers in ZBrush, it involves using a FiberMesh method. This project would not have been anywhere near as successful as I had hoped without his guidebook - so I am extremely grateful that he has shared this knowledge.

I strongly recommend you go and check out Pablander's website for yourself!

I first began by masking out the area on my mesh that I wanted to be covered in feathers. I then previewed how this would look under the FiberMesh settings and set the coverage to very high so that the fiber would be large and flat. I altered the width profile graph to set a custom shape for the fiber to follow, allowing me to plot out a feather shape. I then made further adjustments to the feathers covering my masked selection with the various sliders. I needed to repeat this step for individual SubTools because the head needed a different type of feather coverage than the back or chest did. 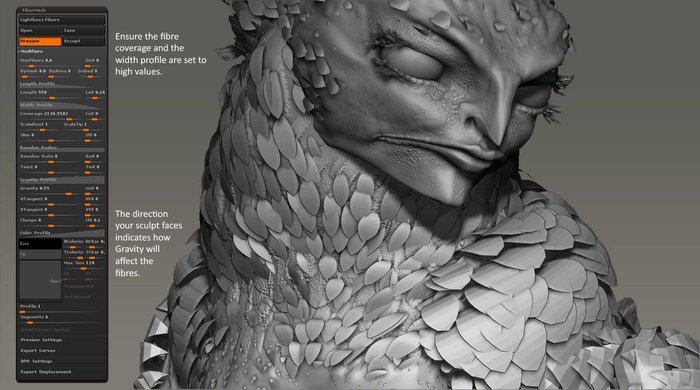 The initial FiberMesh settings used for applying feathers to the body

Creating the wings and tail feathers

For the much larger feathers I actually created a whole new SubTool, instead of masking out an area as I had on the rest of the body. Using a cylinder as a base, I isolated sections of it to group individual sets of polygons. I then masked opposite sides of the cylinder to grow FiberMesh from. Grouping polygons allowed me to then separate out my FiberMesh into sections and create a more realistic feather with ZBrush's groom brushes. (This is also a technique I learnt from Pablander's guide, please go check out his amazing work!)

The resulting feather was very high poly, but I was only going to be using this mesh for rendering purposes so I did not spend time optimizing the mesh.

I made 4 versions of the feather and duplicated the ones that I needed to create an entire wing. I could insert the feathers over the guide mesh I had made earlier in Maya. The feathers could then be further manipulated in ZBrush with a combination of the Groom brushes, Move and Move Topological tools.

I really love the plume of feathers that harpy eagles have at the back of their heads, so I adopted that into my design as a way of integrating a flowing, graceful and feminine arch to her profile.

Progression of how the larger feathers are created

Final stages and creating the plinth

Throughout my project I referred back to research I had conducted on Rodin and Michelangelo's sculptures in marble - to analyze how the material appears when raw or carved. I used a primitive cube and the Move brush to manipulate the basic form of the plinth, then subdivided to sculpt in the details.

I used the Fracture brush as a quick base, then applied more detail with Rake, smoothed the forms with SmoothValleys and dug back into it with DamStandard. I also used the Planar brush to flatten the edges and Pinch to refine the silhouette.

I had left the tree as the last piece I made because it was not as important as the silhouette I wanted my Harpy to create, so it was fine to move the tree about to accommodate for the Harpy's feet. It was firstly planned out with ZSpheres so I could create a knobbly, crooked form with this tool before committing to PolyMeshing it. It meant that I only needed to move the Harpy's claws slightly to give her a more believable grip on the tree trunk.

I created the branches with FiberMesh in a similar way to the Harpy's larger feathers. Making the initial fibers longer and with less segments gave the fibers a jagged look. The smaller branches could then grow from this with similar settings. I used Greek olive trees as a point of reference; these trees can appear twisted and sparse, and it fitted in perfectly with the Greek mythology theme. 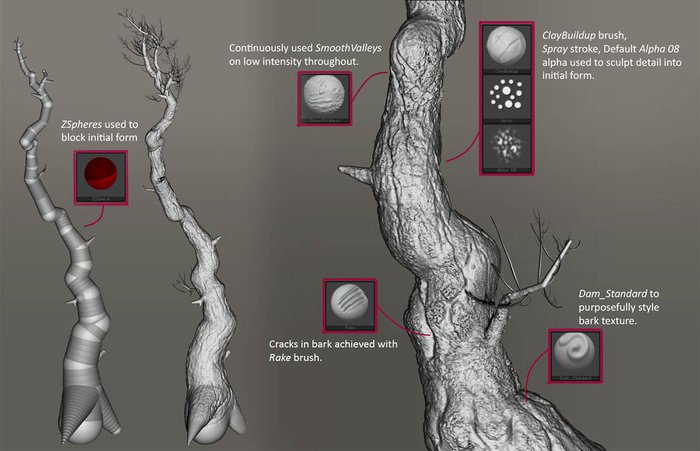 Sculpting details on the tree

As this was my first time using ZBrush in great depth, I referred to Andrew Smith's brilliant and very comprehensive video tutorial about rendering in ZBrush (http://www.artbysmitty.com/) for this stage of my project.

Once I was satisfied with the look and texture of the sculpt, I opened up the BPR Render options and my Light options. I made sure my model had the grey BasicMaterial applied to it and that all of the fibers were double sided in the Display Properties for each SubTool.

I centered the lighting and saved out a Light, Shadow, and Ambient Occlusion, Matte, ZDepth and Sub-Surface Scattering pass. I would be able to use the matte pass to apply layer masks to the entire model to separate it from the background, however I would also need to create masks for separate parts of the model for a higher level of control when editing. So I assigned different colored Flat Color materials to each SubTool and rendered out a Clown pass.

I then positioned the light to face the left side of the model and re-rendered. I only needed my light pass and shadow pass now. I then repeated this for the right, top and bottom of the model. To make the rim lighting I repeated this action but placed the light behind the model for each pass instead. Taking multi-directional light passes would give me a huge variety of lighting situations to play with in Photoshop.

I also needed to create a reflection map using the Reflected Map standard material to help me to define the more glossy areas of the model from the rough parts. Marble is a very versatile material which can be polished to look like skin, and I wanted to emulate that in my design. 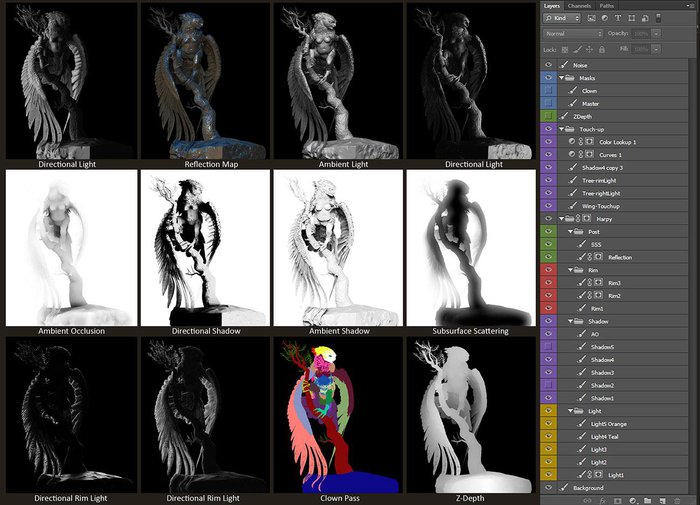 The render passes were composited within Photoshop

For the final composite images I took the lighting renders and the reflection pass and set them to the Screen blending mode, and set the shadow/ambient occlusion renders to Multiply. I grouped the layers so that I could quickly turn them on or off to decide which lighting setup would best show off the design of the creature and the material definition.

I could then use my clown mask to select areas I wanted to further adjust with a bit of artistic license. I also selected the tree trunk in this way to darken its overall color to further distinguish it from the creature.

For the final touches I applied a Color Lookup adjustment layer with a slight burnt umber hue to place some warm, earthy tones into the composition.

I used the Z-Depth pass with Photoshop's Lens Blur feature to apply depth of field. To piece together the background I created a Color Dodge layer with some hand painted random dots, reduced opacity to under 10% and blurred it to make faint dust specks. This was placed under a black filled layer with a lighter gradient where I believed the light would be coming from realistically.

The way in which I rendered this project meant that I had a high range of control and artistic freedom to manipulate the image in whatever way I wanted. This however meant that my understanding of realistic lighting became even more important. I needed to ensure that my lighting was natural and accurate - as if I had lit a real sculpture. I enjoyed the challenge of compositing my passes in Photoshop and learned a lot about ZBrush and its versatility.

Looking for more tutorials? Rummage through our tutorial pages

Katie has also been featured in 3dcreative magazine, grab your copy here