The making of Sixteen

Appeal was the main goal when developing this character, from a concept by Chabe Escalante. When sculpting 'Sixteen' I wanted to create a cartoon looking character that would feel alive, even on a static image - you look at her eyes and she almost speaks. The project started as a class assignment; I (Eiti Sato) completed modeling and the hair and textures were done by Victor Trovato.

Picking the right design is one of the most important steps. If you are aiming for a portfolio piece, then you will probably spend a few weeks working on it, so make it relevant. Think about what the goal of the project is. Getting a job at a particular studio? Then pick something similar to what they do there. Or maybe getting more followers? Then fan art may be a good idea.

A big point for making an appealing character, is having a story behind the character, even if it's just a still image with no scenario, you still should be able to tell who this character is, and all the credit here goes to the character designer who created the concept art.

I chose this character created by Chabe Escalante as my concept

Now you have an amazing concept piece from a great artist, you have to do it justice! Whenever you do something based on another artwork, people are going to compare the results, so you better get to a similar level of quality of the original or, if possible, improve it.

Start by breaking down the drawing into pieces, planning how you will handle the model. And pay a lot of attention to the silhouette, negative spaces and all the design choices that the 2D artist made when creating the character, this is something very overlooked or even unknown by many 3D artists - more on this later.

Preparing my plan of action

ZBrush is my tool of choice when sculpting, but you can use any sculpting software like Blender or 3D-Coat. On this first stage, you should just get some basic forms for each limb and establish the proportions, keep it simple and clean. No details, it's just the base where you will carve the character out later on. I usually start just with spheres and cylinders. 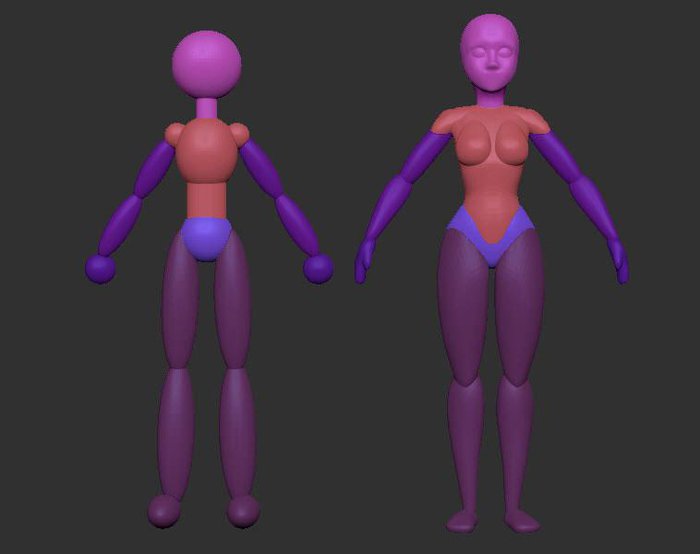 Start with simple shapes and then adjust the proportions. Keep it simple

Base prepared, now it's time for the concept to start showing through. The drawing will only give you enough information for the general design; it's your job as a 3D artist to make it look great from all angles. For me, the most important skill for a sculptor is understanding the form. If you take an arm as example, how it looks from front view? And back? And side? And from above? Imagine if you touch it, does it feel like an arm or something all crumpled? Get some reference and keep rotating the model all the time. 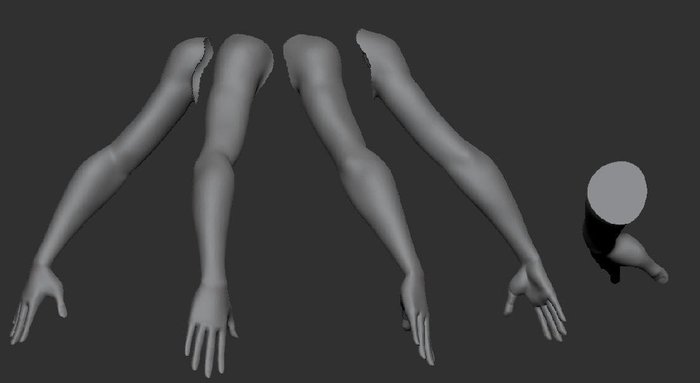 It`s not enough to just match the silhouette from a single view, it must work from all angles

Storytelling is the first step to an appealing character, the second is to use the forms to guide the viewer's eyes. Curves, straights, negative spaces, silhouettes, simple vs complex, are all design elements used by concept artists to make interesting and harmonious designs, but are neglected by many 3D modelers. Just matching proportions and colors isn't enough, the design choices made by the concept artists is what will create a beautiful composition and guide the eye of the viewer. So be sure to translate them to the model and don't forget - it must work from all angles! 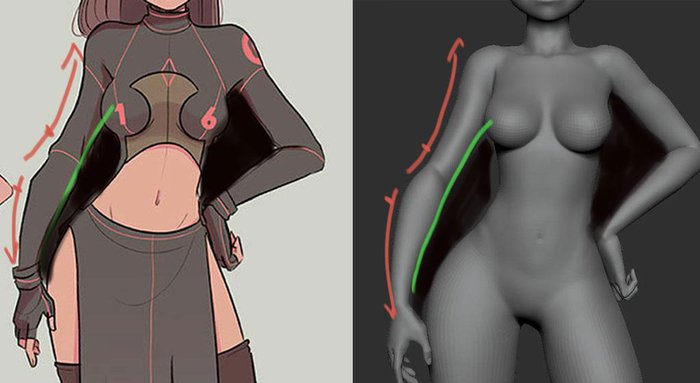 Translate the lines into 3D

The face is the most important part of the character for me, it's where I want to keep the viewer's attention. Steps are the same as for the rest of the model, I start with simple sphere for the head and other small spheres for the nose and ears, and tubes for the eyelids. After I adjust their proportions I merge them and start shaping the forms. It's important to keep the face elements in harmony and working together as a single piece.

Pay attention to how the elements interlock each other

Hair is like the frame of the head, it also changes the silhouette of the character. It's one of the parts that I spend most time on. Even though this character will have real hair on the final piece, I still do a sculpted hair so I can check if the general model is working and to serve as a reference for the grooming. And it's good to present a complete model. I start with a simple mass to give the silhouette, then using a curve brush created by Dylan Ekren I start putting the hair stripes together until I have all the hair filled. It's important to pay attention to the flow of the hair.

Much of the character personality will show through the pose. For a turntable, I prefer a subtle pose that will display the model well, instead of something dynamic with a lot of action. Again, it should read well from all angles, avoid parallels and keep an eye on the negative spaces. For posing I like to do a quick rig in Maya, it makes my life so much easier, especially when posing the hands. 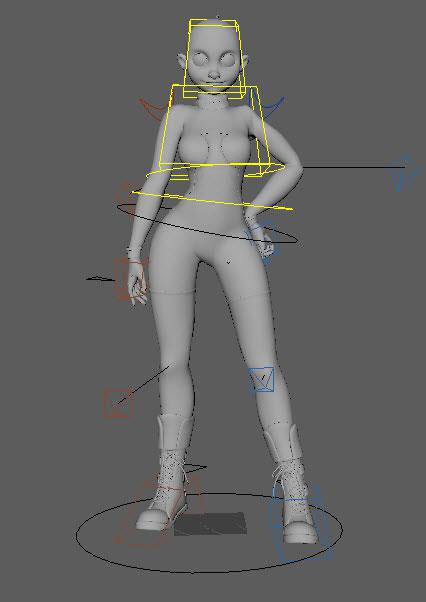 A quick autorig serves well for experimenting with the pose

Take a break away from the model, come back with fresh eyes, and ask for someone's opinion.
Check your lines, how your forms are reading, if the proportions are correct, clear any deformation from the posing, polish the surface quality (make sure there is no unintentional crumples). On this step I spent many hours, constantly rotating the model and making small fixes here and there, until I think it is good enough. And the sculpting is done!

Turntable of the final sculpture

Victor Trovarto then finished up the piece by completing the hair, textures and the final render. 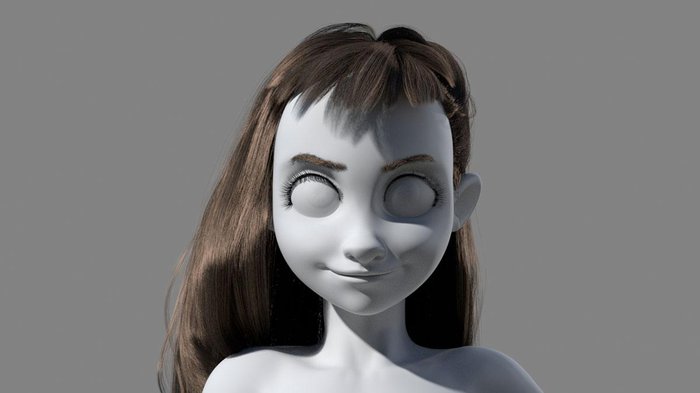 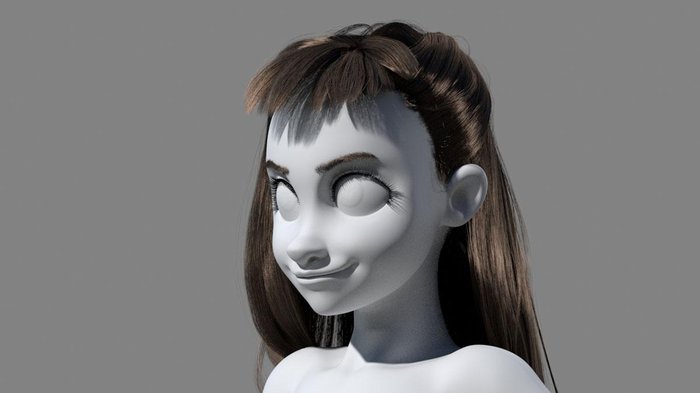 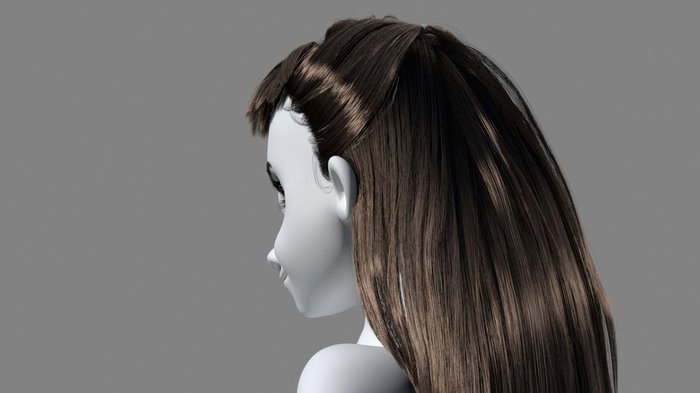 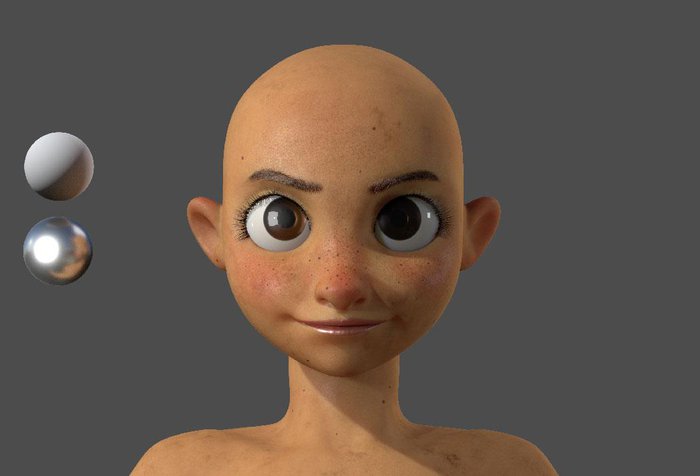 The skin was painted in MARI, doing a fast test with AIshaders 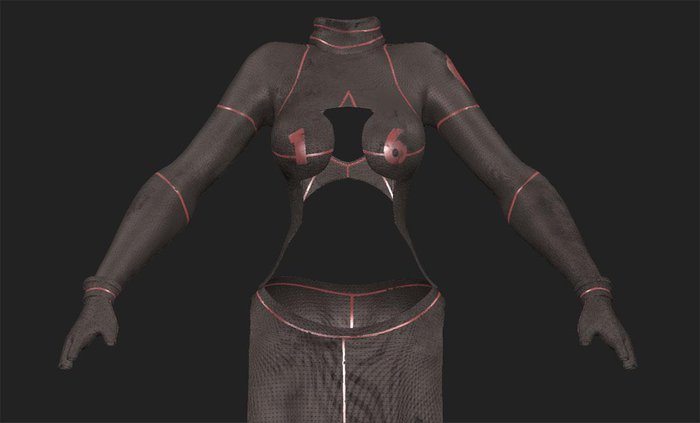 The clothes and accessories were also painted in MARI 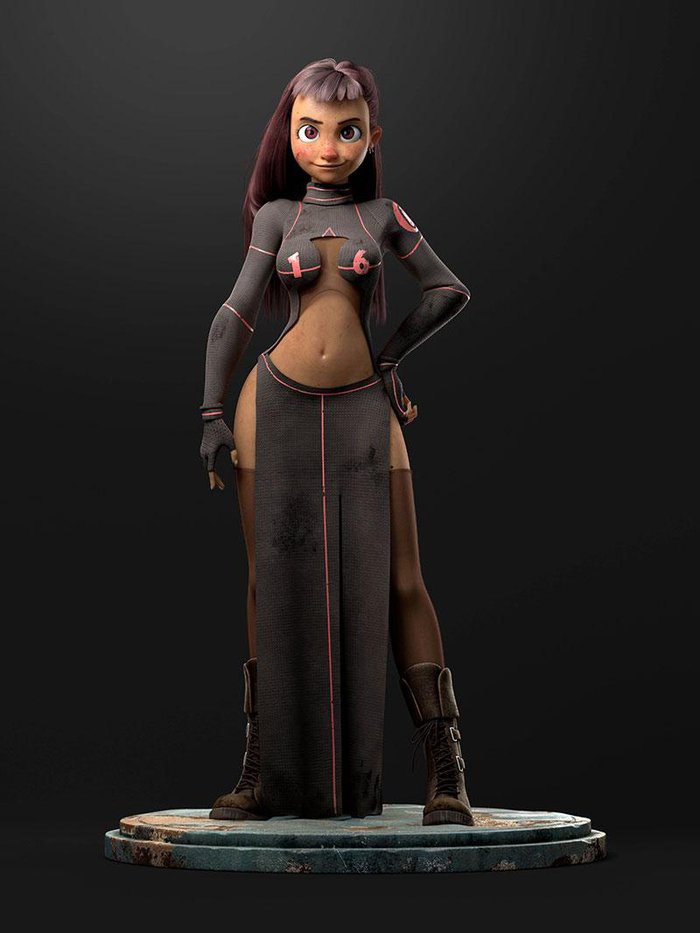