The making of ‘Sacrifice’

Peter Braeley demonstrates how he followed the basic rules of principles, perspective and shapes to create his image, Sacrifice. 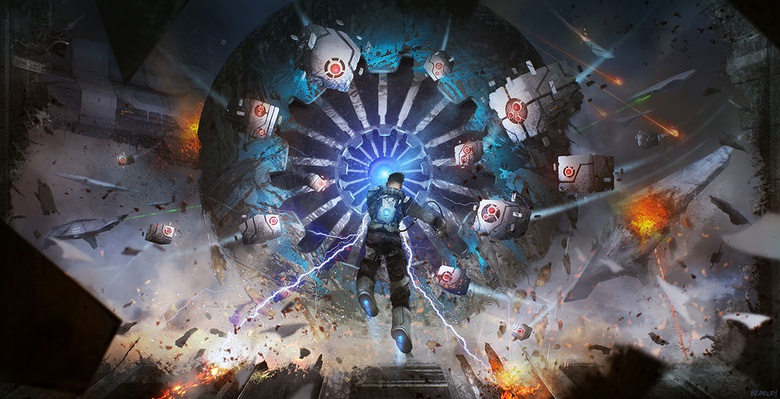 Peter Braeley demonstrates how he followed the basic rules of principles, perspective and shapes to create his image, Sacrifice.

Sacrifice was a quick idea from a thumbnail sketch that I painted in really roughly, it stood out of the page from the rest of the thumbnails I drew that day and it kept my mind racing with all sorts of ideas and potential, which I like. I always enjoy watching action and sci-fi movies and this was my inspiration for this piece, creating an action scene or a pitch idea. The direction I had in my mind was a foreground interior of a ship exploding to reveal this scene of an all out battle of man versus machine or some sort of organic alien life form from the machine.

From here I will be discussing my idea, from painting, breaking the piece into background, midground and foreground. I will go through the process of simple shapes, painting, different ways of texture techniques and brushes. Then looking into the whole image and working on atmosphere, lighting effects, smoke and fire. Then adding some finishing touches to the scene and some cropping for that cinematic feel.

I was going through my daily thumbnail paintings and started painting away. I started off with very loose big shapes, focusing in on the center of the image with a sphere and character. Again I knew that this is where the center of attention is going to be and how that is going to affect the rest of the image.

I didn't spend a lot of time on this thumbnail; honestly I was already jumping into the next step because I was so excited how this piece was going to turn out. So I started blocking out the shapes and figuring out where certain objects and interests are going to play; just keeping things simple works well for me at the end. 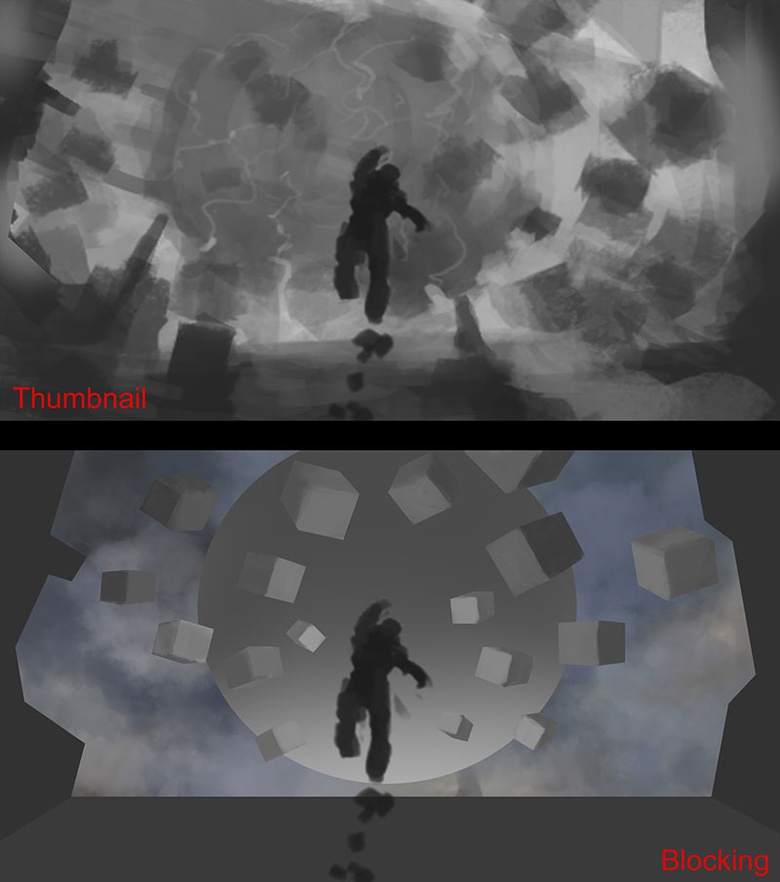 Here is the thumbnail and blocking part of the image.

Step 02: The plan, perspective and background

During the process of this step I wanted to the viewer to feel as if they were immersed in the scene, as if the camera was a third point of view and that the next second would be the aftermath of the story leaving the viewer on edge and wanting to know what would happen next. That was the set plan on this piece.

Then I laid out a simple perspective grid just to help me with the focal point and give a sense of balance and weight to the image. At first I had the idea of having a destructive city in the background and you're in an interior looking out, but it felt too busy for me so I added in ships to give a better sense of space and room for storytelling. 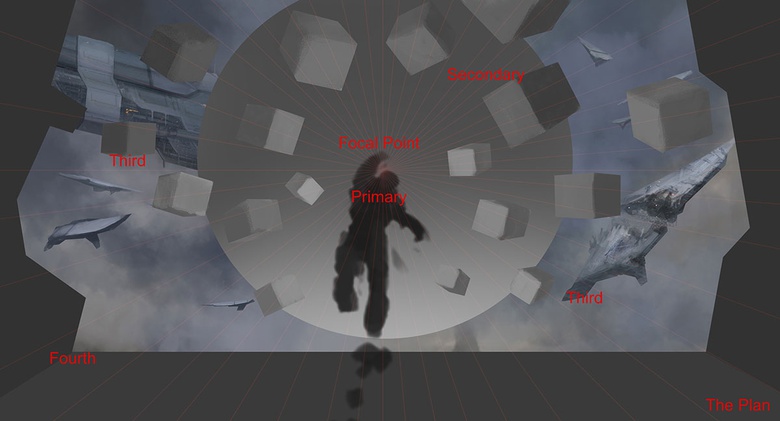 An image of the setup, plan, perspective grid and ships into the scene

Once I decided to change the background into this vast sky I added the ships to allow more attention on the centre focal point. I added some clouds, sky and painted in some fill color into the scene for believability, make sure it's not too empowering.

I painted the ships with simple basic shapes and some base painting. I added textures to the bigger and closer ships; some of the smaller ships had some sky fill pushing them back further into space. I also started adding some fire and debris into scene. This gave me a chance to add more drama and create conflict in the scene. I kept staring at the sphere and how empty it was, so it was time to move on. 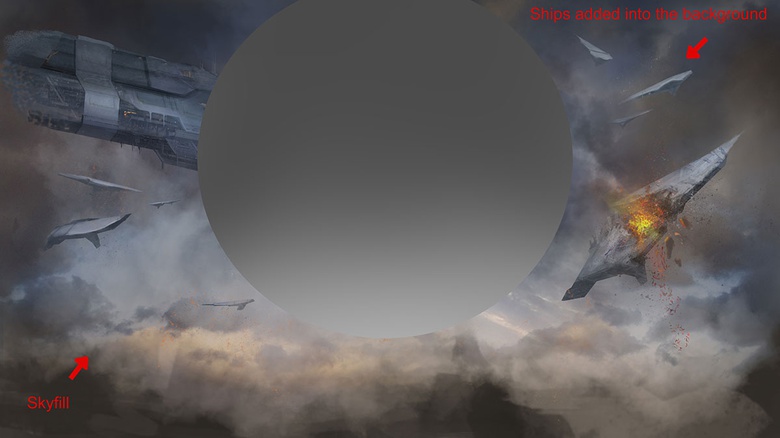 Here is an image of the background and ships

This was a lot of fun to do; I wanted the sphere to look like it was organic, gentle, yet mechanical and empowering. The first thing I did was fill it with a core shadow and light fill just to give it some depth. I started working on the outer part and inner center of sphere, adding a texture that gave me repetitive shapes and a mechanical look. I also duplicated the layer for the center as well.

I painted the outer rim with a teal blue color and added a gritty texture for the organic appeal; I also started masking out the sphere to make it look damaged and decayed. Then I focused on painting in the lighting effects to make it look alive and responsive.

Broken into four parts the making of the sphere

In this part I wanted the cubes to be a warning system that protects the sphere, like a swarm of bees protecting their queen. I started masking out the edges then I began to fill dark and light colors and some tech lines integrated into the body for that mechanical design.

I dive into them further with paint textures to give some grit and believability; I had to design the front of each cube to give them different personalities but so they still feel as one unit. Lastly I focus on lighting and painting in red eyes for that alert look and I made a choice to remove some cubes as it was getting overwhelming and busy. Then extra bits of detail were added to push that organic feel. 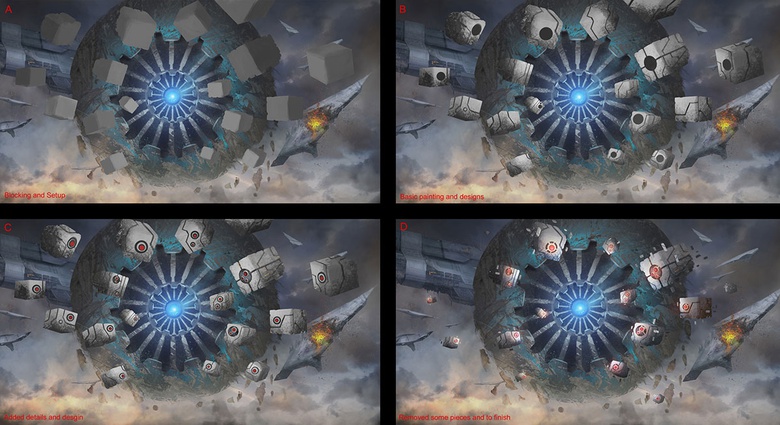 The making of the cubes broken into four parts

I decide the foreground would be an interior part of the ship for our big epic conflict with the sphere drawn in by the ship or the character.

I started working the ground making sure the perspective was correct. I laid down some flat color using the Polygonal Lasso tool to make the shapes, painted in some dirty and grit textures and used the same technique on the left and right walls; keeping in mind not to over populate the interior to distract from the focal point. At the end I masked in the edges to break up the interior for that damaged and dirt effect. Flying pieces of paper and debris were added in as well. 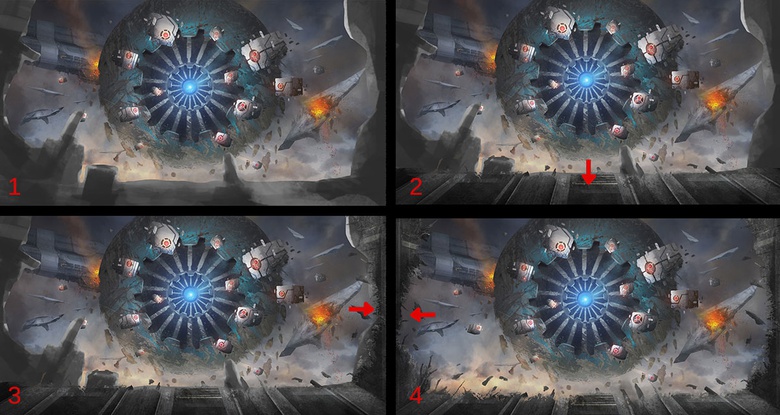 The making of the foreground in four different parts

The character was one of the last parts of the image. I painted right into it focusing on the shape of the figure. I then added some textures using a photo of a helicopter cockpit and clipped it inside the figures outline. Then I distorted it, flipped it and stretched it to look for interesting shapes for the suit to then paint on top. Then I worked on painting the boots, adding the jet pack light in the back and the arm as well.

I used a photo reference for the head and I painted the hair in with a grass single blade brush. I then painted in some touches ups with the lighting and fill color for the overall look.

The making of the character into five parts

This is one of my favorite stages of the piece because I get to see it all coming together. Once everything was laid in I went back to the background and started adding in lasers effects, explosions, fire, debris and atmosphere.

Then I moved on to the midground, adding in a smoke effect behind the cubed robots. Some extra attention was paid to the character adding dust particles and lighting from his suit, and burning the interior of the ground causing fire. This added more depth to the narrative.

I played with Color Balance, Brightness and Contrast, as well as adding a Photo filter layer and cropping the image to achieve a cinematic feel. Lastly I added a Smart filter for some edge details. 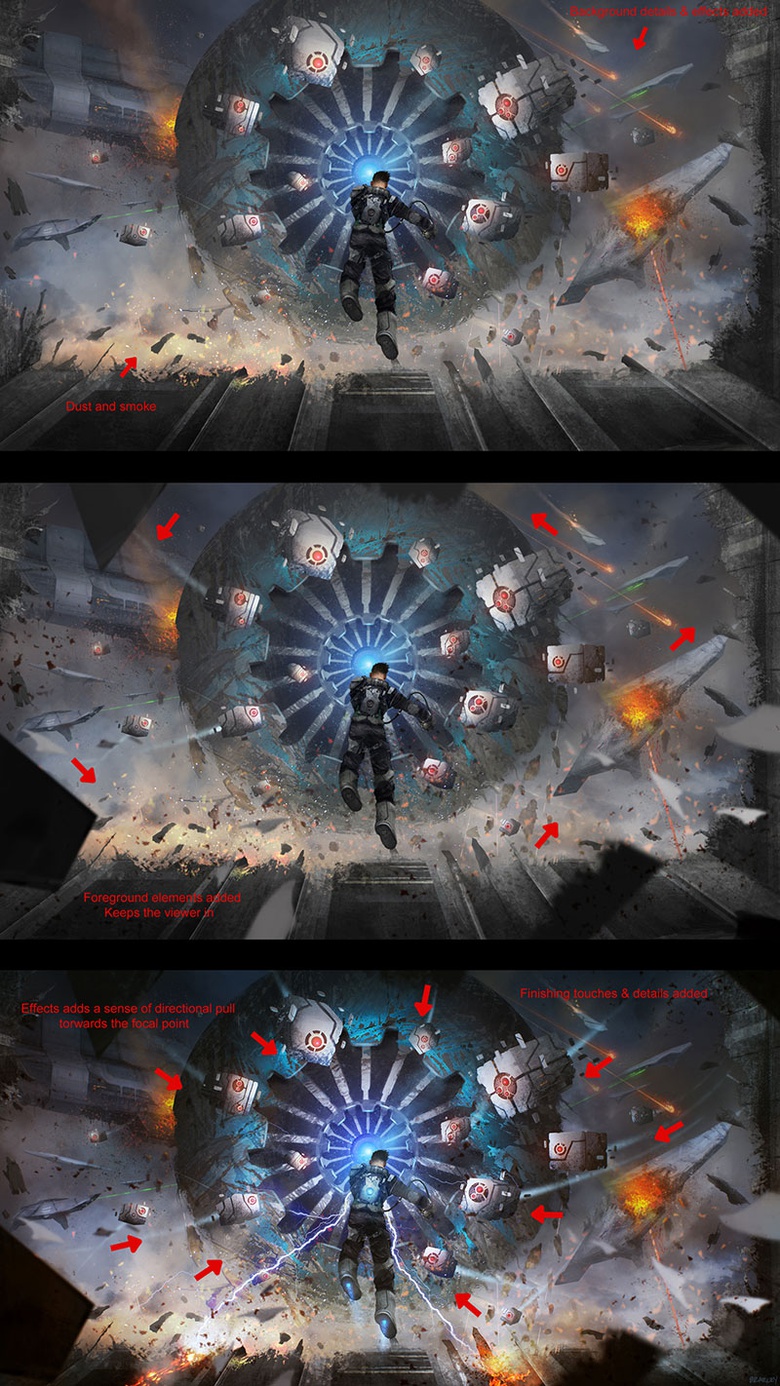