The making of Rosie – The Jetsons

Fagmario Rodrigues worked with Jonathan Post and Warner Bros to create visual effects for a Brilux commercial. Here, he gives us an insight into the texture, shading, lighting, rendering and compositing processes he used in this project. 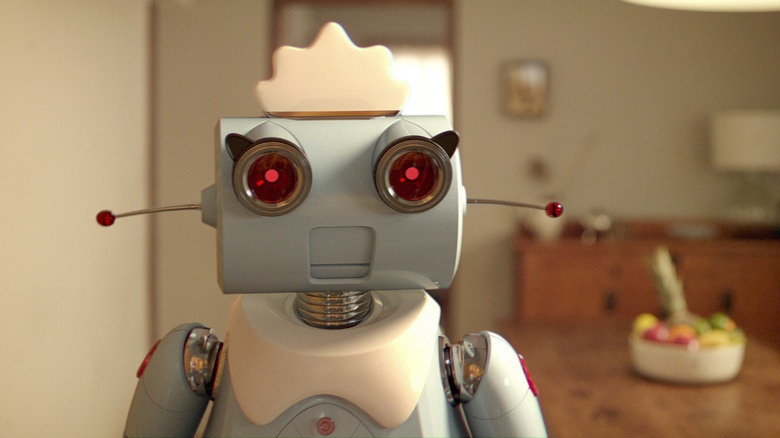 Fagmario Rodrigues worked with Jonathan Post and Warner Bros to create visual effects for a Brilux commercial. Here, he gives us an insight into the texture, shading, lighting, rendering and compositing processes he used in this project.

My goal here was to create a seamless integration of Rosie into the commercial footage. To achieve that, I tried to recreate all the physical light conditions of the scene shoot. A great HDR was taken, and we used Nodal Ninja Panorama so we could get an accurate reflection.

I then made a low poly version of the scene and used the Camera Map Modifier to project the footage as textures, setting up Rosie's physical reflections and shadows. Finally, I used some area lights, and added some final tweaks for a better look. The entire project was made in 3ds Max, V-Ray and NUKE.

We tried to make Rosie as simple as the original 2D animation by Nacho. Fabricio Torres used the box modeling process to add all the functional parts, such as the opening belly and stretching arm, for the base of the model.

Before we started the production of the model, we created a test scene to develop the look of the model with different shaders. I did some basic shading with VRayCarPaint to create the basic metal material of Rosie, and then threw on other shader basics, such as plastics, rubbers and chrome, just to see what looked good.

At the beginning there were many more chrome parts, but we thought it was too shiny, so we went more discreet.

For the lighting, I used an old HDRI that was made for other projects. 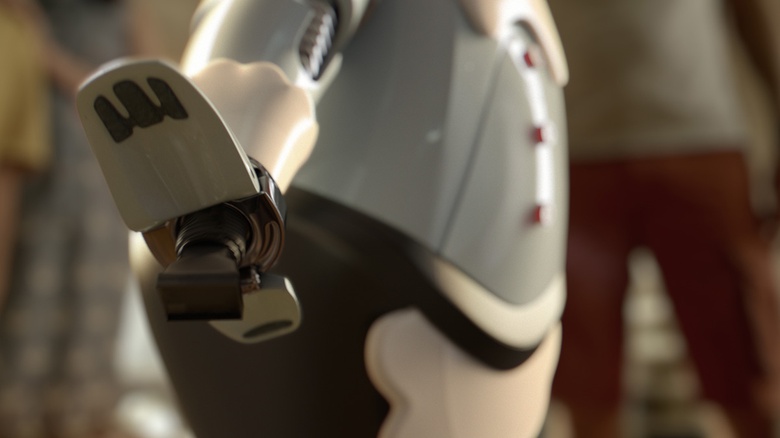 The basic shader here was done with VRayCarPaint

The client wanted Rosie to look clean, and in that way represent his product, so I couldn't make any damaged or dirty textures. I just did simple textures just to break a bit of the reflection.

In some chrome parts, I noticed that there were too many dark areas so I had to increase the Fresnel levels to almost white, to make the reflection look cleaner.

V-Ray has a powerful material that, with a little adjustment, allowed me to achieve nice, physically-correct results. 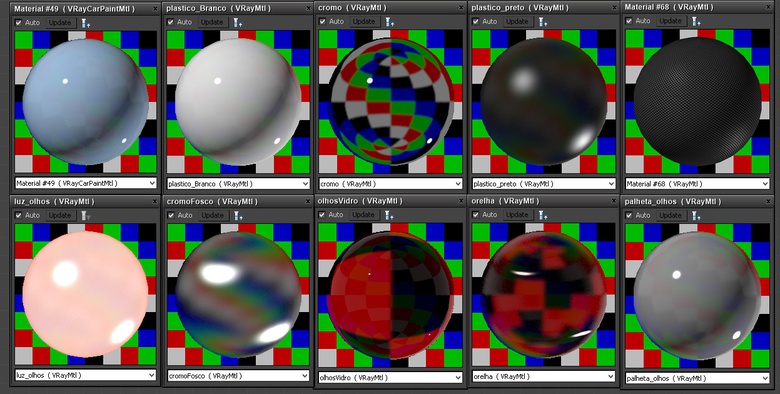 Some of the simple shaders used on the model

One of the most useful and powerful tools I used here is the Controller Bezier Float. This node has a number and you can apply it to several functions. For example, you can change the value of the offset tile and this value then applies to all other connected nodes. You will see several controllers when using 3ds Max, as seen here in this image. 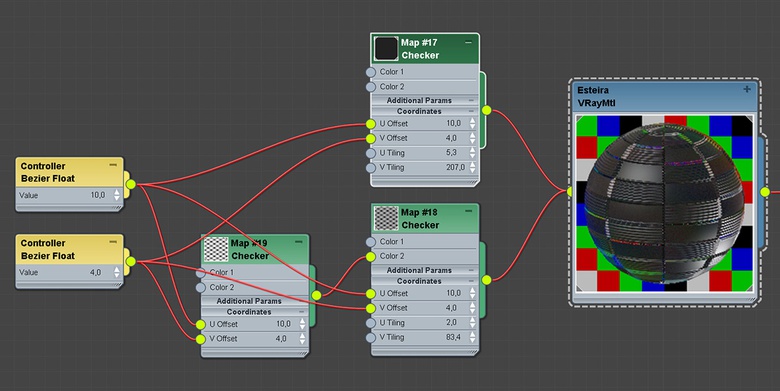 The Controller Bezier Float in use

HDR is very important when working on the base of light, reflection and refraction. I would say that today there is no other way to start if you are making real footage and using 3D elements. Rosie is fully reflective, and there are some close-ups, so in the model, I didn't use a chrome ball. We did a panorama, and ended up with a really high-res HDR for all the scenes.

In V-Ray, you'll find a map node called VRayHDRI, where you can load the HDRI file. This map allows you to choose the type of HDR you are loading; in my case it was a Spherical mapping. When it was loaded, I then adjusted the position of the HDRI in the viewport.

Normally in 3ds Max you'll put your map in the Environment map slot, but with VRayHDRI you have a better result and it's easier to adjust. There is also the bitmap standard in 3ds Max, but I would advise that you only load files with HDRI VRayHDRI, as again, it is easy to adjust.

I start the lighting with V-Ray dome light using a HDRI map. Usually I start with the HDRI and add an area light according to the environment. Here, I lowered the intensity of the Dome light and used ‘Spherical' (full dome). With this option I used HDRI as a full sphere.

I wanted to create a hotter and stronger illumination, so I added very intense area lights from behind, creating an almost silhouette back light. I used a 3900k temperature – though some areas needed to be colder, and others lit from the side.

The picture here shows how the environment affected the lighting. First, I looked at the main light source (green lines) and tried to reproduce it. Secondly, I added other area lights to fill the darker points (red lines). Third, I looked to the shadow angles and blurs (blue lines). A good illumination of the model is very important, but sometimes this is not sufficient enough to integrate the model with the real scene. 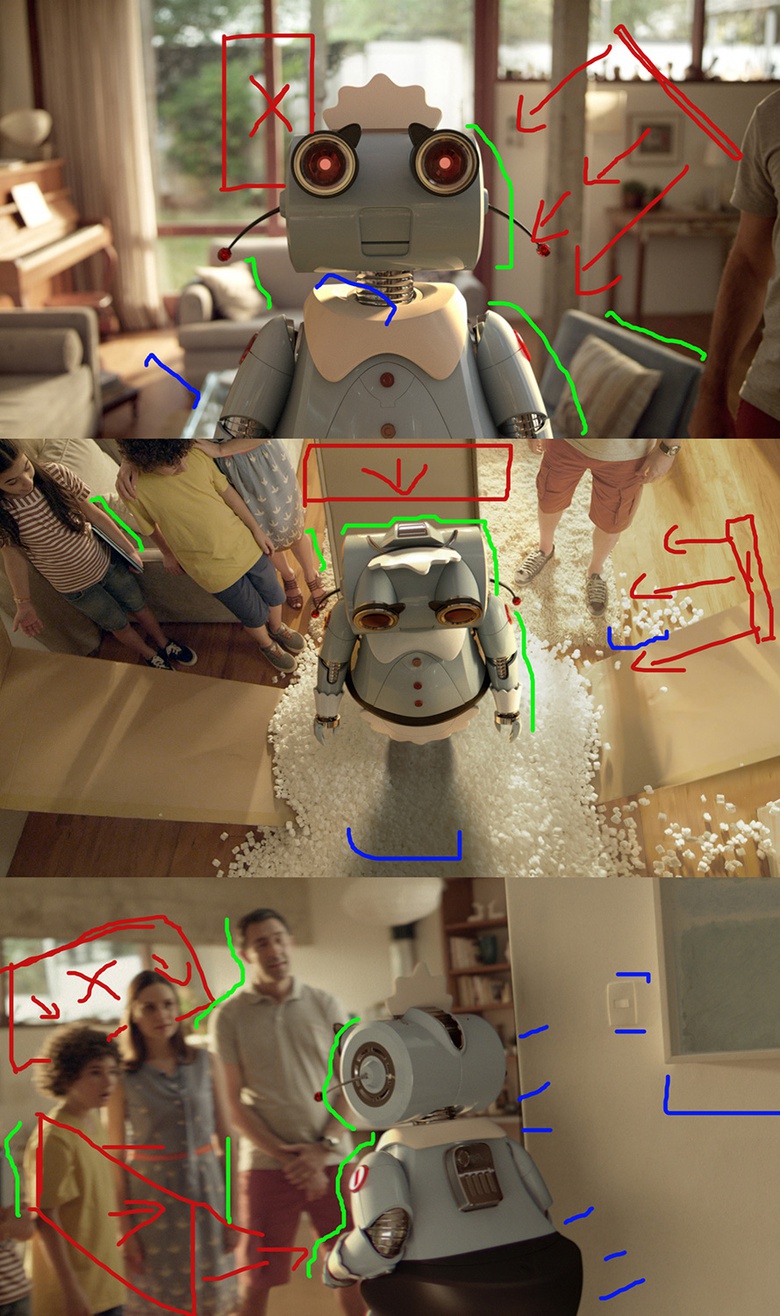 Some examples of the light placements in the scene

Working with the environment

I tried to model some objects for the scene in order to integrate Rosie better with the environment. The more details you create the more you will have in your render. 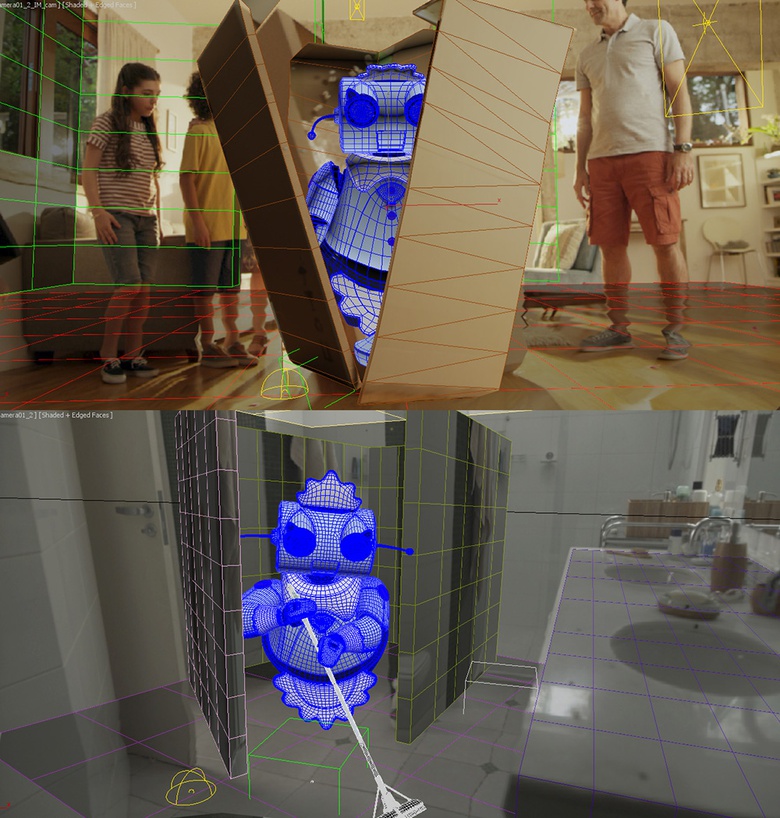 Projections in the viewport

The projections help you work with the GI bounces, and generate shadows and reflections. In this case, I used the cameraMap – you'll have better results painting in the UV, but you'll need to spend more time on it.

If you want quick results, you should only make simple models and apply materials with the texture of the footage. Remember to use V-Ray object properties too; it's really helpful when using projections. I used several parameters as seen here. 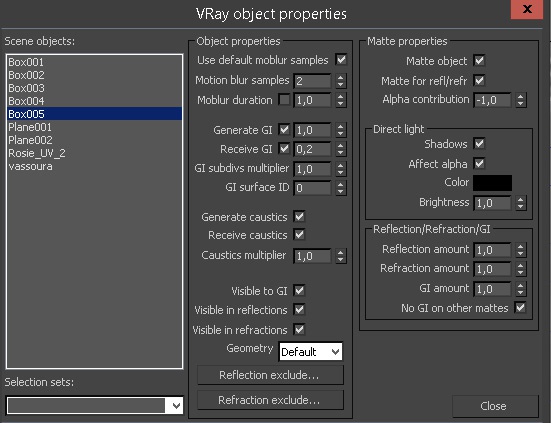 Showing some of the V-Ray object properties

For this simulation, I used the Pflow particles to simulate Styrofoam being pulled into the vacuum cleaner. mParticle allowed us to create collisions between the particles, and the Data Operator allowed us to pull them together. 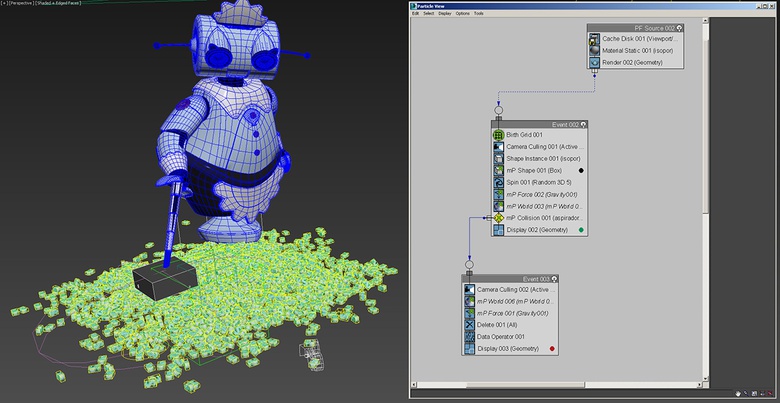 Settings in the Particle View window

That process covered rendering in V-Ray. Today we also have several other quality renderers such as Arnold, Maxwell, Renderman and Corona among others, but right now I prefer to use V-Ray. V-Ray allows me to adjust settings and make the render time slower to achieve a good quality render. This work needed to be done quickly, so I needed to render it fast.

I used the Global Illumination (GI) settings with the Irradiance Image as primary and Light Cache as secondary. Some tips for GI with no grain – If your camera has motion, you have to check that the Use Camera Path is active. Put a very low setting in the Current Preset and increase the subdivisions. You can then increase these gradually, depending on your scene. Generally, the Irradiance map generates the grain, and you can increase the value of the other settings by making the render time slow and not fixing the grain.

Something that is often confused in 3ds Max is the use of the background. Pressing the 8 key will open the Environment and Effects window, and you can put your footage in the Background and see it in the render and the viewports. In the bitmap node, choose the Screen mode to see it correctly. When you render your scene will have an overlap in your images. To get the correct preview in V-Ray you have to add a black color in the GI environment in the V-Ray rendering window. You can also replace the reflections for your HDRI – remember to disable the dome light if you use this, though. 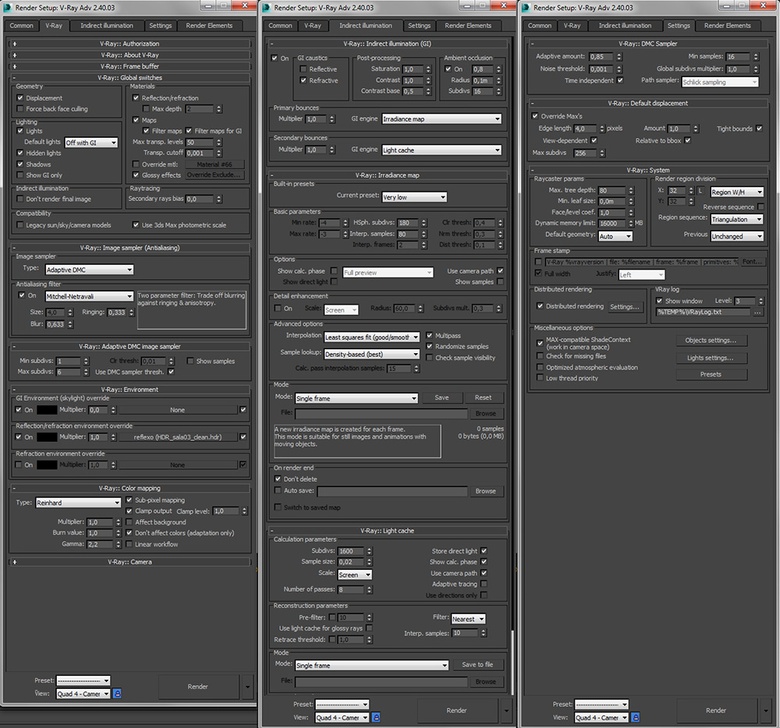 I always do a basic composition to test the render, and then some color correction study to integrate the model with the footage. This is very important – you'll only see what you need in the render, with the composition.

Render passes are always very cool. You can tweak many things like the specular and reflections without re-rendering the whole thing. To create a mask with perfect edges, you can make a render element with RGB. 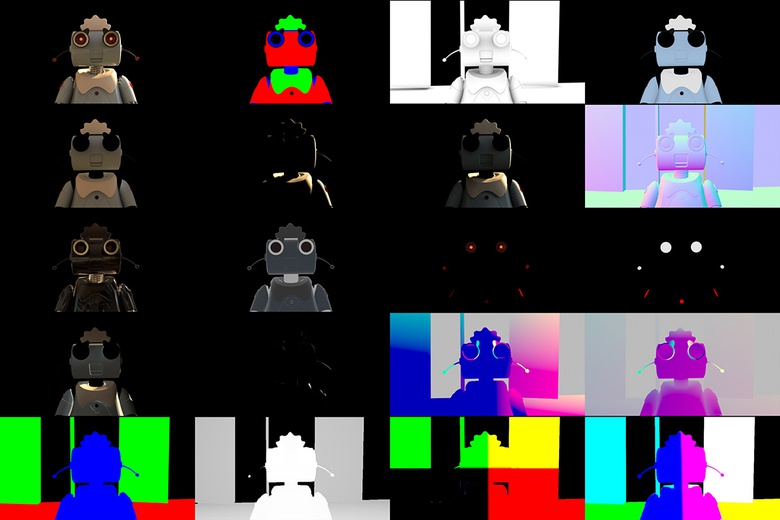 Some of the render elements used in the compositing stage

Thanks to all personnel from Jonathan Post and to 3dtotal for the opportunity.