The making of Happy Birthday!

We are delighted to bring you the making of the incredible 3D image, Happy Birthday! by Lin Zhang, created using Maya, 3ds Max, ZBrush, V-Ray and Photoshop. 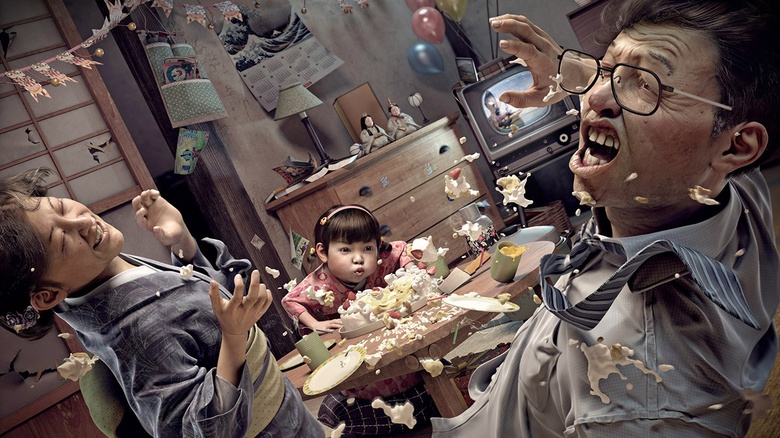 We are delighted to bring you the making of the incredible 3D image, Happy Birthday! by Lin Zhang, created using Maya, 3ds Max, ZBrush, V-Ray and Photoshop.

Happy Birthday! was inspired by the memories of my childhood. I was always a troublemaker for my parents when it came to birthday celebrations. For this image I decided to use Japanese and US comics as inspiration for extraordinary and exaggerated expressions, and as a reference to create a believable-looking image. I hope this image reminds people of their childhoods and of the colorful lives we lead.

Firstly, I spent a lot of time collecting references and figuring out the composition. This was a big step, although I see so many people ignore it. It's during this stage that the more well-prepared you are, the better chance of a success you have – it's much like building a solid foundation for a great construction. 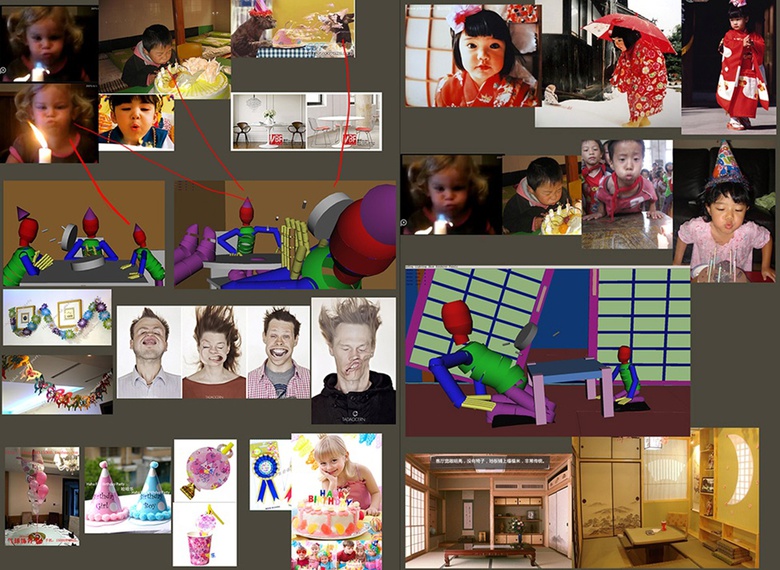 After establishing the initial composition, I made some simple models for a lighting test to so I could gauge the overall atmosphere. I then adjusted the camera's position to determine the composition.
I continued to adjust the camera during future stages, so this was just the first level of adjustments. 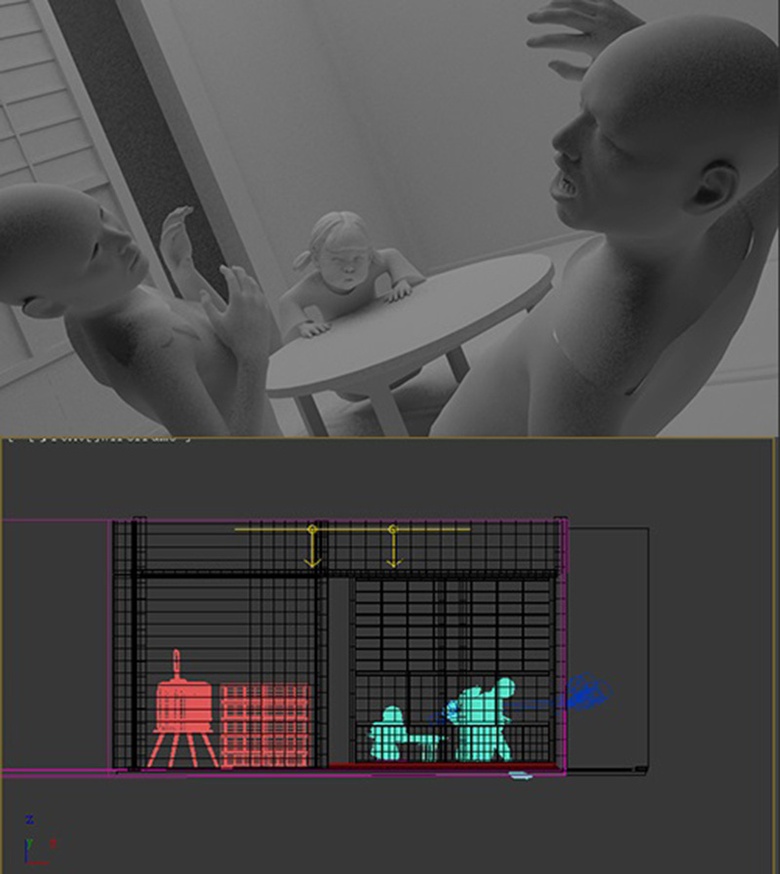 All the models were made in Maya and ZBrush. Because the image is focused around the notion of wind, every character's face was very important, and I had to pay careful attention to the various details in the clothing and body. It all required great patience and careful observation. 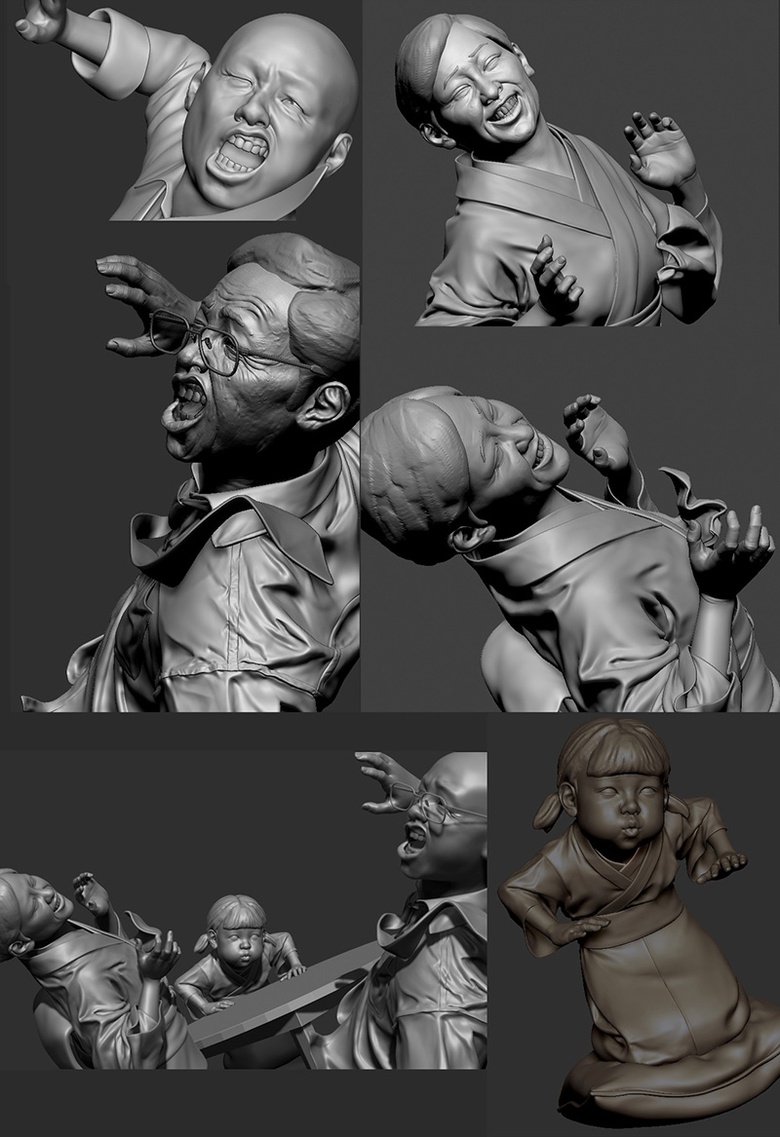 After completing the basic models, I began to focus on the scene. Most of the models had no specific use and were created using basic modeling techniques. I twisted and adjusted everything manually – which was a very interesting and imaginative experience for me. I also encountered lots of difficulties at this stage for 2 main reasons: I wanted to go for an 80s Japanese style and a windy environment; and because there were so many objects, I'm afraid I can only share a few of the screenshots here. 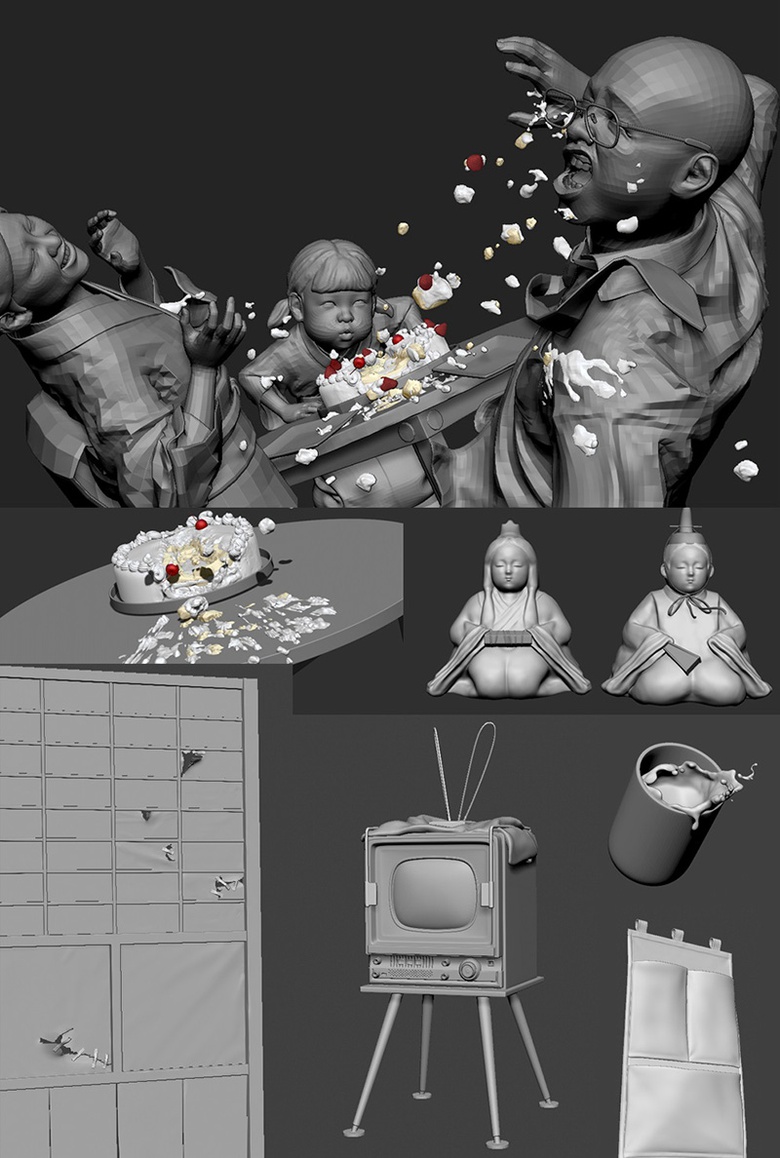 The next stage was to take care of the UVs, which I actually carried out during the modeling stage simultaneously. I mainly used the great UV software: UV Layout and Unfold3D for UV-unwrapping. In order to save production time for the scene models, I used the ZBrush UV Master tool, using it to copy the UV information from low-level models to high-poly models, as shown below. 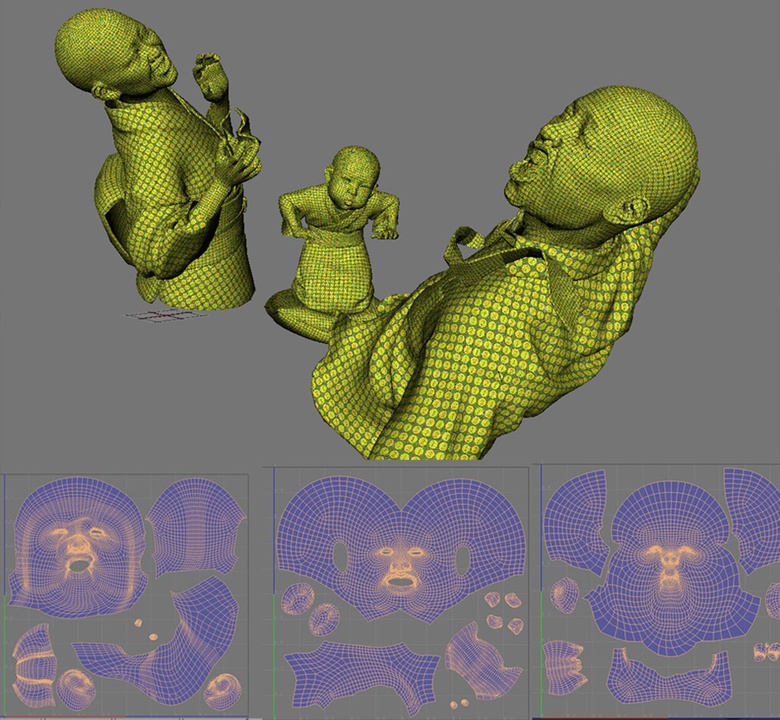 When the models were complete, I took everything into 3ds Max and began to carefully adjust the lighting to create some default shaders for rendering tests. I used V-Ray for lighting and materials; this step was very time-consuming because I needed to test the rendering repeatedly until it achieved a satisfactory result. 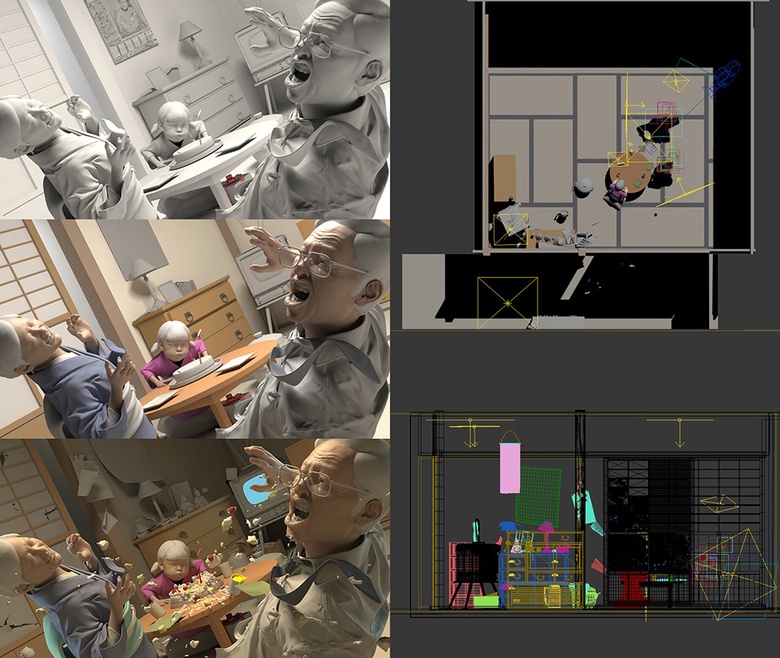 After lighting and basic colors had been set up, I began to create the character and object textures. I mainly used the VRayMtl shaders to simulate normal objects, using VRayFastSSS2 to simulate objects with an SSS material effect, such as skin, cream and juice. Because there were so many objects in the scene, the final number of textures was more than 100. Here is a breakdown of the character textures and materials. 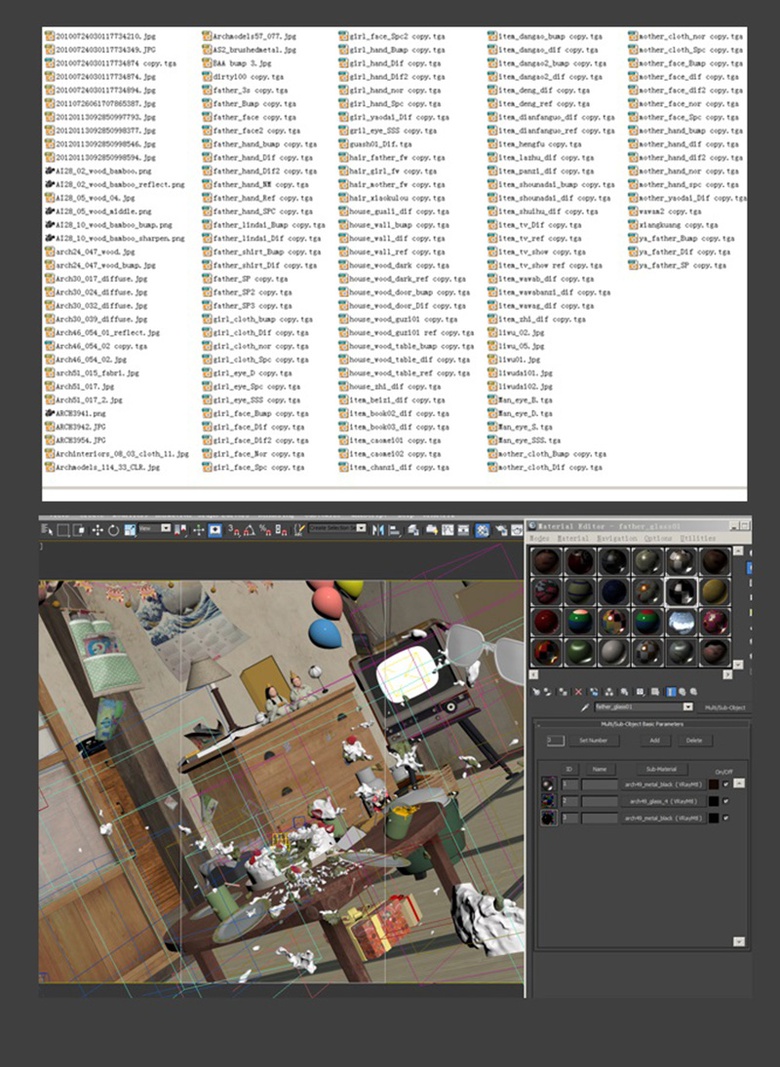 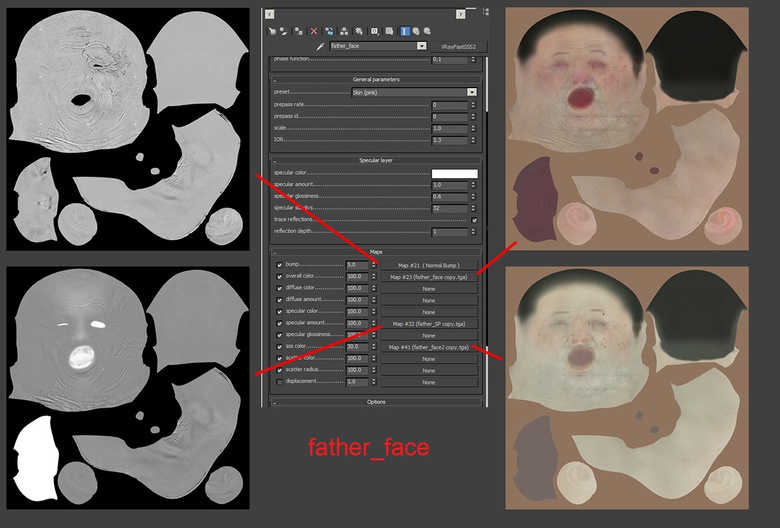 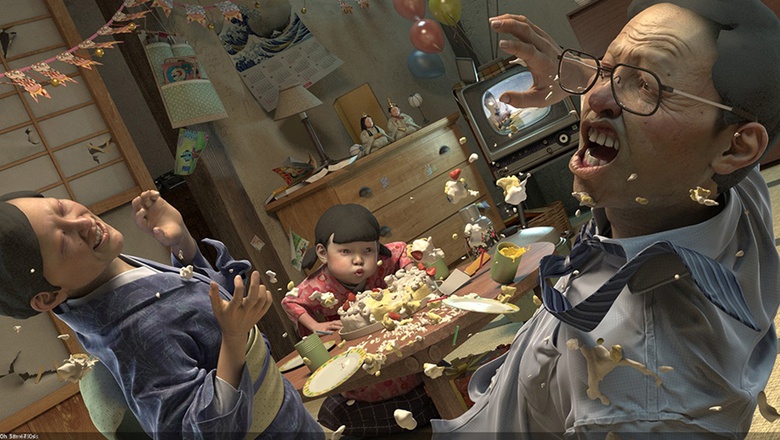 All hair was done using the plug-in Hairtrix (Ornatrix) in 3ds Max. This is not only a very powerful hair plug-in, but also very easy to control. You can find a detailed tutorial if you're interested – I'm just going to introduce it briefly here. For example: I divided the model of dad's head into a few areas, and then selected one as the basis for hair generating. Then I added OX Guide from Surface and OX Edit Guide edit spline nodes. After I achieved a proper brush spline, I then added OX Hair from Guides to be able to get an appropriate hairstyle. I also added some random nodes afterwards to get it a bit more natural-looking. I created each area of hair one by one, until all the hair was completed. 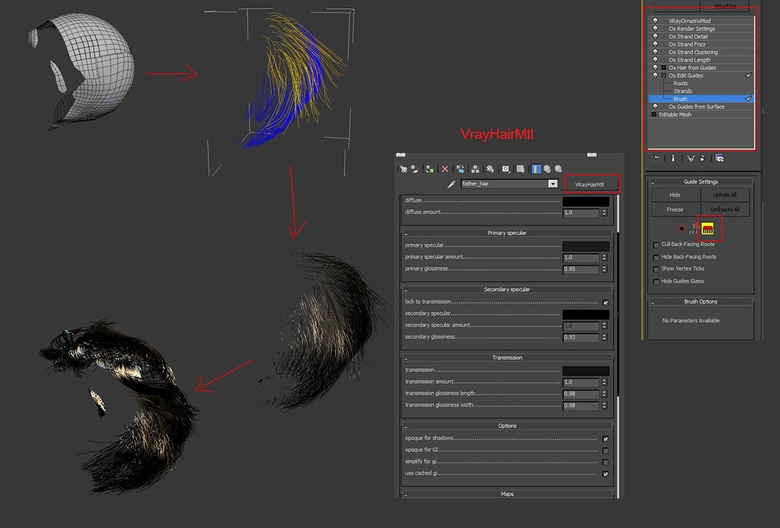 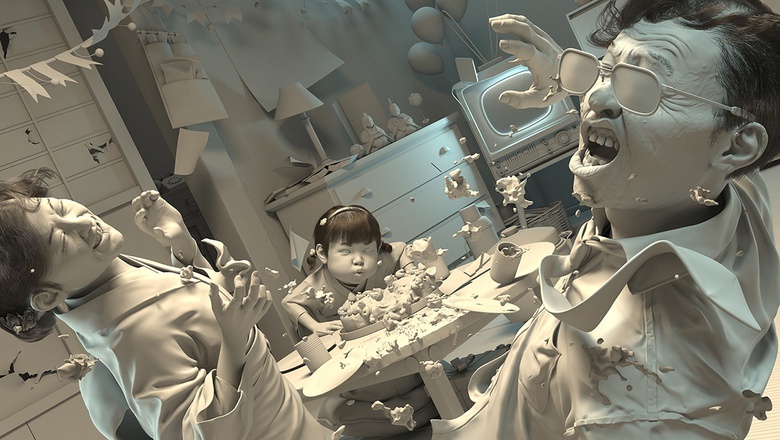 Because of the pre-test work I was well prepared, so the final rendering process was quite smooth.
I did not use layered rendering; all the elements were rendered once, including the hair. The benefit of this process is that the effect is very uniform and precise. The disadvantage is that the rendering time is too long, and also limits the flexibility of post-processing. The final result of the rendered image is shown below. 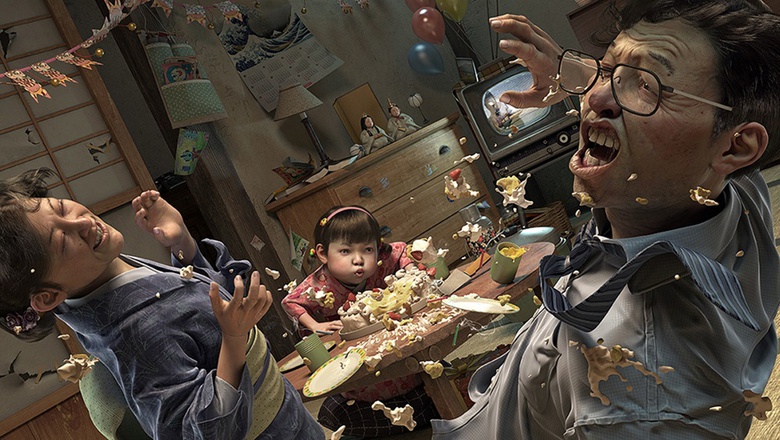 In the final step, I did some tonal adjustments and detailing in Photoshop, which improved the overall quality of the final image.

I hope you've enjoyed learning a little about my production experience on this image. I hope you enjoy the image and have found something useful from this short making of! 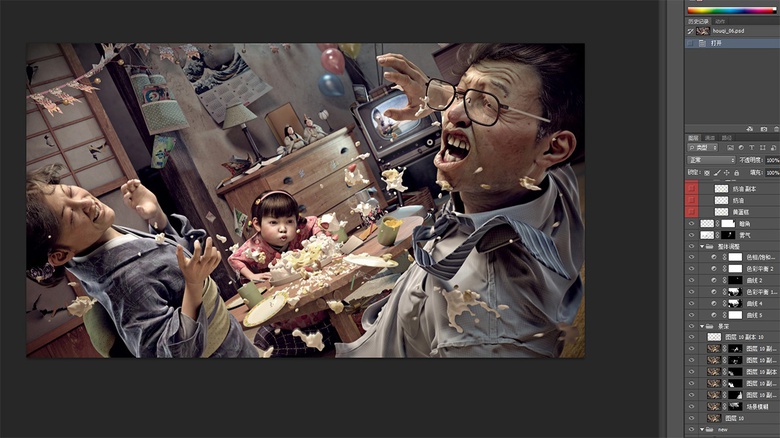 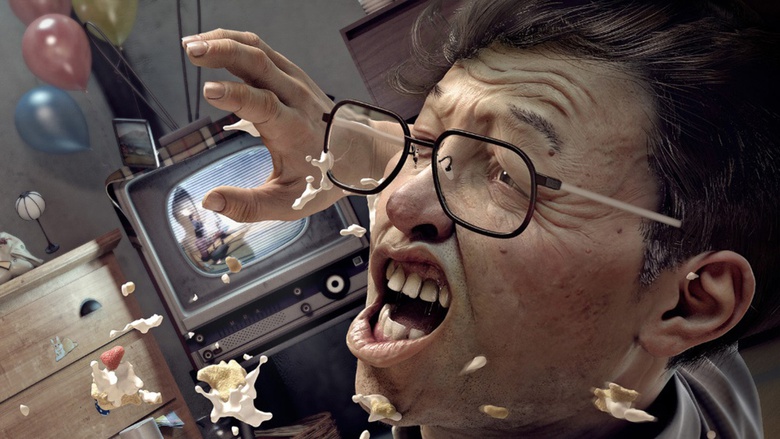 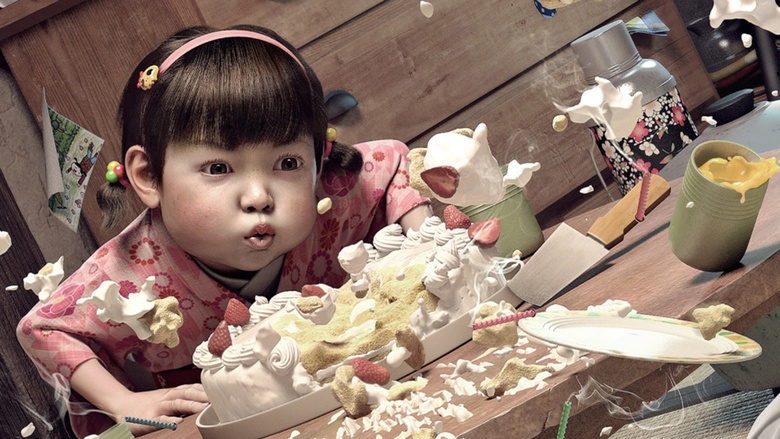 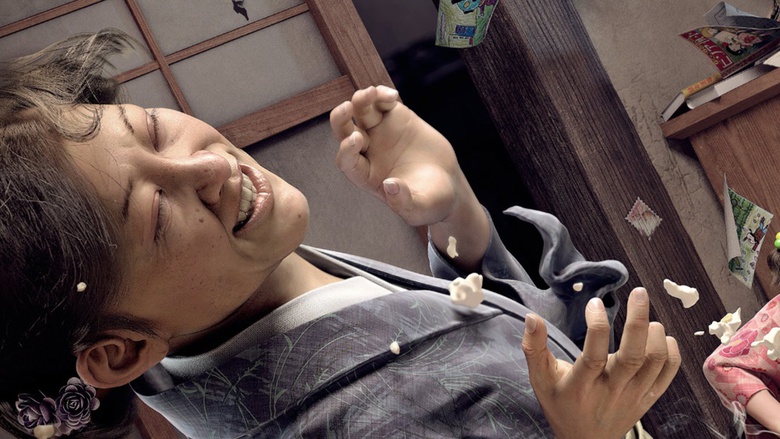