The making of Ellie re-imagined

Ray is an award winning 3D artist who specializes in the creation of AAA game characters, and currently working as a Lead Character Artist at Glass Egg Digital Media, based in Ho Chi Minh City, Vietnam.

Character artist, Ray Thuc Le, shares how he re-imagined Ellie from The Last of Us using ZBrush...

I really like the character Ellie in the video game The Last of Us by Naughty Dog, and I am curious to see how she looks in the sequel. In the game she is fourteen years old and I wanted to do something different, so I decided to make an older version of her. I hope that Naughty Dog has been working on the next game and it will probably take them several years to make it, so she could be around eighteen to twenty years old when the game comes out.

For this Ellie fan art project, her current face is important to making her look older, and also nailing the likeness. I began to gather references as much as possible. As you might know Ashley Johnson was chosen to portray Ellie in the game, but some people think Ellie also looks a lot like Ellen Page, and I kind of agree with them. So I was thinking about mixing them together. 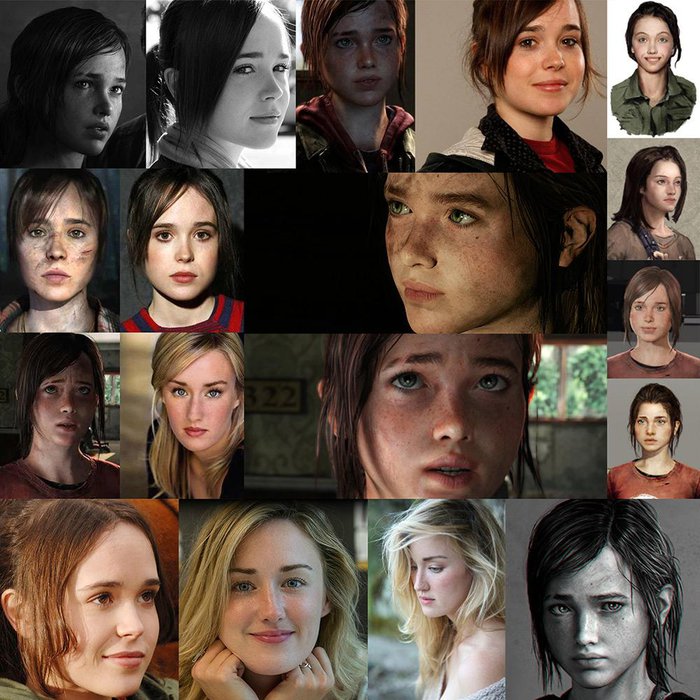 After getting all the references, it was time to analyze the face and write down all of her traits. As I'm planned to make an older version of her, it was really important to understand aging and the process of becoming older. How do we change physically as we grow? To find an answer for this question, I went to YouTube with a hope that someone might have already done this kind of videos and I found this gem, a time lapse video of a girl who takes a photo everyday in 6.5 years from her age of 14 to 21. It was really helpful, thanks Rebecca Brown!

With references and an understanding of aging I moved on to sculpting. In ZBrush I started with a generic head base mesh. I used the Move and Clay Buildup brushes, set with a very low intensity, to define the primary shapes; then I refined the muscle shapes and facial anatomy, I will add fine details later. I used the Move brush to style the hair and I placed all the eyelashes manually, they are made from very small cylinders. It is a very straight forward process that is all about patience, If you would like to know more about the workflow that I am use to create hair for games you can check out my other tutorial Creating Real-Time Hair for Games. 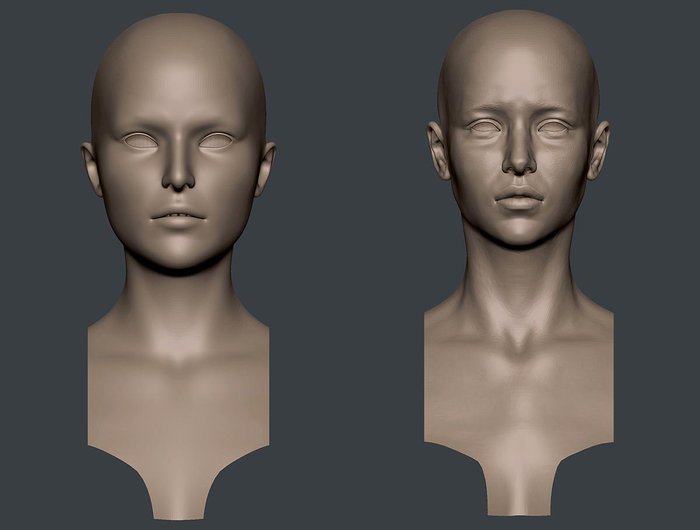 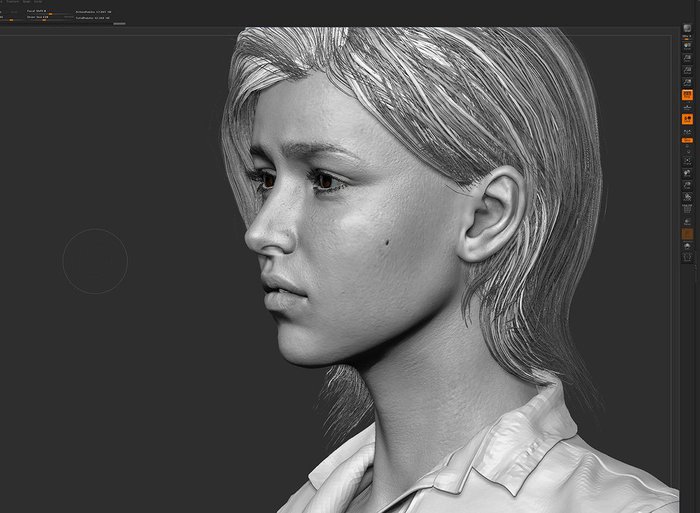 I used Marvelous Designer to make all the clothing parts. This next step shows you the Marvelous Designer to ZBrush workflow that I used in this project. First, I imported the full body model into Marvelous Designer, which uses real world scale, so make sure your model is the right size. I created the clothing patterns using the Create Polygon, Edit Curvature, and Edit Curvature Points tools, and then sewed the patterns together with the Sewing tools. I used the Simulate button and tweaked the clothing until I got the form I wanted. Don't spend too much time in MD because it is easier and faster to adjust the mesh in ZBrush. Once I was happy with the form, I export the shirt to ZBrush. 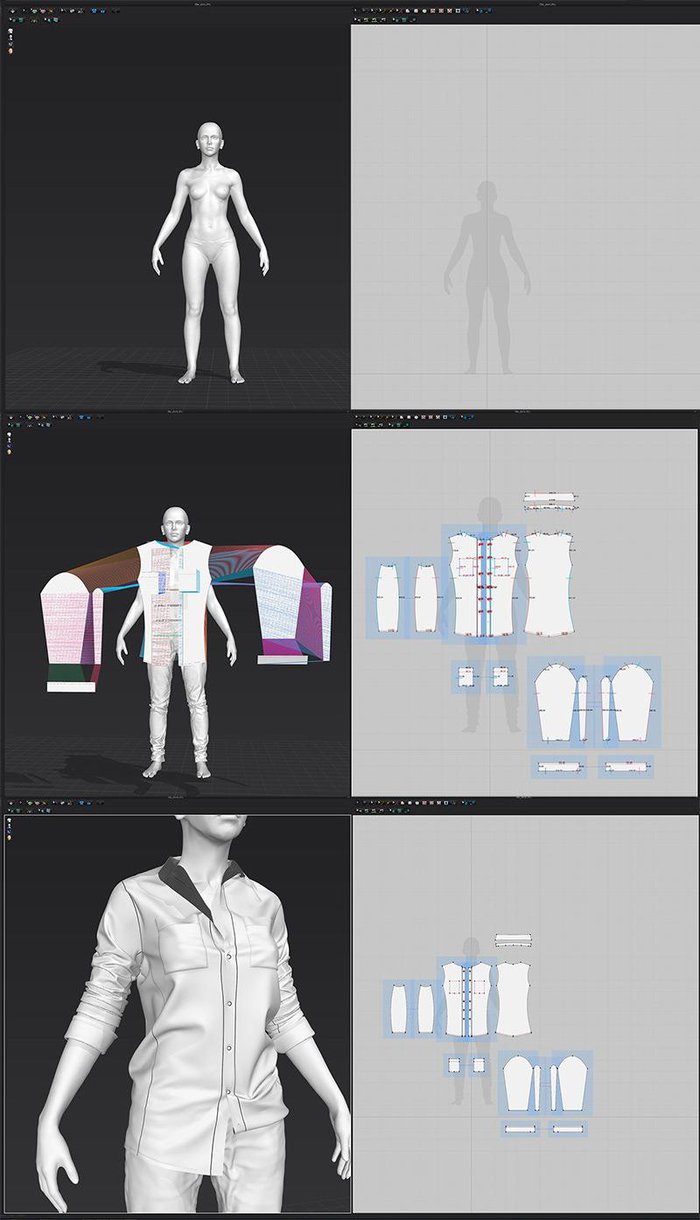 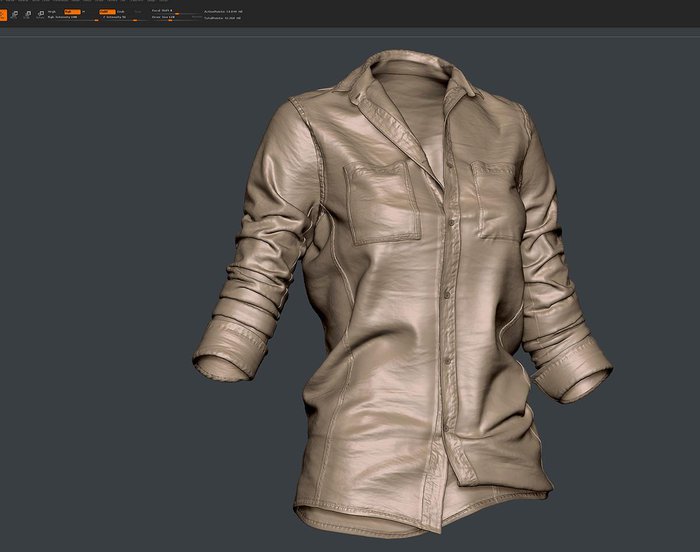 It is quite hard to explain the clothing retopology workflow in words, so it might be a bit confusing. This workflow gives a super clean topology mesh with UVs, and it also saves a lot of time. First, I exported two meshes from Marvelous Designer. The first is the simulated mesh - make sure to check these boxes in the Export settings: Single object, Thin, and Unweld. The second mesh is the flat mesh - I selected the mesh and clicked Reset 2D Arrangement to flatten it and used the same export settings. Next, I imported the flat mesh from MD to ZBrush. This mesh is triangulated, and has UVs. I need a clean topology to sculpt so I used ZRemesher to quadrangulate it. 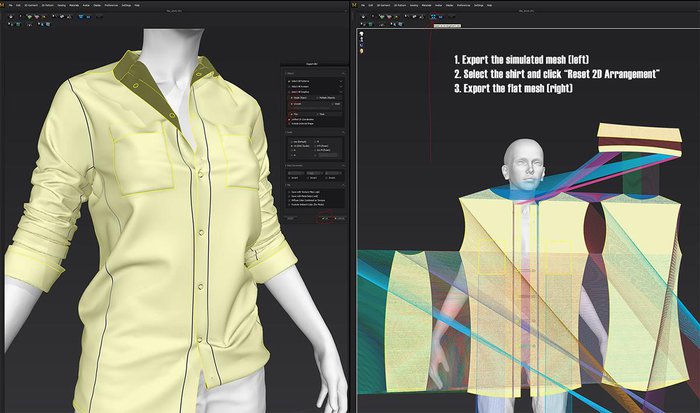 Now I had a clean quad mesh but I lost the UVs. I recovered the UVs in Maya by using Transfer Attributes. At this stage, I needed to import two flat meshes, the original one with UVs from Marvelous Designer, and the one that I quadrangulated in ZBrush. In order to transfer UVs, the quad mesh's edge borders needed to be aligned perfectly over the tri mesh. ZRemesher will never give you a perfect result, so make sure you spend time to fix the quad mesh if needed. 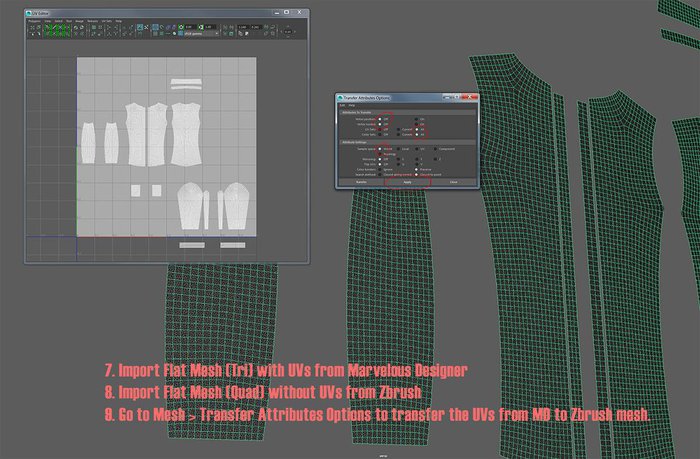 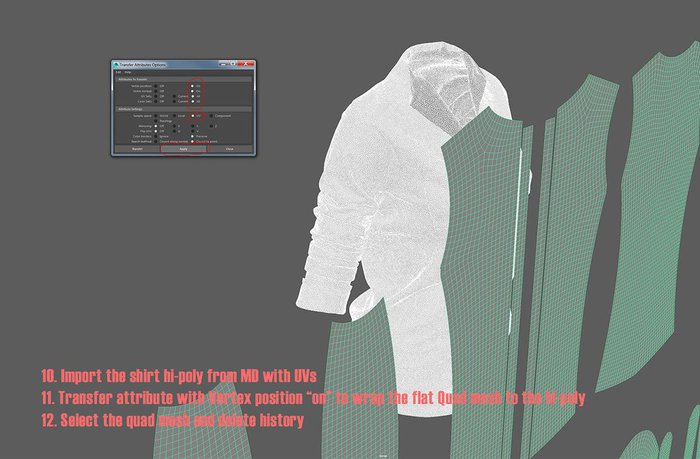 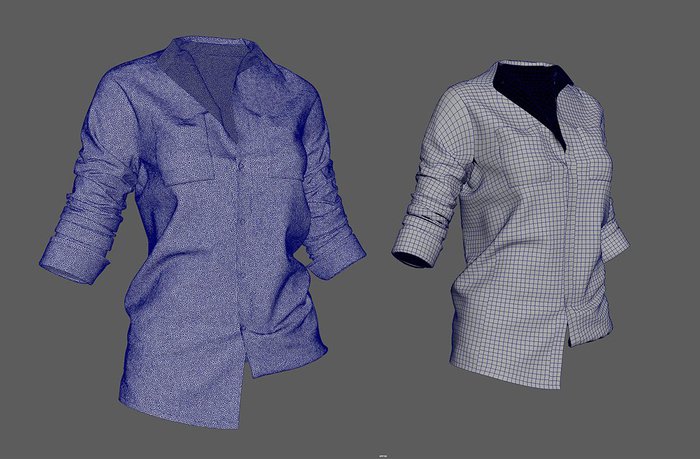 I used Substance Painter for texturing. This technique is not the best for high realism, but for this project it's enough. In the image I have separated each of the textures I used for Ellie's face.

After finishing the textures, I exported all the maps in PBR Metal Roughness preset to use them in Marmoset Toolbag, a real-time rendering application. Please note that you might need to change some settings in Marmoset Toolbag in order to use texture maps exported from Substance Painter.

Here is what I do:

Once all the materials have been set up, it was time to move on the lighting. I spent a lot of time on this stage because lighting is very important in my opinion. Lights are the most effective way to achieve dramatic results. It plays an important role in creating mood and emotion for the character. I tried many different lighting setups until I got the look I wanted. With the lighting sorted I was done, you can see 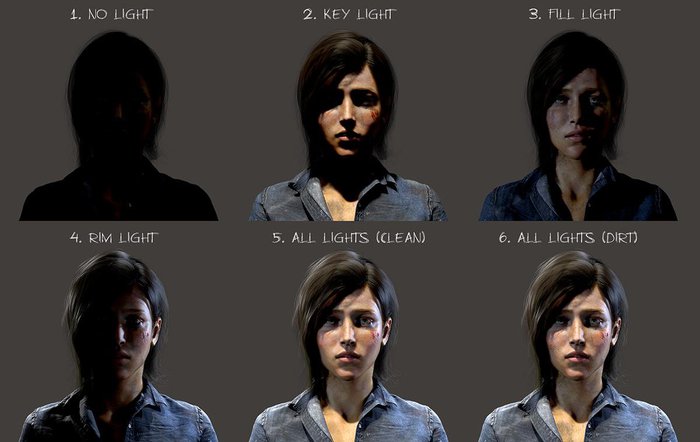 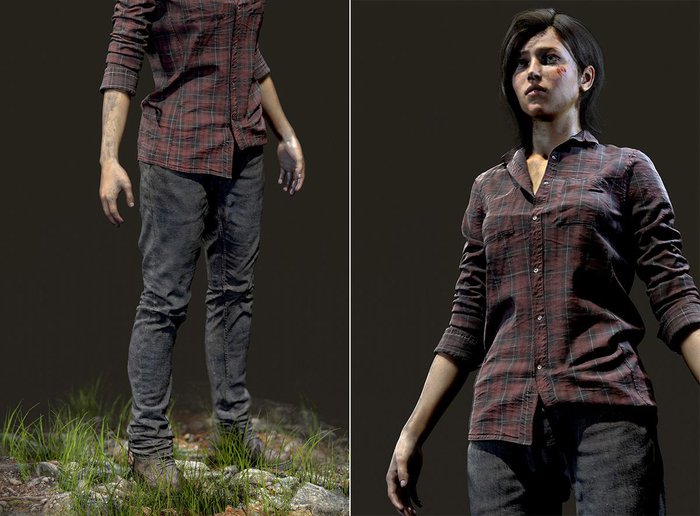 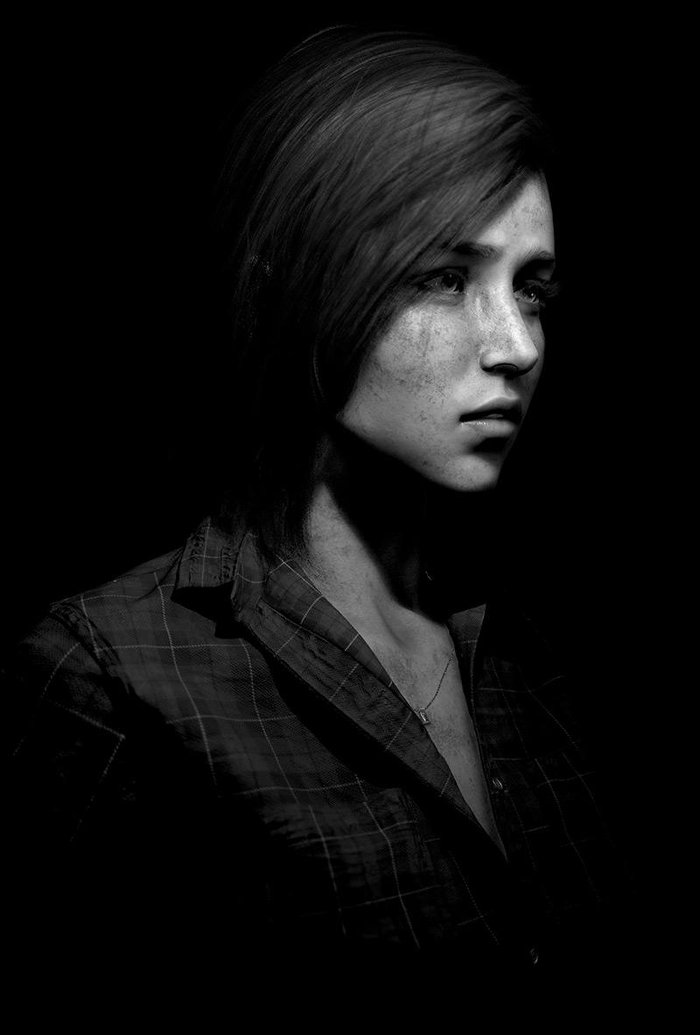 To see more of Ray's work check out his website

Have a rummage through our free textures