The Making of Axl 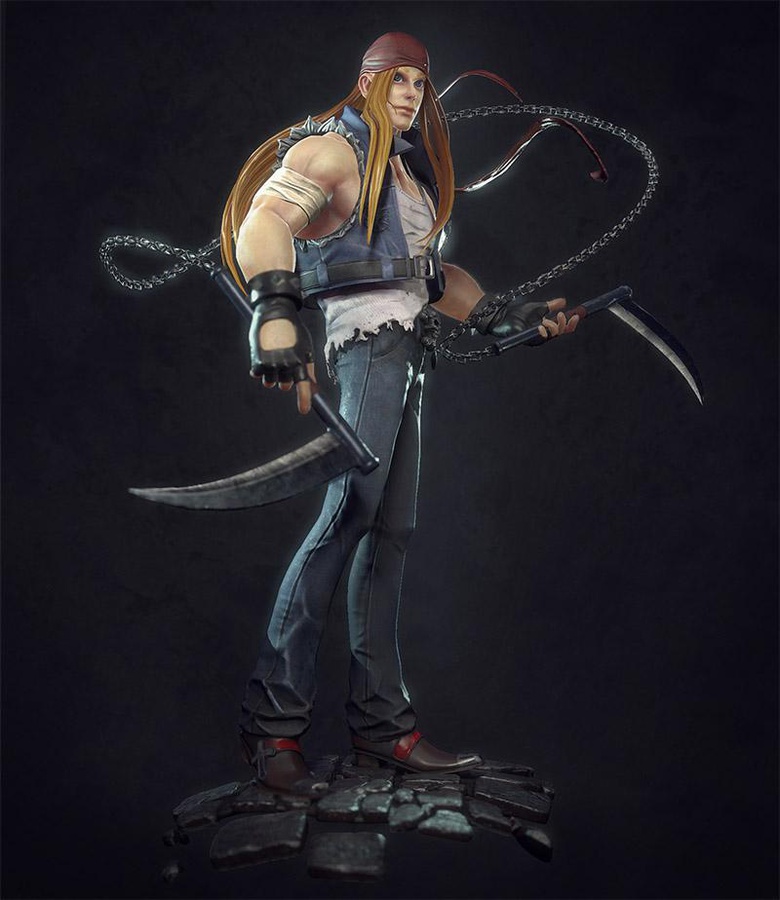 Hey Guys! I would like to share with you my workflow that I use to create my characters for games. This is the process of one of my latest projects which made to the fan art of Axl Low from Guilty Gear game series. Let's start!

This is a very important step for all of my projects because that's how I decide what the character's style will be. I like to search for different kinds of references, such as materials, clothing, and style. I usually put all the images into a single file so that they will be easier to see. It is a very flexible step that I can always come back to and add more images if needed. 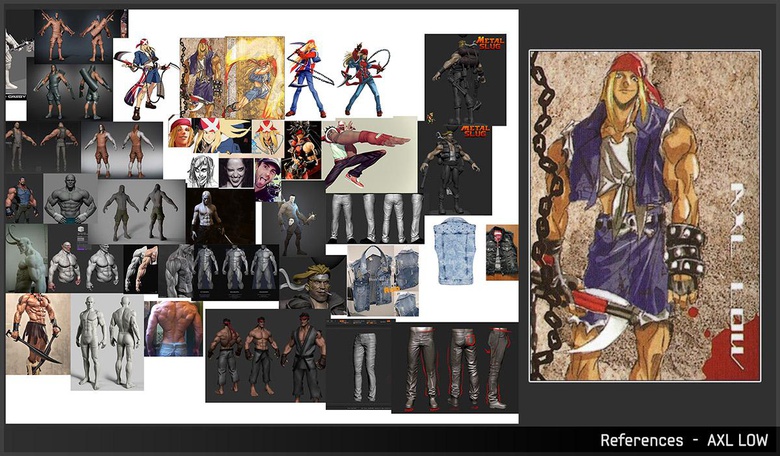 In this project I started with a ZBrush basemesh and then blocked out the clothes. Do not worry! At this stage everything seems weird; the goal here is to do this first blocking out of all the character elements and then decide what works or doesn't. After blocking out, it's then time to refine all the elements. At this stage it is normal to take turns between sculpturing in ZBrush and modeling in 3ds Max. With the modeling work practically finished it was time to start adding small details such as the skin pores and clothing seams.

Building up the character from a basemesh

I chose to make the head as a separate piece from the body because I wanted to get a stylized looking face. Working the face separately allowed me sculpt and stylize with more freedom. I started the head from a ZSphere and kept refining until I got the final result I was looking for.

Using a ZSphere to sculpt the head

To make hair I usually start with a ZSphere and create an initial model to serve as a guide for hair. With the guide model ready I sculpted the separate strands by making a selection and using the extract function to create a new object. This formed the final hair lock which I carved and refined until I was happy with the look. I repeated this process for all of the hair.

Sculpting the individual chunks of hair 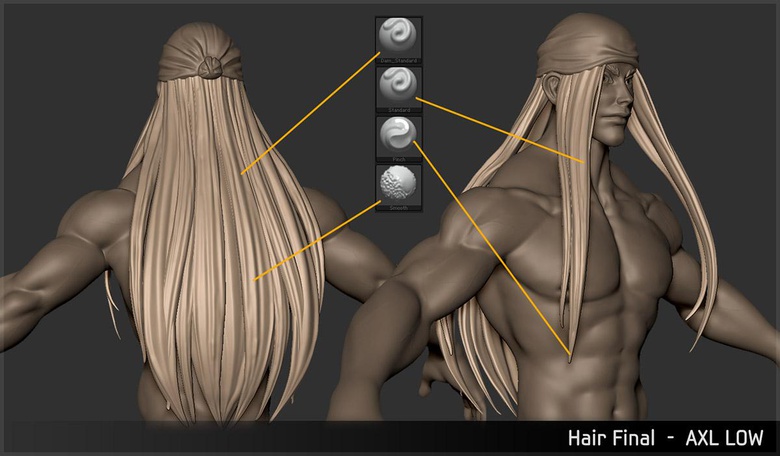 To make topology I decimated the model in ZBrush and exported it to 3ds Max. I often use the Wrapit plug-in, along with 3ds Max tools, for this process because it helps me to create more accurate topology. For some parts, such as the body or hair, I use ZRemesher. 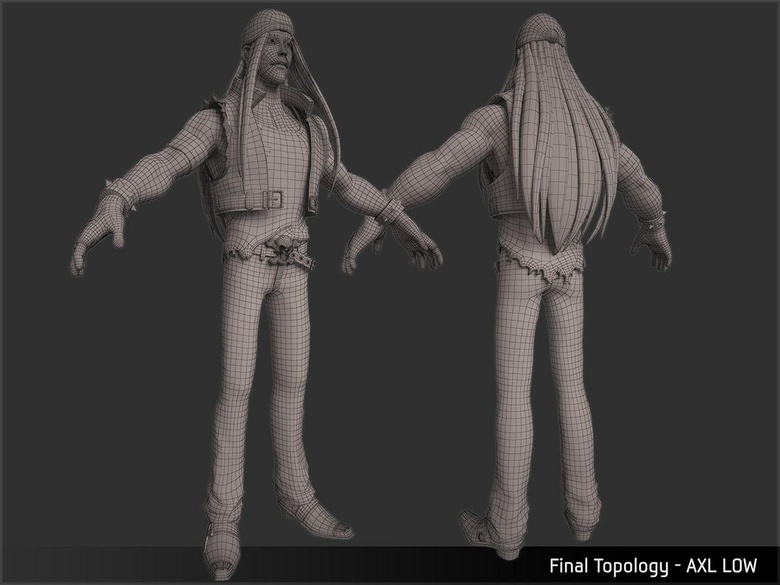 For the head I strongly recommend doing the topology by hand. I know that ZRemesher is a fantastic tool, however, I prefer to decide where the loops go; this can save me from a lot of future rigging and animation problems. 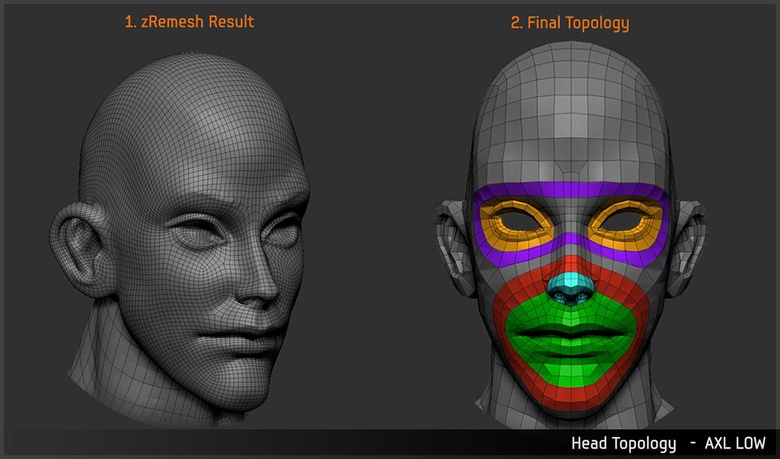 Retopologizing the head by hand

Mapping was done in 3ds Max using Unwrap. After sharing the maps, I export the .objs files to extract the normal map and the Ambient Occlusion using xNormal. For this character I divided the model in to four maps of 4096x4096 and one of 2048x2048 (for the eye). 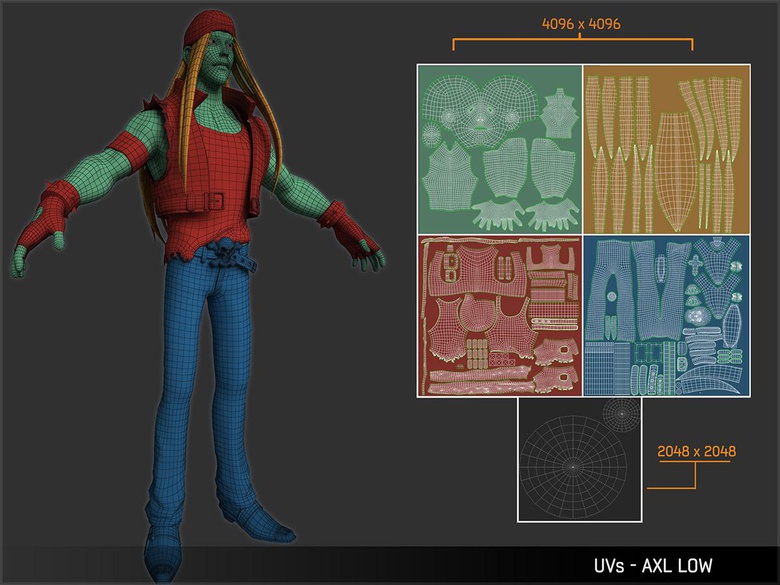 With the map ready I used 3D-Coat to add texture to my character. 3D-Coat offers a good variety of prefab materials, but I prefer to create my own materials using reference images and painting. 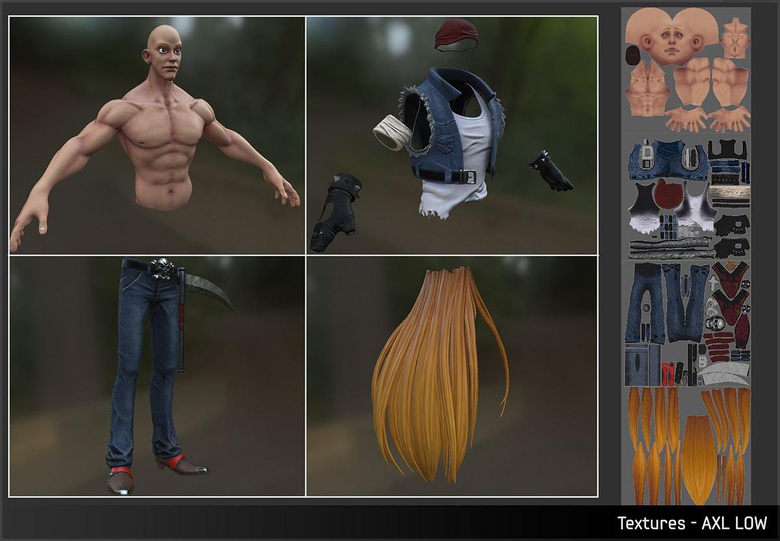 Adding texture to the character

Sometimes the textures can look different once you are outside of 3D-Coat, to fix this problem I export the textures as PSD files, this preserves the layers. I open the texture files in Photoshop and make adjustments to the layers using the opacity and blending options. I prefer to finish textures in Photoshop because it is easier to manipulate the colors and levels. 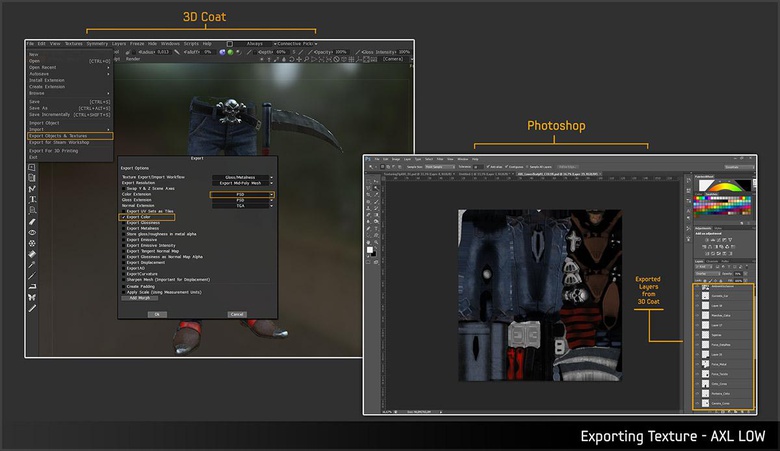 Exporting the maps in to Photoshop makes adjusting the textures easier

Once the texture is finished, I send the lowpoly model to ZBrush and pose it using the Transpose Master. At this stage I also wanted to add a weapon and pedestal, to help create an environment and give the character a sense of life, as well as starting to think about the cameras. 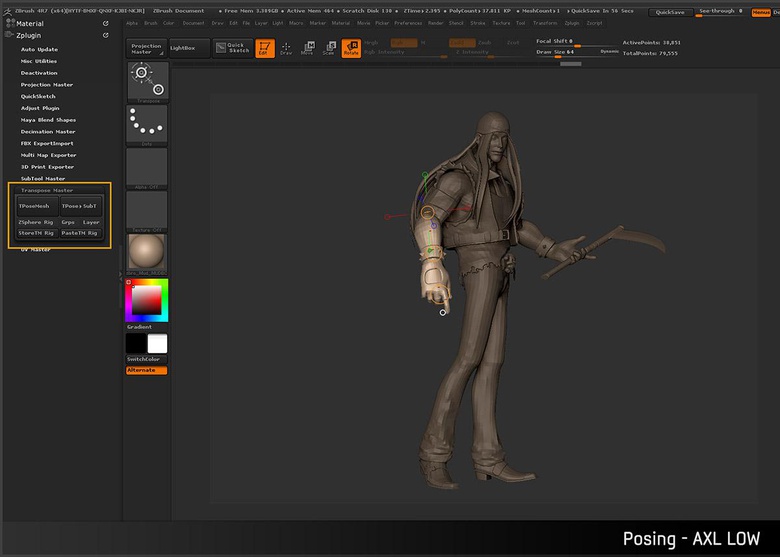 Posing the character to give it some life

After posing the character I export the .objs files in to Marmoset to set up the lighting and cameras. In this scene I used a three point light illumination, (Key light, Fill Light and Back Light); I also added another light to illuminate the face because it was a bit dark. I like to create lots of cameras so that I have as many cameras as possible, and then save a render. 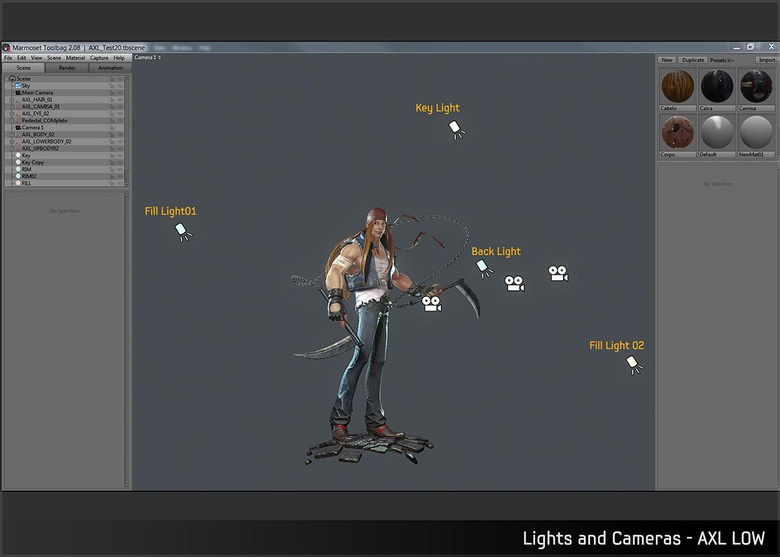 Lighting the character in Marmoset

With my render saved, I opened the image in Photoshop put it all together to create the composition - which basically involved adjusting the levels, contrast, and creating a background. This part it's more about taste, you can use Photoshop to correct whatever you want, but I prefer not change my characters too much; so most of the parts you see in my works are in the render.

So, that's pretty much it! I hope you guys enjoy my making of and that it is useful to you and your studies. Keep always studying! 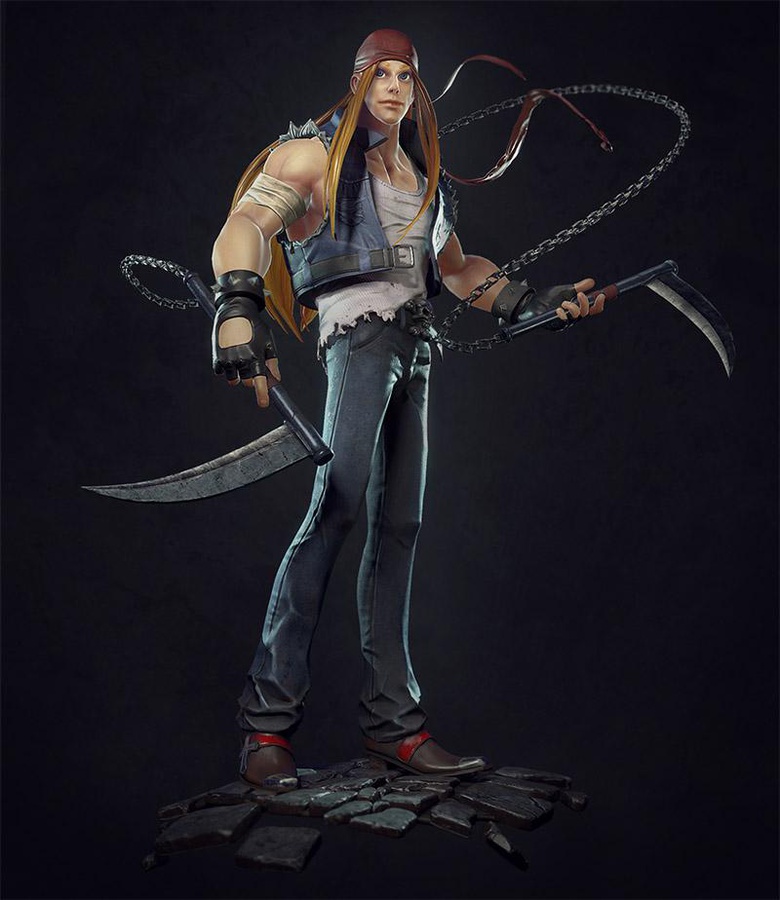