The making of Albert Einstein in ZBrush

CG generalist Alexander Beim takes us through the ZBrush and Maya workflow for his bust creation of Einstein...

After finishing an order for the creation and animation of a 3D head of Albert Einstein for a hologram, I wanted to share the work done. But I realized that the quality of the hologram was very low, and the state of detail that my model had was not enough to present it on major internet galleries. This inspired me to invest my spare time, in order to improve the model and try to bring it to perfection. I didn't have to hurry, I just wanted to achieve a certain result and raise my level. Therefore, I had many attempts and many of them were unsuccessful. As I thought, I lacked the knowledge and techniques. I reviewed a lot of lessons on creating skin in Arnold. Ultimately, I think I did not come up with anything new on the technical side, and I walked the standard path, but put love and attention into my work.

The first thing I started with was collecting photos of Albert Einstein. Unfortunately, it turned out, there are not that many, and they are only of a so-so quality. And even they were black and white. There weren't many photos from a certain angle, and I checked out video material that was even worse quality. Eventually, I saw enough of them to such an extent that I began to see the shape of Einstein's face and immerse his image in my subconscious.

Front and side views

From the photos I found, I created a front and side view for the basic proportion of the face, lines of the eyes, mouth, and nose. Subsequently, using the surface transparency effect in ZBrush, I used them to compare my model with the original.

For this, I took my basic model head with the correct topology for the animation, and started working intuitively. I want to say that all the phases about which I write were not clearly defined. I kind of sketched one stage and went to the next one. Later I went back to the previous one, and so on. For example, when I more or less understood the shape of the head, I began to sculpt. Constantly comparing my work with photographs, I increasingly understood the lines and form of the face of Albert Einstein. Because later I was going to create an animation, I decided not to make the head perfect at first, because the face under lighting, with the material, with textures, and even more in the animation, can look completely different. Only then can the errors be seen that were not noticeable on the gray model. I decided when the rig and animation were ready, that I'll make corrective blendshapes in which I'll add the fixes. 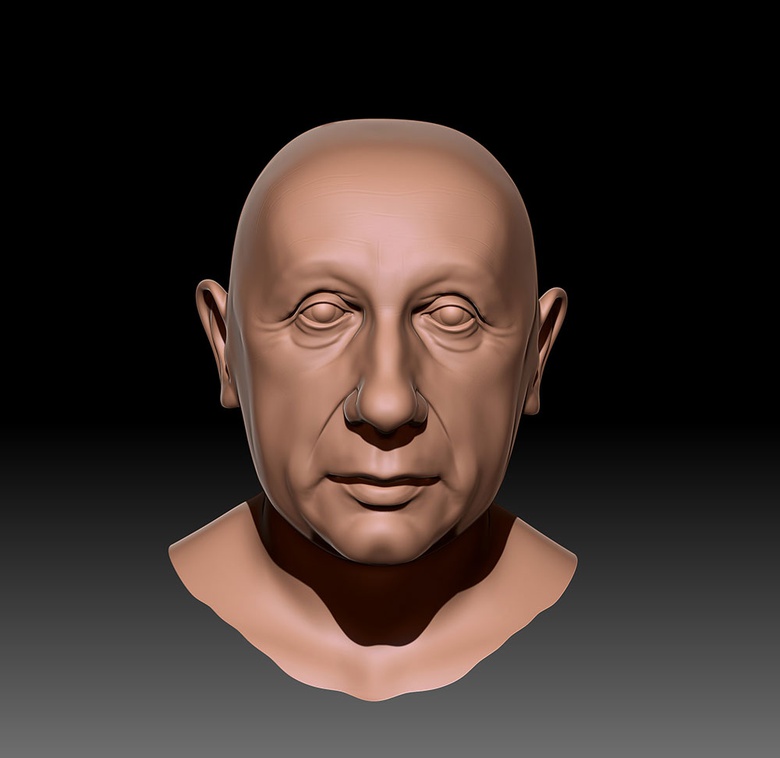 There is nothing special to talk about. UV coordinates were created in Maya. I used the UDIM method and broke the full head into three large pieces. The most important part of the head - the face - is on one piece in full size. The less important parts, such as the neck and ears are on the other pieces. Since the top part of the skin on the head is not visible, I reduced the UV in size and got an additional place for other parts.

I needed to create a specific person and therefore I should have, if possible, created not just wrinkles, but the wrinkles that were on Einstein's face. First, I drew them with ZBrush polypaint on the smooth face of my model. I did not use ZBrush HD Geometry, although I regret it. In my model there were 8 ZBrush subdivision levels. For the grooves I used the DamStandard brush. To quickly build the form I used the ClayBuildup brush and the Inflate brush. I had the larger layers for the wrinkles. For the small pores I created another layer. I also had a layer with the eyes closed, for the convenience of creating fine wrinkles on the eyelids. I also created a layer with the final pose for my rendering. Some of the alpha I created myself, some of I used defaults. 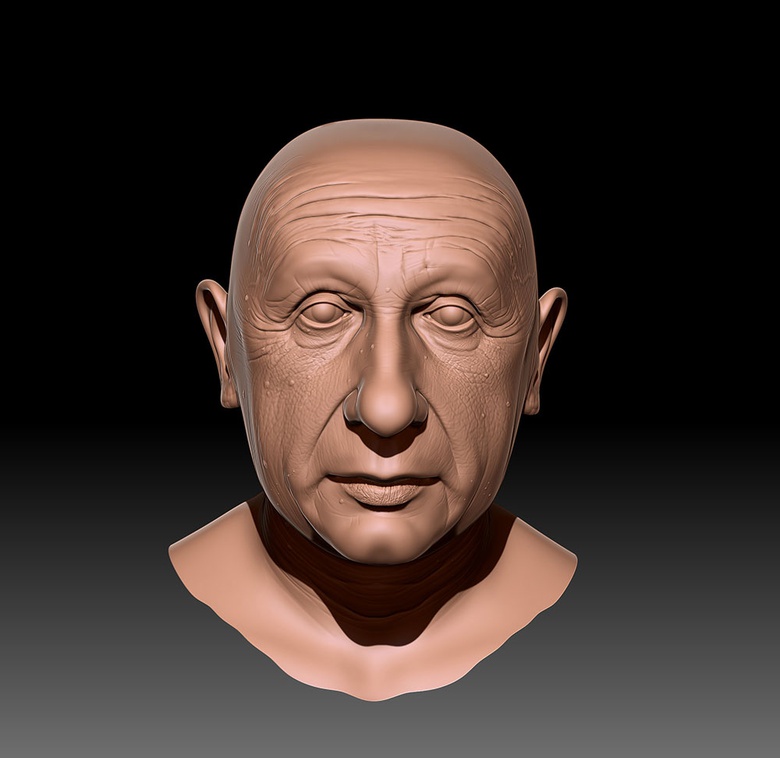 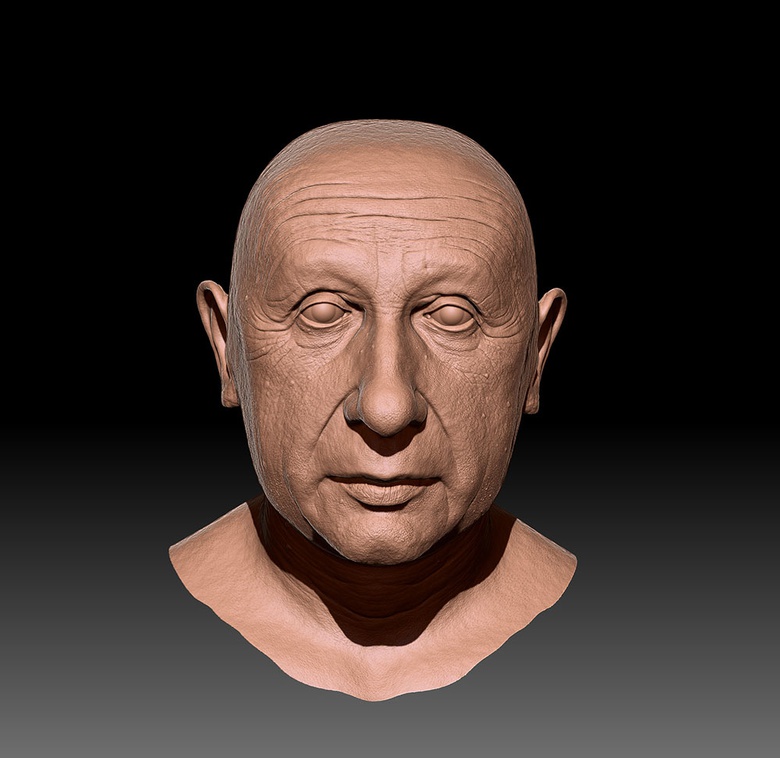 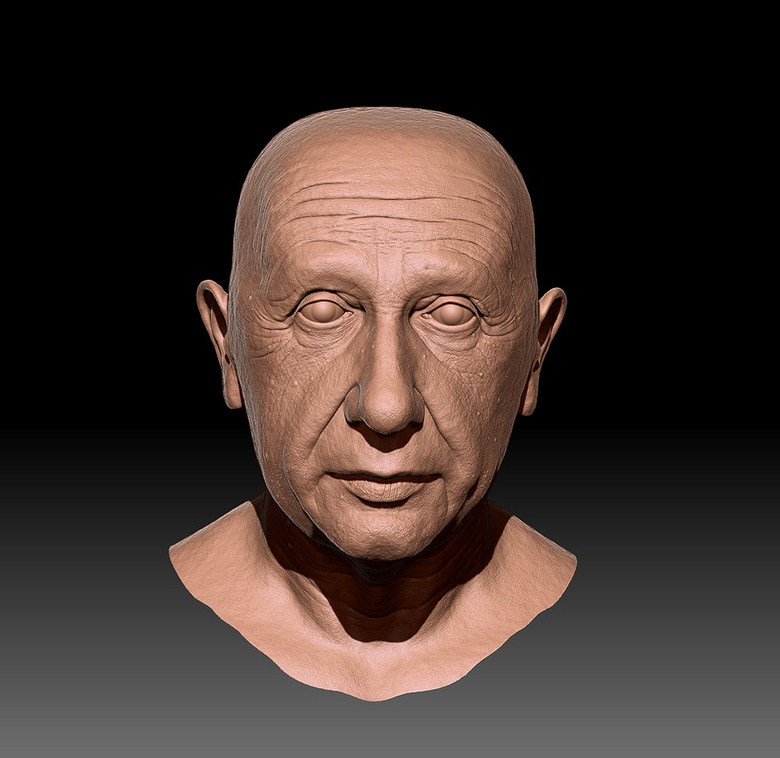 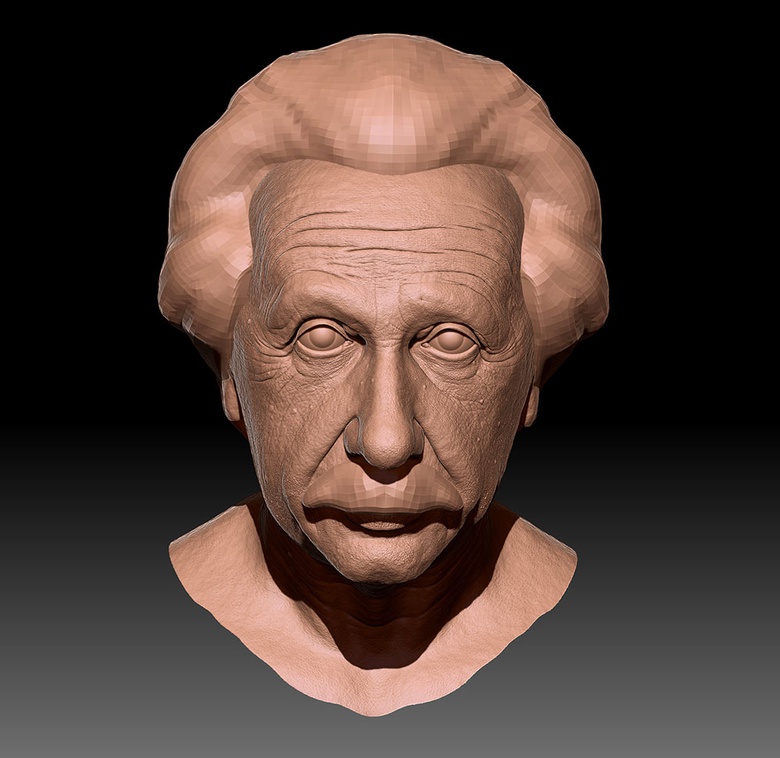 I created the displacement map in ZBrush. Next, I exported two models, the low-poly with UV co-ordinates and the high-poly from ZBrush, and imported them into the Substance Painter. In it, using the Bake maps function, I baked the texture on low-poly with the details taken from the high-poly model and proceeded to make the basic texture of the skin. For a certain reason, I could not use photos from other people for texturing. They are the face of an old man and required textures with wrinkles, but wrinkles from other people's faces would not match the wrinkles of Albert Einstein. Therefore, my textures were created partially procedurally, and even more were hand-painted. After I created the basic layers with a common skin color. I created a few procedural noise textures. Next, with the blending mode color, I created the chromaticity of the areas of the face. Roughly speaking, the forehead was yellowish, the cheeks and nose were reddish and the beard was bluish. Also I drew wreaths, moles, and old spots under his eyes and on his forehead. 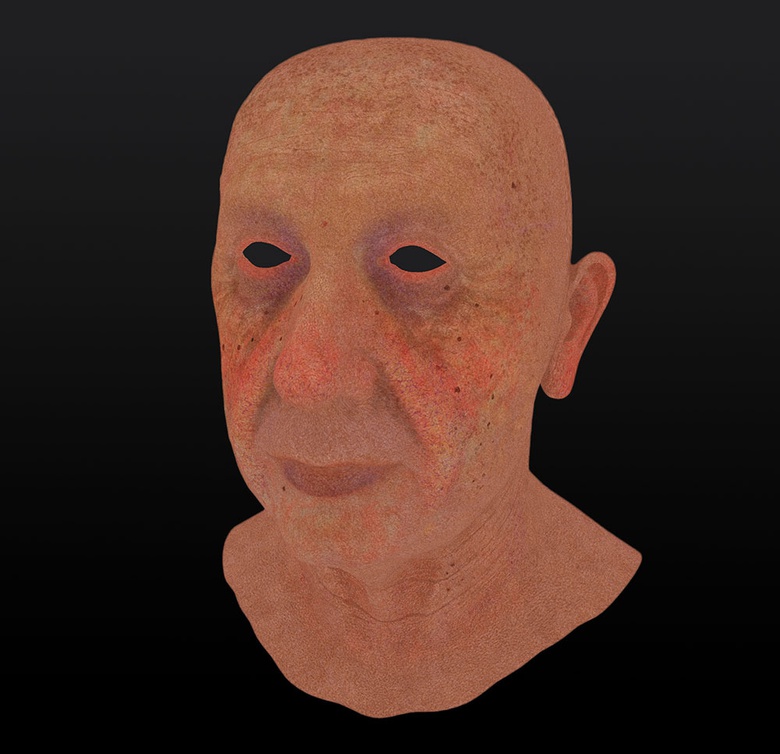 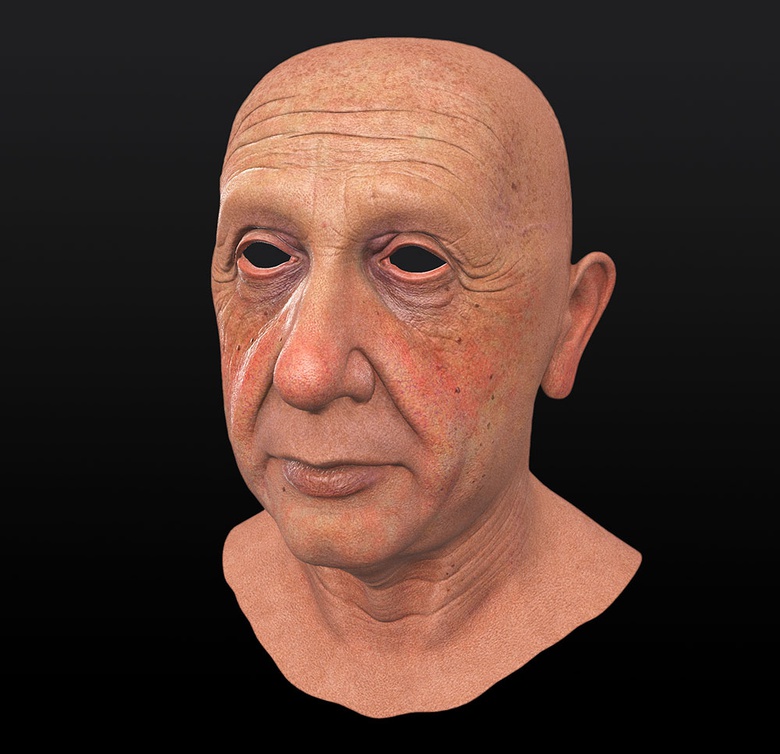 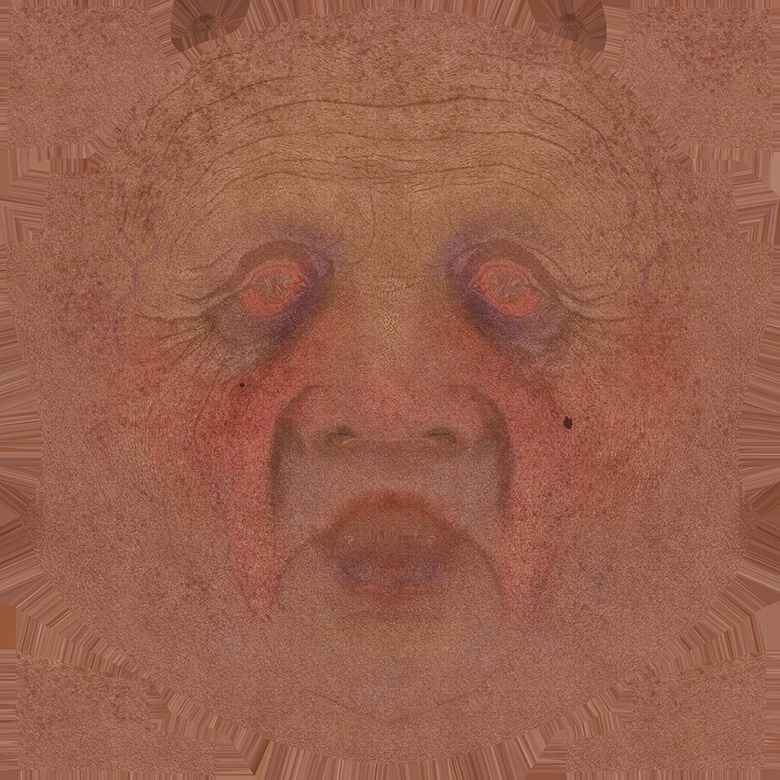 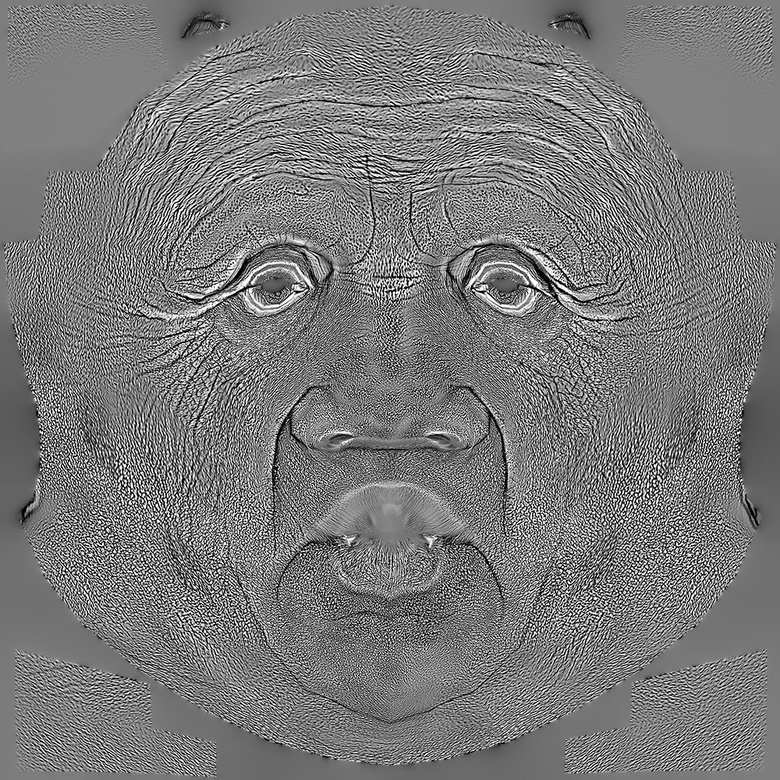 Everything was ready for further work in Maya. I imported the low-poly model and started with lighting. For rendering, I chose Arnold. In the latest versions of Arnold, they have expanded the capabilities of the skin material and now the skin in Arnold looks even more realistic. I used two basic area lights. I placed one light behind and one above-left. Also for GI, I used DomeLight with an HDRI map. After I was satisfied with the lighting, I proceeded to create the skin material. First of all, on the material of AiStandardSurface, I placed the Displacement map and switched on Displacement and Subdivision in the Arnold tab of the head model. After I set up the basic parameters of the material, I began to place textures in it to complete the process. After I was pleased with the look of the skin with textures, I started to make hair. In fact, I was not satisfied with the skin shader at first. There were a lot of experiments with the parameters of the material and mixing of textures and utilities. 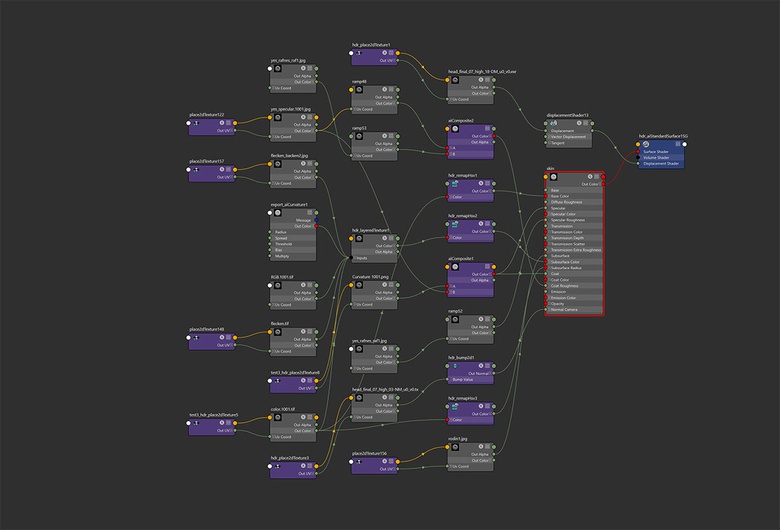 For making the hair, I used Maya interactive grooming. I really really liked this new tool, it's great. I took one large copy of Einstein's head model and distributed the hair on it. There was separate hair for the head only. I also made separate grooming for the loose hair on the head, and separate grooming for the mustache, eyebrows, and eyelashes. First, for the head hair, I created Guides and built the form with their help, but afterwards I switched to brushes and almost all of the hair was created with brushes. Of course I used the same modifier, such as noise and others. For a more random hair look, I used all kinds of textures in Modifier. 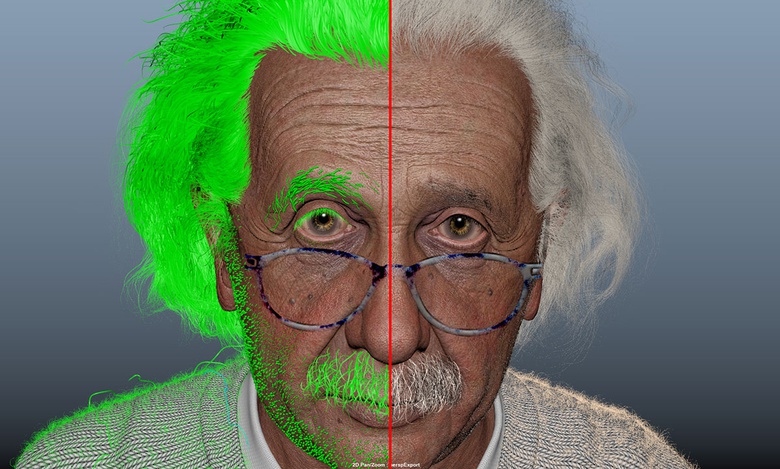 The eyes were created from two objects. The outer ball with transparent material was only for gloss, and the inner material without luster was with textures. On the white part of the eye I also painted a pair of wreaths. For the volume of the iris, I also used displacement.

For this work, I almost did nothing in Photoshop. I just created a background, adjusted the contrast, a little color correction, and added a signature. I am myself very happy with the result; I hope you liked my work too. 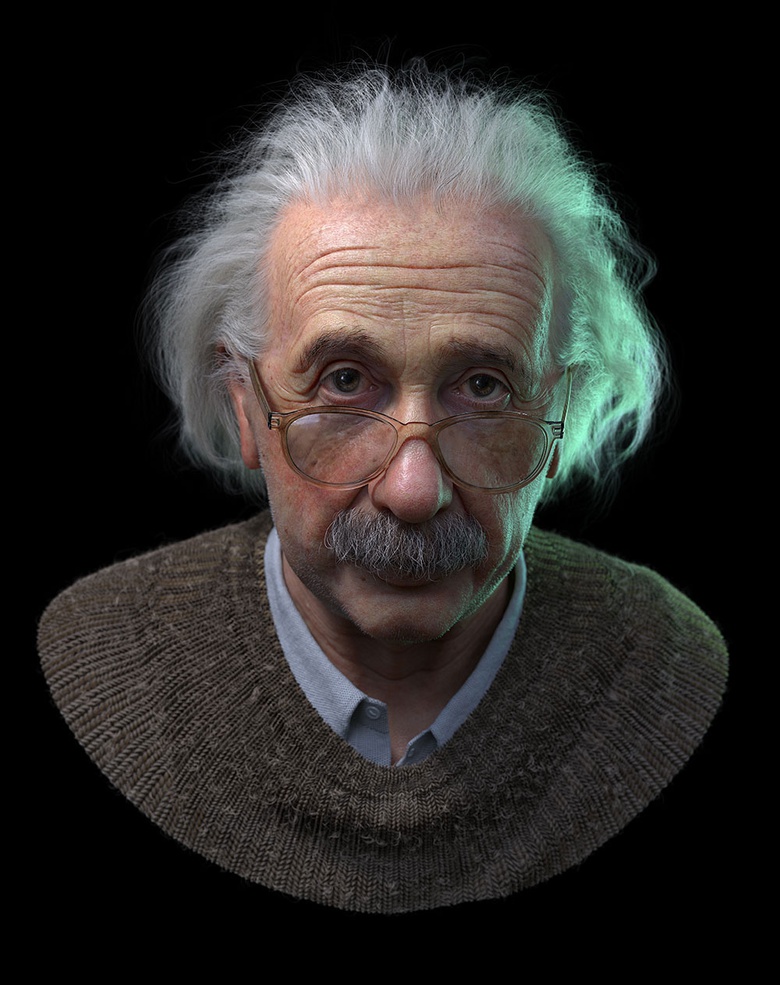