The Making of a Sci-Fi cityscape

In this article I will look at how 3D can help to create a foundation for a very detailed sci-fi cityscape. Once the 3D part is done I will move on to how 2D work refines the details and how to tune the atmosphere to find the right colors that give the overall picture a captivating mood.

Normally to find your composition you would start with rough sketches, however I tackle my work a little differently with the help of 3D but I still like to start rough. Originally I wanted to create a giant space station and started working on the scene by kit-bashing some of the models from previous projects. I kept the main structures in a separate scene file since they ended up being rather polygon heavy. Needless to say I pushed my machine quite a bit when bringing all the elements into one final scene in the end. 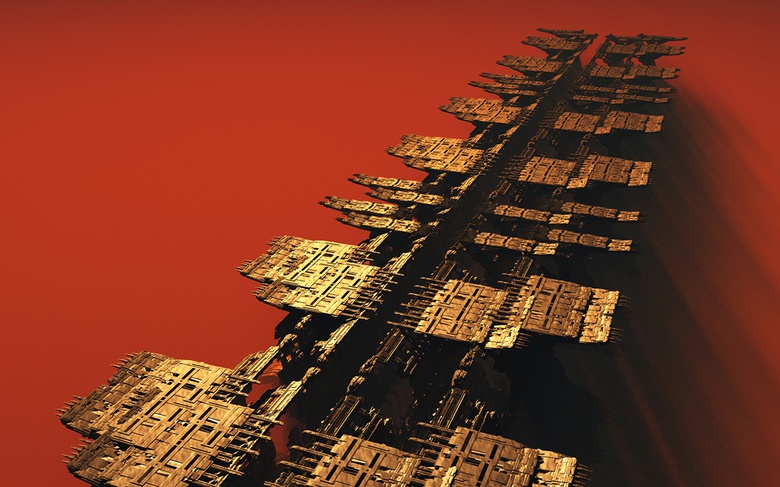 I soon abandoned the idea of doing a space scene and followed my love for Sci-fi cityscapes. You can argue a lot about the quality of the Star Wars prequels but ever since I saw the world-spanning city of Coruscant for the first time I knew I wanted to create something like that! So I decided to convert the space station into a space port of a giant futuristic city. Now it was time to build a city and I started with the background first. Again the buildings are kit-bashed models with the intention of being painted over here and there later in the process. 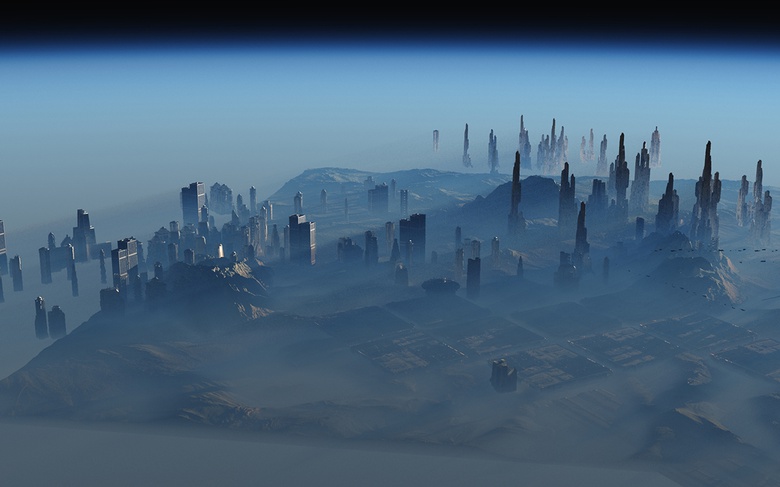 This is a view of the background elements of the city, I spent quite a bit of time working out the right placement to compliment the composition

I wouldn't say there are rules set in stone when building a sci-fi city but there are some things you should keep in mind. First of all, do not clutter your scene with mile high buildings and secondly try to maintain a good balance and variation of sizes and looks. For this scene I used copy & paste a lot but I always kept an eye on the overall composition since I want the viewer to experience the city, dive into the details and discover stuff. After adding more detail to the main structure and finishing the background and mid-ground, I moved into Photoshop and add more life to the foreground.

The easiest way to suggest a busy sci-fi city is to add some ships that are zipping through the scene; although this is very cliché it does the job. Beside that we can also add some more ships that are docked to the station. I also had the idea to add some interesting energy generator elements. Even with the extra details of the ships and generators added the scene still needed more color in the foreground. So I gave those generators a neat sci-fi blue glow. Every giant city needs energy, right? Now we are ready for a final render.

Adding life to the city

With element heavy scenes like this one it is good to render your picture the smart way. Every modern 3D package has the ability to render your scene with MultiPass options, these allow you to render specific elements (buildings and ships for this piece) along with a mask. It makes it very easy to replace already rendered elements in Photoshop because there is always something that can be re-rendered to refine details in the scene. Vue also allows 'Area Rendering' where you can select a small portion of the scene to be rendered instead of the complete scene. So the best way to render this scene was to render the city and ships separately.

Additional detail was added by using the Specular render pass (that is also part of the MultiPass Render options). This is an easy method to give the suggestion of detail throughout a scene.

What is a cityscape without some lights? Even if this scene has a daylight/morning atmosphere, there are some areas that lie in pretty dark parts. That is mainly in the area on the left next to the main structure - around the energy generators. Here I used the rendered masks to single out the parts I wanted to texture. In this case it was a simple photo of a night skyline of a random city.

Adding small lights is an easy way to add life

Now it's time to go back to the point I made in step 3 - variation and variety of the buildings. I copy & pasted many of the buildings but keeping an eye on creating different sizes and rotating them isn't enough to make it believable. The human eye constantly looks for patterns and repeating the buildings ruined the illusion of diversity. The easiest method to fix this problem is by overpainting and adding extra details to the existing buildings and towers throughout the scene. Since I was working on the background it was not necessary to go super detailed.

At this late stage I thought that the scene was missing something and I knew that a low cloud layer would add a lot to the scene but had avoided it because rendering clouds is a very time consuming process. Nevertheless I decided to take that extra step and added clouds via a separate render. Once again Vue's MultiPass render allowed me to easily cut out the clouds from the render and place in the Photoshop file. Smaller additional overpaints and fixes made the clouds sit in the scene really well and created an element the viewer can relate to, especially when it comes to the scale of the scene the clouds added another layer of believability.

The clouds make a huge difference

To finalize the Photoshop stage I played around quite a bit with adjustment layers and colors to give the picture the look I had in mind. Adjustment layers really help me to stay flexible (and in general non-destructive techniques keep you on top of everything that might come up); I went back and carried on refining things until I was happy - masks and adjustment layers are the key here. Last but not least I added some atmospheric glow throughout the scene and a bit of typical sci-fi lens flare.

Close to final and ready for some final adjustments

Even after fiddling around with the colors in Photoshop I did not get the colors how I wanted them, so I decided to treat the picture like a photo! You can do this by either by loading it into Photoshop's Camera Raw or via Lightroom. I prefer the latter because it feels a little more organic and accessible but it does not matter which route you take. In Lightroom I managed to push the overall color-scape to what I had in mind. By pushing up the Clarity I was also able to make the whole image pop a little more and make it a real eye-catcher. It's always good though not to go too crazy (especially with the Clarity); often enough less is more.