The Bug: a making of

The hardest part of this process is to create something from nothing. For that reason, I get my inspiration from different web-pages, look at different artists and concepts for inspiration, and also draw ideas from books, movies, and video games.

My goal here was to design a humanoid insect. My starting point was asking myself a series of question, such as: What is the role of this creature? Is it hostile? Is it a worker insect, or a warrior, or maybe the colony's queen? I answered all these questions before I started drawing.

For The Bug, I began by analyzing real insects and crustaceans through sketching. I paid close attention to their segmented bodies, exoskeletons, number of limbs, and mouth types. Then I made my own creations by mixing and matching those features. I made some silhouette studies to understand the insects' proportions, and again tried to create new creatures by changing the size and shape of their body parts. With this exercise, I got a strong sense of what makes an insect an insect.

For this humanoid insect, I wanted it to be about 60% human (bipedal, with hands and fingers) and 40% insect (big beetle horn, claws and exoskeleton). I wanted a armored hunter. 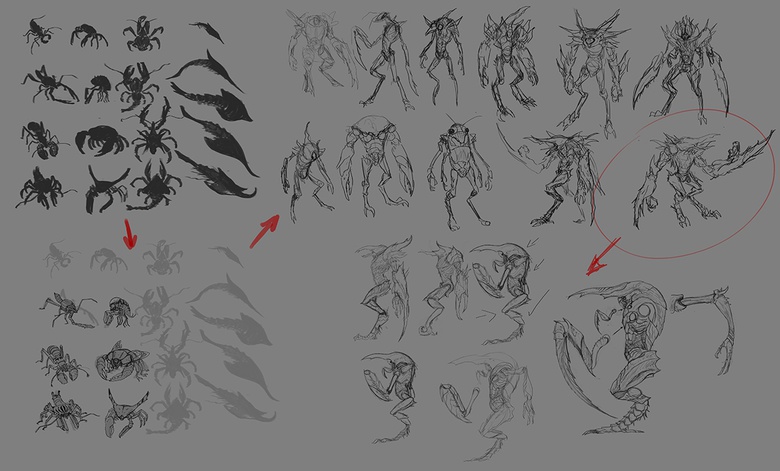 Thumbnailing is an evolving process, as illustrated. Here I was looking for a humanoid insect

Once I was satisfied with the preliminary design, the next step was to sculpt. I used ZBrush and didn't have a specific technique to begin - I just started to sculpt the body from a 3D sphere. Then I made the first gesture of the body using DynaMesh (who doesn't love it?) with the help of the Move, Clay, and Dam_Standard brushes. I used ZSpheres for the limbs.

Once I had a skeleton defined, I created the adaptive skin, and with the Move brush I tried to build up the gesture, volume, and form of the different parts. At this stage, details don't matter; I am to work from the general to the particular. When the sculpting phase is completed, I used DynaMesh and tried to get more details, and define the big planes. 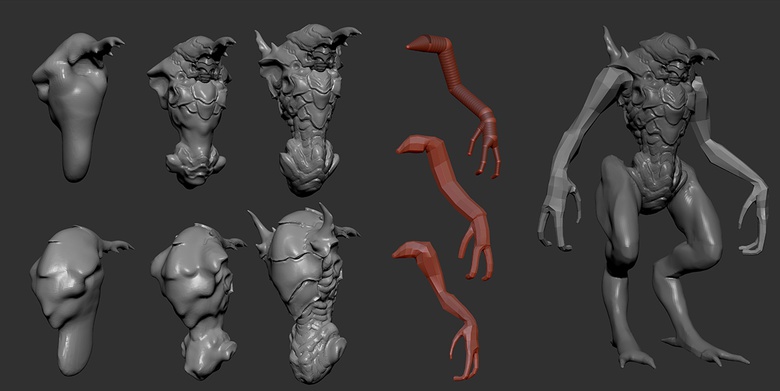 The first pass on the legs looked exactly like the sketch, but in 3D they looked more like chicken legs! So I started again on a new design that I would be happy with. (It doesn't matter how much time it takes - if the design does not look right, keep doing it until it feels right.) At this point I had the block-out ready for the adjustment of proportion, gesture, and size.

Once the gesture is ready, use DynaMesh to give a better finish to the model

This is the first pass of details, using the Dam_Standard, Clay, Move and Inflate brushes to give more quality to the surfaces. While sculpting the exoskeleton, I kept in mind that it must provide protection and mobility. I divided the body into SubTools (head, chest, and abdomen) in order to make finer details later. Likewise, I divided all the limbs into three parts each.

Design constantly evolves: there is nothing stopping me from re-evaluating ratios and improving the creature. In this case, the central claws seemed very big to me, not in harmony with the rest, so I reduced their size. I wanted the outer hands to be those that caught the prey, and the central claws smaller, or something.

Once I was happy with what I saw, I continued to reassess the topology and add detail. I used ZBrush's great tool, ZRemesher, with the following process. With the creature all segmented, I took the hand for example, and made a duplicate. I applied ZRemesher to this duplicate (with default options), then Projected the subdivided hand and used DynaMesh. This resulted in a very manageable polygon count, along with a clean topology. So after doing this for all the body parts, we're ready for the fun part: details! 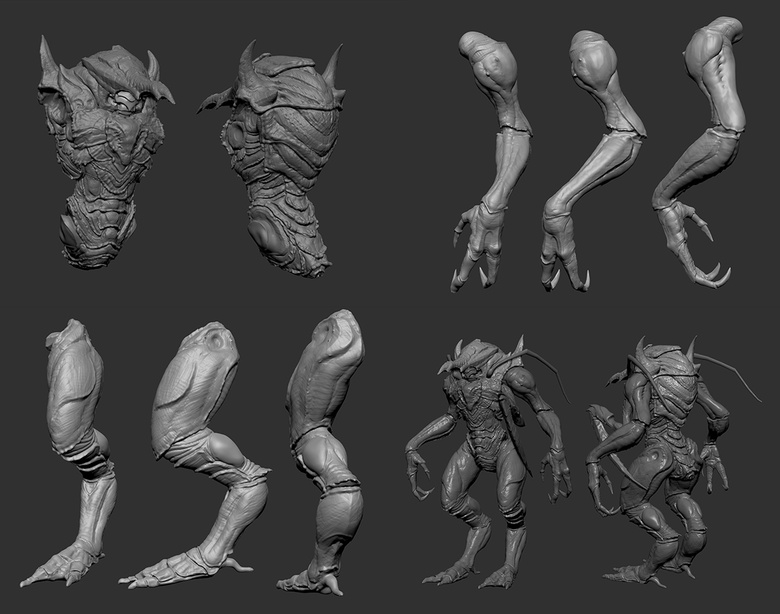 Here I'm focusing on large forms, changing planes and volume, and also starting to give some texture to the surfaces

For the details, I had a number of parts with over a million polygons apiece, for the alphas to look good. Using the Dam_Standard brush, I started making cuts on the surface, trying to follow the direction of the shape or the fibers, and using alphas (very simple ones such as Alpha 58 and Alpha 07). For the spikes, I used the Standard brush with DragRect stroke and Alpha 38 with high intensity.

When sculpting details, the key is to work in layers, thinking in areas of visual rest. I considered where the creature really needed certain elements, such as areas of the shell and body having more spikes for protection. Sometimes when we begin with the details, we just add details like crazy; instead, I tried to think in terms of three (large, medium and small) details, scattered around the area. 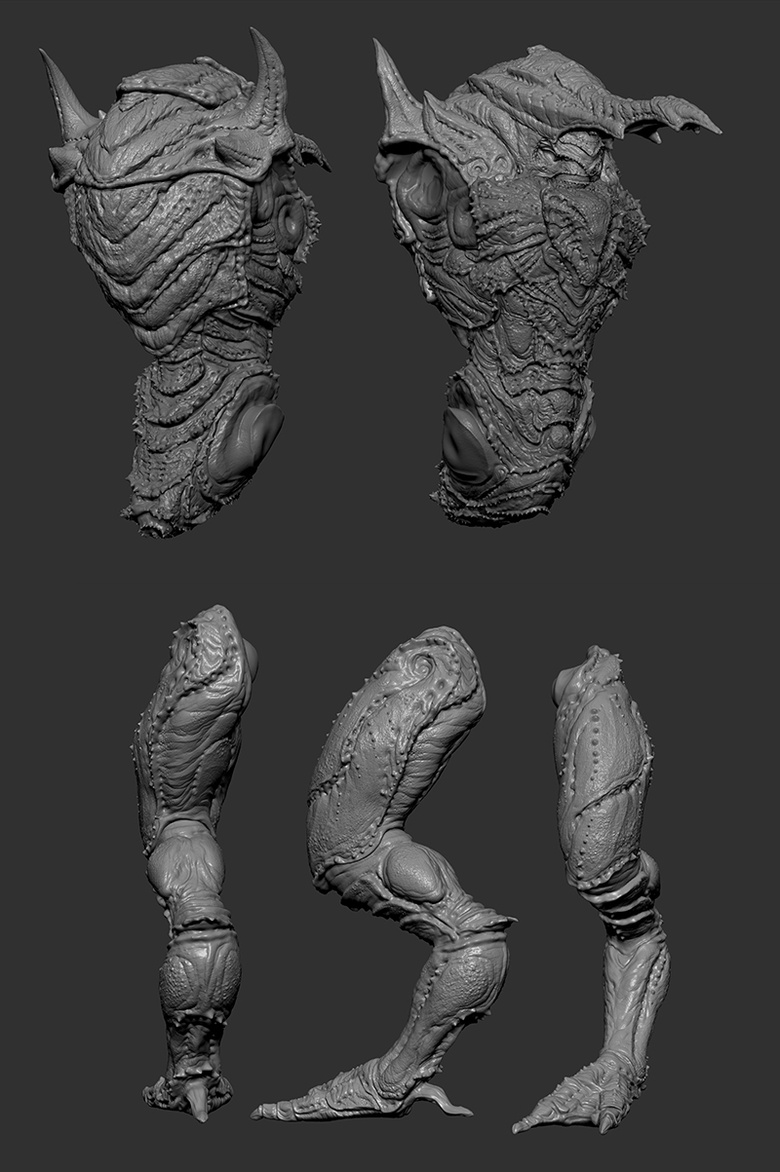 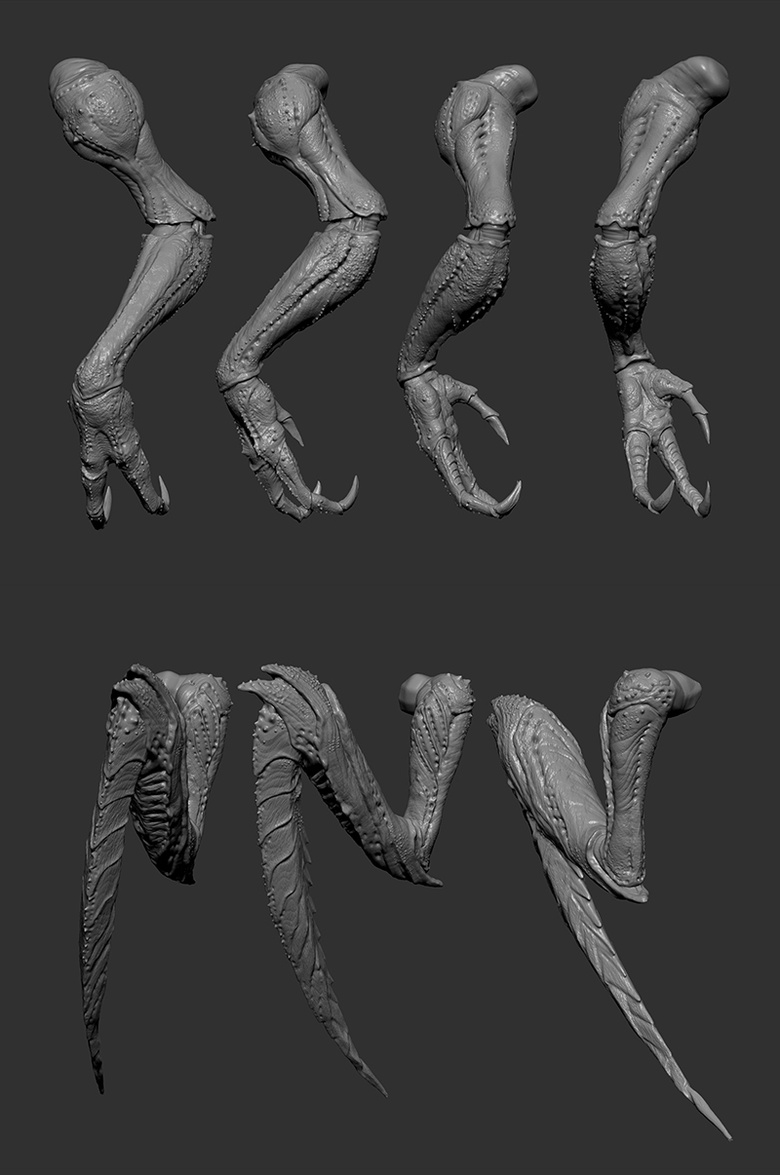 Once the details were ready, I ended up with a model with a very large weight of polygons, so I used Decimation Master on all parts before creating the pose. (The advantage of making an insect is that all its sections are separated anyway.) 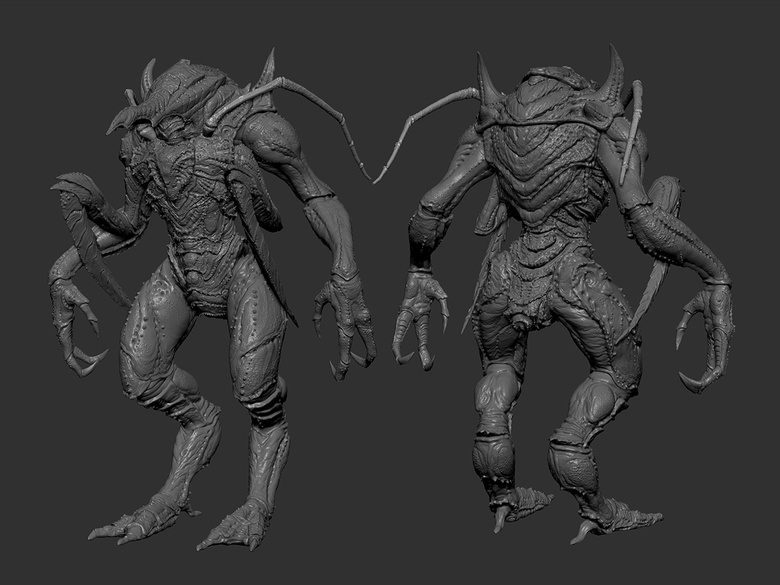 The bug is taking shape!

For the final pose I just used the Transpose tool. Because the creature is segmented, it no problem to simply move and rotate its limbs. It was difficult to decide the final pose and position of the camera, because the detail (on the back, for example) would be missed out of the final render.

Once happy with the pose, I saved the different parts of the creature as an .OBJ and exported it to 3ds Max for rescaling. I wanted to render it in KeyShot, where the illumination algorithms work best with real measurements. The floor is nothing special: just a stretched box, carved with rock alphas I found online and a ZBrush noise plug-in.

Different views of the model, selecting the most suitable for the final image

The software used for the final render was KeyShot, which is very easy and fast to use. I simply imported the creature, created a camera, and started to play with the materials and environments. I had no clear idea of what I wanted, so it was an opportunity for further exploration. While trying various materials, I discovered that the red velvet material made him look like a photomicrograph - like an image of a bug taken under a microscope - so this was my choice. 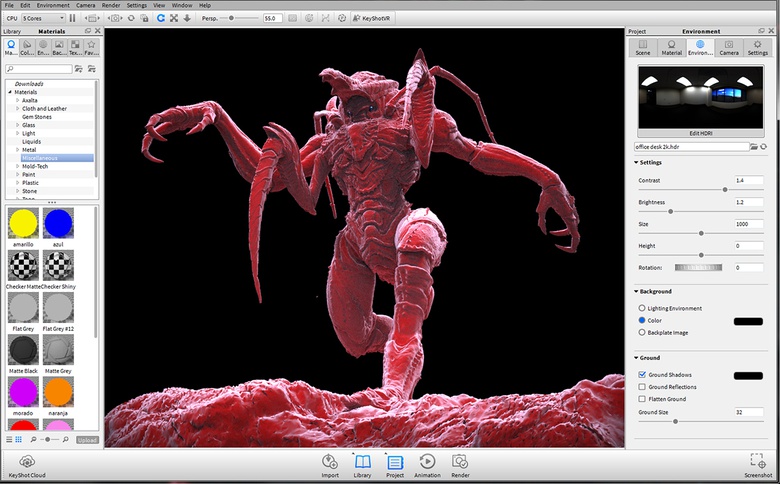 Rendering The Bug in KeyShot

When I finished rendering, I used Photoshop (the best friend of a graphic artist) to do final touches, amplify light, color correction, and contrast adjustment. I also added an almost shadowy background, thanks to cgtextures.com - different types of smoke were added to the image with transparency.

I hope you enjoyed this tutorial, and I hope I've been helpful for those who want to create creatures and need a clear starting point or defined workflow. Thanks to 3dtotal for this space and the readers for their support. Goodbye! 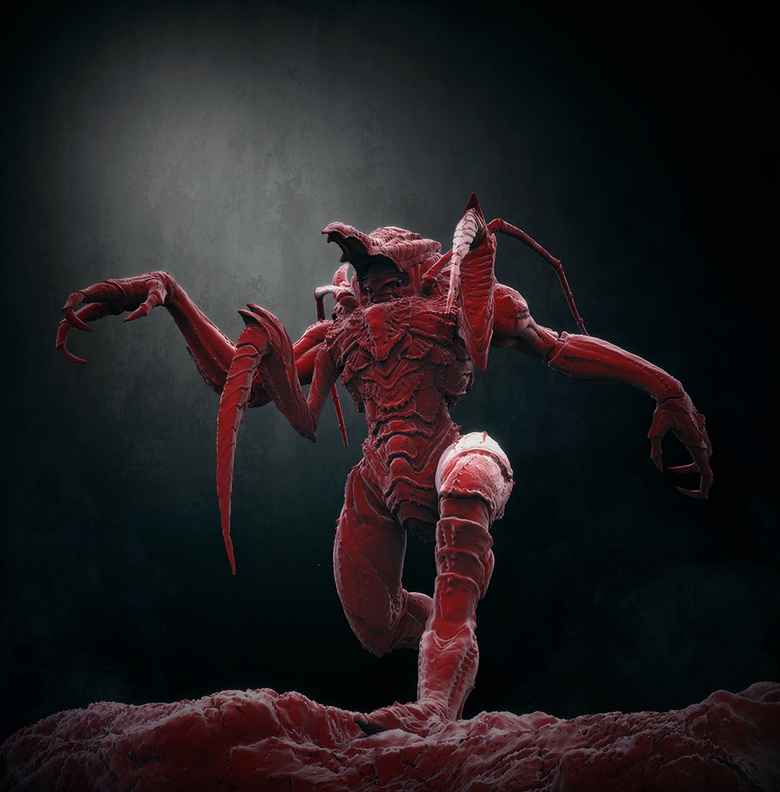 Silhouettes are very important, as they create the first impression that the audience will have of your creation. Use the V key to switch quickly between colors, so you can easily evaluate your silhouette while you work. When you create details, try changing materials too (matte, bright) so you can see better how the surface's sculpting looks.