Adding weathering and grime to a scene

Adding weathering and grime to a scene

This scene incorporates some of the geometry I modelled for a nautical theme set on a ship which was designed to be used in a series of lighting tutorials. I used one of the key components in the form of the steps and a simple support column and placed them on an exterior deck with a metal, panelled wall as a backdrop (Fig.01). 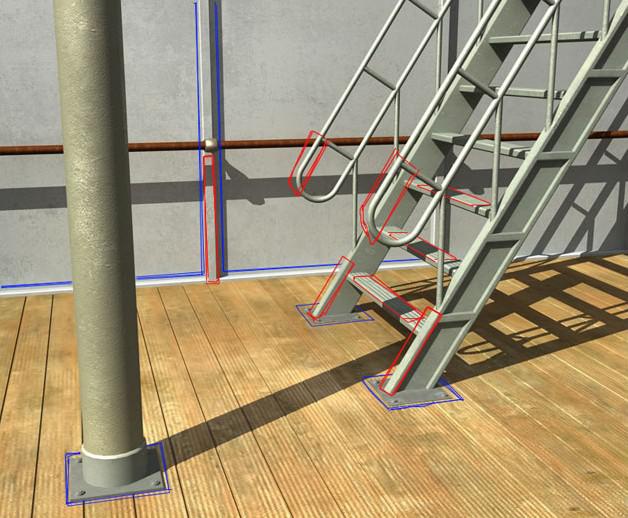 There is a small amount of wear on the panels and the steps but it is quite minimal and the overall scene looks quite clean at the moment.

The areas marked in blue are the key places where dirt would gather and also where water would settle and cause corrosion and rust.

I usually start with the largest area first, in this case the back panels. In Fig.02 you can see the wireframe outline of the geometry and the layer structure so far in the PSD file. I use a base metal texture to represent the painted panels (labelled Paint) and a general rust coloured metal underneath this one (labelled Base Metal). I then apply a mask and by selecting the white areas can erase the paint layer to expose the texture underneath. The red arrow indicates the pattern evident in the mask above. 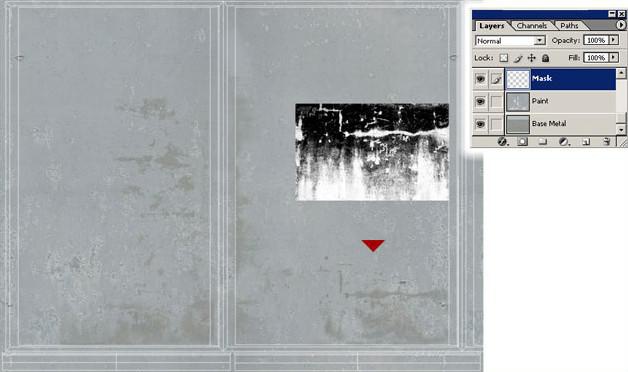 Other areas that would be subjected to general wear and tear are highlightd in red in Fig.01. These are parts of the scene that may show worn and peeling paint due to human contact. The steps and handrails for obvious reasons but also the base of the steps and panelling where luggage and idle feet may have had an impact. In Fig.03 you can see two sections of the texture used for the column and steps. The red arrows indicate areas where masks have been used from V5 - Dirt and Graffiti (inset) 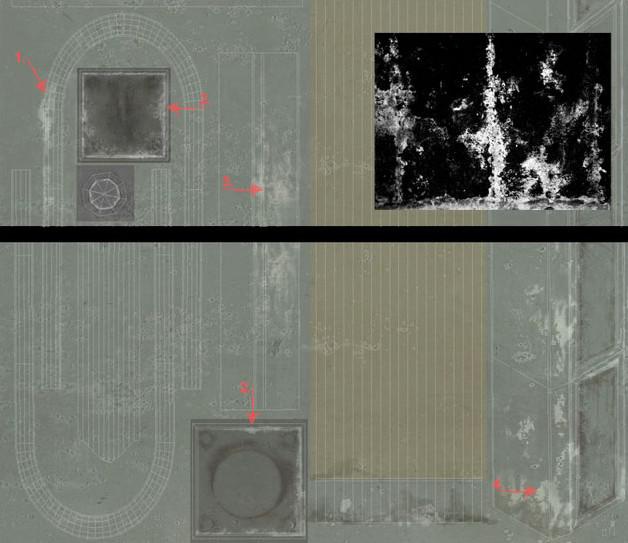 This mask had the black areas deleted and then was set to Overlay with some contrast reduction. The arrows show the various areas that have received similar treatment :

When both these textures are applied you can see how now the scene suggests a vessel that has been at sea for some time and exposed to the elements and passengers alike (Fig.04). 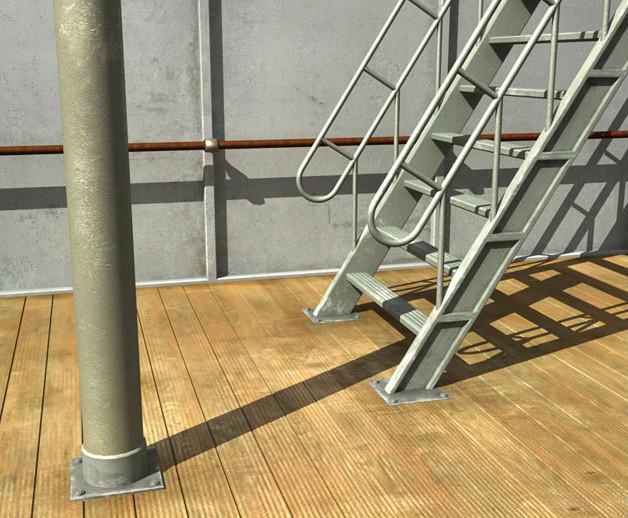 This is what I term as mid range weathering - it neither looks old nor new but rather somewhere in between. You will also notice that I have placed some staining around the baseplates that hold the column and steps in position as well as along the decking where it meets the panels. I am now going to add further wear to the scene and make everything look neglected.
The way to do this is first of all exaggerate what is already there ie. create more areas of worn paint and then add further enhancements which in this case will be grime and corrosion. In Fig.05 you can see that there are three textures on the left which have been used to create the final map. The dirt map has been used to add rust and grime around the base of the column and bolts. The map was inverted (Ctrl+I) and then set to Multiply with the Colour Balance adjusted towards yellow and red. 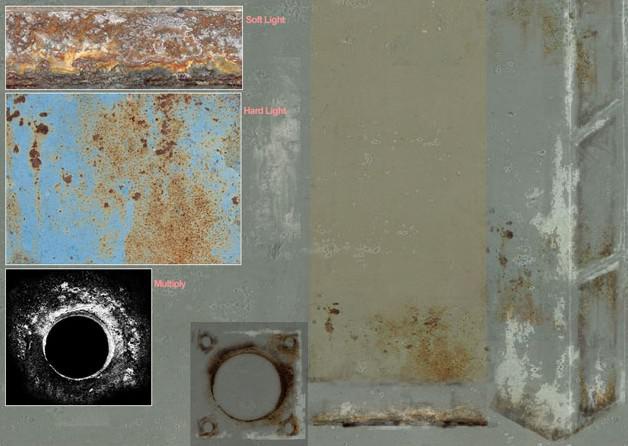 The rust at the base of the column has been extracted from the upper most texture (V2 - Aged and Stressed). With some careful blending this was then to Soft Light. The third and final texture (V2) was used on the columns and staircase similarly and with the blue areas selected and deleted it was then applied with a Hard Light blending mode as indicated.

Regarding the panels : they also benefit from some rust in the corners as shown in Fig.06.

Another texture used in a subtle way to enhance the effect can be seen inset with the result to the right. I also added some worn paint along the panel "beams" by using the same process as before (mask set to Overlay with black areas deleted). 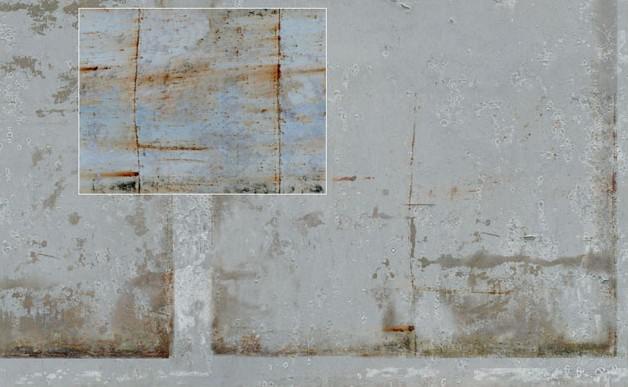 The texture used on the floor also requires some treatment as this would show wear and tear as much as the paintwork. I added some staining along the panel edge using a dirt map but to enhance this I overlayed a texture of old boards with peeling paint to represent the deteriation of the varnish (Fig.07). 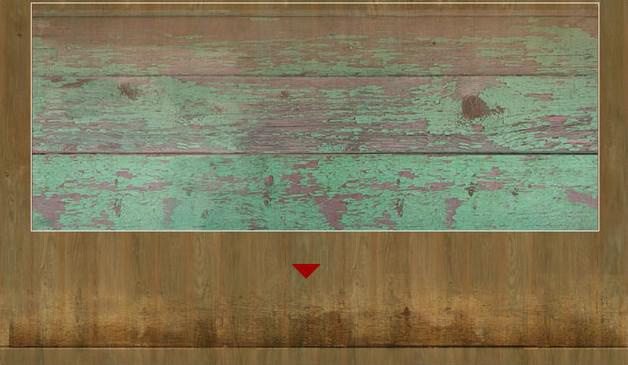 The other key areas that I concentrated on were around the metal floor brackets and the wood directly beneath the bottom step. I modified the dirt map from Fig.02, then made some contrast and colour correction and applied it in a similar manner to create the stains around the fixings.

The last stage is to position a dirt map to suggest the worn varnish below the staircase.In Fig.08 you can see how I have used an edited map to show the effect of human contact. The map had the white areas deleted and then was brightened to a light grey. When set to Overlay it appears as seen on the left. 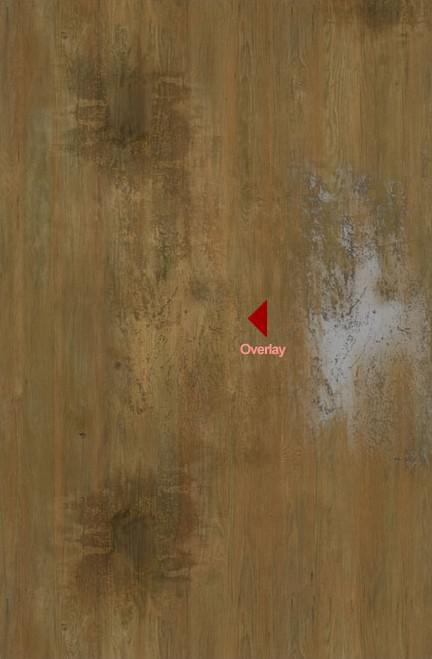 One further aspect worth mentioning is the importnace of the specular maps. In Fig.09 you can see two corresponding versions of the maps used on the floor and steps/columns.

The key thing to remember is that where you place dirt and grime, the surface will generally be less reflective so use these layers from your colour maps to darken the same spots on the specular map by reducing their brightness and setting them to Mutiply. An example of this can be seen in the top right image in the form of the water stains. 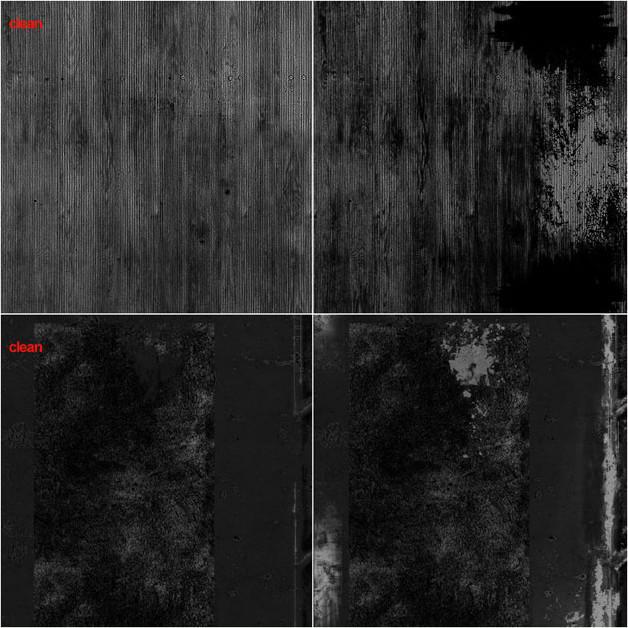 In the case of the staircase I have copied the exposed metal layer and lightened this so that it reflects more light than the paintwork (lower right). Note that if the metal were rusty then the exact opposite would apply and the layer would be made darker. I followed the same procedure to show some wear on the column which can be seen in the top of the lower right image.

The last point is that the clean maps show less contrast overall giving the textures a more consistent quality in keeping with a cleaner surface. By increasing this you essentially break up the way light bounces off the material and thus create a more natural appearance of ageing.

The final result can be seen in Fig.10. 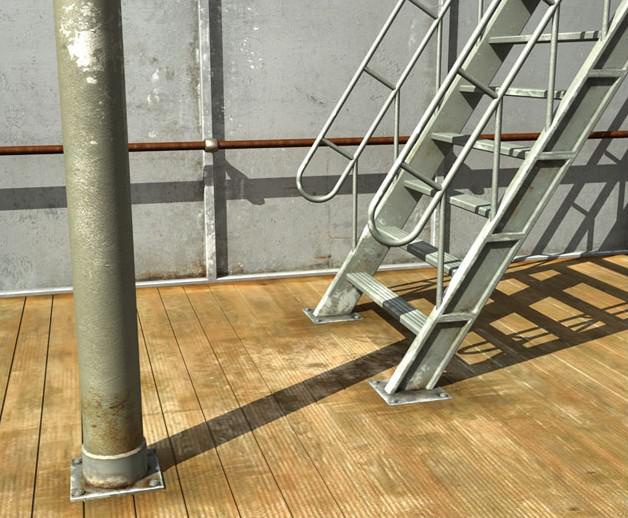