This tutorial is going to cover texturing. Specifically making your textures look like they have more polygons than they do, and emphasising the polygons that you do have. To make this easier on myself, I am tackling something small, a samurai armour shoulder pad. Here is my geometry. It is made out of 24 triangles. Very low polygon. However, it should look much more complicated to be visually interesting. So in the texture it will have false geometry by implying it with light. I suggest you read my Texturing Theory Paper before reading this tutorial. It can be found here.
This tutorial is meant as an example and a follow up to the paper. It is not a How to, it is a detailed explanation of the theories presented in my earlier paper. That is why I do not go into each step and every stage or tool I used.

First, visualise what this fake geometry looks like. For each thing you make, it will be different, so do not use this as a step-by-step, but as a guide to a process. Now since I cannot give you a glance into my head (you would not want to anyway) I modelled the geometry in mind. The armour is made of overlapping plates, with cords tying them together. It has a rounded top, and will probably have a design on it somewhere. Already this looks more interesting than the above simple model. Now personally, I prefer painting all in colour. One of my favourite artists is Van Gogh, because of his colour work. Because of this, I never ever work in greyscale. There are too many colour interactions that cannot be had any other way but to get them the first time through. Sometimes it works to hue shift or change the colours later, but those nice colour interactions normally survive these changes. So as the volume is being layed out in the texture, it will be in Colour. If you like working in greyscale, then by all means, follow along in greyscale.

This is something from Harvy Brown's book Secrets every artist should know. Show the typical way a beginner paints textures, and then point out the things that can make it a lot better. I learned particularly well from watching him emphasise his points with a "before" and "after" rather than just look at his nice finished work.
So here is a texture that describes the above geometry at a bare minimum. Black lines are used like a colouring book to denote changes in surface and material. All colours are equal in saturation and value as well. We can sort of tell what it is, but it would not work in a realistic style game. So what all can be done to improve it? Well to start, let's add some real lighting. This is going to be the first pass and will describe the medium scale detail. 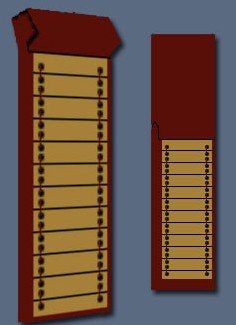 Gone are the black outlines. If you ever take an art class, you will probably hear your teachers say, there are no lines in the real world, only edges. So gone are the black outlines, and now there are clear edges have light and dark. The red was rounded on the top from being a box, to being a cylinder. Using a lighter, less saturated more orange red for the light planes, and a darker, less yellow, more saturated colour for the shadow planes. For this example the light source is from above and slightly forward, so takes all of the surfaces that face upwards, and paint them as if the light is falling on the high res. imaginary geometry. Compare the lighting in this image to the one of the high res. geometry. It is round and smooth on the top like the high res. version, not blocky like the low. Then on the slats, gone again are the black lines, and now there are edges of shadow where they overlap, and highlighted edges of the plane where it sticks furthest out. This recesses the top, and shoves the bottom of each slat out.

Ok, the medium scale geometry is in, now lets add some smaller scale detail. It's good to separate the different materials. Use some of the slat shadow colour around the border of the red to push the slats in and the red out. Use an even darker, near black yellow for the upper corners of each slat. This is because not only is that area shadows by the slats, but it is also being shadowed by the overlapping red, so it should be the darkest area of the slats. By keeping a hierarchy of shadows and lights, you can have a broad range that will describe your false geometry as deeply as you want. The red gives a slightly darker colour on the sides, to imply the edge of it curling in. This was right at the border where it changes to yellow. This single pixel line describes the thickness of the red. At the very bottom of the armour, this thin plane is facing up, so it gets the light colour. For the grommets and the laces, they were too small to need hand painted shadows, and it would have been hard to get them precisely, so using layer effects drop shadow to give them a nice even single pixel shadow. Then the laces, which were a single pixel line, got a second, darker, single pixel line to describe the width and roundness of the laces. Next came highlights for the top edge where they turn in to insert into the grommet, and shadows for the bottom edge where it turns into that grommet. 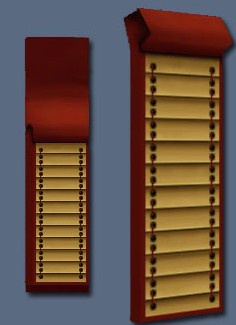 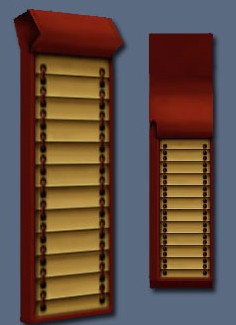 Now this is an important step. The overlay stage. Using either photo, a new layer you create using textured brushes, or filters, you create the "texture" or grit of the material. Before this stage, we could tell the volume of the different planes, but not the material it was made out of. Only the lighting was in. Now use a leather overlay, and a wood overlay to help describe the different materials. The problem is that everything now looks like it has volume, and we can tell what it is made out of, but there is something else that it needs. Specular. The specular intensity and its fall off, describe the surface just as much, if not more, than the overlay layers. A harsh, sharp specular will read as metal, while a broad diffuse specular will read as plastic or skin. The colour of the specular can influence what material it reads as, as well.

By adding a slightly scattered specular to the leather, it implies the glossiness, and the ridged texture. By adding specular to the metal grommets, and an extra set on the top you can clearly tell their metallic nature. The specular correlates to the light direction and further helps describe the materials. This could technically be considered done. There are a few steps however, that can dramatically improve the quality. The first is a more dynamic design. 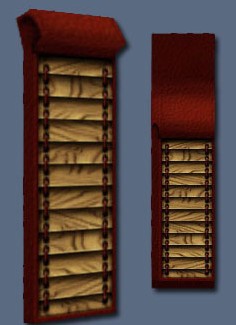 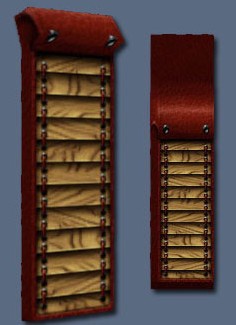 Adding a pattern to the wood helps a lot. This gives the viewers something to look at right away, a focus point. The rest of the detail is still there, but it is background information for the main event. The dragon is black matte paint or ink, so it has only the barest hint of light hitting it on the edge of the wooden slats, and has a deep shadow under the ledge of the slats. The moon however is a silver leafing, so it has a bit of dark tint to hint at the reflective power, and then has a bright white glint along the edge.

Very subtle difference on this one. Using a layer set to soft light, with black and white brush, you can emphasise the focal point. White will bring attention, and black will push away. A bit of white in the centre of the top roll, and a nice area over the dragon ensure it is looked at first, and keeps the other details from fighting for attention. Also a little big of under light was added so the top roll wouldn't be so black underneath. This step is especially helpful with full characters. A bit of light on the face, chest, and shoulders, and a bit of black to push away the arms and lower body, can really lend readability to your texture, and model. The final step is to add some wear and tear. Unless it is for a very stylised game, most things look more realistic with some scratches or five. Little bit of grunge, discoloration, chunks taken out, etc will go a long way to making the texture more realistic. Marbleised overlays that have large areas of dark colours, separated by lighter colour work well on overlay soft light and multiply layers. 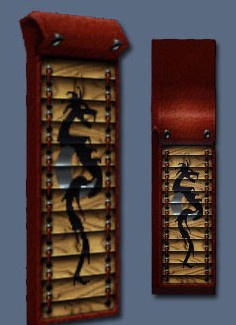 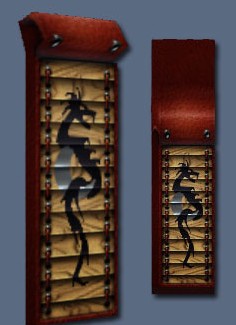