Take your digital painting to the next level with FX

My name is Chris Tulloch McCabe and am a Concept Artist and Designer Based in London UK. I provide a range of services; Concept Design, Look Dev, Art Direction, Key Art, Promotional Imagery and Matte Painting 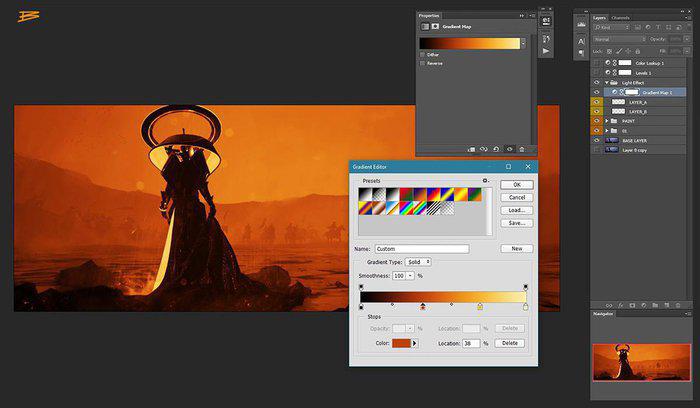 Concept artist Chris McCabe guides us through adding FX to your work in Photoshop, looking at blurs, filters, and lens effects...

Hi there folks. My name is Chris Tulloch McCabe and I am a London-based concept artist. Today I am going to discuss and show some of the little tips and tricks I use to give my paintings a little extra once I'm happy with the painting phase. FX, blurs, filters and lens effects.

I wanted to add some extra splashes, atmospheric clouds and mist to the shot, so I sampled a color off the palette. I have done the process in a separate document with a black background so it's clear what the splash layer would look like. Normally I would paint directly in the painting document, on a new layer, so I can see it in-situ.

In 'A' you can see I just paint a rough splash-like shape with variance in hue and value (done through the paint dynamics section of the brush settings) then in 'B' you can see I have blurred the splash with 'Filter > Blur Gallery > Path Blur'. I have mine set to 'centered' blur with 'tapered' quite high to give the far end of each blur... well, tapered. Then in 'C' I have used 'Edit > Transform > Distort' to give it the desired shape.

As you can see in the below GIF, I then place them as and where I like them in the painting, flipping and rotating and some basic warping to avoid repetition. I also add clouds using a basic cloud brush and some smudging to try and blend some of the edges into the environment and giving the effect of water heavy, Mist.

I added some rain next. I used a basic speckle brush at the desired size, same as in 'A'. Then I used the Path Blur (B). Once I am happy with that you can see below that I start by screening the rain over. Then I duplicate the layer to roughly fill the painting. I adjust the perspective to match the camera with 'Edit > Transform > Perspective' and once that's done I normally like to place them on 3 different planes of depth in the painting. 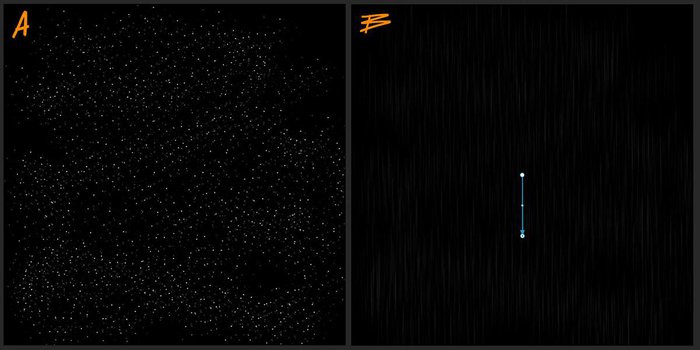 This really helps avoid a flat fake rain overlay look and really makes a difference with believability. The final step is to comp it in to the painting to you own taste. I knocked mine back a lot and softened it somewhat. I also selected rain close to the emitted light of the foreground character and adjusted the levels and colour of that rain to make it seem like passing drops are catching that light.

I like to mimic a dirty lens when creating a painting like this, where I am trying to essentially do keyframe from a film or cinematic scene. So, dust, drops of water,or even scratches dependent on the context. There are many dirty lens textures online which work well, but here I made my own. It's nothing complicated. I create a layer with some white dots and noise (A). Then I use the field blur from the Blur Gallery (B). The settings for the blur are highlights in the blue area.

To get a nice bokeh blur effect you need to adjust the 'Light Range' and 'Light Bokeh'. Once I'm happy with that, I place it in the scene where I would like it. Placement is important because you would only see this effect where there is light. Light emits from the scene and into the lens, and catches the surfaces of whatever is on the lens. So if you place this in a dark area, it will look off and unconvincing. I adjust the color of the drops with the Hue and Saturation to match the emitted light color (C).This also further sells the effect. Then just 'Screen' the layer over and adjust the opacity to your own taste. 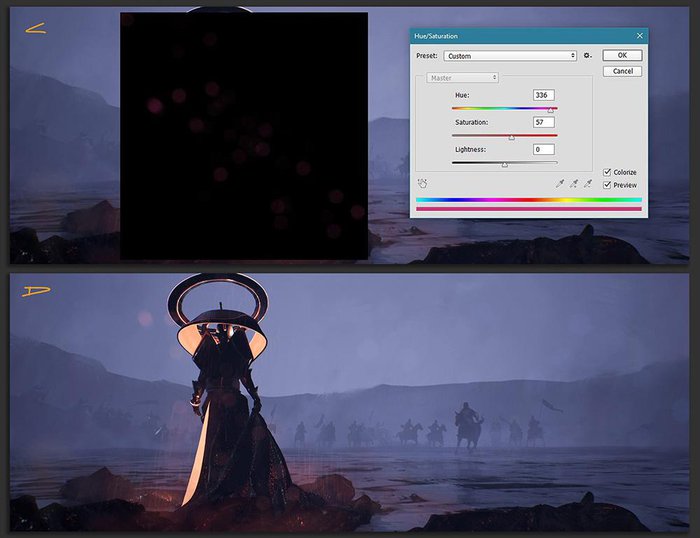 Much like the Lens Drops, this is an effect screened over the painting. I wanted to give the effect that foreground character emits heat from the lit areas of her clothing. I thought it would be cool if steam would rise from her dress where water and rain touch the dress on the floor. This also helps define some of the shape, and gives a bit of depth and separation to her. I use a brush I made that looks like a vapor-esque atmospheric brush, and create a layer with some nice shapes (A). It gets placed, screened, and masked, like before. 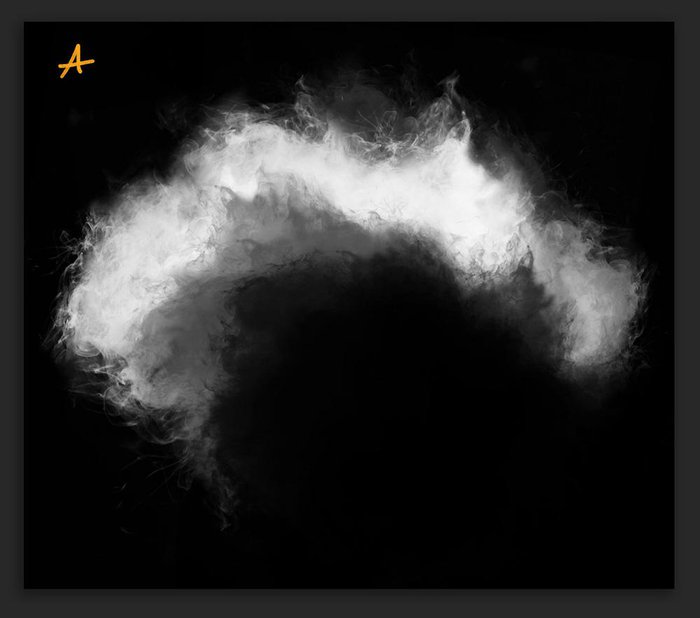 I wanted to give a sense of movement to the horses in the painting. There a few ways you can do this. The ideal way would be to have the horses on a separate layer. You can apply either the Filter > Blur Gallery > Path Blur or just the standard Motion Blur. I didn't have the horses on a separate layer and as they are quite small in the painting, and are fairly low noise background, I just used the lasso with a feather of 1 on the flattened base painted layer around the areas of the horse that would be moving fast, i.e. legs, tails, head, and banners. Then I just applied an 11-pixel motion blur.

Now I apply some intensity to curtain areas of light with the Darken method. It can be used for things like LEDs, fire, or magic effects. In 'A' you can see the layer setup. I make a group with two layers inside. On the bottom layer fill it with black and set it to 'Darken'. The top layer will be the layer you paint the light on with a 100% white brush. Set the whole group to 'Screen'. Then above the top paint layer create a Gradient Map adjustment layer. Open up the layer and create the style of color light you would like to create. If ice, make a cool gradient, or in this case a hot radiating light like in 'B'. 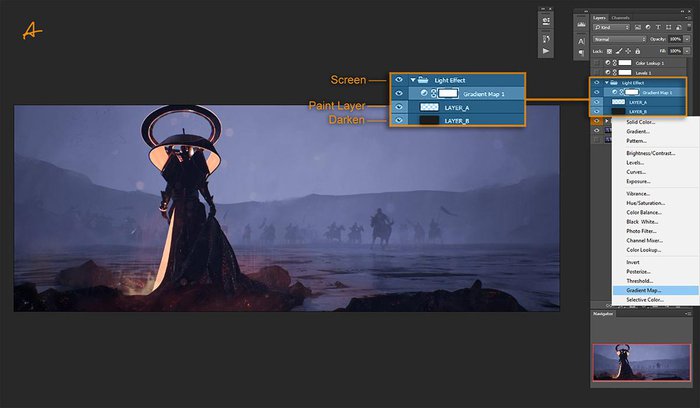 On a side note, when trying to create hot or additive intensity with a gradient, you should have the darkest color the most saturated, and as you move out to the hottest, brightest color, pick a progressively more desaturated color. You will always loose saturation as you get the hotter colors. It's only a slight change but it does sell the heat effect. Next, I paint with a white soft brush in the desired areas. You can use other brushes for some really gnarly effects. It's easy to overdo, as it's fun, so I try and keep it to a minimum. 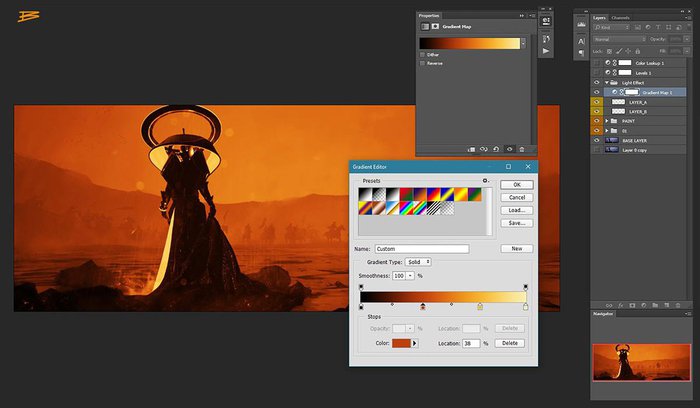 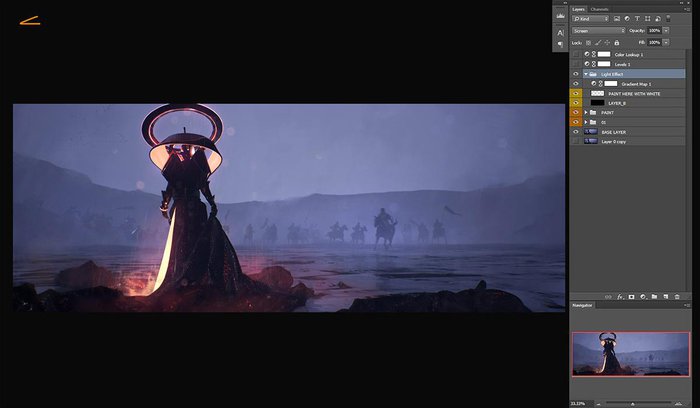 I wanted to further push the idea that in the middle of this wet, cold environment we have this character that is emitting heat. So I am using an effect I first saw on a Scott Roberson tutorial where he used the ripple filter for the heat emitting from the back of a jet engine. As you can see in the image, I made two versions of the ripple. One smaller and the other larger. The smaller one, I use for the heat closer to the source, and the larger one more dispersed for the distance. I painted these both in by adding a clipping mask and painting on that mask in white to reveal it where I want it.

If I do use this effect, it's something I almost always apply last, and I say 'if I use it' because like most of these effects they are easily overdone, and it's not always the right time to use them. If you are trying to mimic the effects of shooting live action, then staying closer to what is physically possible is always a good rule of thumb.

Chromatic aberration is definitely one of these things. It can look bad if overdone. In reality the light that goes through the lens is split up into red, blue, and green, but the blue light doesn't converge at the ideal point (the focal plane). Some more expensive lenses have better optics that try and correct the blue light more successfully, and as a result, it converges closer to the focal plane in the camera and reduces the chromatic aberration. 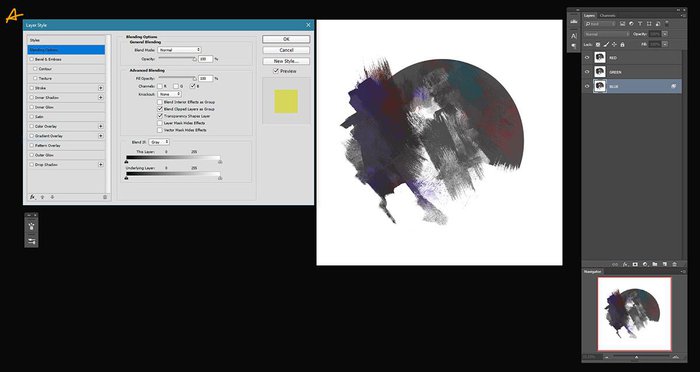 So it stands to reason that most big budget films use very high quality lenses and as a result have next to no chromatic aberration. But as it's an effect we are subconsciously aware of and associate with moving images, it's a nice tool to use. It helps take away from the crisp, perfect digital look your painting will naturally inherit through the process. There are a few good plug-ins that do this for you but the free manual way to do it, is as follows. 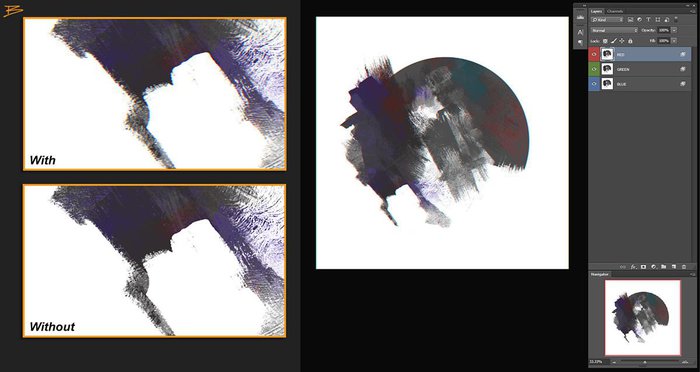 Flatten and make two duplicates of that layer like in 'A', and double-click the bottom layer to open up the layer style window. In the Advanced Blending section you will see three checkboxes that correspond to red, green, and blue under 'Channels.' You want one tick in each box per layer. One red, one green, and one blue. Once done it should look like your normal finished painting. Then you shift the top red layer one way and the bottom blue layer the opposite. The size of you painting will determined how much you need to move it, but bear in mind if it's too small, (say, 2000-pixels wide), even one pixel left and right will be too much. My example was 4000-pixels and I nudged the layers 3-pixels each. Not much, but it's all about the overall painting being greater than the sum of its parts.