by Craig A Clark

In this tutorial, we'll be looking at modeling part of a watch, and looking at the specific considerations of subdivision modeling. 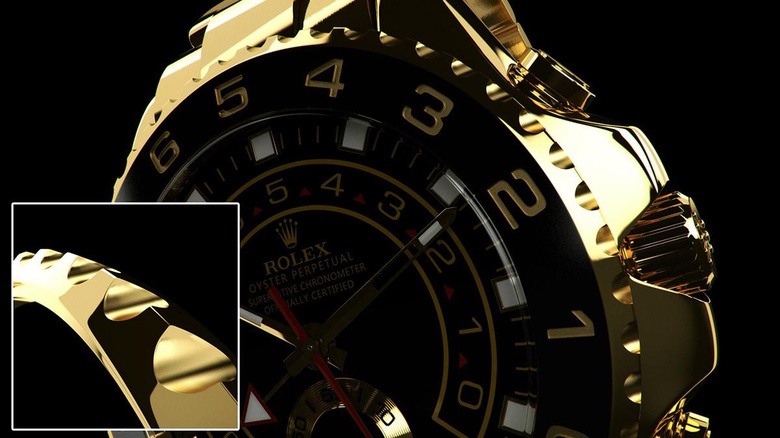 In this tutorial, we'll be looking at modeling part of a watch, and looking at the specific considerations of subdivision modeling.

This project is going to look at modeling an element of a wrist watch using subdivision surfaces, and will look at the techniques used to both hold and control the shape of our model. Beyond that, we will also deal with the requirements for surfacing and UV mapping. Controlling where the boundary comes to rest between one material and another is critical when creating subdivision models.

The first aspect of subdivision modeling is control. The very nature of SubD modeling means everything wants to be smooth and very rounded. This is its strength, but also the way in which it tries to undo you! When you look in the real world, not everything is smooth and softly rounded. We overcome this by adding in extra edges, or edge loops. The effect of this is that when you activate SubD's, the span on a given polygon can be reduced, decreasing the radius created by the SubD process. 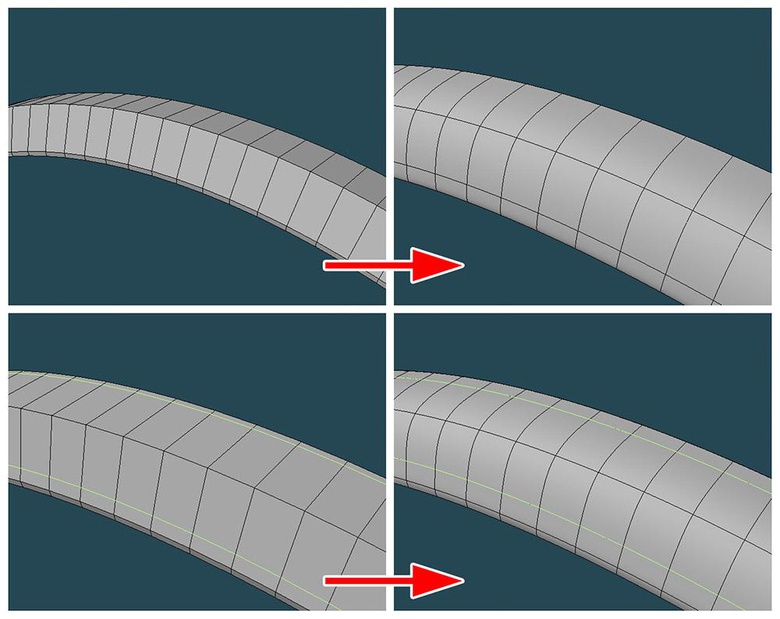 The curve on the edge reduced with edge loops

The bezel of many watches have what look like machined notches, and in much the same way such a thing might be machined from a real bezel, I'm using the Boolean tool to create the base cut-out.

For LightWave subpatches you can only have three or four sided polygons. Catmull Clark SubD's afford the use of nGons, but for reasons that escape me, Newtek have failed to fix UVs issues with Catmull Clark, so they are quite useless. So here I select points for the Split Polygon tool to divide the polygons with more than four sides so I don't have any with more than four sides. 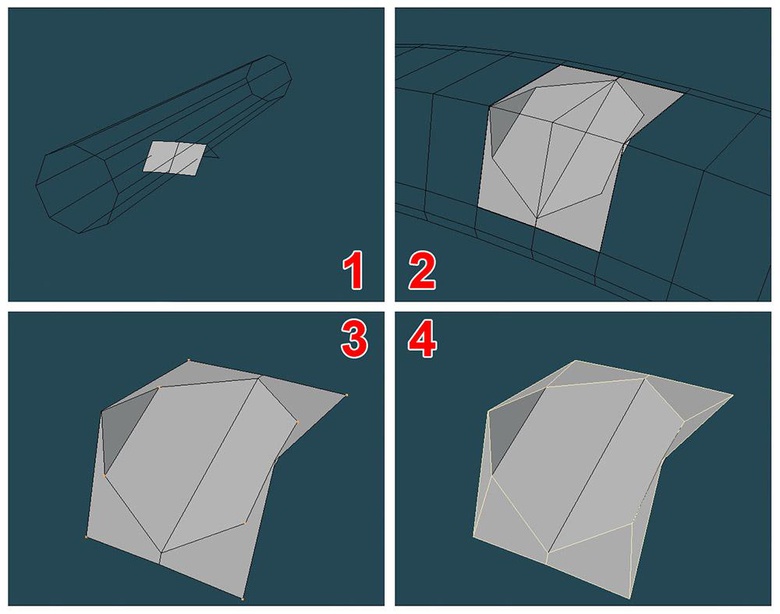 Boolean and Split Poly tool to make the geometry SubD-friendly, three- and four-sided polygons only

In Polygon mode it's easy to see that we have the shape we want, but switch to SubD mode, and it all melts away into a blob!

We need to add edge loops to hold the shape together in a more defined fashion. You can use a variety of tools to add edge loops, most notably Bandsaw, Add Edges, and Multishift. So I have added a fairly tight loop close to the perimeter of the new faces we created, and sure enough, in SubD mode, we now retain the shape we're after. Bingo! 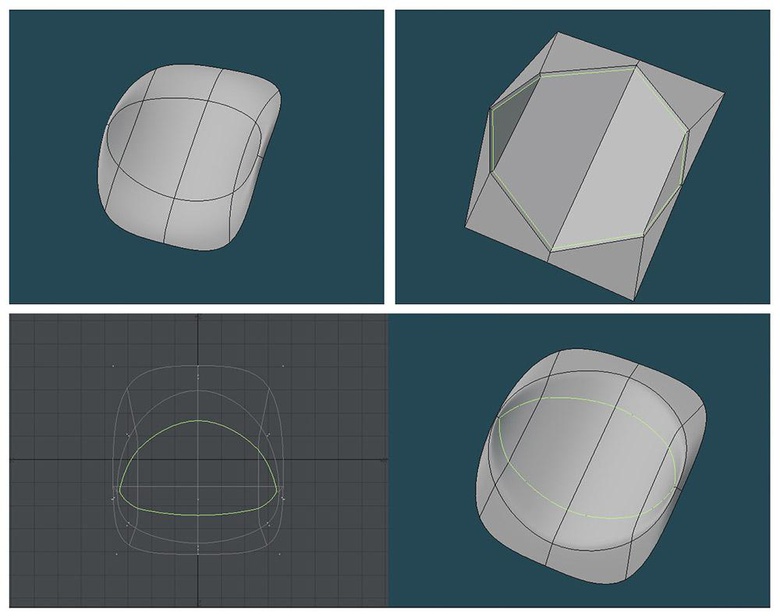 We know that subdivision surfaces are like a smoothed skin, stretched over what is effectively simplified structure, and in doing this edge loops are used to control how much that spread occurs.
What this means is that we have to try and maintain a balance sometimes.

Here we are looking to have a separate surface in the notch, but with our last edge loop, although the shape is maintained you can see that the green surface inside the notch is pulled out onto the rest of the bezel. So we need to add a corresponding edge loop on the outside. In doing this, the boundary between the two surfaces is kept exactly centered on the edge like we need. 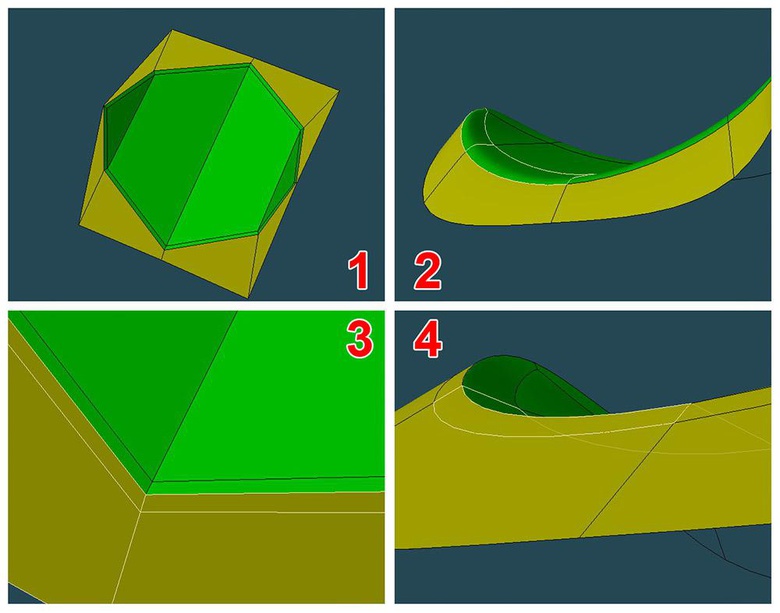 Maintaining boundary positions is important for effective shading and mapping

SubD modeling can leave you with unwanted distortions that have to be smoothed out. In our bezel model you can see how the edges of our notches have turned up and lifted out of alignment with the main bezel compared to the base polygon geometry.

In this instance, because the outer edge of the bezel needs a defined shoulder, we can use this to our advantage, as the additional two edge loops pull things back in to place.

The three lines of edges create a pinch at each end of the notch, so these are merged to leave a single quad at each end, leaving everything nice and smooth. 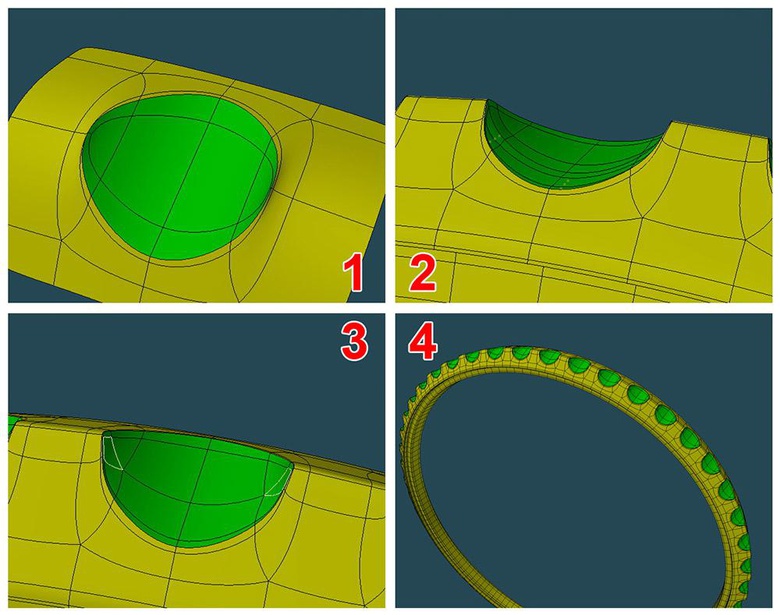 It can be daunting sometimes to build effective SubD models for a given object, and a good way to get a handle on it is to draw the topology first. Ideally you'll have a concept drawing or photo reference, so just sketch out the polygons and how you think you can get the flow you want, and you'll find you're less likely to be redoing something over and over if the flow of polygons is getting away from you.

Top Tip 02: Do Your Housework

With SubD models, you will typically be aiming to have as few polygons as possible, so keep an eye on the density of the base model and, when possible, merge loops to reduce the number of polygons that need subdividing. Flat areas of a model especially are easy to strip down, such as the length of a car door, or straight sections of pipes, hoses, and cables.