Stylize a witch in 3ds Max and ZBrush

Hi my name is Fred Lopes. I'm a 3D generalist currently living in Sao Paulo, Brazil. In this making of I'll show you my workflow and how I created the Black Witch image. It was a really cool project to do. I hope I can help you to use some of the same ideas in your own work.

The first thing I did was to search for references. I had a certain style in mind, the Castle Crush cinematic was my main reference. If you haven't seen it yet, please do so, I promise you it's worth it. So, my goal was to do a version of this character that would fit right into that same universe and style.

From the beginning I knew I wanted to make my own design, but I also wanted to keep some of her characteristics intact and recognizable. I wasn't really familiar with her background story so I had to make one up based on what I'd seen and played in the game. I also looked back at the original concept and tried to imagine the reasons behind each element.

What i realized was that both her belt and staff had organic shapes very similar to a snake. So that's the first thing I wanted to use in my design, not only because it would look cool, but it would also help convey the feeling of danger. Her helmet was really important for her silhouette so I decided to keep it as close to the original as possible. The skulls were also really important and they are directly related to her power, which is turning all the enemies into skeletons.

Throughout the entire project I kept the references opened and always visible. To do this I used a very cool software called PureRef; it allowed me to keep my references always on top of other softwares/browser. Here are a few of the images i used as reference.

Step 02: Blocking out in ZBrush

Since I had no intention of animating this character I didn't worry about topolgy, so I decided to do a basemesh in ZBrush using Dynamesh and ZRemesher. In ZBrush, I started blocking proportions and very simple shapes by duplicating a sphere, stretching and moving the copies as needed, trying to match the original concept. By doing that I kept everything separate and easy to change, since I knew I was going to change things eventually. I didn't care much about any kind of detail at this point. I was only interested in the main shapes.

I tried to keep things very flexible and easy to change until I was confident enough to Dynamesh the parts together and refine a little bit more. After that, I used ZRemesher to give me a good enough topology to export the basemesh to Maya so I could rig and pose her.

I actually posed her while things were still being figured out. If I were to animate her that would have complicated things, but that wasn't the case. ZBrush has a very useful feature that allows you to rig/pose characters using ZSpheres. However, I had no clue of what the final pose would be, so I decided to bring a low-res mesh to Maya in order to do some tests. In Maya, I created a very simple rig with IK handles. That allowed me to do a few poses really quickly. The idea was to do a quick rig and skin, so there were definitely a few weird things happening with the mesh that would need some cleaning up back in ZBrush. 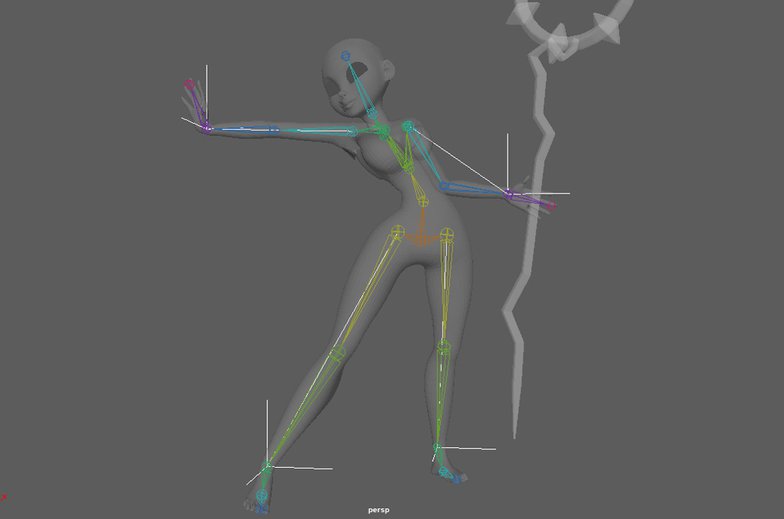 Instead of modeling the dress inside ZBrush, I exported the posed mesh into Marvelous Designer and created a simple dress, which saved me some time. And it already had UVs so it was a win-win. Back in ZBrush i finished modeling the dress adding details to it. Also, I modeled the upper piece of her dress but decided to keep it separate from the lower piece. I also wanted it to look like leather. 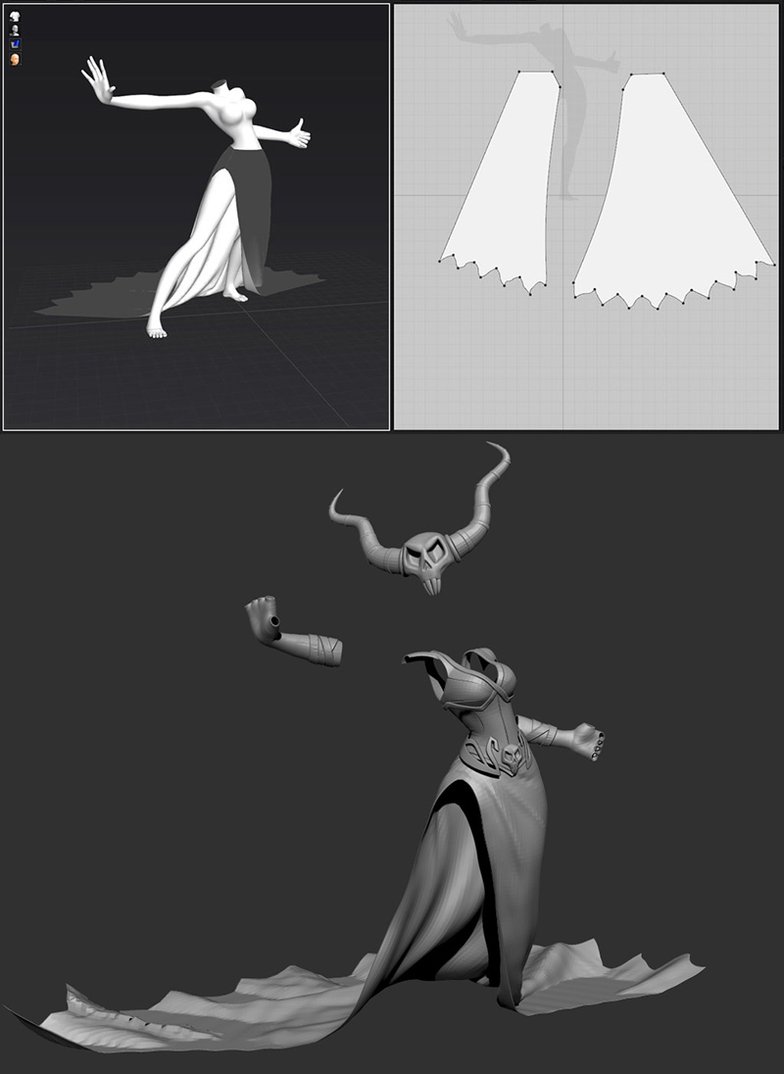 I started by sculpting the staff's overall shape in ZBrush, but soon realized that it would be kind of hard to do what I wanted in ZBrush, so I figured it would be cool to try some procedural modeling back in 3ds Max.

I used a combination of modifiers on top a single cylinder in 3ds Max, as seen in the image below. I took advantage of 3ds Max's stack capabilities to experiment with different parameters and modifiers to make it look as organic as possible, considering I wanted it to be made of wood. One of the modifiers I used was the Cloner Modifier which doesn't come with 3ds Max, but is a free plugin developed by iToo Software. Another win-win situation, because the final result also had UVs ready to use.

To do the UVs I used a workflow that I learned by reading a tutorial by Pedro Conti on his image "The Good Old Times." It's a very simple and efficient workflow that consists of doing the UV seams inside 3ds Max and relaxing them using UV Master in Zbrush. I also took the resulting UVs back to 3ds Max, organized and normalized it. I usually use UV Layout to do my UVs, but I found this workflow to be very fast and easy.

The displacement maps were created in ZBrush where I did all the high frequency details. I used Decimation Master to create a high-poly version of the model that would be light enough to load and work on other softwares.

I took this high-poly decimated model and used it to bake curvature and normal maps inside Substance Painter. I used smart materials as a starting point for almost every asset, mixed some images on top, and hand painted when needed. In a few cases, I used Photoshop to color correct and add some extra detail.

I exported the BaseColor, Roughness, Normal and Height from Substance Painter. Back in 3ds Max I plugged the maps on a V-Ray Material and manually configured the reflection/fresnel amounts. I've used this workflow for most of the assets, the only exception was the skin.

The feathers on her shoulders were actually generated with Ornatrix. The hair generated by Ornatrix can be turned into geometry and textured. I used 3 different textures and scattered then using Ornatrix's "Scatter Randomly" option turned on, and chose 3 different IDs so I could apply different materials to it.

Her hair was also done with Ornatrix and was really simple to do. I tried to keep the volume similar to the hair I modeled in ZBrush, but only used it as a reference. The final hair was entirely generated using Ornatrix's stack modifiers. 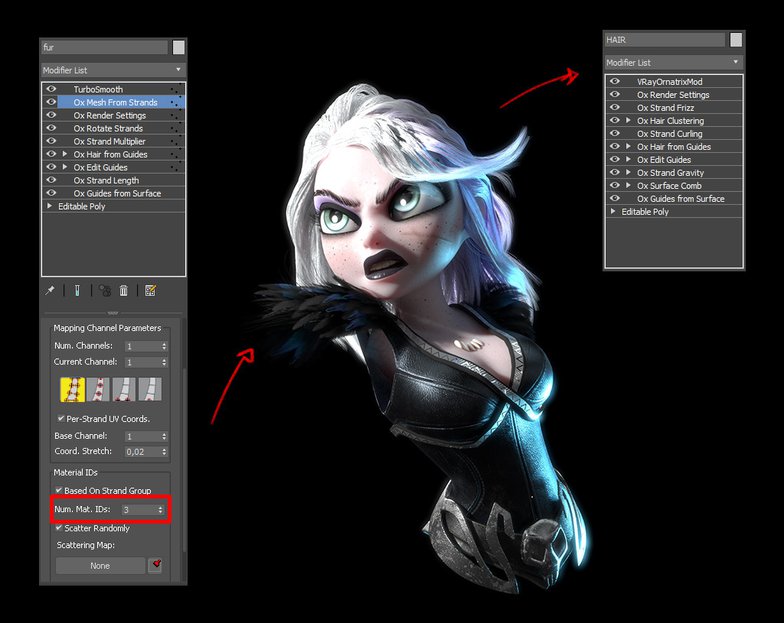 The light setup consisted of a three point lighting technique. With a few specific lights for the teeth and eyes. GI was turned on so light would bounce back from the floor. Now all I had to do was setup a few passes that I could use in post.

The post was done in Photoshop. I used the masks to select specific parts of the image and adjusted things like contrast, color, and saturation. Nothing too fancy. The particles were generated in 3ds Max, with a PArray, and composited in Photoshop. The magic on her arms was basically a distorted plane with a smoke texture applied to it and a falloff pass. Also composited in Photoshop. Here's the final image. Hope you guys like it! 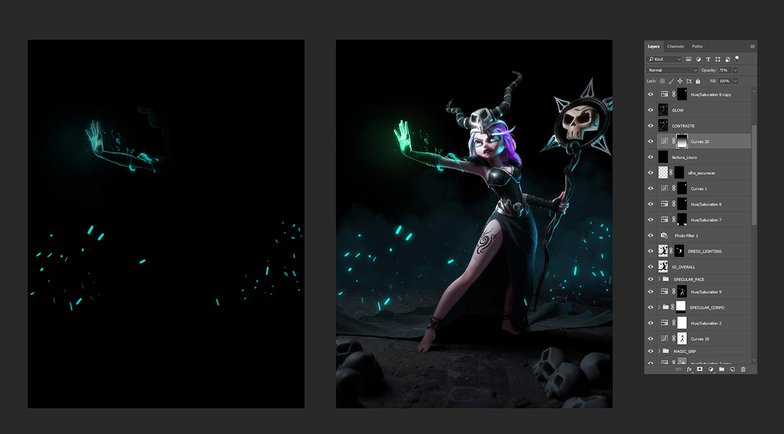 Take a look at our interview with Fred Lopes here