Star Wars Episode 2 - The recreation of the final scene

After the big disappointment of the first episode, I did not expect much from the second part as well, that is why it wassuch a great surprise when I watched it! I liked the end of the movie so much, that I knew that I have to make my own version of it... 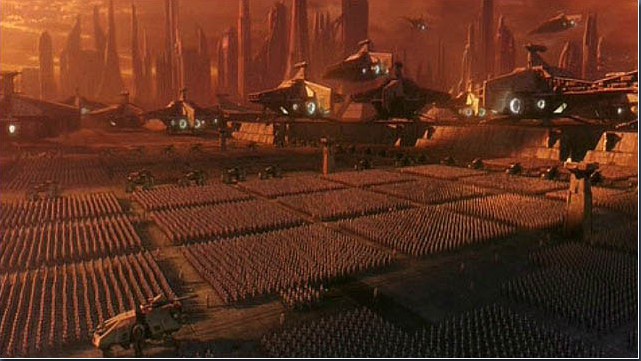 Picture #1 / Screenshot from the original movie (image by Lucasfilm)

The terrible amount of details that was needed for such a project could not have been afforded without at least a dedicated home computer (my has dual Amd MP2000+ processors, with 1 gigs of memory, it was pretty much the maximum I could get out of such a computer). I started creating the scene using 3ds Max and VRay. At that time however, VRay had a top limit on renderable polygons (the newer versions can render unlimited polygons), which was about 1/30th of the scene, so I switched to Brazil. It was the perfect choice as I figured out later on...

Most meshes that are in the scene are downloaded from the web (mostly from scifi3d.com), the rest of them were box-modelled. The texturing and composition was done completely by me.

First, I created the ground, on which I placed the landing pads. This was the basic setup, I saved the file. After that, every new component was added to the scene by merging from another document. For example, to add another element to the scene, I opened up a blank scene, merged the basic ground plane and landing pads into the new scene and added the elements (the ground and the landing pads provided me with the measures, and outline of the scene, so I knew exactly where to place the new things). This was necessary, because the overall scene contained too many polygons, and it was almost impossible to work in. After an element was created, I merged it into the final scene. To be able to use the final scene for rendering, almost every element was turned to box-shape in the viewports, to save computer resources. 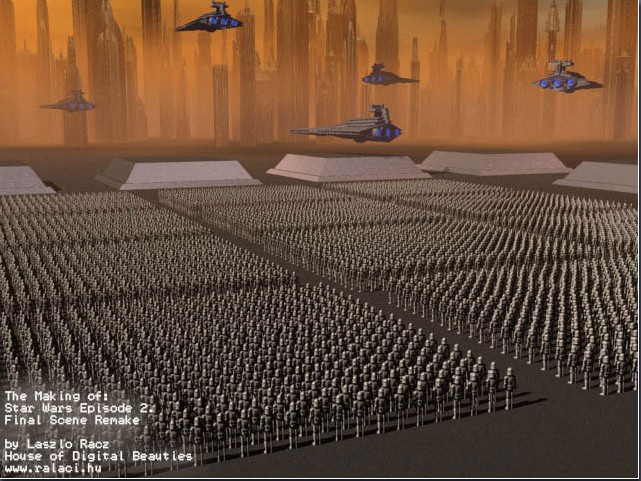 Picture #2 / Setting up the basics of the scene, most of the proportions are wrong

Texturing was done during the element creation phase, so only the final and textured meshes were merged into the final scene. The background is a photo (the mountains and the clouds), it would have been simply too much for the computer to do that in 3d as well. The rest of the textures are tiled jpg pictures, mixed in different ways using the "mix", "blend" and "falloff" materials. I avoided using raytrace materials, they would have probably crashed the rendering if I did. There is a slight "film noise" effect on the rendering, so it looks a bit grainer. 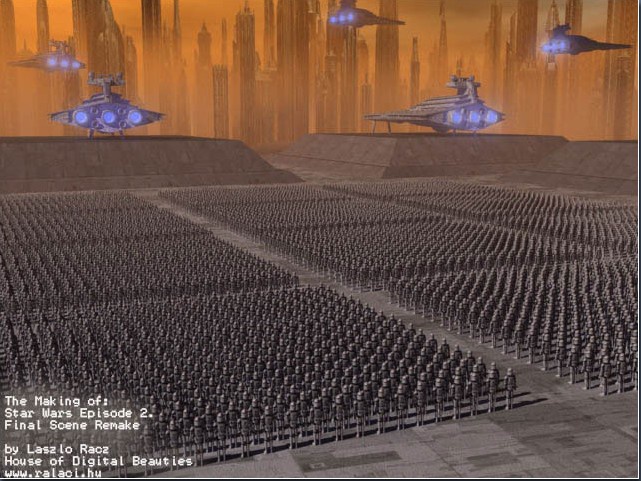 Picture #3 / The scene with textures added to it, also, some of the proportions are corrected

The biggest challenge was to create an impressive, huge army. In the scene, there are between 6000-8000 soldiers. I started by texuring the first soldier, I tried adding not-so-high quality materials, to save rendering resources, however every soldier is equipped with an UVW map. There are two types of soldiers I used, the troopers and their commanders. All of the soldiers were "instanced" from the first ones. When it came to duplicating them, I did not use the built-in "array" feature of Max (I hand placed them), because I wanted it to look much more random, so basically every soldier has a unique position in the scene for added realism... 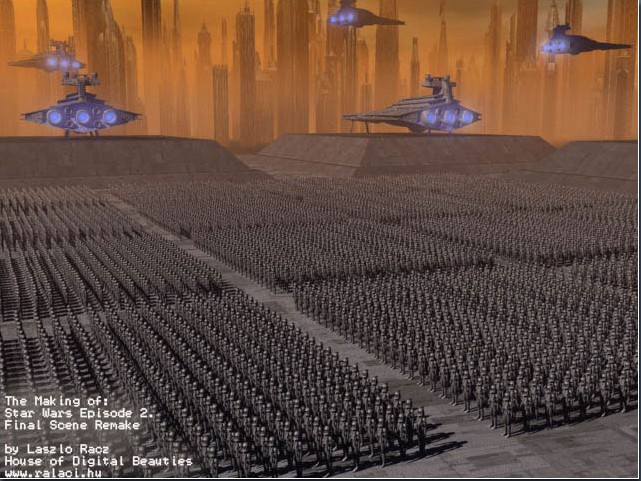 The amount of soldiers was too much for a home computer, so I used the following trick: before duplicating, I applied the "multi-res" modifier to the two basic figures (the trooper and the commander type). This modifier reduces the polygons of the mesh by the amount we wish. During the creational phase, I set the soldiers to only 0.01% of their polygons (which was pretty much only a cornered ball), but was ideal for seeing where they are (and the computer did not freeze from the polygon overload). For the final rendering, I used 6 or 7% of the overall polygons of the soldiers, even with such a low rate, there were 30 million polygons in the final rendered scene, but since an individual soldier is so small, the loss of quality due to polygonal reduction was not noticable. 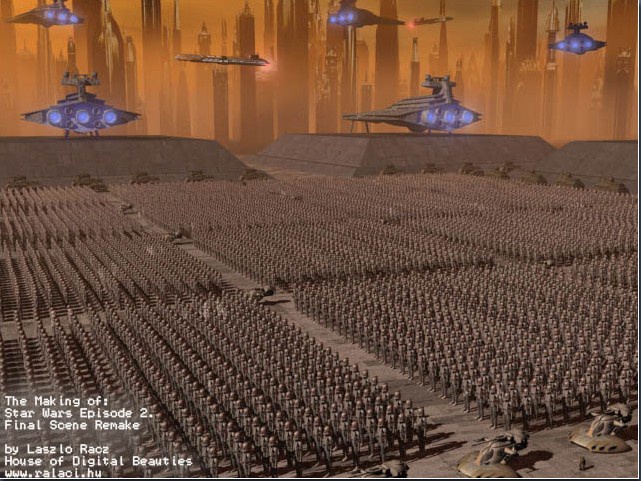 Picture #5 / When I added an extra 2-3000 soldiers, the computer run out of memory and created 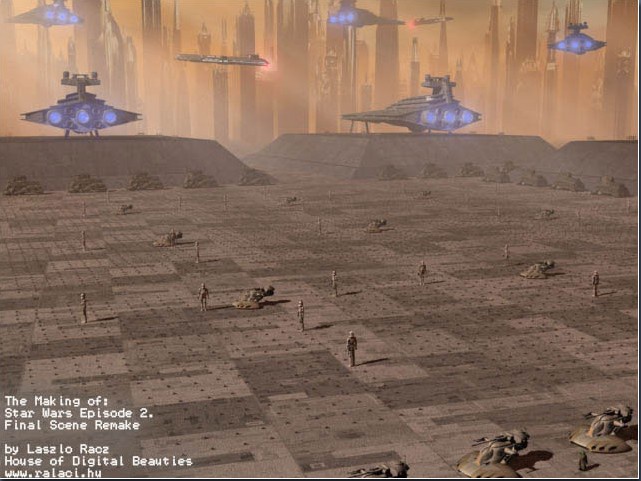 Picture #6 / During the workflow, using the 'multires' modifier can save computer resources

Altogether in the scene, there are about 15-20 omni lights, most of them are used for starship engine glows. There is one keylight on the top of the scene to simulate sunlight. Right beside it, there is another light, which is used for ambient illumination only. There is a spotlight from the top-left corner of the picture, aiming at the soldiers. This spotlight creates the volumetric light effect in the scene. The big shadow that appears in the middle of the picture is a star destroyer put in the front of the key light, not very far from it (to get the right size for the shadow). The engine lights have "glow" modifiers added to them. The color of different lights and the background had to be changed until they matched.

The rendering was done using the Brazil rendering system. Normal lighting was not the best looking, but using Global Illumination also was not an option, since it crashed the computer even with the loweset setting. Photon mapping solved this problem fortunately, I turned it on, and added it to the scene's lights. By using photon mapping, the rendering in 800x600 was finished in 7 minutes! No area shadows, only normal shadow maps were used. 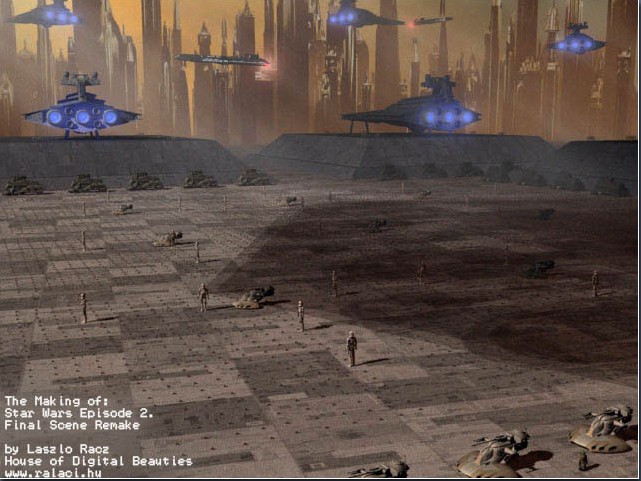 Picture #7 / Setting the final lights and adding the main shadow

Some of the proportions in the picture may appear weird if you examine them closely, this is something I have look out for in the future...

I put Yoda in the bottom-right corner of the picture to.... well, to make some people smile!

I made a different looking background for the picture, but it was too "dark and evil", anyway, here it is, you can decide which one you like better... and thank you for reading this tutorial! 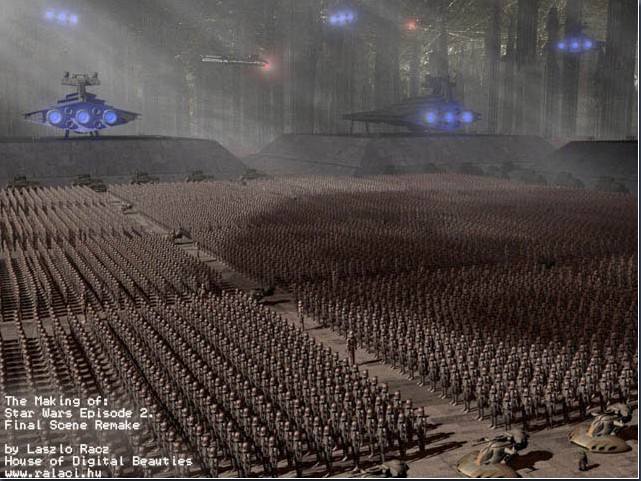 Picture #8 / The final version with a different background, the volumetric effect is much clearly visible in the version 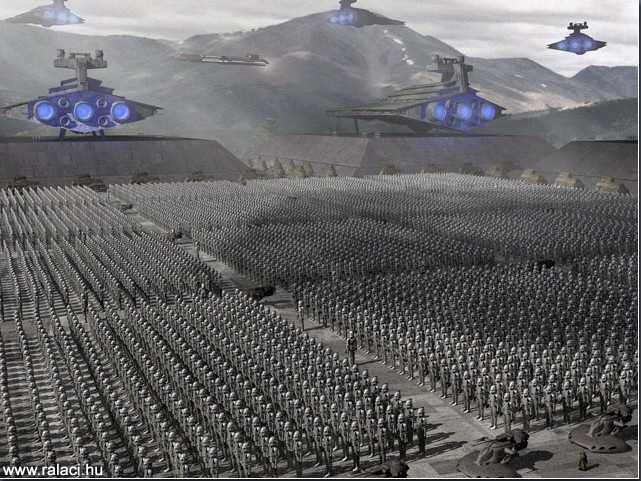 Picture #9 / The final version (no postwork) Written by: Laszlo Racz