In this tutorial I will cover the creation process of my illustration Shack in the Forest, which is a whimsical style artwork that involves environment design in Architecture and Nature, plus some characters. If you like magical forest scenes, this is the place to be! I hope you learn and have fun!

Step 01: Getting in the mood and warming up

A wonderful way to get the right inspiration for making an artwork is music. I usually listen to Native American music when doing my art, and this time I had the company of the album, Sacred Spirit, which gave me the proper mood I needed. I started up with a basic sketch that would allow me to figure out the composition. Sometimes it takes a lot of iterations until I get the right camera angle and elements distribution, but this time I felt really happy with the very first sketch, so Why not give it a try?, I thought. 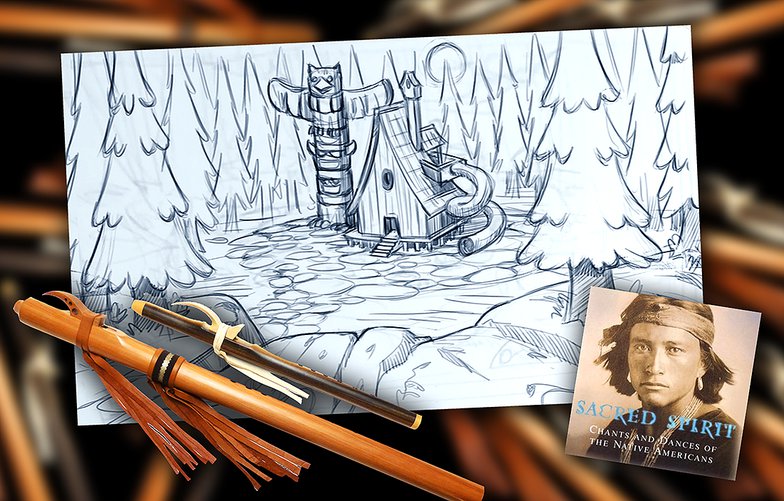 Listening to the music of Sacred Spirit while sketching the composition

Step 02: Getting started with the 3D work

For the 3D work of the illustration, I started up with simple low poly models done in Blender, in order to block out proportions and have basic shapes. I applied the same process with the Shack and the Totem. In case you don’t have basic modeling skills in Blender, I highly recommend you look at the Blender Guru YouTube Channel; Andrew Price is the most talented artist and teacher when it comes to this software.

Click here to find out how to make a slide

Above: Overview of the low poly models done in Blender

I modeled the Shack in Blender in separate pieces, which were: the main body, the base of the shack, the roof, the chimney-like tower, the tower’s window, the balcony, the slide that comes from the balcony, and the stairs.

Above: The Shack - Time lapse of modeling in Blender

I modeled the Totem in Blender in separate pieces, which were: the eagle head, the pair of wings, two vertical boxes, the pair of horns, and the totem floor base.

Above: The Totem - Time lapse of modeling in Blender

From Blender I exported the OBJ files of every separate piece, then imported the models into ZBrush. Before getting to the details, the meshes needed to have a good resolution; to achieve that I used ZRemesher following these steps:

The mesh geometry was evenly distributed following the low poly model. If you’d like to have deeper knowledge on ZRemesher, here’s the most useful video online:

Above: ZRemeshing example - The eagle head

By using Dynamesh I was able to keep modifying the geometry, while new polygons were automatically created. I made all of the details with basic brushes, such as Standard, Trim Dynamic, Pinch, Move, Inflate, and Dam Standard. In some cases I had to build up new separate geometry, like in the eagle’s eyes or claws; I used the IMM Primitives Brush, which allowed me to make spheres or boxes that I later deformed and detailed.

Step 07: Detailing all of the pieces

You can see below how all of the pieces ended up, with the help of ZRemesher, Dynamesh, and some hours of work.

Above: ZBrush to Photoshop workflow

Step 08: Rendering from ZBrush and starting color in Photoshop

In Photoshop, I made a perspective grid on top of the initial sketch, and took this reference image to ZBrush, where I moved the camera until the 3D models matched the perspective. After that, in ZBrush, I made BPR renders of the elements and exported a Shaded Pass and a Silhouette Mask Pass. In addition, I used the ZBrush to Photoshop plugin, to get separate silhouettes of each SubTool; that enabled me to color  pieces independently with perfect selections. Download the Perspective Plugin here.

Above: ZBrush to Photoshop workflow

I put my hands to work on the background elements little by little, to give myself a hint about what the color palette and atmosphere would be like. Afterwards, I placed the renders in the correct position on my Photoshop canvas.

Above: Placing the 3D renders in the background

I did a lot of coloring and brushwork on top of the models, matching the same cool and warm temperatures from the BG palette. As a result, I was continuously giving the same painterly style to all areas of my image. About 30 hours of work had passed until this point, which was making me tired. At this point I was quite happy with the result, and I was about to release my work right away; but an unexpected twist in the story took place...

Above: Brushwork tips and ticks in Photoshop

My beloved girlfriend, a passionate archaeologist, gave me awesome advice on how to make my scene look better and evoke that ancient spiritual mood.

“The forest isn’t looking alive”, she said. She pointed that things were looking boring in terms of color contrast and variation of elements. Hence, the following step was making more colorful details and broadening the variety of elements in the scene. In my case, I added rocks, flowers, fireflies, cut lumber, mushrooms, fog, and even  a bear and a magical flute player girl. All of these had to make a difference for sure! 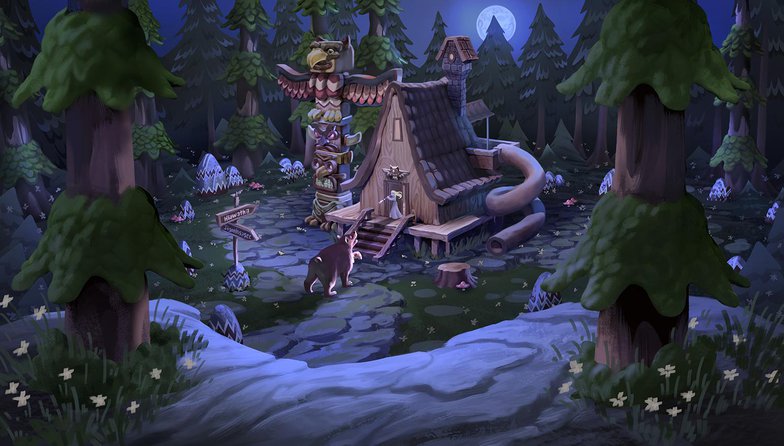 Step 12: Color tweaks and some other effects

It was time to use some Color Dodge here and there and make some Level Adjustments, to give subtle variations of color and light. I also blurred out the outermost areas in the canvas in order to keep the visual focus on the center. With all of this done, my Shack in the Forest was finally ready to be published! 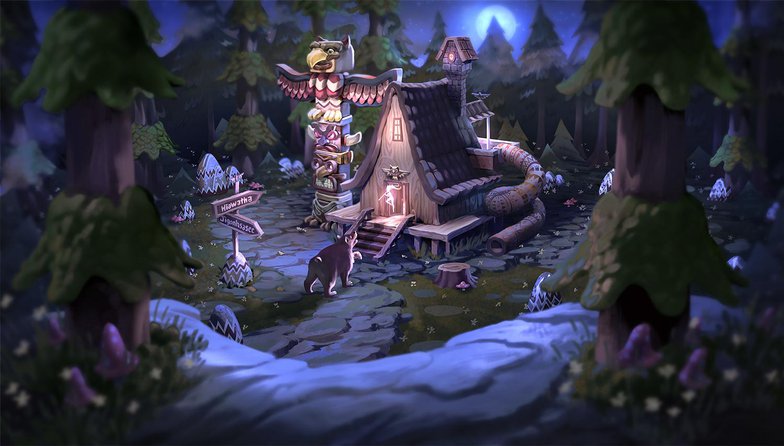 Top Tip: All we need is just a little patience

Sometimes, when you believe your image is finished, you might be wrong. Ask for feedback and you’ll receive a fresh eye, then you can work further on your creations until you feel they really look complete. You’ll be amazed!