In this tutorial, I will explain the process of making a dragon based on a concept by Chris Ayers. I will share some of the tips and tricks I used to make a stylized and eye-catching render through the use of expression, colors, and lights. By the end of this tutorial, you will learn not only some software techniques but also some of the principles of art.

To sculpt the base, I started from a sphere as usual, and made the head and torso. I used shadowbox to make the wings. I sculpted one hand separately and duplicated it, and once everything was in place, I merged and dynameshed everything. At this stage I just wanted to have the main shape there. One of the common brushes I use at this stage is the Snake Hook brush. Also turning on Sculptris Pro would help a lot to avoid using dynamesh often. 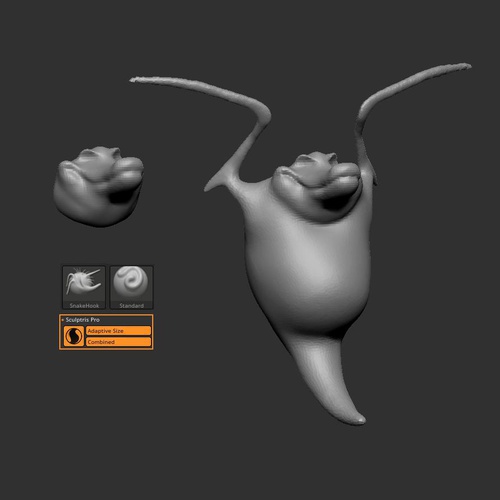 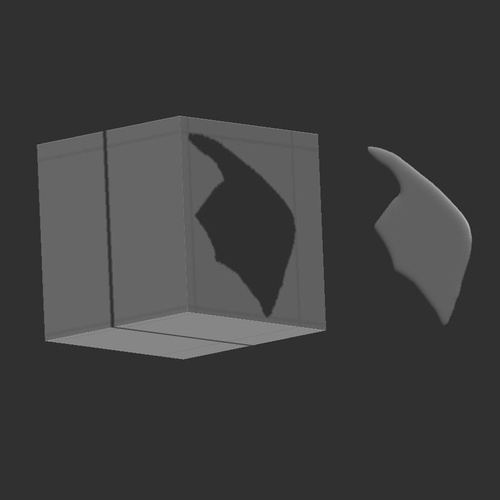 One of my favorite tools I use in ZBrush is gravity. When I sculpt anything similar to wrinkles and folds, I increase gravity from zero to 50 or so. For the love-handles I used Standard, Inflat and Formsoft with gravity on.

To add some details to the wings I used the Standard brush with the lazy mouse on. For the bumps on the back of the crocodile I changed the stroke type to spray and adjusted the settings similar to the image below. My main goal was to have some scattered bumps with different sizes.

Using standard brush with Lazy mouse on, and adjusting the focal shift, I sculpted a ridge pattern on the wings.

Since I didn’t plan to animate the character, I went a little easy with the retopo and mainly used ZRemesher.I grouped different parts of the model and with “keep groups” on I ZRemeshed the model. I took the model into 3ds Max and adjusted the toplogy of the model. Once I was happy with the toplogy, I used Headus UV Layout and unwrapped UV for the model.

I turned a colorful scale texture into a black-and-white image and imported it into ZBrush. Using the Standard brush with RGB on and Z-add off, I painted patches of scales. Later on, I hand-painted between the patches. Probably the most time-consuming part of making this dragon was painting the scales. To convey that the dragon’s stomach is inflated because of over eating, I drew the inner scales bigger compared to the ones on the sides of the stomach. Once I was done with painting the scales, I exported the polypainted scales to use it in the following steps. Grayscale maps such as this can be quite handy, both in ZBrush and the software you want to render your character.

Using Mask By Intensity, I turned the polypainted scales into a mask and inverted it. I have turned off Polypaint so you can see the mask better. Remember you would need enough points/polys on your SubTool so your Polypaint and subsequently your mask look sharp and crisp. Then I masked or unmasked some areas that were not appealing to me. Then I used Inflate with a negative number from Deformation submenu. Number -1 or -2 did the job for what I intended. 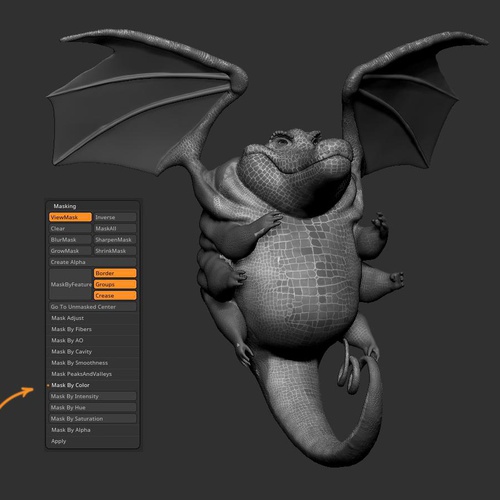 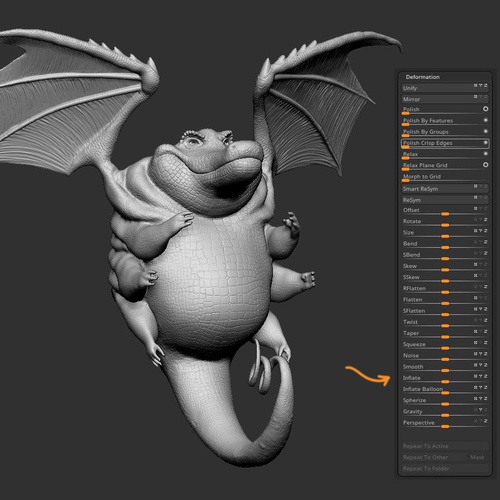 This part was probably the easiest part since it’s a stylized character with a few colors from the color palette. Once I painted the main 3 colors, I imported the Grayscale Polypaint from Step 4 as a texture and turned it into Alpha.

Unlike the previous step, this step would be quite time consuming to get it right, a dragon with 6 hands wouldn’t help either. To achieve a believable result, with the right expression, make sure to spend a good amount of time. A sloppy pose can ruin all your efforts. To pose the character I used masking and unmasking the desired area and then rotating those parts.

Since it’s a stylized character I didn’t use any crazy setting on the materials. However, to color correct the textures, I used color correct node and output node in material editor. In the industry I use these 2 nodes quite often to save time and avoid going back and forth between the texturing software and 3ds Max. Also, I painted a map for the wings to give them a little subsurface feel and attached it to the amount slot under Sub-Surface Multiple Scattering roll-out.

I used the good old 3-point lighting, however to make the lighting more interesting, I used colorful lights for the Fill light and backlight. As shown in the image below I have 3 main big lights, I left the spread for each of these 3 lights to the default of 1, so each light can illuminate a large area of the character. Then I duplicated and resized Key light and Fill light, reduced the spread to get the desired highlights. I also added one light specifically to illuminate the eyes and nothing else in the scene.

Once I was done with the render, I needed to composite the final render with a background. The skulls from the original concept would make the final result very noisy, and would distract the eyes of the viewer. So, I decided to go with a little bit of paint using a cloud brush in Photoshop, to give the render more of a background story. A dragon flying above a bonfire while eating his dinner.  To keep the contrast and make sure the viewer’s eyes are still attracted to the head of the dragon, I made the upper side of the background darker. Once done, I cropped my final image, so the eye of the dragon falls on the upper right third of the frame.

Some people might have struggle exporting maps from ZBrush. I use multimap exporter with the settings you see on the image below.

Output node to save time

Working in the industry, at times I’d have to adjust the overall colors of a texture. To avoid going back and forth between 3ds Max and Mari, I use Output node in material editor. 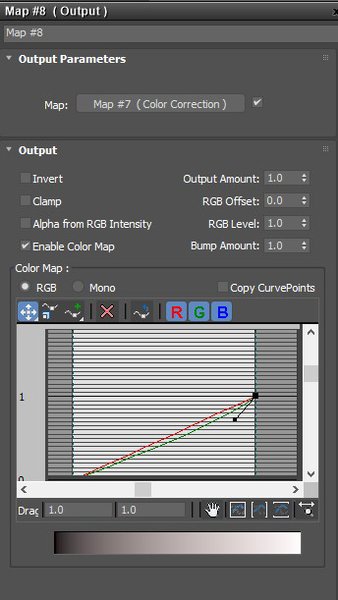 Use of Output Node

Bad lighting can ruin an amazing work. It’s important to light your scene or character in a way that each light directs your eyes to a path that eventually leads to the focal point. Start with the backlight, then add a Fill light, you want these to be subtle so when you add the Key light, the character won’t be over exposed. 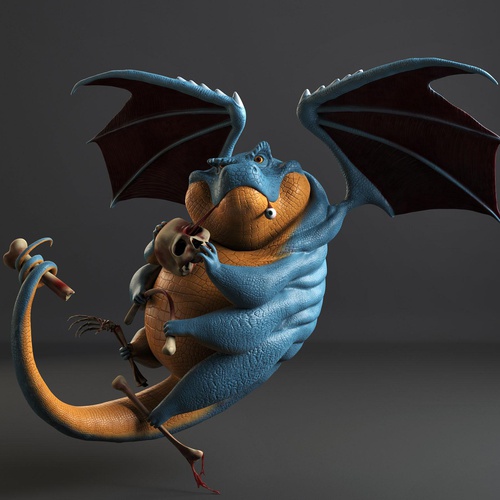 Before (A Boring Lighting) 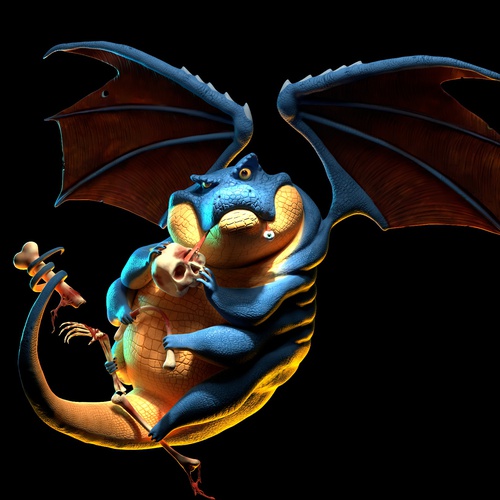