In this making of I will take you through my process of character creation, and hopefully you can get something useful from the result! Although this particular project started as a speed sculpt, meaning I didn’t really plan it upfront, I will still treat it as a full project and try to explain every step of it.

For me, each project starts with an inspiration. Usually by browsing Pinterest, Artstation, or 3dtotal. There are so many talented 3D and 2D artists out there, that once I see a character I can’t take my eyes off, I instantly get inspired and can’t wait to start sculpting something similar.

Usually I start gathering references of faces, poses, anatomy, and general feel (for this project I didn’t nail things until a later stage, when I decided on the direction I was going with it). In this case I started gathering Japanese folklore references, females with appealing faces, references of Japanese style demons, samurai, and so on. In case you are not modeling from a strict concept, but rather have a general idea, it’s important to not limit yourself to only one main concept, but try playing around with what feels best for you at that same moment. If you feel that you need to change something, go ahead, don’t be afraid! I changed it twice, from an initial modern looking girl to a samurai female, to eventually an Oni Girl (I have a thing for female characters with horns). 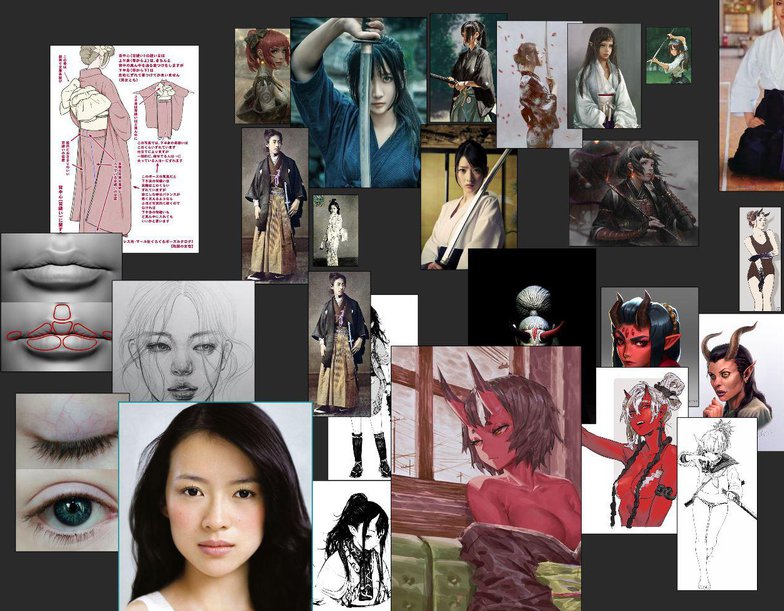 Select a wide range of references to assist you with modeling

For me it’s probably the most creative step. I get to research a lot, and at the beginning just focus on appealing shapes and features (no details in this step). After I am happy with the general shapes, I will start adding secondary shapes just to get the feel of the character. I am one of them weirdoes that poses a character before finishing all the details in T-Pose (remember to always save a T-Pose version of the character as well). I feel that this way I can work on the muscles and anatomy better, and there will be no weird anatomical deformations later on. I’m constantly juggling between ZBrush and Blender at this stage, creating some elements in each software and “assembling” the character in ZBrush for final posing. 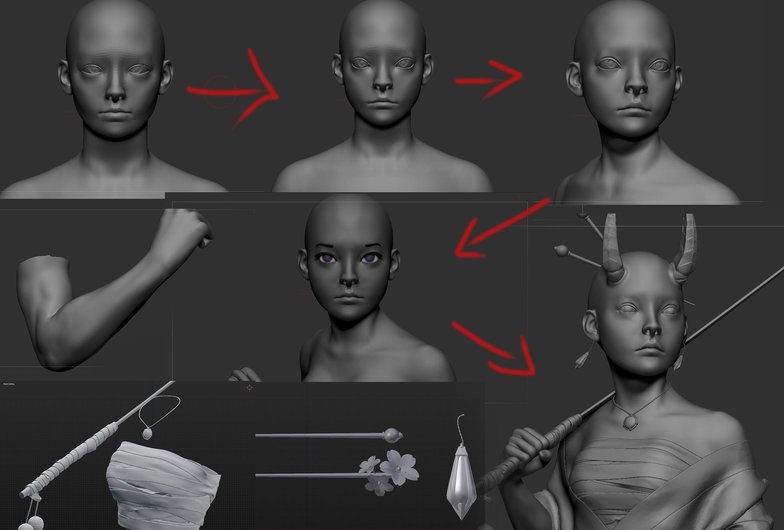 In this stage I am using Marvelous Designer, creating the base garment and exporting it to ZBrush for more details. I am creating the garment in my T-pose (from the previous stage) and then posing the clothes by importing the posed version of the character and using the “morph target” option. You can usually find good garment patterns to understand how clothes are working on different sewing and dressmaking forums. 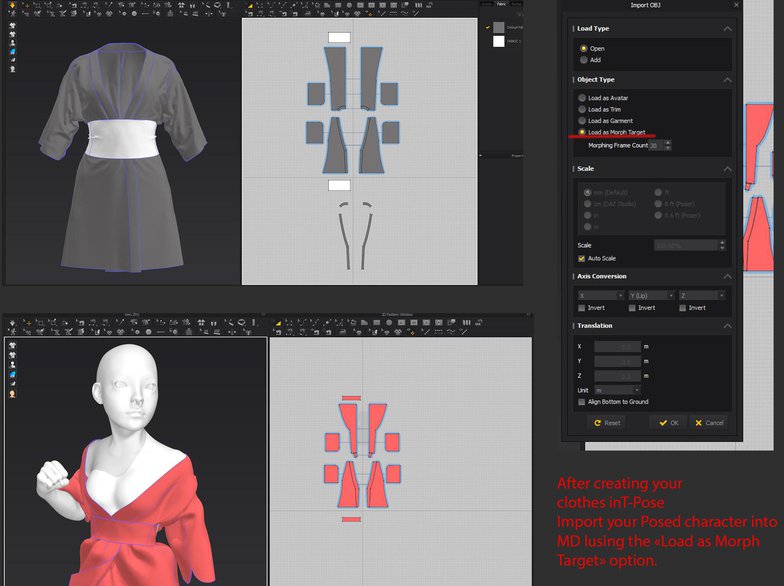 Texturing is pretty straightforward. For skin, I am using images of real people from stock photo banks or from photos I am taking myself of family and friends. The textures are applied using projection painting in ZBrush or Mari. This process also includes creating all the maps you will need later for shading. For clothes and other assets it’s a combination of textures in Photoshop and procedural textures in the rendering engine of my choice, usually Cycles in Blender or Corona in 3ds Max. 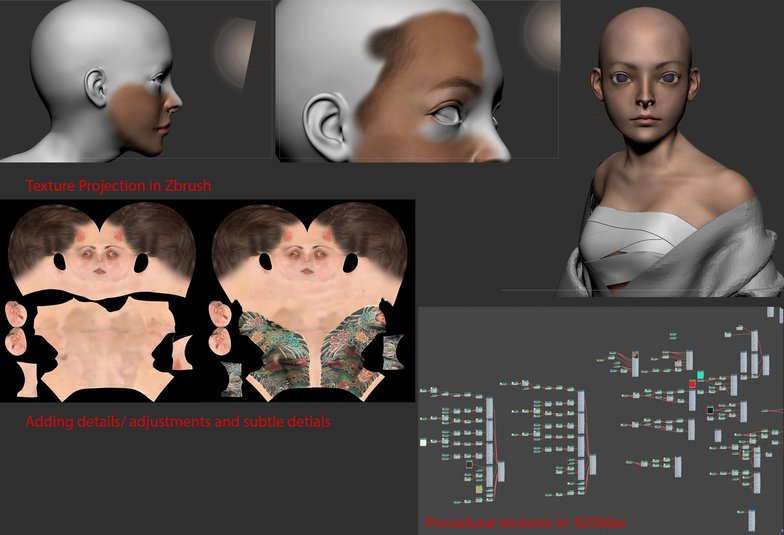 Hair creation is a fun and very challenging process. I am starting by sculpting a rough form of the hair I wish to create. This gives me the opportunity to explore many styles of hair and decide which one I like the most for this particular character. I am trying to divide the hair into three stages, creating larger clumps rather than hair strands, and finally details and flyaway hair.

For this character I used Ornatrix for the hair. I created guides in ZBrush and then imported them into 3ds Max. I combed the guides the way I liked it, and created the hair; in this case by adding a bunch of oX modifiers one on top of the others and playing with settings until the desired result. 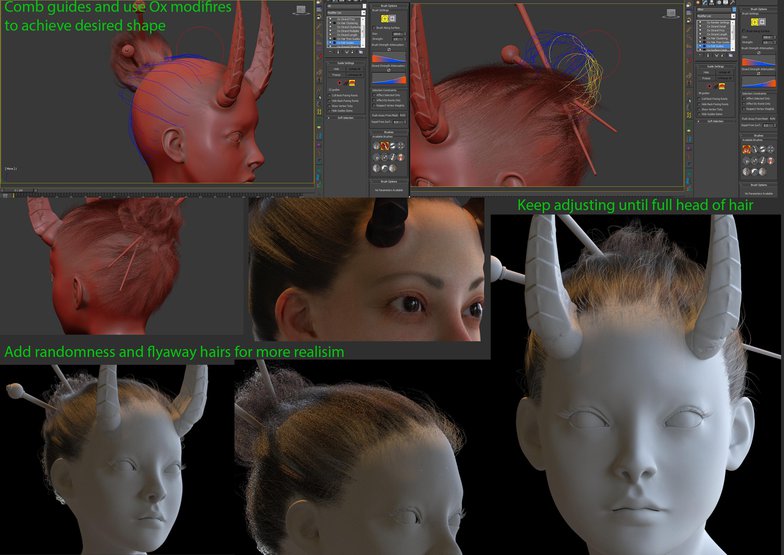 Shading is a very fun process; first I create a light setup (sometimes I even throw only an HDRI with no physical lights) for quick testing. I start with the skin. I find the Corona skin shader to be relatively simple in use, and it helps produce very nice results without getting into complex shaders. Just plug in the maps and play with values. Shading the other parts of the model is fun as well, I usually go with my imagination on this one, and just play with materials, textures, and shaders until I find something I am happy with. I then go and adjust the lighting and try to fix any last issues I might notice after a test render. 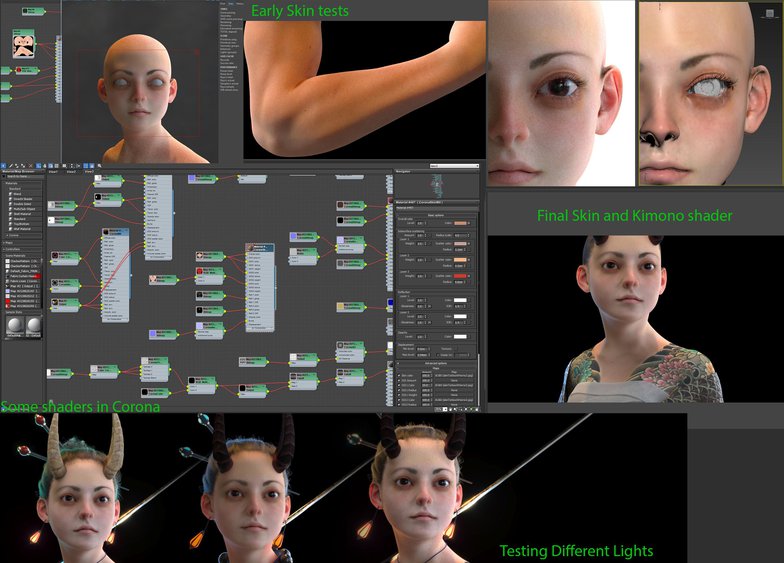 This is the final stage, and usually the quickest for me, as I try to produce a render that will not require much post processing, but only some minor color adjustments and maybe adding some smoke and particles in the background (like in this render). Again, just play with the image until you are satisfied, but try not to overdo it to not lose details. 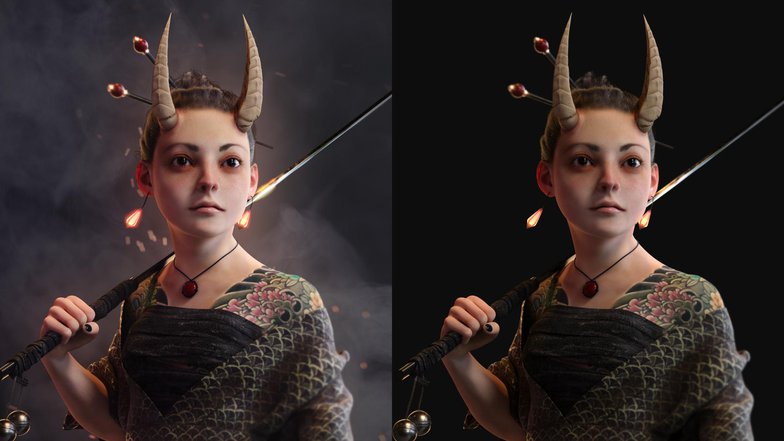 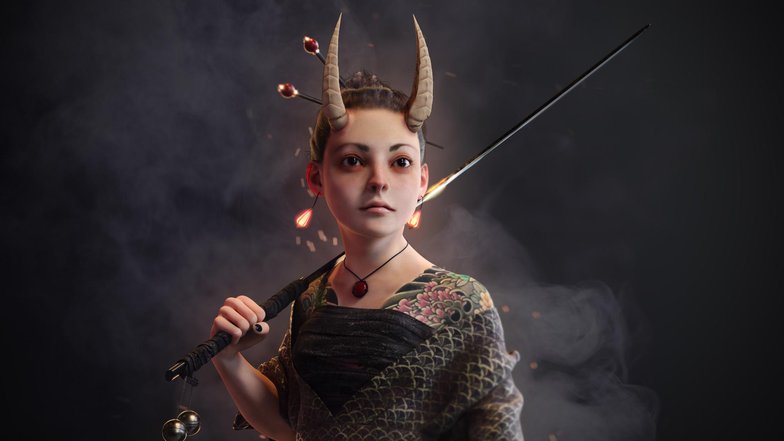 Start slow: Start slow with basic shapes and an appealing silhouette from all angles. No need to rush into details right away.

Be open for changes: If it’s not a production piece for a specific project, or you have a strict concept you are trying to follow, don’t be afraid to change the idea midway. Don’t get stuck on a bad idea that doesn’t feel right just because you have decided this way from the beginning. Be flexible when needed.

Use different tools: Try using and learning different tools for different steps of the model creation, don’t do everything in one software. Each tool has its stronger and weaker sides, learn to mix them up.